The award-winning Canadian-Czech singer and composer Lenka Lichtenberg was going through her mother's effects in 2016 in Prague when she made a startling discovery. She found two small notebooks that belonged to her artist grandmother, Anna Hana Friesova (1901-1987). Inside each notebook, small enough to fit into a back pocket, were poems written while she was imprisoned in the Terazin (Theresienstadt) concentration camp during WWII. 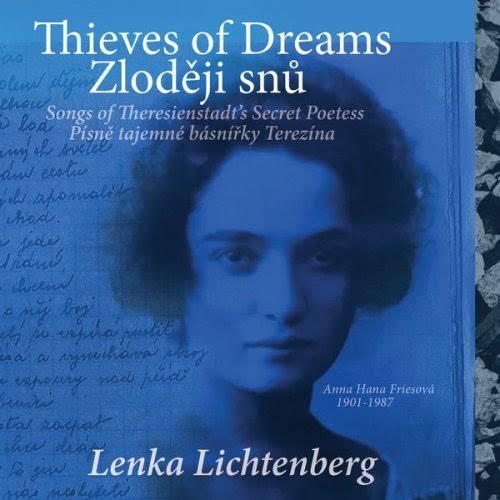 Lichtenberg, who was born in Prague but settled in Canada in the 1980s, decided to record the poems for "a music project spanning eight decades and three generations". The result is Thieves Of Dreams: Songs Of Theresienstadt's Secret Poetess, Anna Hana Friesova 1901-1987 (Six Degrees), a haunting set of musical gems.

The singer, a cantor and chazanit as well as a folk singer, has released eight studio albums, including Songs For The Breathing Walls, which garnered her a Canadian Folk Music Award in 2012; she sings in six languages (Czech, English, French, Hebrew, Russian and Yiddish). She is well-known for working to rebuild Jewish life in the Czech Republic.

She commissioned seven Czech and Canadian women composers to create a diverse musical soundscape for the songs so that the music for each one moves seamlessly between a string quartet, beatbox, spoken word and central European jazz grooves.

In the liner notes, Lichtenberg mentions that her mother wrote about her experiences in Terazin in a 1996 book, Fortress Of My Youth but apart from that neither her grandmother nor her mother talked about the hellish experience they went through. Perhaps they were too busy living to talk about the deaths they saw. Indeed, what is striking about the poems is that they mostly talk about the dreams and fantasies of Friesova's life at that time. The poems formed a world she could escape to and dream about.

Only one song really deals with the awful pain of knowing that tomorrow your loved one will be gone. In It Was A Cold Dusk, My Love, the poet describes the final moment she spends with her husband, although no names are given. It is clear what she is talking about. Her husband, Richard, Lichtenberg's grandfather, had managed to find work in the camp bakery but eventually, he was sent to a gas chamber in Auschwitz. The lyrics are so sad: "It was a cold dusk, my love/When we were saying our goodbyes/with aching hand/and dead word/ With our last tear, the final darkness fell/And good couldn't see our faces/ The end fell into our eyes like a stone onto a mirror/ Only the wind wanted to know what was going on".

There are several other love songs that offer hope, such as Then, Miracles Could Still Happen, while My Paradise Of Solitude builds an imaginary world that she could escape to. And then there is the masterpiece of the album, I Have My Own Grief, which features a recording of Lichtenberg's mother, Jana Renee Friesova, talking about how they were forced from their home and transported from a place of happiness to a place of death, and her grandmother's poem which she sings, thereby bringing together in one song, the three generations. I found this song moving. And the poet's feelings about the betrayal her family felt are succinctly rendered in the angry but ultimately hopeful, I Wanted To Curse You, Bitter Land.

In the liner notes, Lichtenberg dedicates the Thieves Of Dreams to her grandmother ("Terazin's secret poetess") and her mother, and also to the 6 million who "were murdered and never got to share their stories with the world".

In the final stanza of Don't Ask Me, My Love, the secret poetess has these salutary words to say: "Don't ask me, my love: 'How are you feeling?'/ To that I have my own answer:/ Let such a question come not from a killer, but from one who heals".

A song from the album, Waiting At The End Of The Alley, has been uploaded to YouTube, with English translations of the lyrics. Many thanks to Dan Rosenberg for the information and a copy of the album, which is available from the usual online sources. More information at lenkalichtenberg.com and sixdegreesrecords.com.