A push for sustainability

Environman co-founder and content director, Romtham Khumnurak, is on a mission to clean up the environment

In 2014, Romtham Khumnurak -- a student at the Faculty of Liberal Arts, Thammasat University (TU) -- enrolled in TU 100 Civic Engagement, which required students to observe TU's waste management system. After Romtham saw a large stinky garbage pile there, it dawned on him that everyone is involved in the waste issue. Five years later, Romtham and five other colleagues established an environmental online media, Environman, which currently has more than 564,000 followers and is available on several platforms such as Facebook, Twitter, Instagram and YouTube.

"Before I went to see TU's waste management system, I was not interested in environmental issues. However, after I saw the garbage pile, I realised that there was trash from me in that pile. After that, I came across many environmental issues such as plastic and air pollution. I later changed my behaviour and began to use less electricity and water, reduced waste and reduced meat consumption. I believe that knowledge can lead to sustainable change, so I want to make environmental content accessible to everyone," said Romtham, co-founder and content director of Environman.

Environman provides updates about environmental news around the world, as well as reports on other issues such as social, lifestyle, space, technology, and art. Thanks to its informative and useful content that has had a positive impact on the environment, Environman was recently awarded Best Influencer Performance on Social Media in the Change Maker category at the Thailand Zocial Awards.

"It was beyond our expectation. We did not expect that Environman would create a ripple or change. We are proud to have come this far. Besides receiving the award, another thing we feel proud of is how many students have applied for internships at Environman. This means the new generation wants to push environmental issues with us and we also get new ideas from them," said Romtham.

Life spoke to Romtham about the content of Environman and environmental issues.

How did you come up with the name Environman?

It comes from the word 'environment'. Thais talk about the environment, and about everything surrounding us, but not the people. We wanted to emphasise that people are a part of the environment too. We must rely on one another. Anything people do will affect their surroundings and vice versa. The word Environman can mean sustainable environmental problem-solving.

How do you present the content and why do you include other issues besides the environment?

We divide content into two main categories -- problems and solutions. We present solutions from local and international sources, so our followers can see various solutions. We want to raise awareness and update followers about how people around the world handle environmental issues. We include other issues in Environman because making a change involves issues of economy and society as well. For example, we cannot ban affordable plastic bags used for soups and curry because vendors still need plastic bags to sell and make a living. We also share technology news in Environman because innovation and technology play an important role in solving environmental issues.

What do you think are three important environmental issues currently?

Pollution is the second significant environmental issue. The World Health Organization reported last year that air pollution killed 7 million people. Meanwhile, plastic pollution affects wildlife and sea life. The meat of these affected animals turns into microplastic, which is then consumed by people. At an assembly, the United Nations agreed to form a plastic treaty to tackle global plastic pollution.

Climate change and global warming is the third significant issue which is a result of the first two issues. The 2015 Paris Agreement set a goal to maintain warming to not over 1.5C to 2C. If the world warms over 2C, there will be more severe disasters, especially an increase in sea levels and flooding which may cause some cities to disappear.

How do you help the environment with your routine?

In order to reduce waste, I carry my own bottles, glasses, lunchbox, and cloth bag. I separate my trash into two bins. The first bin is for dry garbage, so it is easy for collectors to sort waste and recycle while the other bin is for wet garbage or food waste which I usually bury in my garden. I save electricity by not turning on the air conditioner at night and save water by using it when necessary. I take public transportation as much as possible and reduce eating meat because livestock farming causes climate change. 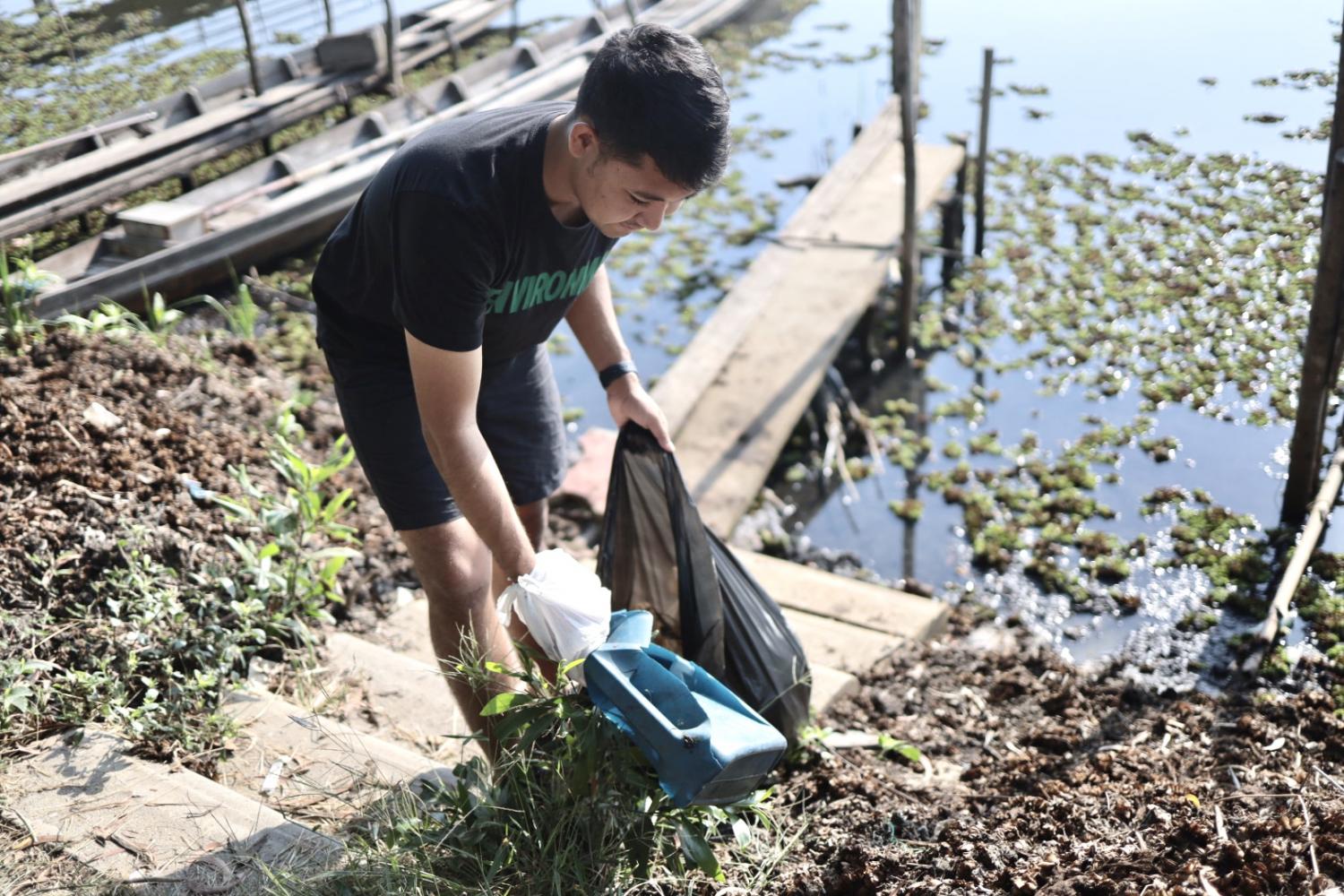 Why don't many Thais change their behaviour to help save the environment?

Consumer behaviour is only one part of environmental issues. Two more parts are the producers and governmental agencies. If a producer changes its packaging to be recyclable, this can cause a huge impact on the environment. How do we make the producer change their behaviour? We have to raise their awareness and the government must have environmental measures in place for producers. Also, the government must have measures for solving plastic pollution, the greenhouse effect, and climate change.

What do you think about electric cars?

It is a popular topic in Environman. There is no perfect innovation, but electric cars have no emissions and pollution and reduce the use of fossil fuels. Electric cars can help solve problems of pollution and climate change. However, there will be many batteries from electric cars that will be difficult to dispose of. We have to discuss how to charge electric cars conveniently, so the number of charging stations must be increased. There should be tax benefits for buying electric cars to persuade drivers to use them instead. We must encourage electric public transportation to be used nationwide as well. Last, we also have to think about what we should do with the old cars.

Has the Russia-Ukraine war affected the environment?

What is the best thing about being a part of Environman?

We have become a link between governmental agencies and private sectors that has led to environmental change, which is important to me. We help people to understand environmental issues, which can lead to sustainability. We want to be a learning platform outside classrooms and workplaces. Do you still have hope to make the environment better?

Many issues become worse and some issues do not receive the attention they should, such as the greenhouse effect, waste pollution and loss of resources. However, with our push, we have seen gradual change. Many private producers have changed their packaging to be recyclable. The government also has measured ways to dispose of waste, ban plastic and have a goal for net zero-emission. We have many online projects to inform people to send trash to be recycled at companies that receive them. We also organise events 'Friday For The Future' and 'The En Day' which collaborates with private corporations and government agencies to hold seminars about environmental issues and organise exhibitions. The events have had a lot of positive feedback. People at Environman always have hope since what we do creates changes at both the individual and organisational levels.