Ukrainian soldiers and defenders of freedom who died or were killed in the Russia-Ukraine war are being honoured in an art exhibition sponsored by the Ukrainian embassy.

The exhibition "Ukraine Is The Cradle of Heroes" is on display at the Bangkok Art & Culture Centre (BACC) and consists of three themes -- "An Epic Story Of Heroism" by illustrator Oleksii Chebykin; "Flames Of War And Rays Of Light" by photographer Dmytro Kozatskyi; and "Motanka -- A Spiritual Guardian" by painter Marta Pitchuk.

Oleksandr Lysak, chargé d'affaires of the Ukrainian embassy, said at the recent opening ceremony the exhibition is the best way to help people understand Ukrainian identity.

"Art is one of the ways to answer the key questions, 'Who we are, and where do we belong?'. The exhibition combines old national symbols with new heroic figures and is a blend of a modern cultural vision of reality. The artists intended to trace the connection between Ukraine's past and present -- in glory and in sorrow," said Lysak.

Olga Rusova, the embassy's second secretary, explained that these three artists were selected because themes of their artwork have a connection to Asia. One of the artists, Oleksii Chebykin, was at the exhibition opening since he was already in Bangkok. The exhibition also presents universal themes that every country has regarding heroes -- past and present.

Chebykin is best known for creating high-quality comics and cartoons about the Cossacks, which is the name of Ukrainian warriors who by the mid-16th century developed a military organisation with democratic values. 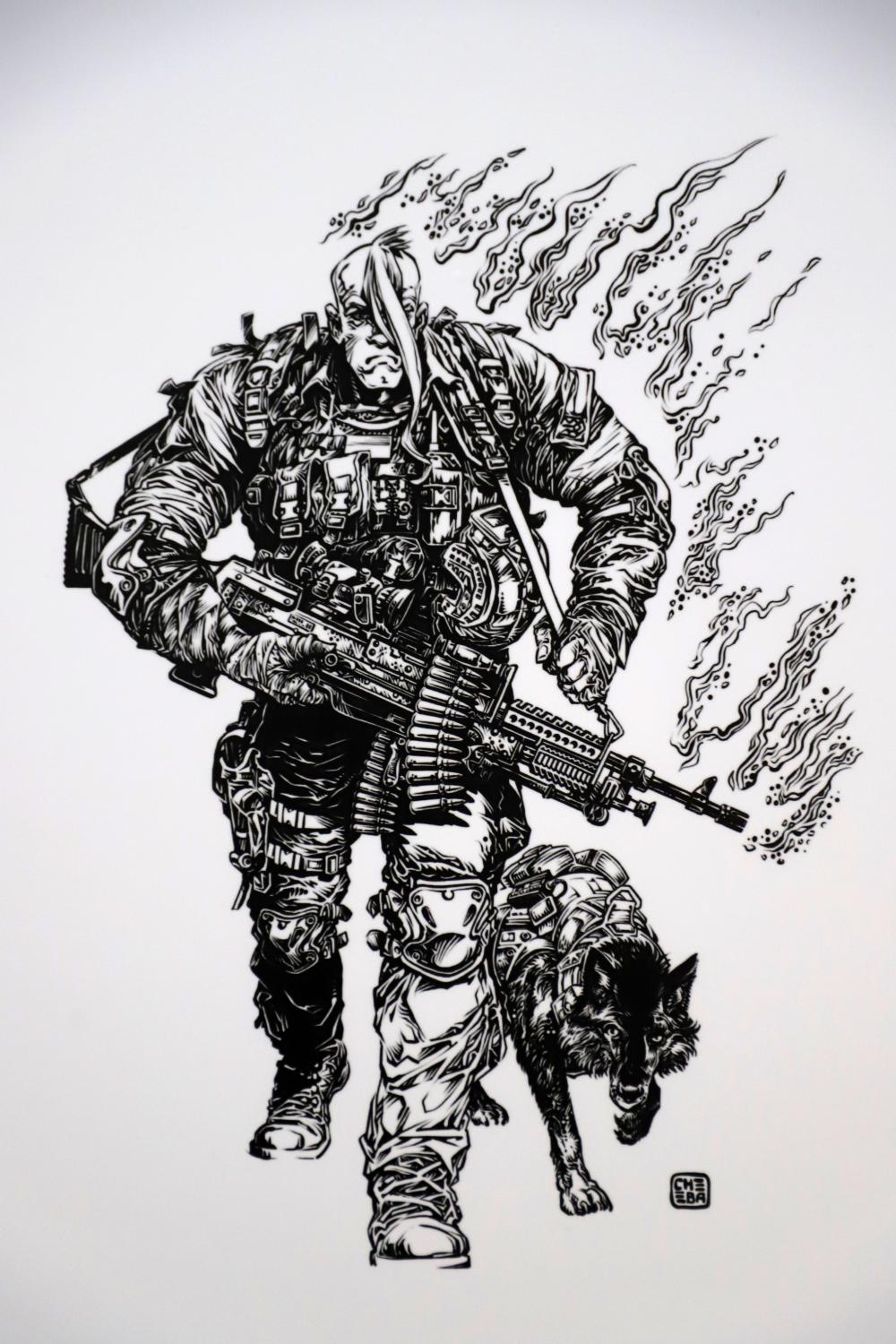 Some illustrations for 'An Epic Story Of Heroism' were inspired by the Russo-Japanese War. 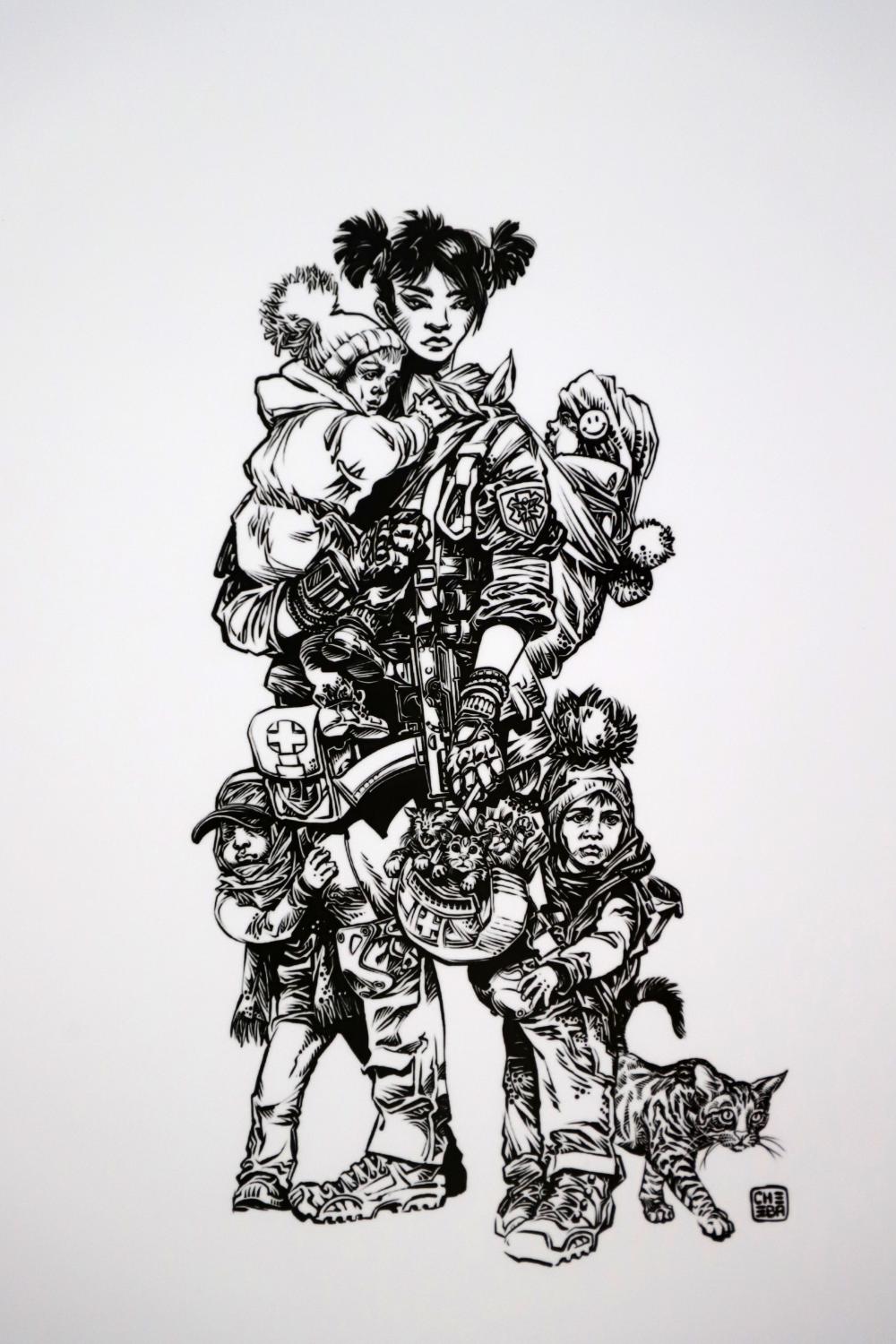 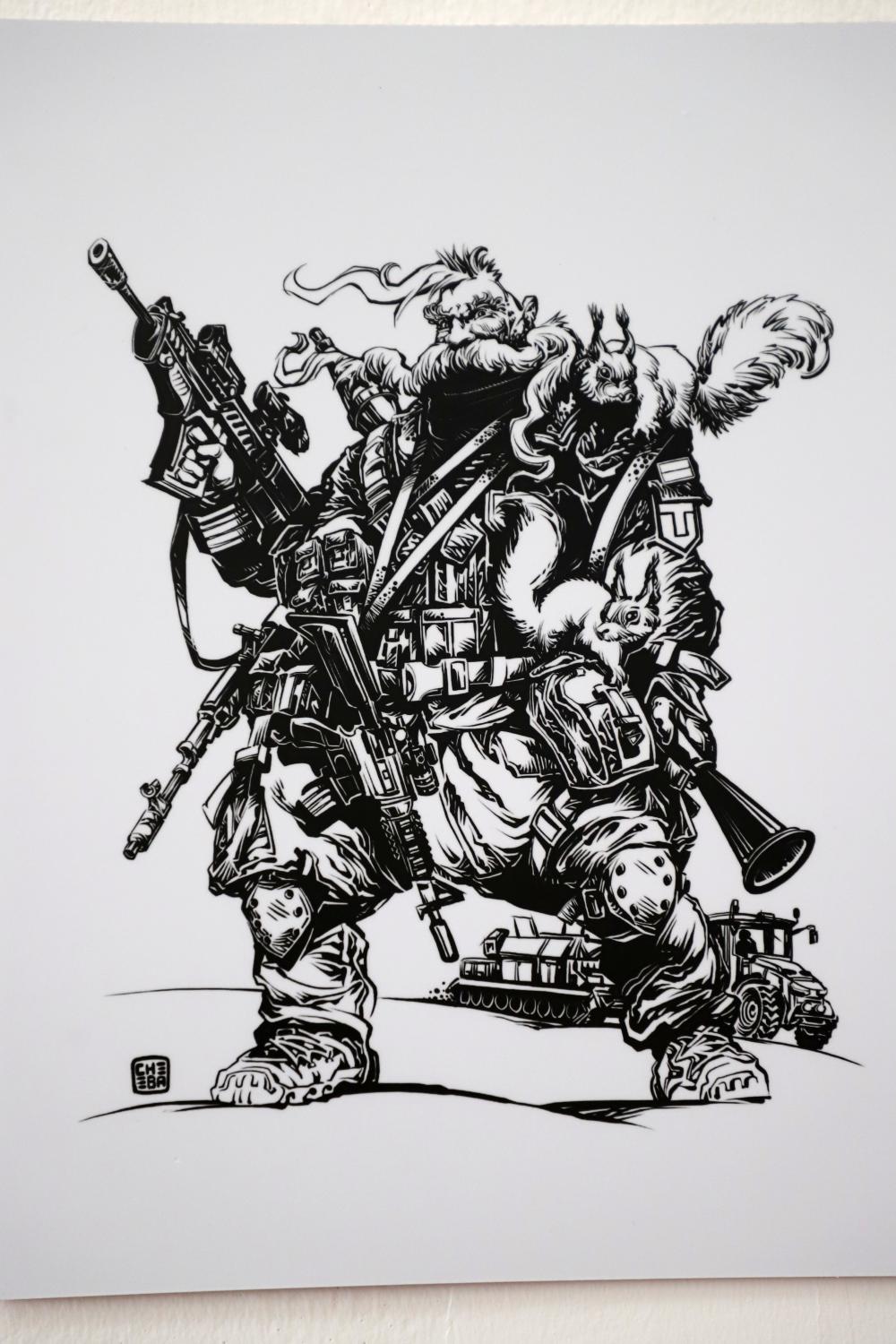 "Cossacks are knights of justice and defenders of freedom. Chebykin was inspired by the Cossacks' vital energy, courage, strength and fearlessness. In his artworks, Chebykin glorifies the Cossacks and presents them as a national brand for worldwide promotion," Lysak said.

Chebykin studied at the Ukraine Academy of Art, eventually becoming a member of the Association of Ukrainian Artists, which is a significant organisation in the Ukrainian art industry.

He told Life through a translator that this is his first exhibition since the war broke out. Chebykin said that he had created many illustrations about the Cossacks because of their rich history in democratic traditions and their symbolic attachment to Ukraine.

"I decided to represent Cossacks because in the past, these people defended Ukraine. It is important to present my illustrations in Thailand since we have common interests and values. Thailand passed through hardships and struggles to achieve its current independence. And that's what is happening now in Ukraine. We are fighting for our nation. In addition to the Cossacks, I included illustrations of other topics. Some illustrations embody ancient Indian history that represents good against evil for fairness in the world," Chebykin said. 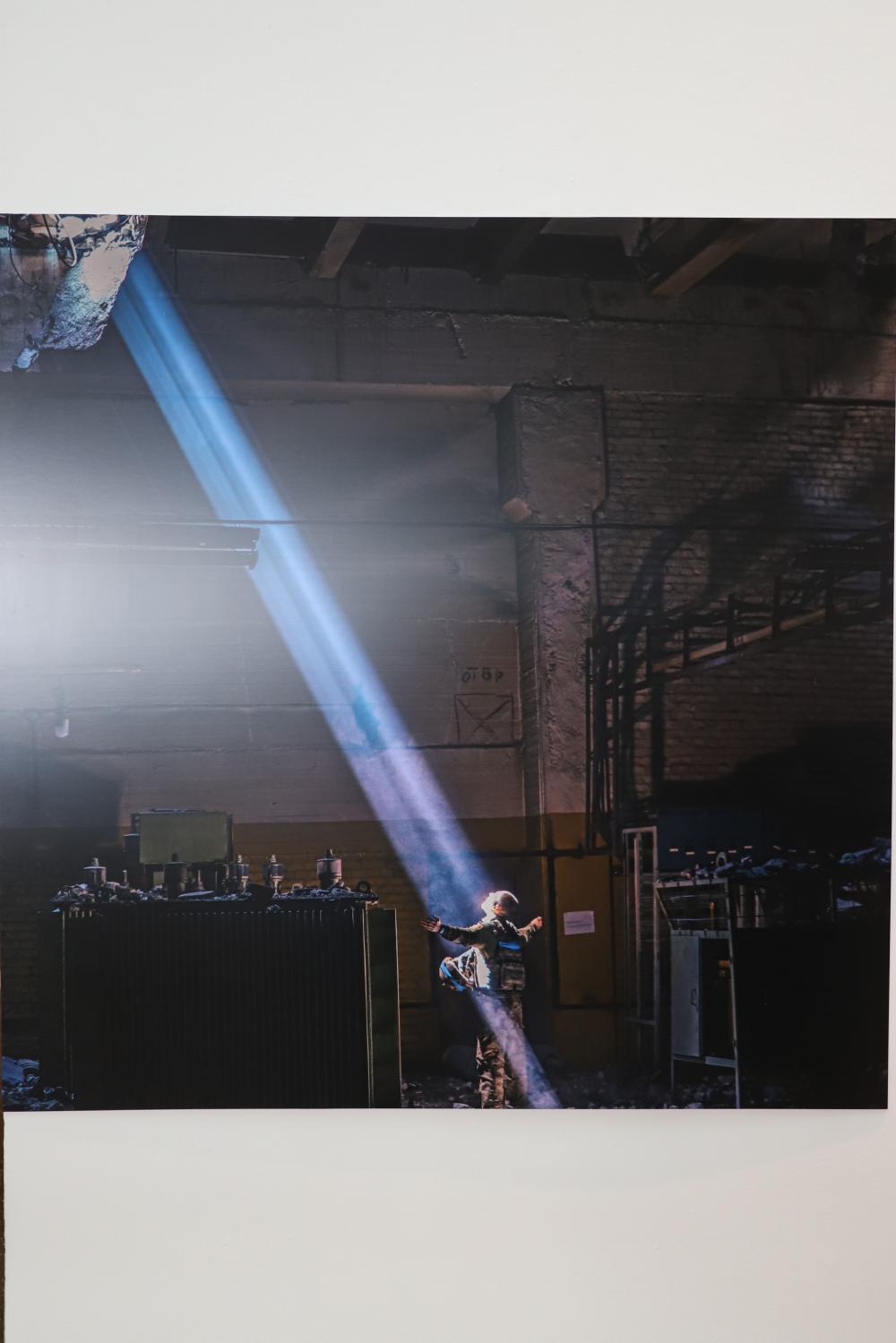 Dmytro Kozatskyi's acclaimed photo of a soldier under a ray of sunlight.

Among his illustrations are a series inspired by Catherine Desnitsky, a Ukrainian woman who married Thailand's Prince Chakrabongse Bhuvanath. Chebykin is in Thailand studying the history of Desnitsky and the prince, hoping to receive financial assistance in order to publish a book on the couple.

The four paintings in the "An Epic Story Of Heroism" were inspired by the Russo-Japanese War in 1904-1905 and chronicle the story of Taras and his Japanese paramedic girlfriend Orisan who defend the Ukrainian land against Russian encroachment. Their struggle mirrors the struggle of all Ukrainians, the artist explained.

"Aside from illustrations, I make a living by releasing between 20 to 30 books in Ukraine, the US, France, Belgium and other European countries. Dao Gopak is the most popular book, which consists of three series. Gopak is a military term that means combat dense with Ukrainian forces," Chebykin said. "I am thrilled to have an opportunity to showcase my illustrations in Asia. I hope this will lay a foundation for further exhibitions and book presentations."

The second collection, "Flames Of War And Rays Of Light", is by photographer Dmytro "Orest" Kozatskyi, a fighter in the Azov regiment and one of the defenders of the city Mariupol. For more than 80 days, Kozatskyi and his compatriots defended the besieged Azovstal Metalworks in Mariupol. His acclaimed photo of a soldier under a ray of sunlight conveys to viewers that darkness will be defeated and the resistance will never be forgotten. 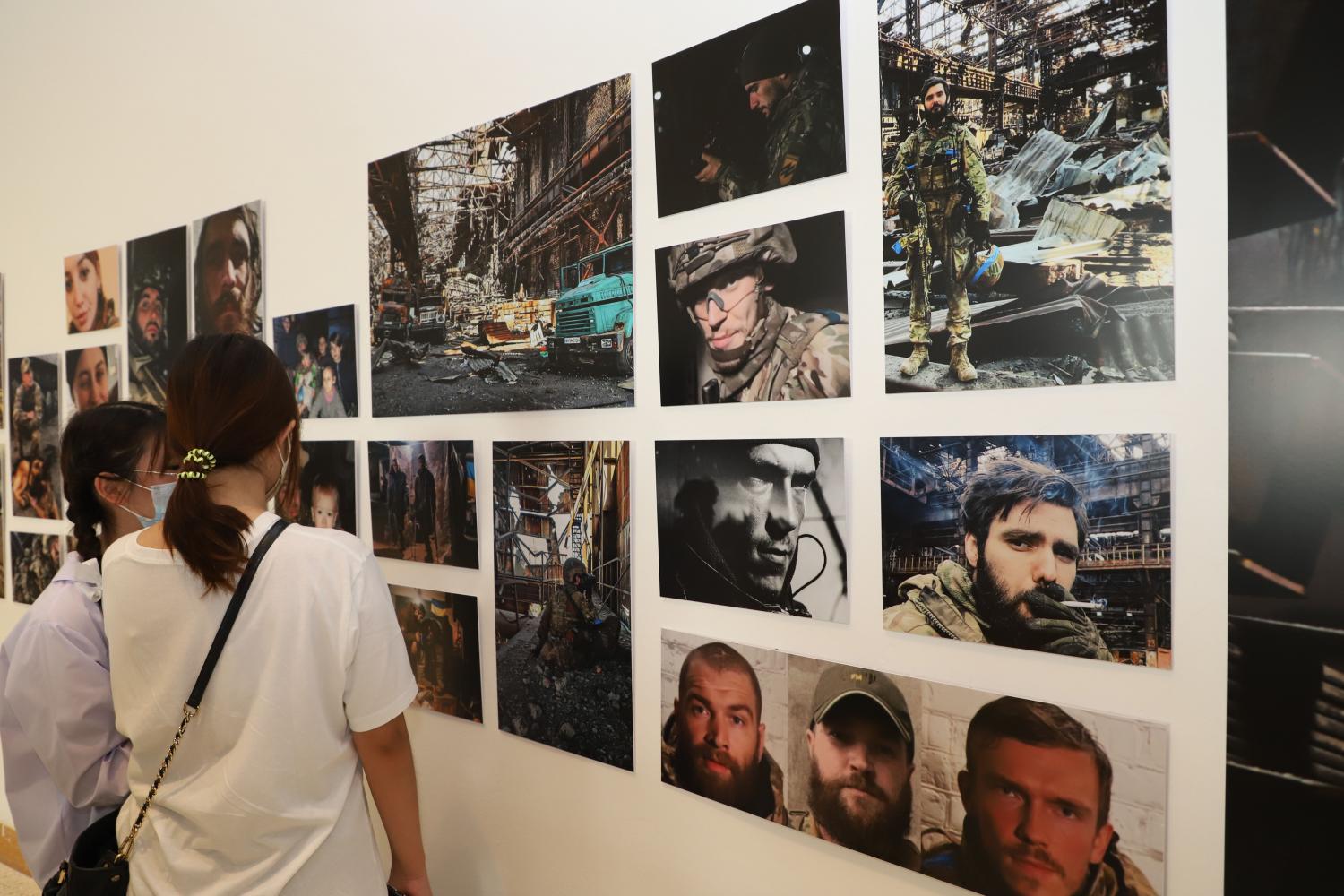 'Flames Of War And Rays Of Light' by photographer Dmytro Kozatskyi.

The final component of the exhibition is "Motanka -- A Spiritual Guardian" by Ukrainian artist Marta Pitchuk presents in a series of paintings the Motanka doll, an ancient Ukrainian talisman, as a missing link between the past and the present. The Motanka doll is faceless -- the cross between her eyes symbolises unity between Heaven and Earth, the four cardinal points, the four seasons, and the Sun. Pitchuk's artworks draw parallels between Ukrainian ancestral heritage and modern reality, reviving sacred images and their meanings.

Nataliia Beshta, one of the key exhibition co-ordinators, said at the opening ceremony that the current war is not of Ukraine's making.

"This is not the war of Ukraine; Ukraine was forced to defend itself. Russia invaded Ukraine on Feb 24, 2022, and it was a full-scale military invasion. One of my friends, the former ambassador of Ukraine to Vietnam, was in Ukraine at that time, so he decided to take up arms to defend our country. He now is in the hospital with injuries. Please do not forget about people who have already passed away and people who are kept as hostages in the Russian Federation. Please remember Ukraine and please help Ukraine," Beshta said.

Thai people can donate to help Ukraine via the Ukrainian embassy at Bangkok Bank, account number 911-3-00456-9.

"Ukraine Is The Cradle Of Heroes" runs at the BACC until July 3. Admission is free. More information is available at facebook.com/ukr.embassy.thailand. 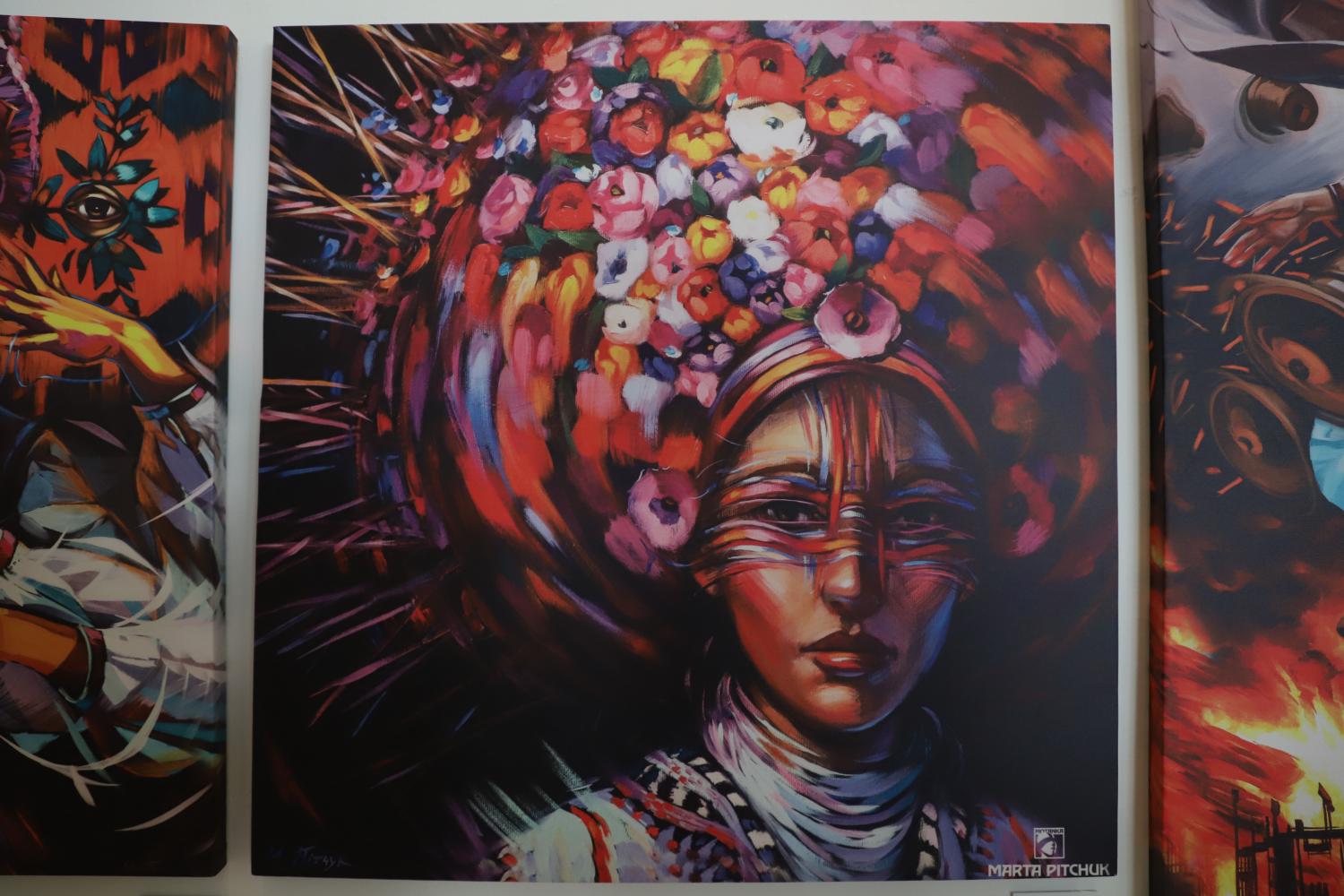 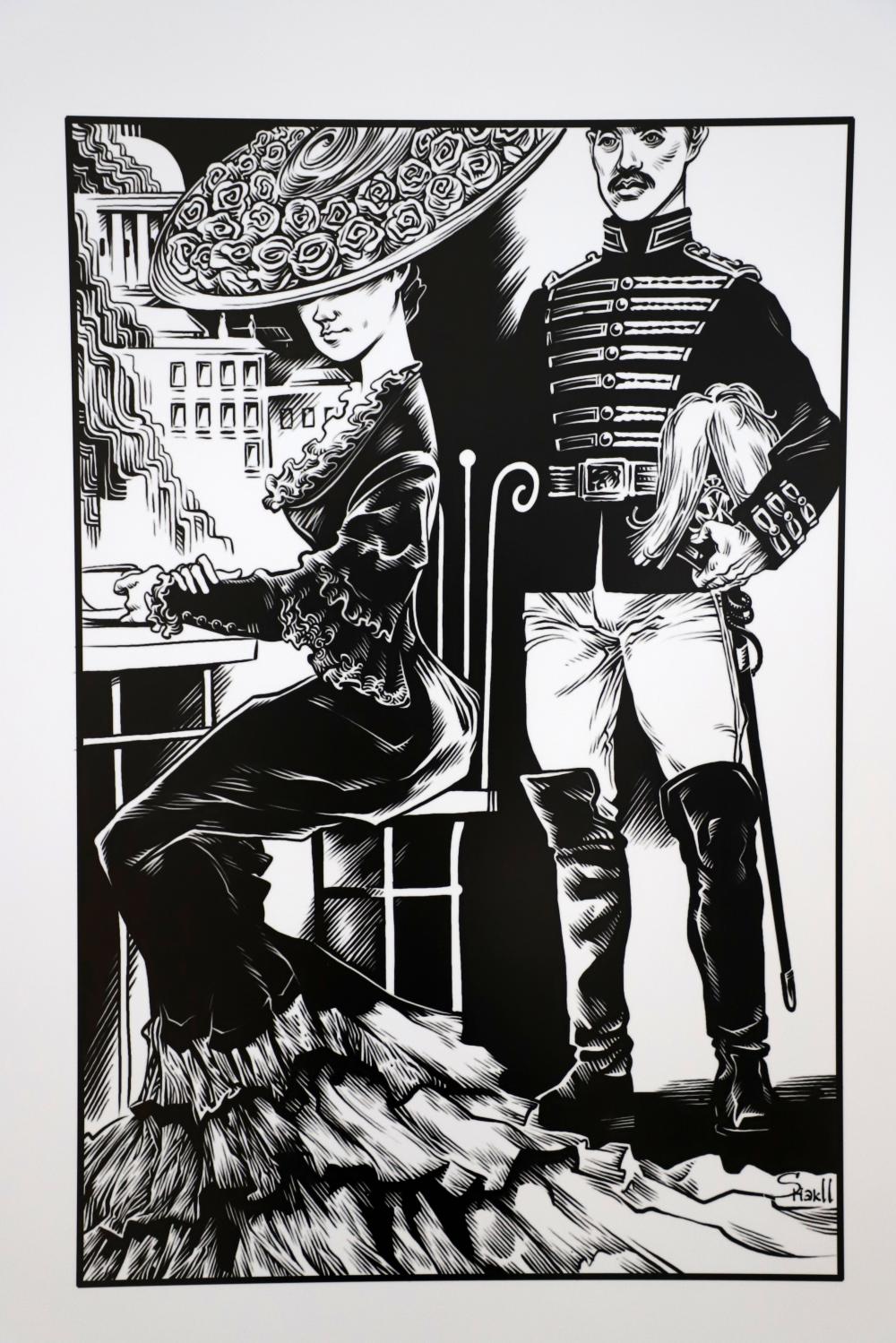 Some illustrations were inspired by inspired by Catherine Desnitsky, a Ukrainian woman who married Thai Prince Chakrabongse Bhuvanath. 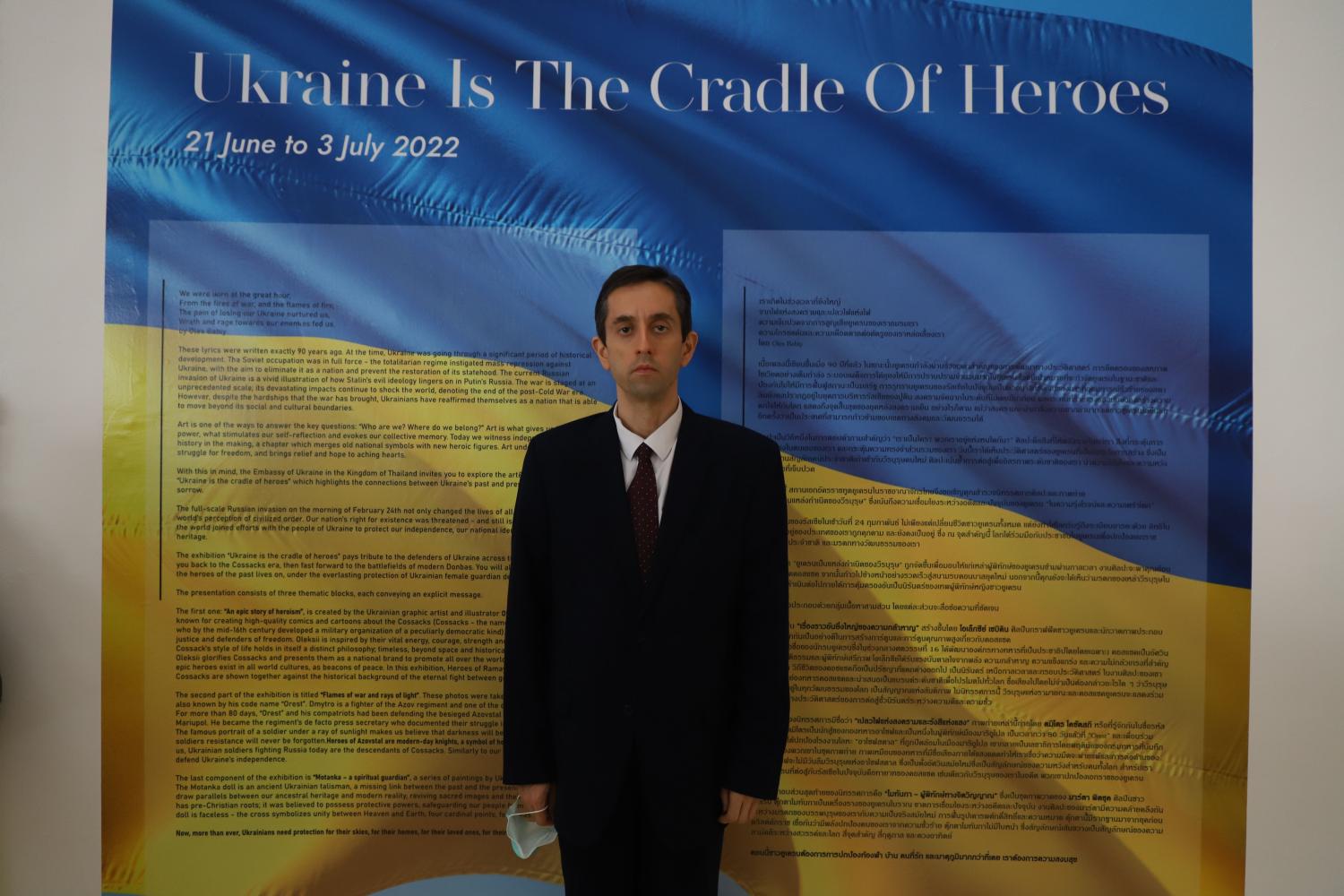 Oleksandr Lysak, chargé d'affaires of the Ukrainian embassy in Thailand.