Amateur photographer Thamarong Wanarithikul spent his Saturdays on a footbridge capturing eye-catching vehicles. His photos show common scenes people see on the streets but do not take time to scrutinise. Photos of a truck decorated with lights on its front, a three-wheeled motorcycle carrying various sizes of brooms and motorcycles carrying things like tyres, orange traffic cones and fruits in plastic bags are showcased at the exhibition "Footbridge" at 6060 Arts Space. The highlight of the photo series is colourful Vespas carrying various loads, which recently scooped Silver Winner at the Tokyo International Photo Contest 2021.

"This was my first international award and I am thrilled to win it. As an amateur photographer, I did not expect to win the silver award. I participated in this contest because I sent photos of Vespas to many galleries, but there was no feedback. Due to the contest, I learned how to write a description to give meaning to the photos," Thamarong said.

Thamarong's interest in photography started 10 years ago. He went to a store to buy a compact camera, however, the salesperson convinced him to go for an SLR and zoom lens. After Thamarong returned home with a Canon EOS 40D, he searched online about how to use it. Then, he searched for a trip that photography enthusiasts take in order to practice their skills and learn from each other.

"I participated in a few trips where enthusiasts travelled together and shared tips while photographing subjects or objects. I learned that there are no specific rules for photography. A photographer has to adjust his skill and technique to suit the situation on that day, so I decided to practice by myself," said Thamarong. 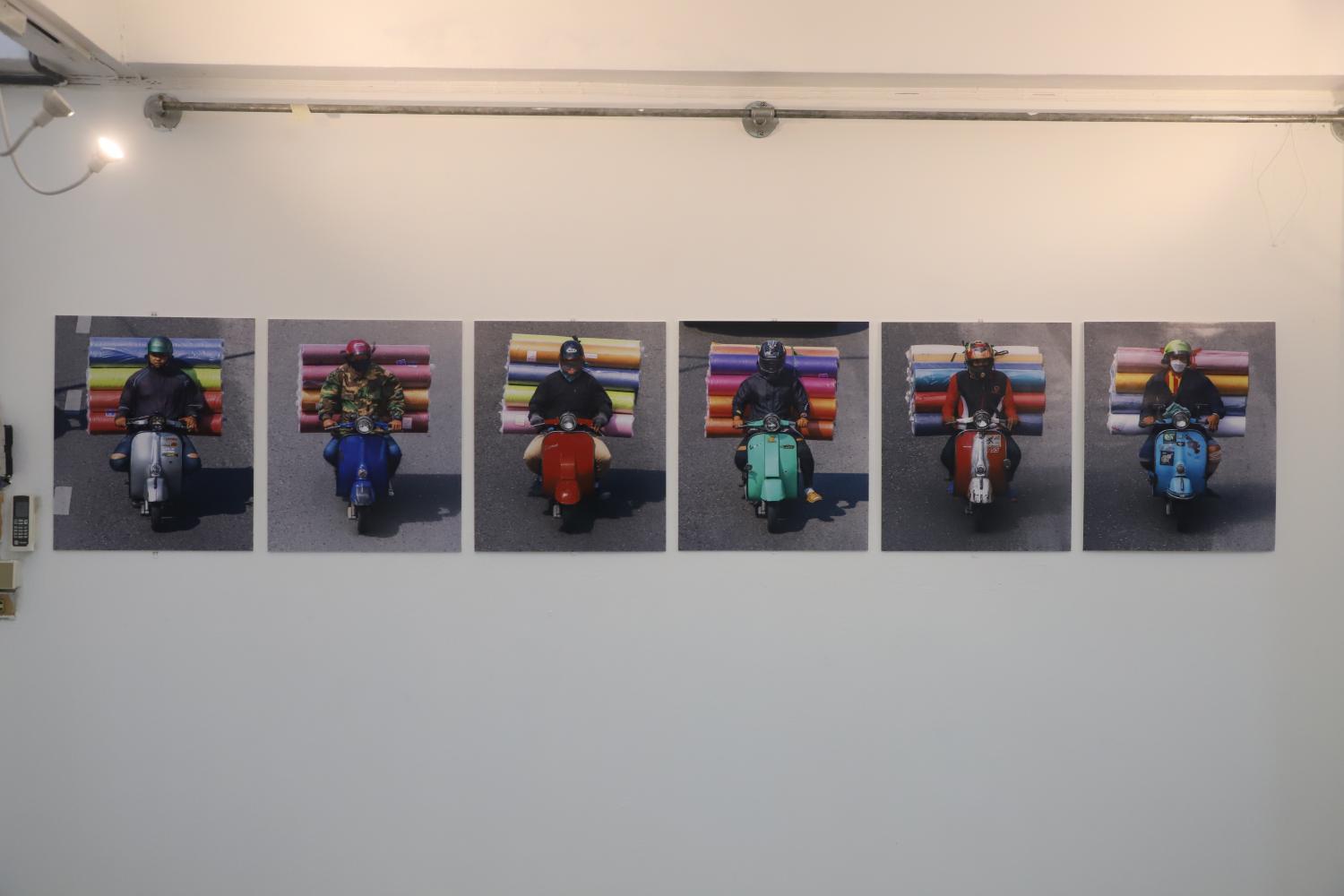 The Vespa series was Silver Winner at the Tokyo International Photo Contest 2021.

On instagram.com/thamarong and facebook.com/thamarong.wanarithikul, viewers can see that Thamarong has shot images such as landscape, portrait and street. After several years of practice, Thamarong discovered he was interested in street photography the most.

"I like street photography because there are emotions in the photos that I take and I can understand them. Mostly, I take photos that feature people and I feel connected to them. Landscape photography is easier than street photography. We find a nice location and just wait for the moment such as a sunrise or sunset. However, there is no guarantee that we will have a street photo after waiting because we do not know if the right subject will pass by. Street photographers must always be ready to capture a subject or scene," Thamarong explained.

In 2019, Thamarong held his debut exhibition "8 a.m." at Kathmandu Photo Gallery. The exhibition showcased pickup trucks from a bird's eye view. The photographer took those photos from a footbridge which he walked past to work in 2017 and sent them to many galleries. Renowned photographer and founder of Kathmandu Photo Gallery Manit Sriwanichpoom gave him an opportunity to develop and exhibit the photos.

"Manit's advice became my direction since he suggested taking photos that depict human behaviour or the lifestyle of people. Thus, I was at the same footbridge from 8 to 8.45am before I went to work and photographed subjects on the same pickup trucks every day," said Thamarong. 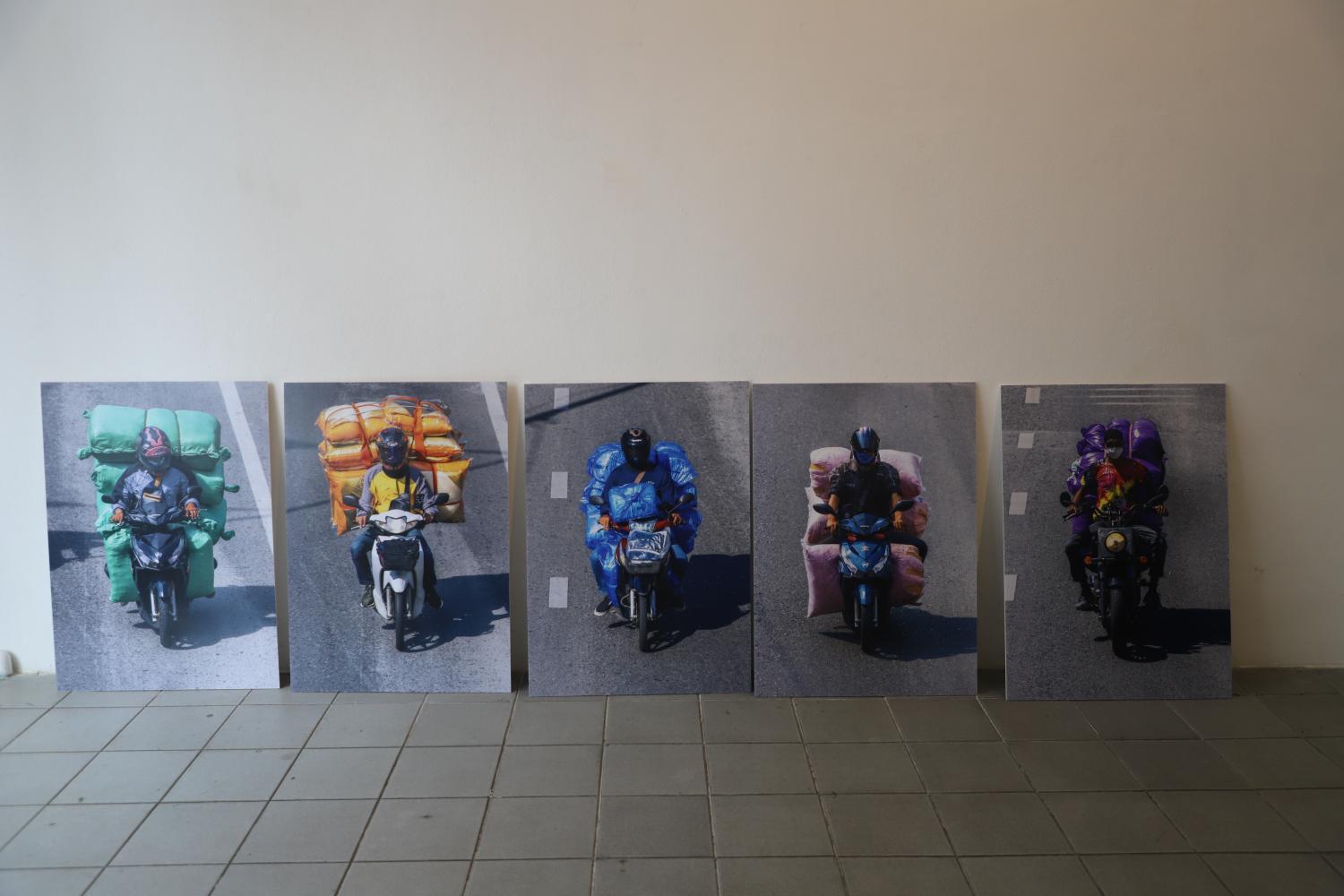 A series on motorcycles.

After his debut exhibition, Thamarong looked for another subject that he could work on. In the collection "8 a.m.", he found a Vespa in a distance in a photo. He decided to focus on taking photos of Vespas and sent them to galleries. After 6060 Arts Space contacted him, he was surprised that the gallery gave him the whole building for the exhibition.

"The collection '8 a.m.' was displayed on only two walls in Kathmandu Photo Gallery. I did not expect to have so much space for this exhibition. I had around six months to take more photos, so I photographed motorcycles, saleng or tricycles, vans and trucks that carried unusual items or had extraordinary eye-catching visuals. I took a photo of a truck that had many lights in the front because I did not understand why they had to decorate the truck like that," said Thamarong.

Although photos of overloaded vehicles are intriguing, Thamarong is worried about the safety of the riders and other people and vehicles.

"When I see riders overloaded with things, I wonder how they keep their balance. I wish they had safer vehicles to carry things. While I was taking photos, I saw some riders did not have much sitting space. Some even had a hard time lifting their foot to step on the brake," he said.

When the photographer worked on "8 a.m.", he felt connected to the subjects that he saw every day, but he did not feel that way for "Footbridge".

"I saw the same dog every day for a while. As a pet lover, I felt connected to that dog since it was thin and looked like it was very sick. However, I do not know what happened to that dog because I never saw that pickup truck again. I hope it got better. I did not feel connected to subjects in 'Footbridge' because I rarely saw the same vehicle and same rider twice," he explained.

After the Personal Data Protection Act B.E. 2019 became enforced on June 1, many people became worried that taking photos and videos of other people may violate their privacy and this may affect street photographers.

"I believe that the law stipulates that people can take pictures and videos of others if the pictures do not cause damage to anyone. Most photos I selected to exhibit do not show the faces of the subjects and if I need to, I can blur them," said Thamarong.

During weekdays, Thamarong works as an IT officer at a private company. He spends his Saturdays taking photos and he rests on Sundays. Thamarong believes photography can be a backup job.

"During the pandemic, many people were laid off, so it is better to have another option. Photography also can be my job when I retire. The earlier I start the job, the longer I have to work on it. In the past, I wasted my time watching TV on Saturday, but now, I have a goal to work on. Taking photos is something I like, so I do not feel like I am forced to work on it," he said.

For "Footbridge", he hopes visitors will discover things they may have overlooked or taken for granted.

"Photography is a kind of narration or storytelling and 'Footbridge' tells stories of things that people are used to seeing, but often do not appreciate. These photos are interesting subjects, but people do not pay attention or overlook them," said Thamarong.