When the Covid-19 pandemic first began, people were worried and panicked, however, the public health crisis was actually not the first global pandemic. In the past, pandemics such as the Black Death or the Great Plague, the H1N1 flu and the Asian Flu have killed many people.

Now on view at the National Museum Bangkok, "Arogya Panidhana" -- translated as an aspiration for humanity to be free from all ailments -- displays more than 300 items to help people understand the history of infectious diseases and analyse the current situation.

Nitaya Kanokmongkol, executive director of the Office of National Museums, said that the framework of the exhibition is under the concept of royal kindness and that it has been approved by the Thai Heritage Conservation Committee to be held from 2022 to 2026. The concept arose from a deep appreciation for the work Thai kings did to help lay the groundwork. The topics of the five-year exhibition include public health (2022); water and irrigation (2023); religions and beliefs (2024); technology, innovation and communication (2025); and education (2026).

"We think museums should help society by disseminating information to the public. We researched pandemics and pandemic management and discovered that in Thai culture, many religious rites relieve illnesses. Since prehistoric times to the Sukhothai, Ayutthaya and Rattanakosin eras, people have tried to find methods to treat illnesses. Treatments in each era were different depending on the beliefs, ideas and technologies. 'Arogya Panidhana' was organised to tell Thais that this is not the first time the world is facing a pandemic. The exhibition narrates stories through evidence," Nitaya explained.

"Arogya Panidhana" is divided into several sections -- Humans And Diseases; Science Of Healing; Wisdom Of Thai Traditional Medicine; Western Medicine In Siam; and Social Mobilisation For The New Way Of Life. 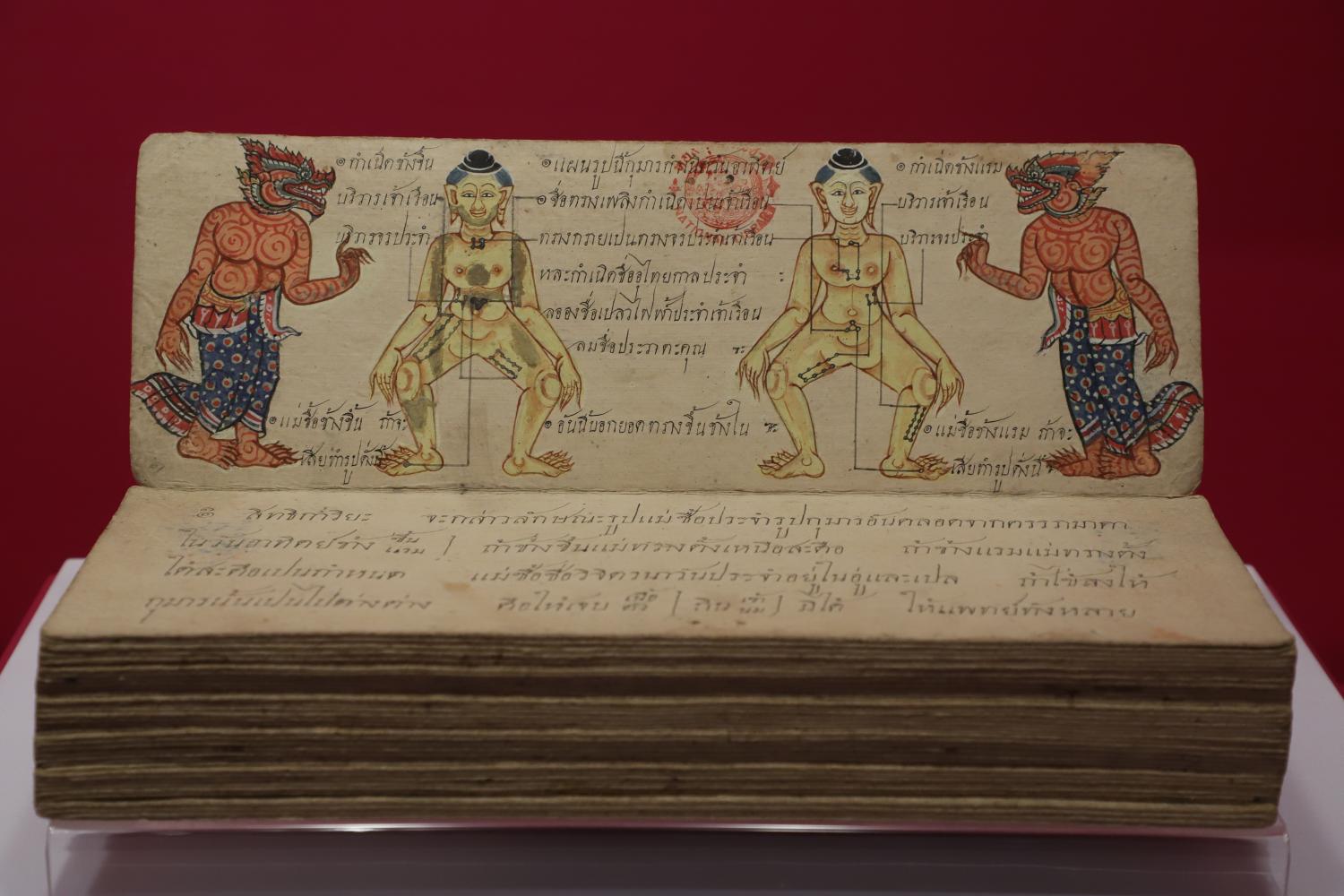 The Science of Healing presents curative methods before people understood sicknesses were caused by germs or degeneration of the body and organs.

Humans And Diseases provides information about diseases throughout the ages. Most showcases display bones and skulls. Thanporn Bunnag, the curator, said teeth and bone diseases can help determine what society was like at the time. Dental diseases were not very prevalent in a hunting society. After humanity evolved from a hunting society into an agricultural one, people began to consume more flour and sugar which would get stuck between their teeth and cause dental plaque.

"Osteoporosis and degenerative change can help identify what careers people had. For example, a person who had degenerative changes in the clavicles possibly was a fisherman since he may have often thrown a net to catch fish and paddled a lot. However, all of these are only assumptions," Thanporn explained.

"One of the highlights in this section are two cranium fragments from Kanchanaburi and Udon Thani. These two cranium fragments have holes which are rounded and smooth. Many specialists presumed that the holes were caused by multiple myeloma which is a cancer of plasma cells. The holes were possibly made from trepanning or cranial puncture to treat the disease. Back then, skull piercing was believed to help expel evil spirits. The other assumption is that insects entered the skull after death."

The Humans And Diseases section also displays inscriptions and scriptures which recorded types of diseases and/or treatments such as cholera, leprosy and malaria. One important scripture is the Pharmacopoeia Scripture Of The Smallpox Plan Volume I which explains the stages of smallpox, the healing process, medication and incantation.

The Science Of Healing presents curative methods before people understood sicknesses were caused by various germs or degeneration of the body and organs. At the entrance of the section, visitors can see a Warlord Symbol, a mark on the bottom of a palm sugar pot, which is believed to prevent the devils from invading a house or a village. Many Thais also believe that amulets and/or sacred objects can prevent them from misfortunes or sicknesses. A wooden table was used by medical students and lecturers to dissect and examine cadavers.

In this section, a video displays healing rituals including Lam Peefah and Nora Yiabsen. Lam Peefah is a northeastern healing ritual where elderly people give offerings to Phaya Tan and dance along to music from a khan, a bamboo mouth organ. In the South, Nora Yiabsen is performed by a Nora master to treat skin disorders.

The Wisdom Of Thai Traditional Medicine showcases manuscripts that contain local methods of curing diseases, healing bodies and nourishing minds based on old beliefs. Sarinya Patha, the curator, said the highlight of the section is half of a stone medicine crusher. Beneath the stone is five lines of Yedhamma incantation in the Pali language. People believed that Yedhamma made the medication sacred and could dispel diseases.

"Only two stone medicine crushers with Yedhamma have been found, so they are rare. Yedhamma was believed to make medications sacred. Thus, patients who took those medications would recover in both mind and body," Sarinya said.

"After King Rama III granted permission to build contorting hermit statues, he invited the members of the royal family, civil servants, monks and scholars to compose poems portraying 80 postures of the contorted hermits. These postures can help to relieve muscle pain and improve the digestive system and the respiratory system," said Sarinya. 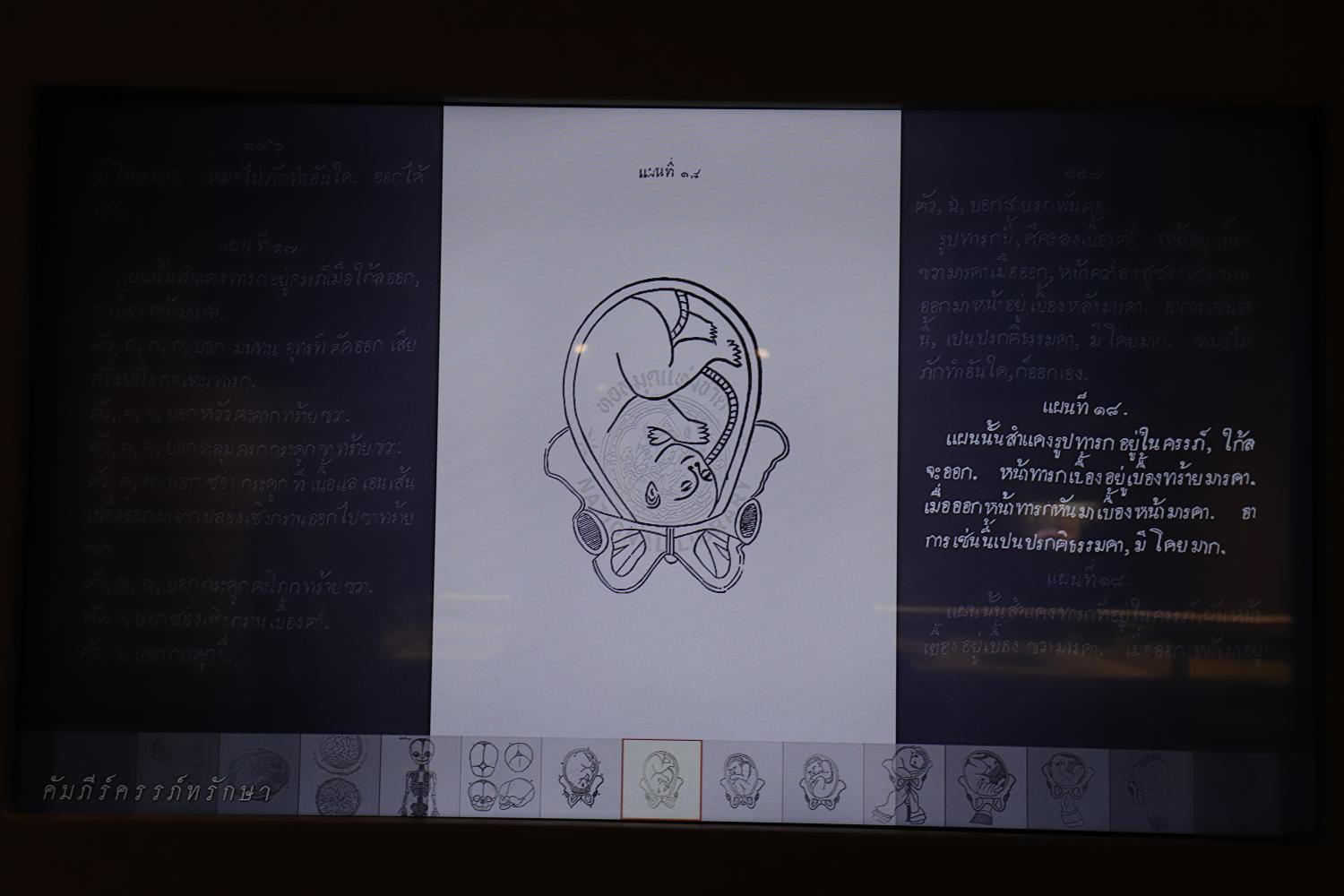 Kampi Kan Ta Raksa was translated from the book Treaties On Midwifery by Dan Beach Bradley.

A wooden table in an anatomy classroom at Pattayakorn School is the highlight of Western Medicine In Siam. The wooden table was used by medical students and lecturers to dissect and examine cadavers. Annop Jangswang, the curator, said the exhibition displays the autopsy table because it represented anatomy that was first taught at Pattayakorn School by Western doctors. At the showcases, there is medical equipment such as a wound dressing set, surgical equipment and a dressing drum owned by Maj Luang Vikanesprasitvittaya who was among the first batch of medical students from Pattayakorn School.

In the past, Thais believed in traditional postpartum care which required mothers to lie next to a fire and restrict their food and beverage. Dan Beach Bradley, an American Protestant missionary, wanted to change the attitude towards postpartum care. Bradley translated the book Treaties On Midwifery into Thai, Kampi Kan Ta Raksa. The book explains pregnancy stages, steps for delivering babies in different positions and medical equipment.

The final section, Social Mobilisation For The New Way Of Life, narrates how Thais manage pandemics. R-Phath Phinas (sickness destroyed) was recognised in the reign of King Rama I but it possibly originated in the Ayutthaya period. The main events include praying continuously, sprinkling holy water and parading important Buddha images around the city to allay people's fears and panics. In 1888, Siriraj Hospital was established and its medical school officially opened in 1900. Kanchana Oatyimprai, the curator, said it allowed more doctors to help Thais have access to Western medical treatment. 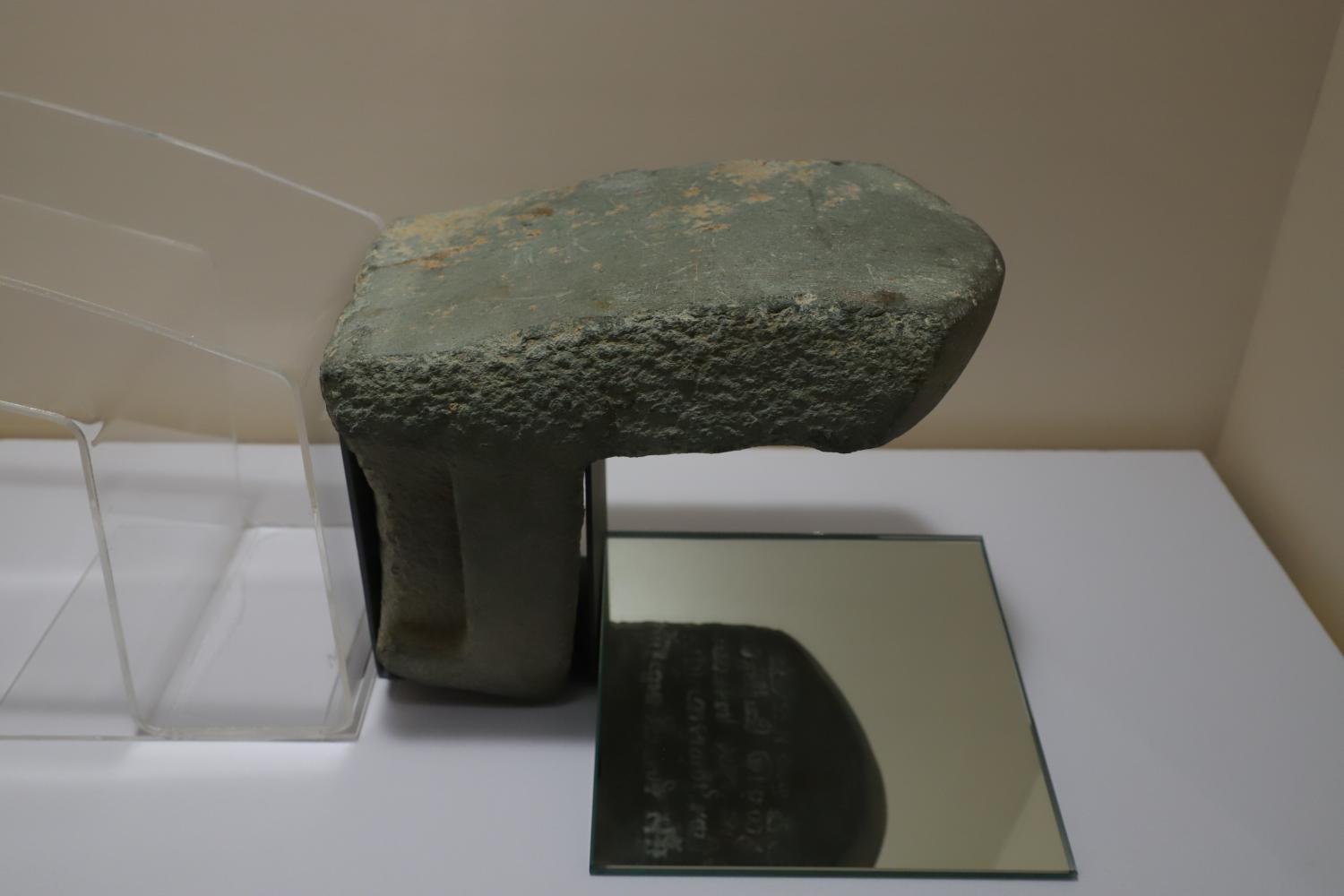 Beneath a stone medicine crusher are five lines of Yedhamma incantation in the Pali language.

"The establishment of the Thai Red Cross Society helped Thailand's public health progress because the institution could raise money for charity easier and established a blood bank and an organ bank which can immediately help patients," said Kanchana.

The executive director of the Office of National Museums said she hopes that visitors will come to learn about the past.

"Besides Covid-19, there will be other diseases and pandemics in the future. I hope that people can maintain their rational state of mind and learn how people in the past coped with pandemics and how they had been through tough situations. If those people had not made it, we would not be here today," said Nitaya.

"Arogya Panidhana" runs at the National Museum Bangkok until Sunday. The admission fee is 30 baht for Thai citizens and 200 baht for foreigners. For more information, visit facebook.com/nationalmuseumbangkok. 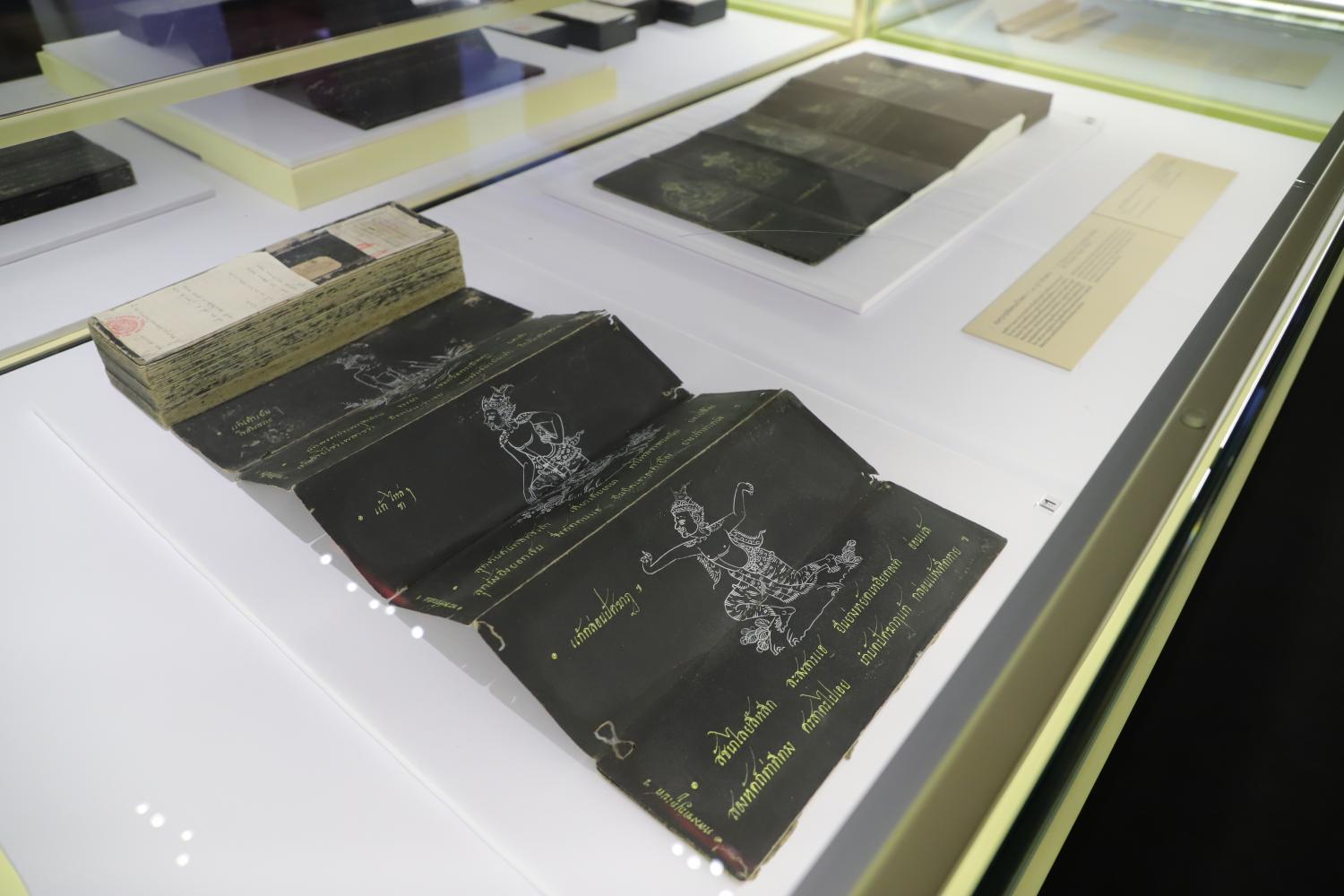 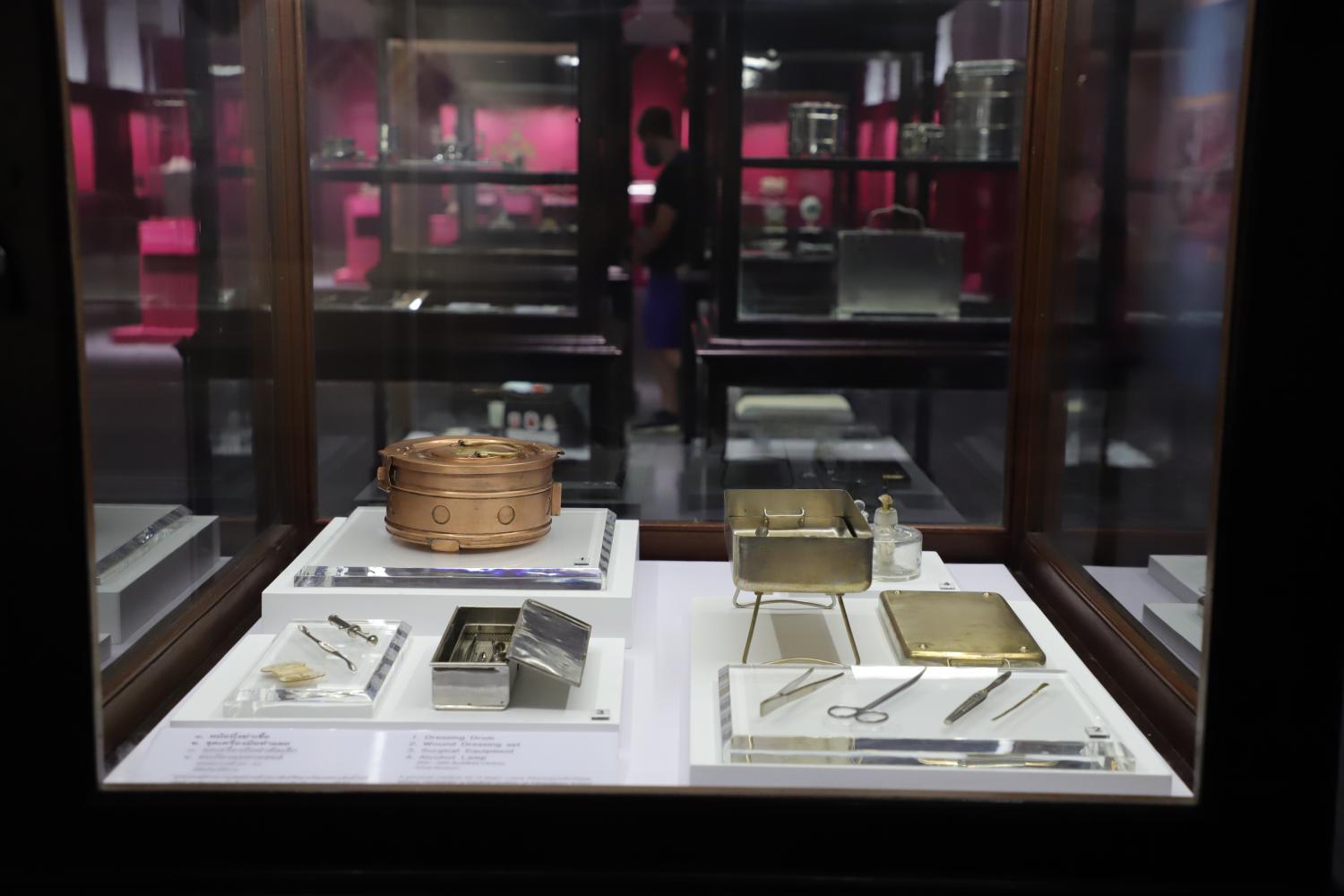 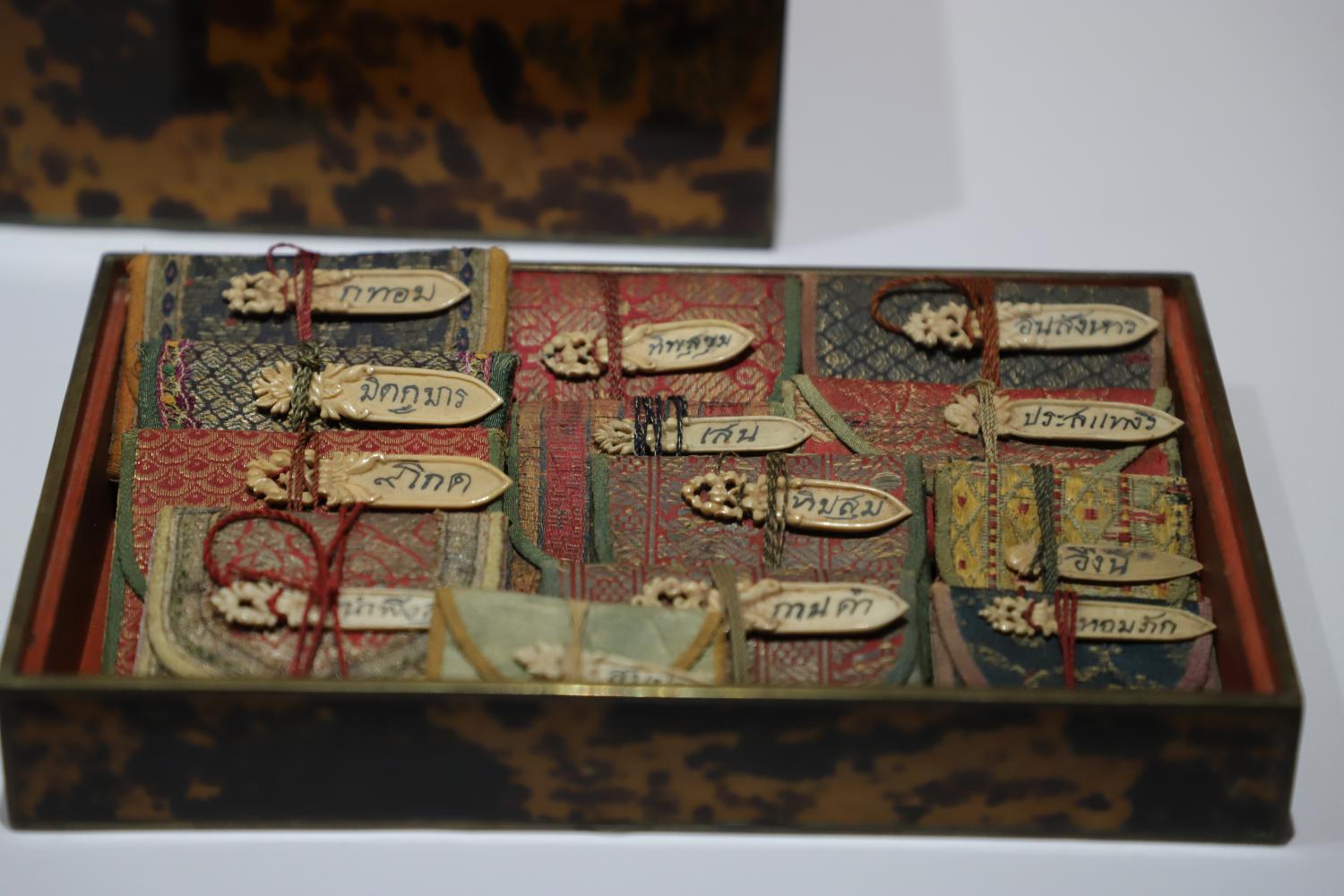 The Pharmacopoeia Scripture Of The Smallpox Plan Volume I explains the stages of smallpox. 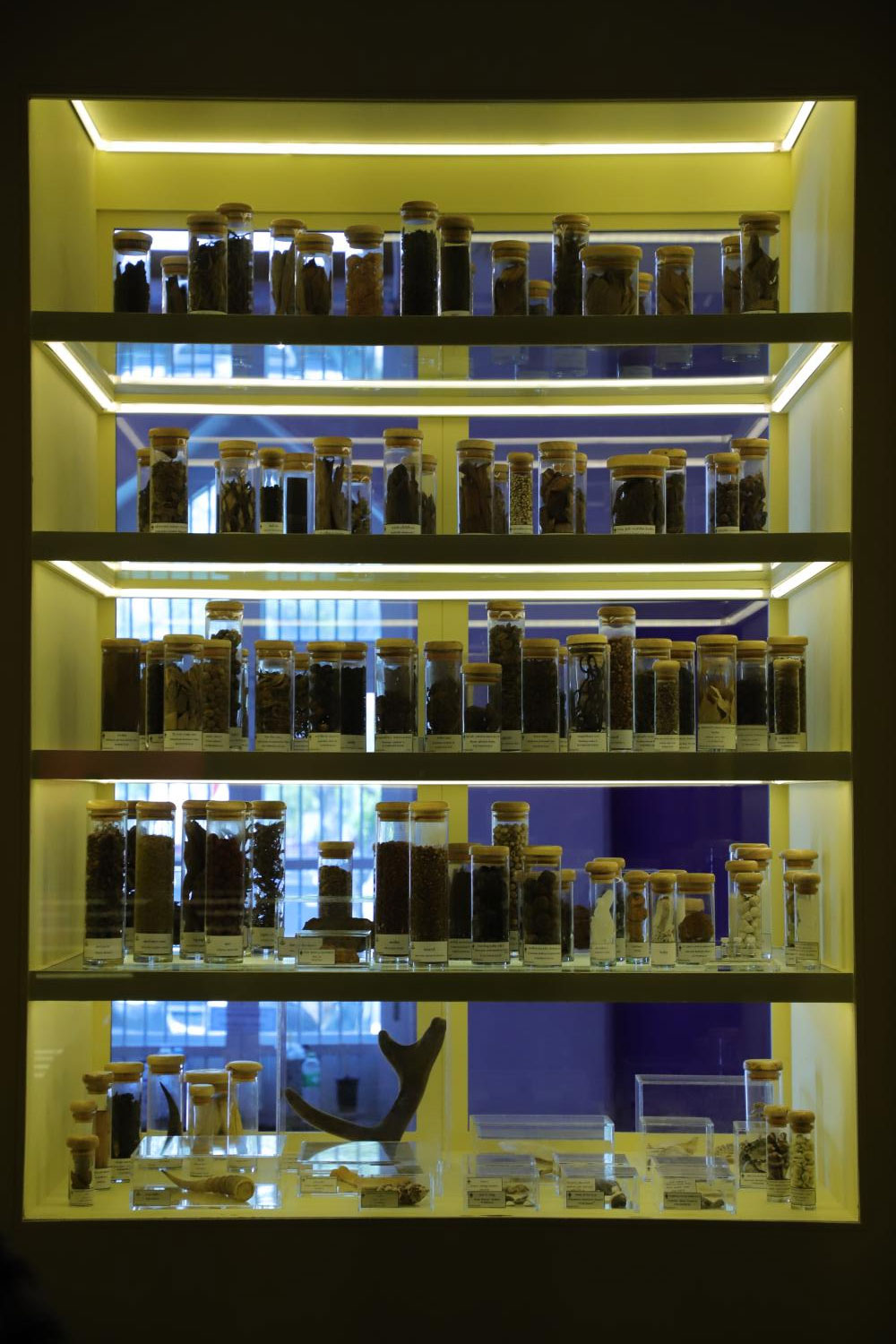 The Humans And Diseases section displays bones and skulls.