Black takes over the palette for the autumn/winter 2022 collection created under the artistic direction of Andrea Pompilio, who has associated with the Japanese label since 2013.

Onitsuka Tiger originated as a sports shoe brand in 1949. Its evolution as a fashion house culminated with this collection presented in its first fully-fledged runway show during Milan Fashion Week earlier this year.

The new designs are inspired by 1980s fashion, particularly those worn by subcultures. The decade also saw Japan setting trends in street fashion such as the all-black karasu-zoku (crow tribe) style.

A preview of the ready-to-wear, bags and shoes was recently held at Onitsuka Tiger Global Flagship Store in Siam Square One. 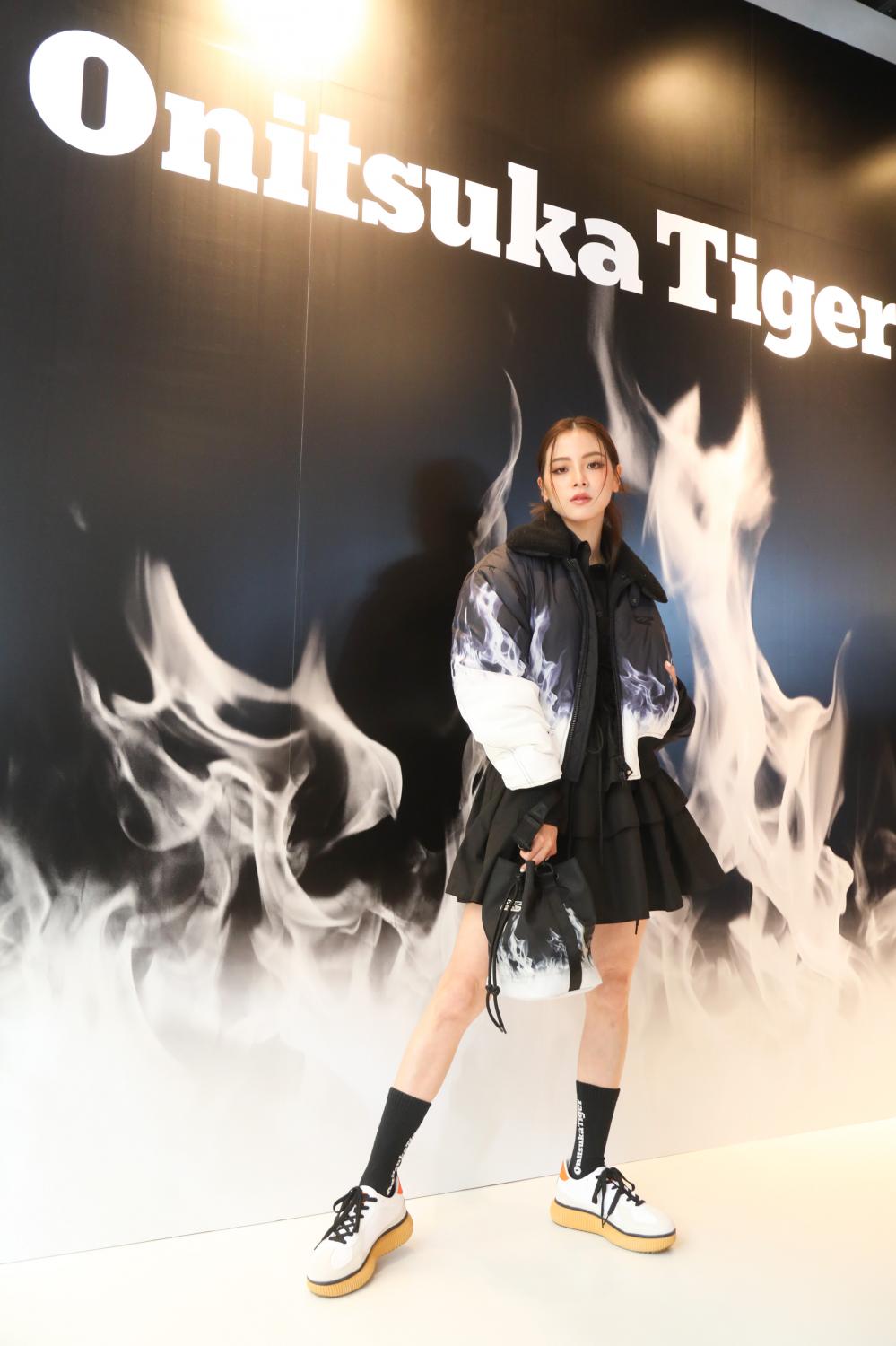 The event had brand ambassador Pimchanok Luevisadpaibul strutting a slightly gothic and girly style with a modern rock star twist by wearing a black tiered dress with drawstring waist, layered by a black blouson featuring a white flame print. The bag in the same print is co-ordinated with white sneakers contrasted by a yellow sole.

The flame print is also ablaze on the hem of knitwear and the base of bags. Likewise, a floral motif emerges from hemlines of jackets and trousers accented by red trimming.

A graphic pattern appears on sleeves of sweatshirts and jackets as well as kaftans that can be matched with maxi Bermuda shorts or long trousers.

Layering, typical of Japanese ceremonial dress, is pivotal in conceiving the silhouette.

The footwear included the Delegation Chunk Boot, whose glossy nylon and suede upper is combined with a voluminous sole, while the Acromount Knit model with a subtle print accent represents the theme of the collection, Shadow.

Based on this concept, monotone black and white are used for the campaign visual, which pays tribute to 1980s Japanese fashion scenes. 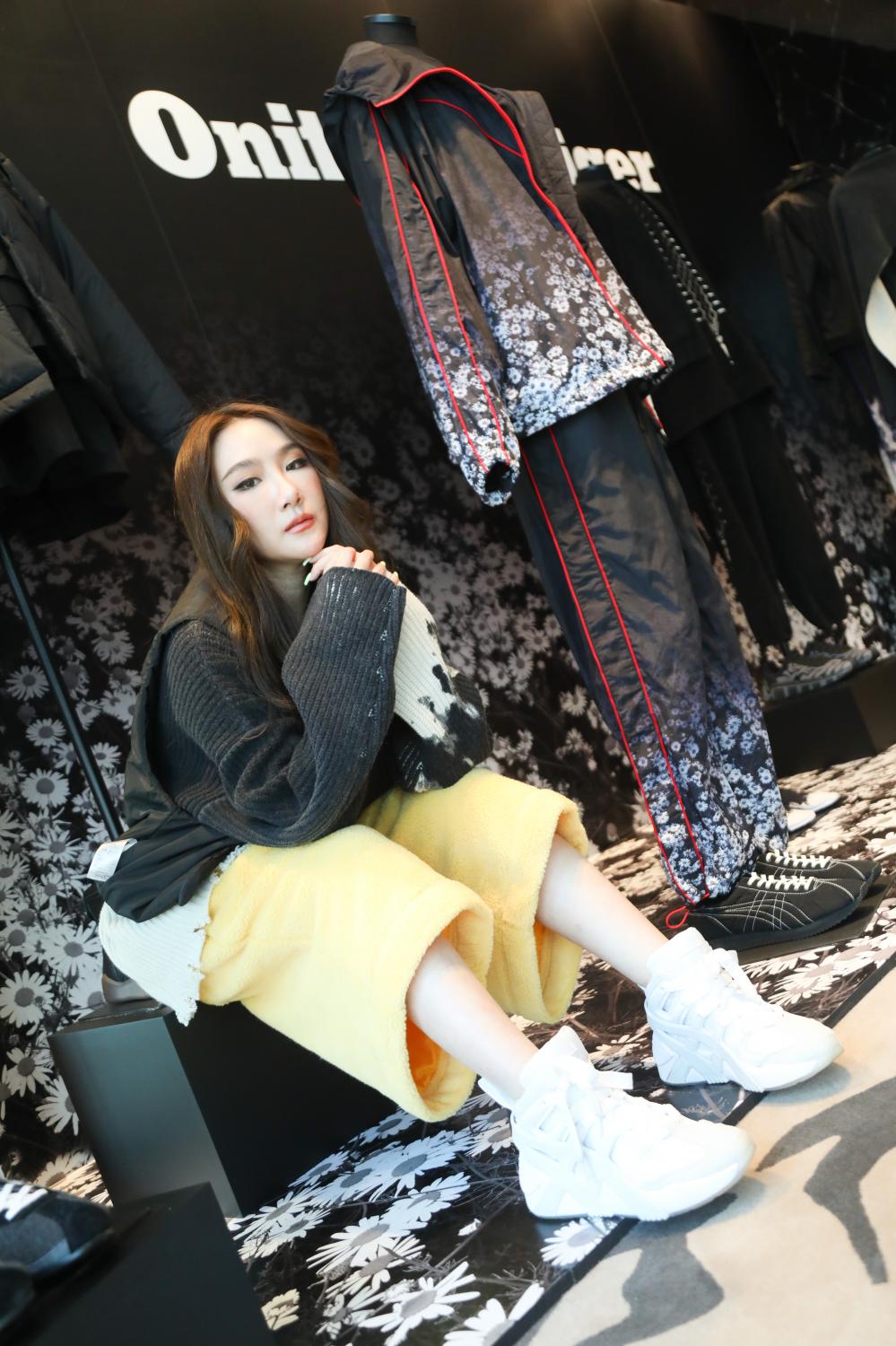 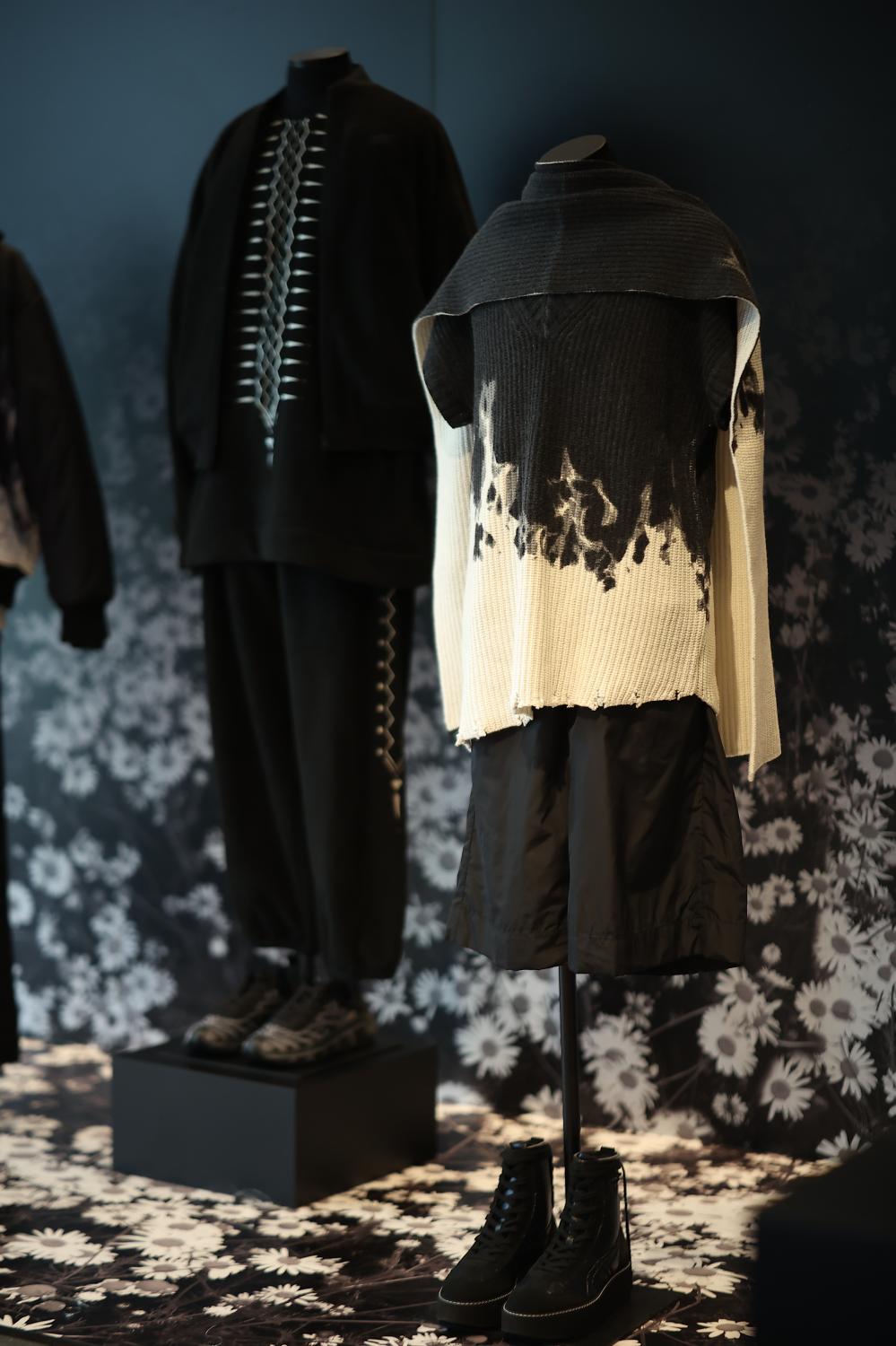 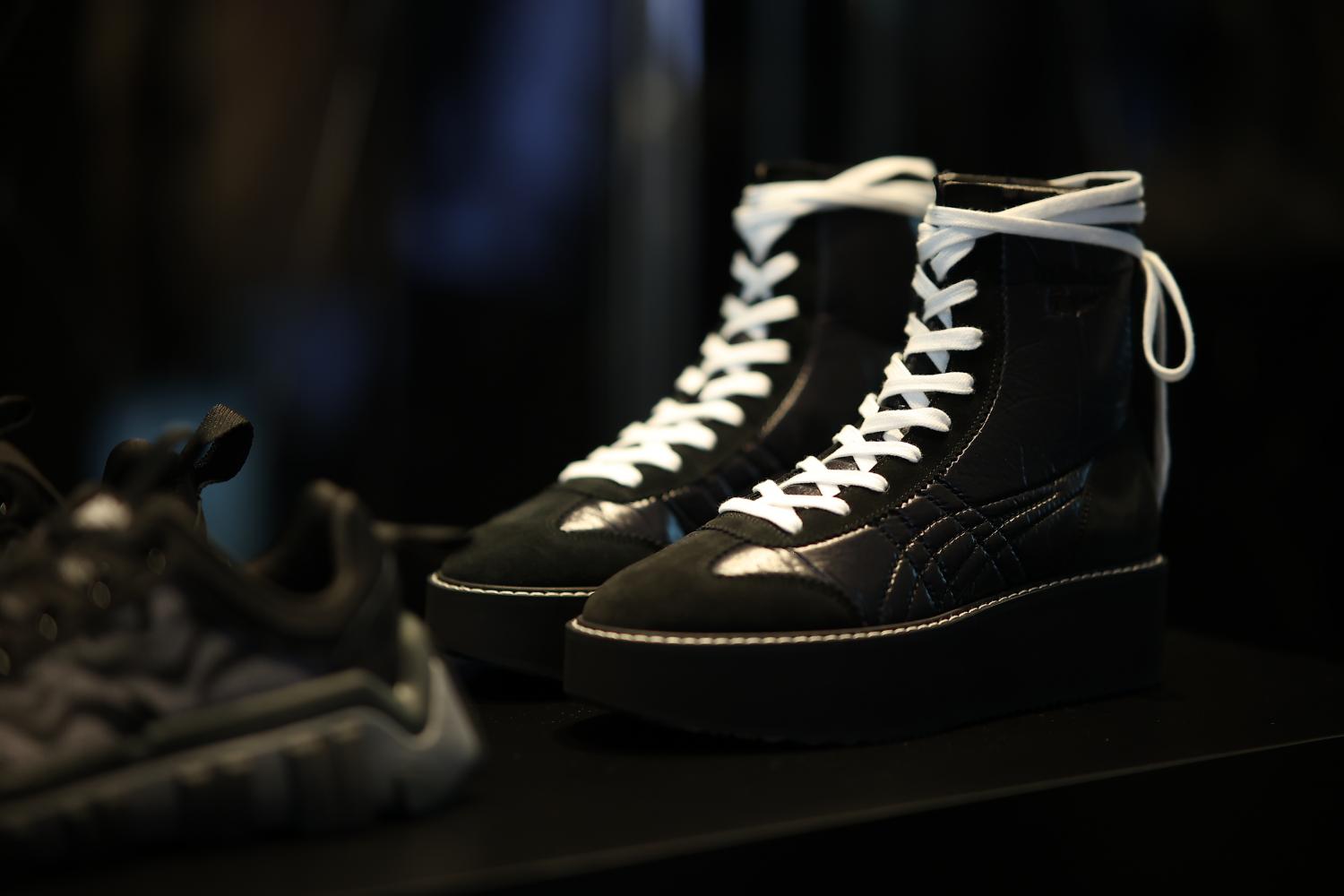 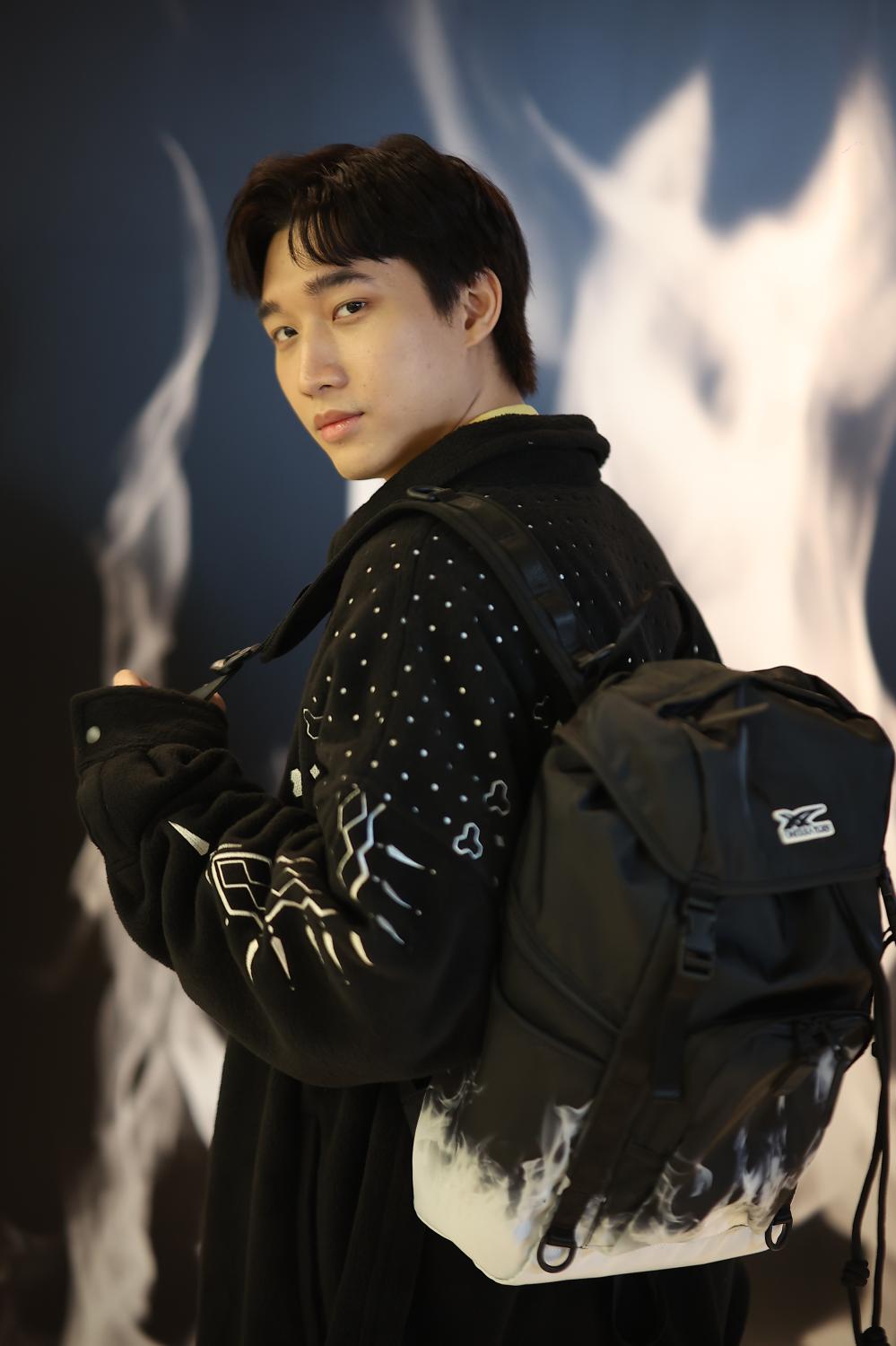