On the occasion of HM Queen Sirikit's 90th birthday, the National Library of Thailand is holding an exhibition of books exploring the roles of mothers in society

Tomorrow is National Mother's Day and families will spend valuable time together strengthening bonds. Meanwhile, museums, art galleries and shopping venues will present a variety of interesting exhibitions and other leisure activities to mark Her Majesty Queen Sirikit The Queen Mother's 90th birthday. If you're staying in the city or looking for places near Bangkok to celebrate this long weekend, check out the following list.

Throughout this month, the National Library of Thailand is hosting an exhibition titled "Mae Nai Nawaniyai Thai" (translated as Mothers In Thai Novels), to showcase a rare collection of 60 fiction books, in which mothers take on the role of the heroine and represent Thai society in various eras.

On view in the Vajirayana room, the exhibition can be divided into five zones and bookworms are welcome to sit and choose a book from a shelf to read for free in a peaceful corner. The first zone focuses on the 90-year-old Mother of the Kingdom who sets off on an imaginary journey in the footsteps of Queen Sirikit's royal projects to rehabilitate the woodlands, encourage supplementary jobs to enhance the quality of people's lives and conserve traditional Thai woven textiles.

To educate young readers about the evolution of Thai novels, the second zone transports visitors back to the reign of King Rama V when Thai royalty and noblemen, who had studied abroad, brought written literature and promoted Western civilisation upon their return.

"We've used our resources to host circulating exhibitions on a range of subjects throughout the year in an effort to encourage young people to read. This month, visitors will learn about the development of Thai literature since we've chosen a selection of acclaimed and award-winning books to represent different types of mothers in Thai culture. Although they may experience various challenges and have various philosophies of life, all mums adore their offspring," said Nawarat Panyangam, director of information resources development group at the National Library of Thailand. 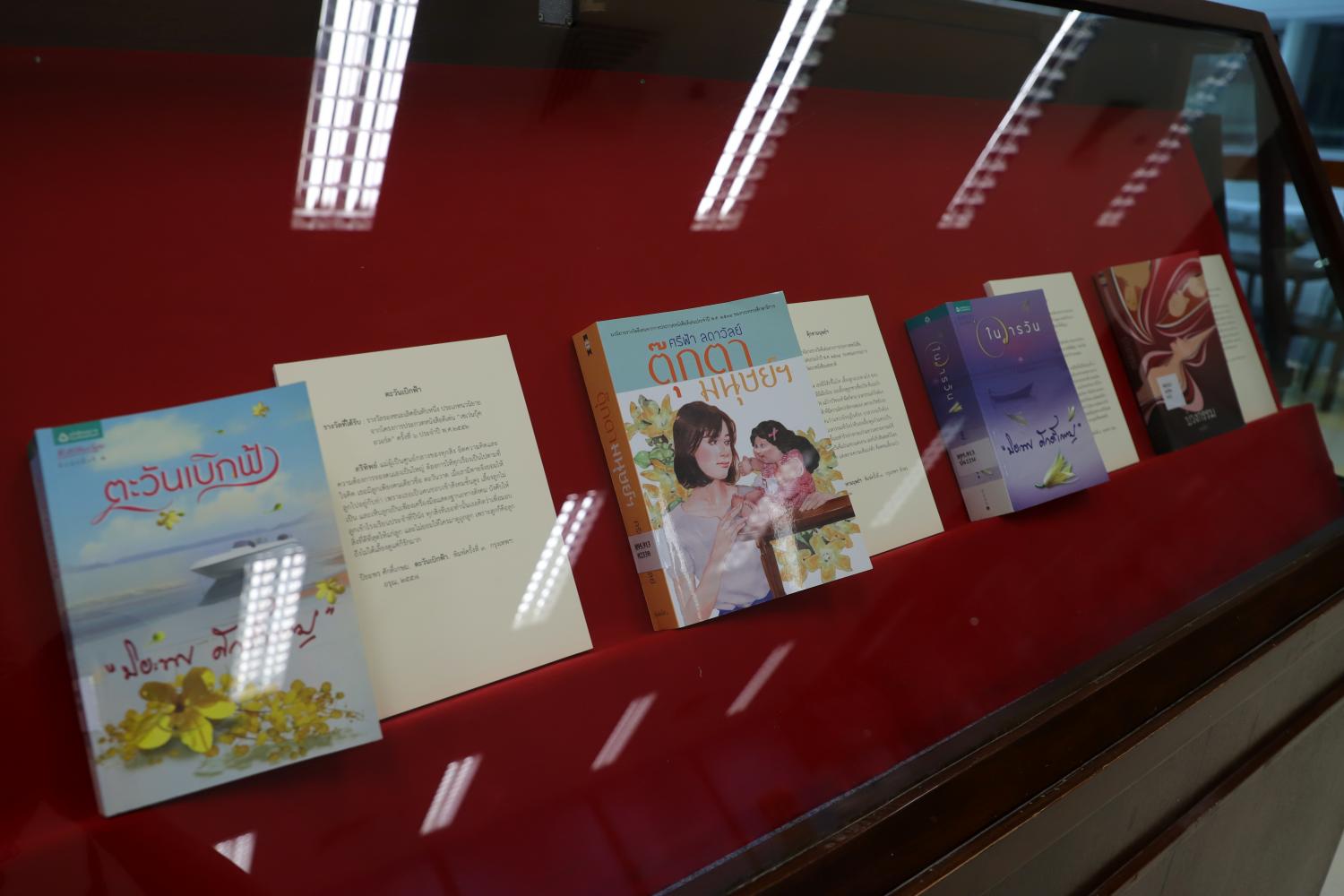 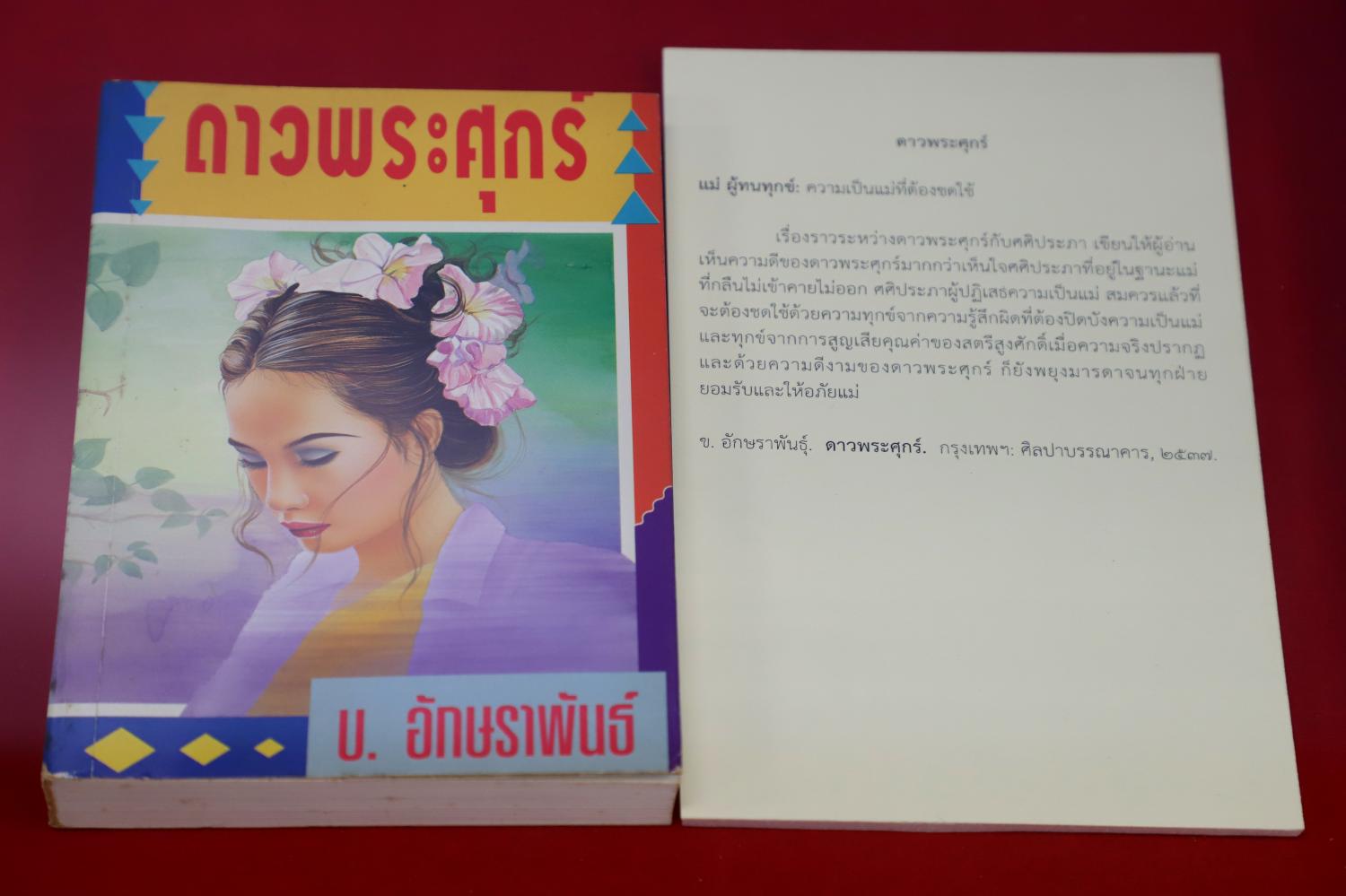 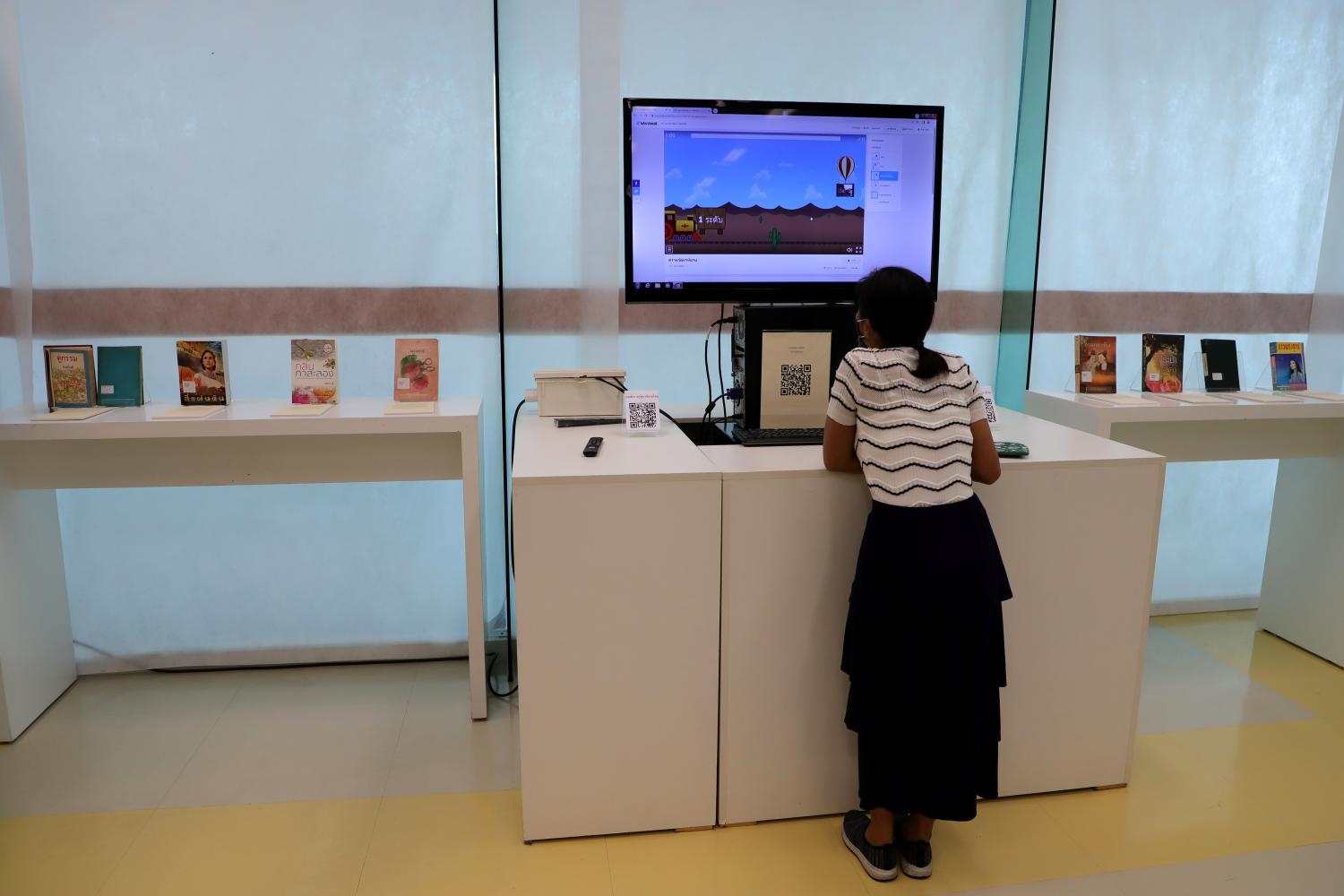 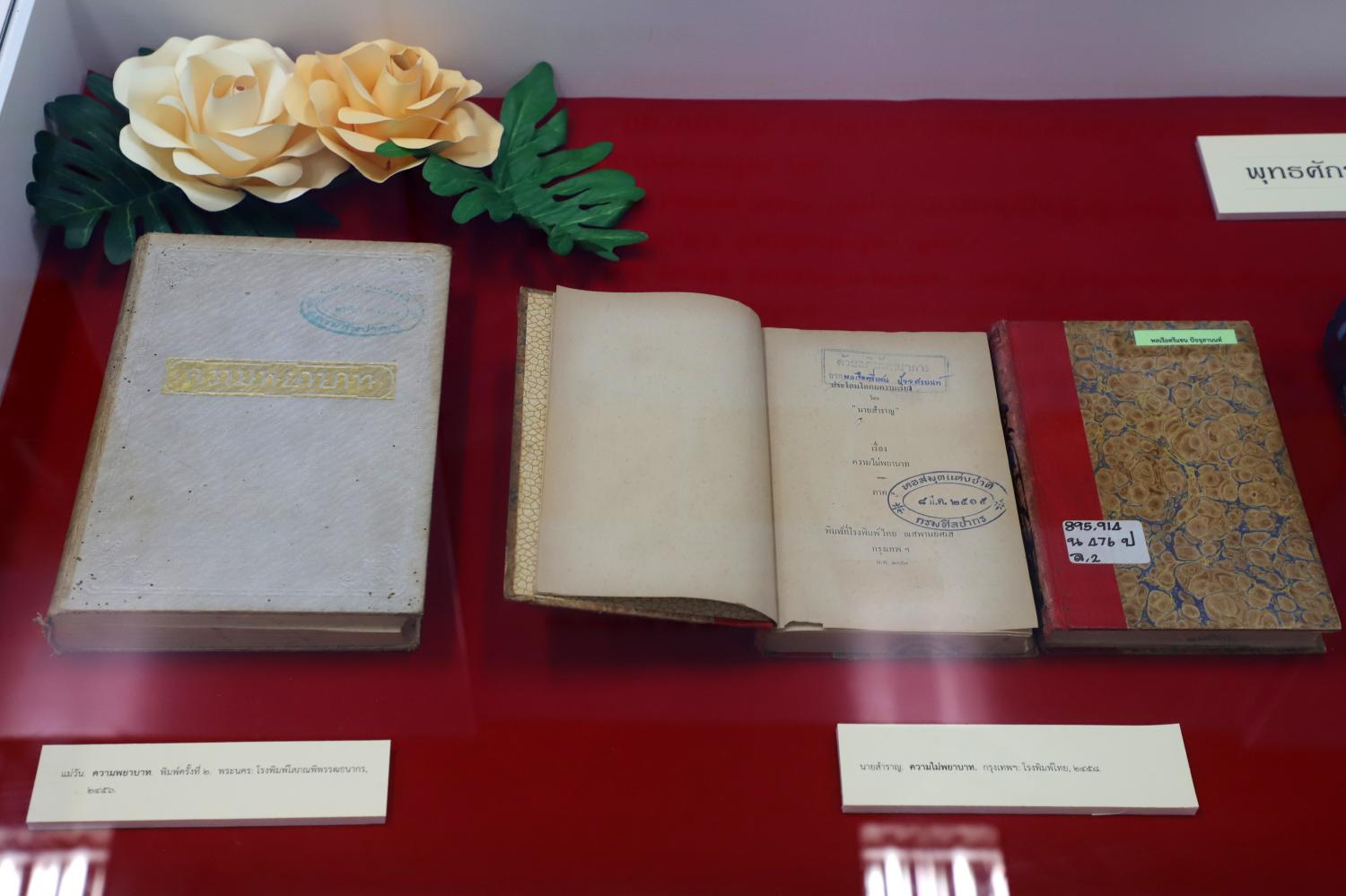 Visitors can read Thailand's first translated novel Khwam Phayabat written in 1900 by Phraya Surintharacha under his pseudonym Mae Wan, who rose to fame for his exquisite language. This is a translation of British author Marie Corelli's Vendetta that tells the story of Italian Count Fabio Romani -- falsely believed to be dead -- who comes home to discover his wife having a sexual relationship with his best friend and seeks revenge on them.

In the same year, Luang Wilatpariwat penned Khwam Mai Phayabat to lift people's spirits according to Buddhist philosophy. It's the first Thai novel in an adaptation of Khwam Phayabat, which teaches readers how to forgive others and let go of grudges.

In 1904, King Vajiravudh translated both English and French works into Thai and wrote crime fiction such as The Golden Scorpion by Sax Rohmer; Mysteries Of A Great City by William Le Queux; and The Adventures Of Thong-in Rathanet.

During the reign of King Rama VII, the structure of the book is imaginative with an increasingly realistic plot that follows the lives of wealthy people. There was crime, family, science, adventure and comedy.

Later in 1957, a political change took place and novelists were forced to constrain their opinions for a decade. As a result, Thai literature entered a gloomy era marked by stories that were mostly lighthearted to avoid societal tension. Nowadays, there is more adventure, fantasy, thriller and social fiction that portrays societal difficulties and upcountry life due to authors' freedom to critique a wide range of topics.

The third zone deals with literary discussions on motherhood. Different characters that authors have created symbolise both the mother who gave birth and the mother who is not a biological mother but raises other people's children without asking anything in return.

According to Pornthada Suvatanavanich's analysis of motherhood in literature over three decades, visitors can have a better understanding of how mums think differently in various contexts and how they live in Thai culture.

A series of outstanding 13 novels are on display to highlight six key traits of mothers -- those who endure sacrifice and hardship; those who suffer; those who pass along valuable life lessons; those who are flesh and blood mothers; those who fight against unfair systems; and those who are happy to perform their duties. 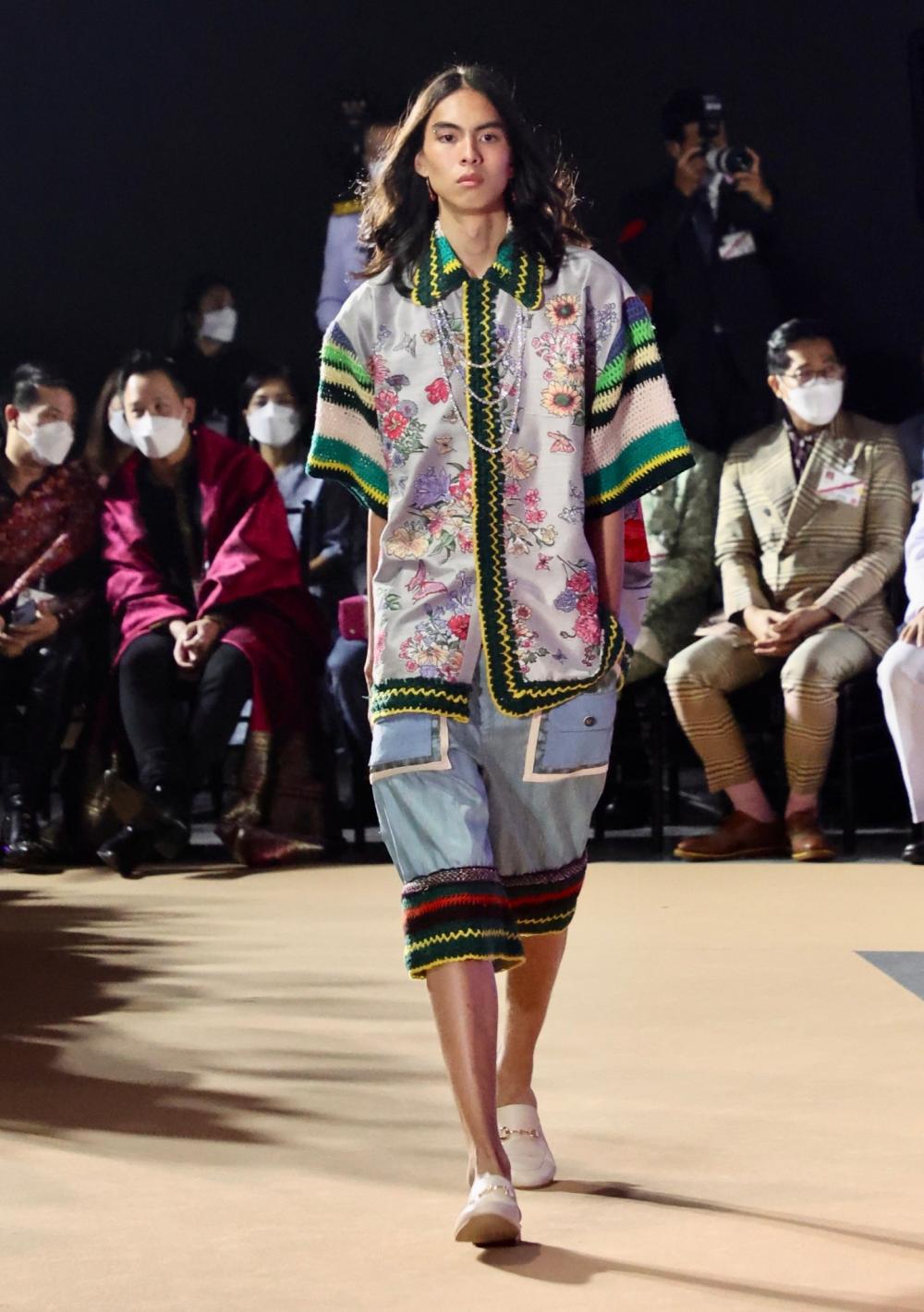 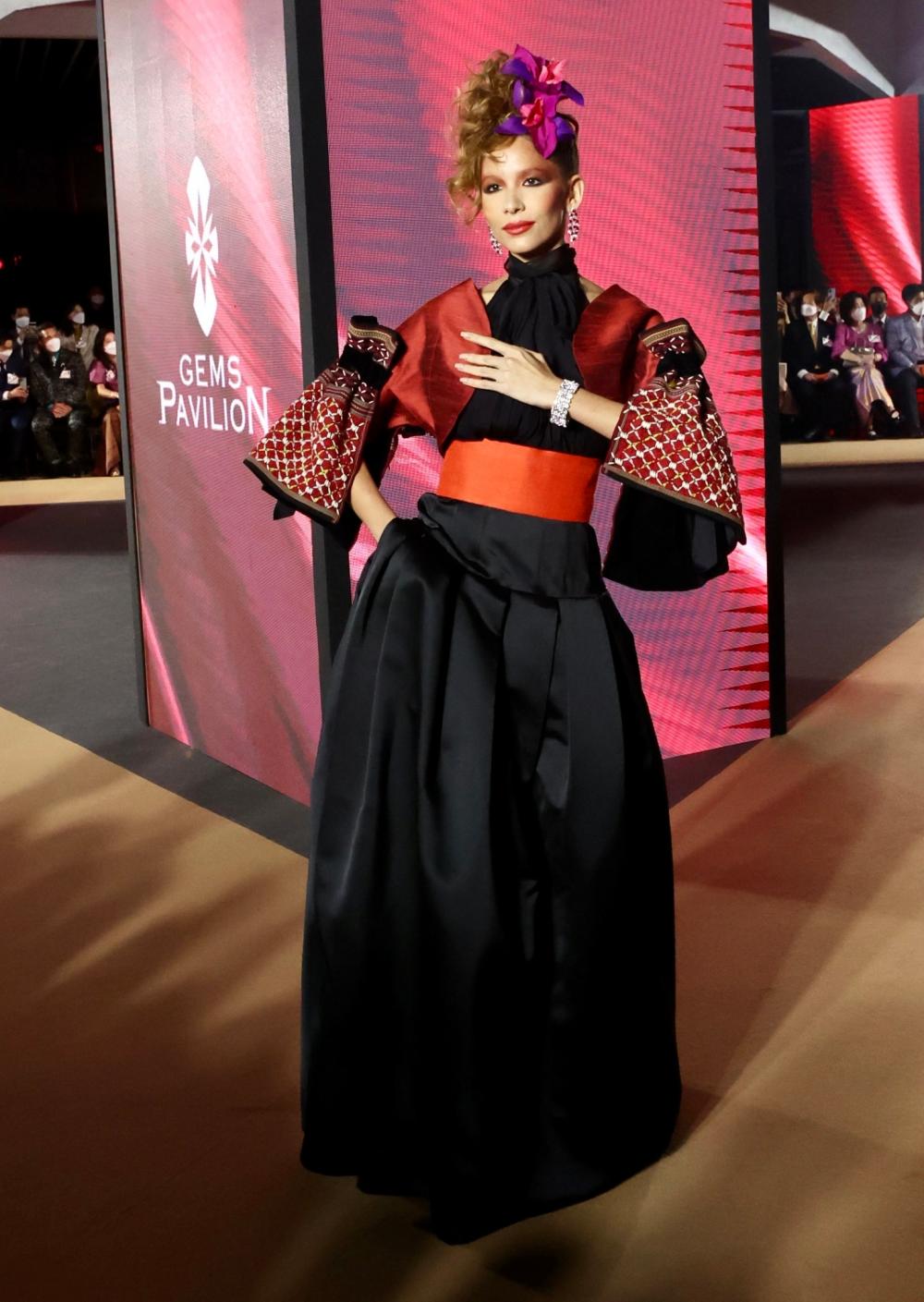 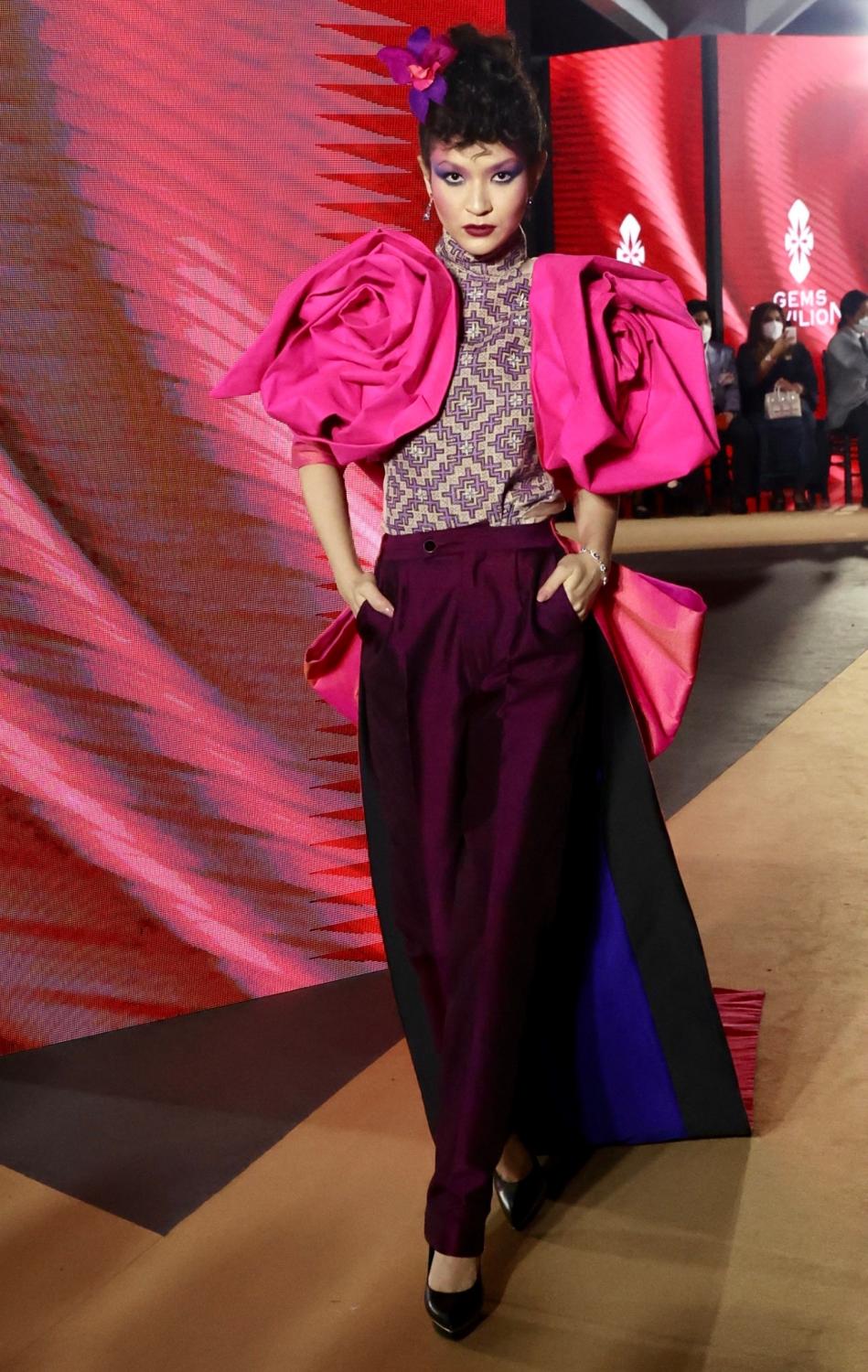 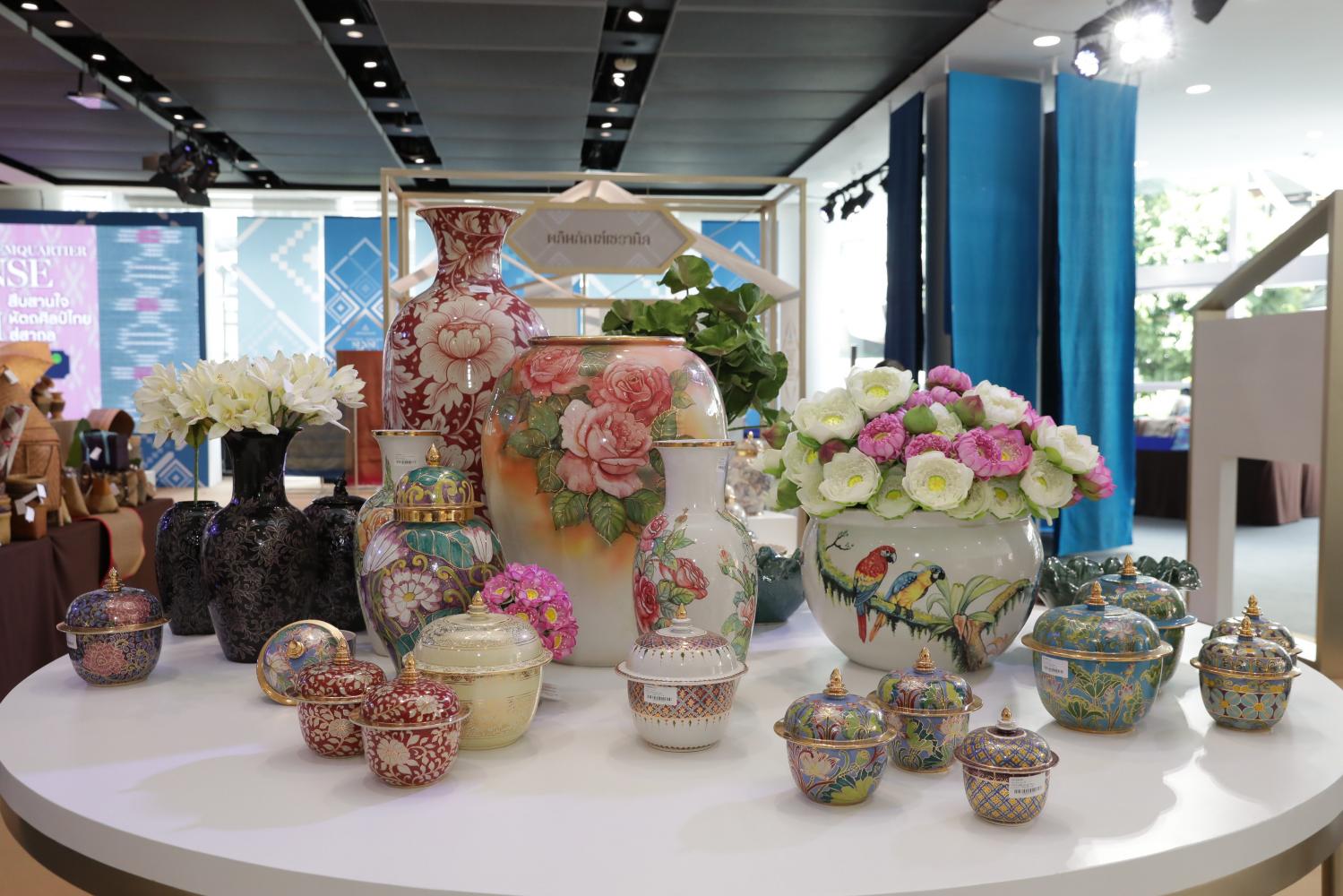 For example, Khunying Kaew educates her son on how to have a respectable marriage in Padiwaradda by Princess Vibhavadi Rangsit (writing under the pen name V. Na Pramuanmarg); while a woman in La (Hunt) by Khunying Wimon Chiamcharoen (known by her pseudonym Thommayati) pursues guys who sexually assaulted her daughter.

In the following zone, visitors can view the adaptation of well-known books into television series and films that bring favourite characters to life, including Thong Nuea Kao by national author Supa Sirisingh (writing under the pen name Botan); Khu Kam by Thommayati; and Si Phaendin (Four Reigns) by MR Kukrit Pramoj.

It's challenging to picture how a way of life would seem in the real world when authors depict it using the alphabet. For young readers to understand more about Thai culture and history, the final zone boasts photos of historical locations or anything else mentioned in the books, such as the scorpion-tailed boat in Chiang Mai, court attendant-like dolls and Bangkok Noi Railway Station. Visitors can also test their brain power by matching the names of characters or scenes with novels on a gaming computer.

To appreciate top-notch Thai craftsmanship, a family outing can continue at the "Emporium EmQuartier Sense Of Thai" exhibition, which is on view until Sunday. This is a collective effort between The Emporium; The EmQuartier; the Foundation for the Promotion of Supplementary Occupations and Related Techniques of Her Majesty Queen Sirikit of Thailand (SUPPORT Foundation); the Department of Cultural Promotion; Government Savings Bank; Tourism Authority of Thailand; and Muang Thai Life Assurance in order to promote Thai textiles and handicrafts on a global scale.

"In addition to encouraging villagers to use their knowledge of weaving to increase income, Her Majesty Queen Sirikit The Queen Mother also wants to preserve the distinctive Thai textiles. This is to support rural communities in achieving self-sufficiency. To adapt Thai textiles to modern lifestyles, HRH Princess Sirivannavari Nariratana Rajakanya has created patterns and employed popular colour schemes," said Thanphuying Jarungjit Teekara, Her Majesty Queen Sirikit's private secretary. "Thai silk has a unique identity. It has knots and a gorgeous gloss. It can also absorb paint more effectively to produce delicate colours. It's famous for not wrinkling and is comfortable to wear both in the summer and the winter." 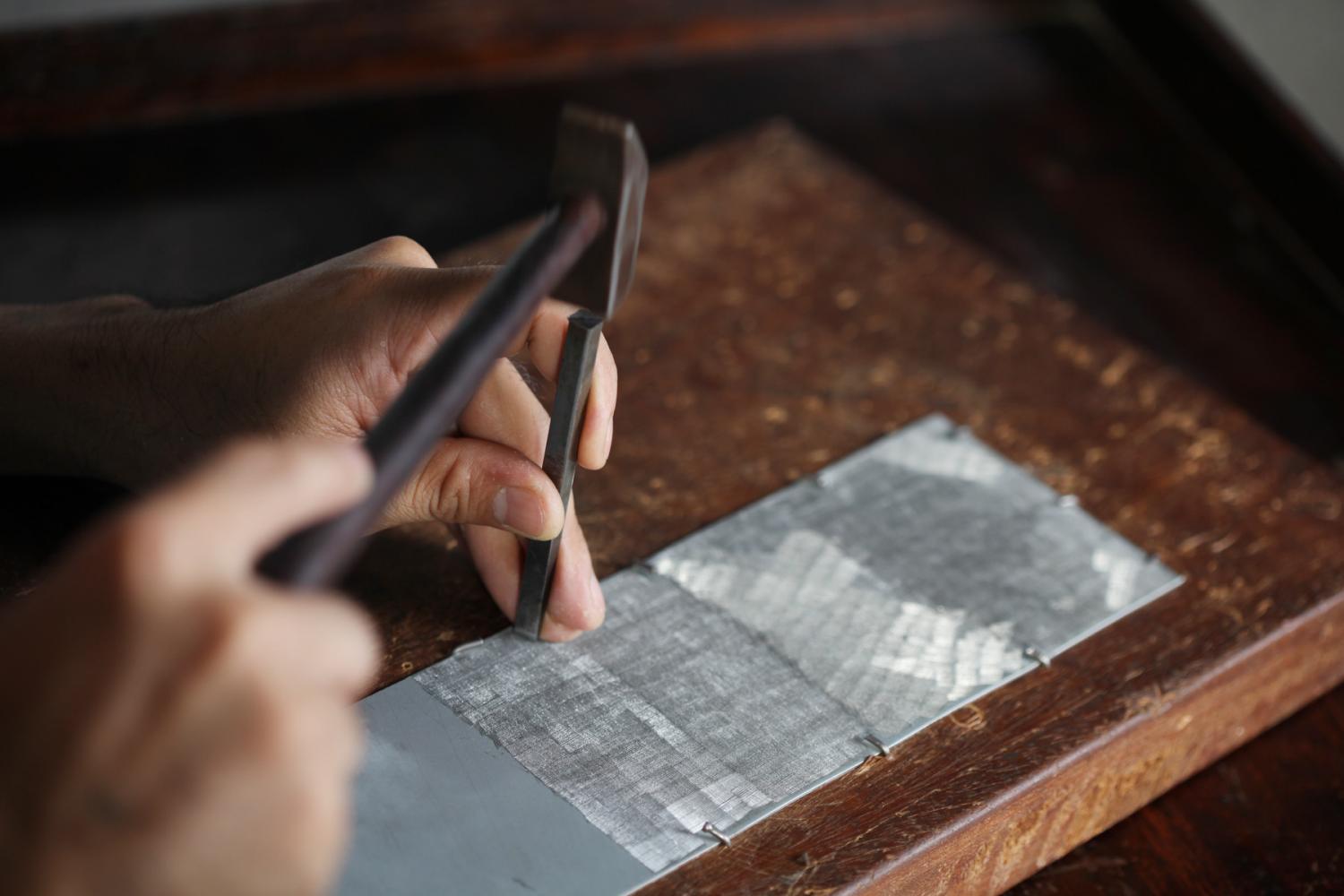 The Tourism Authority of Thailand is hosting 'Miracle Of The Arts Of The Kingdom' at the Arts of the Kingdom Museum throughout this month. (Photos courtesy of Arts of Kingdom Museum) 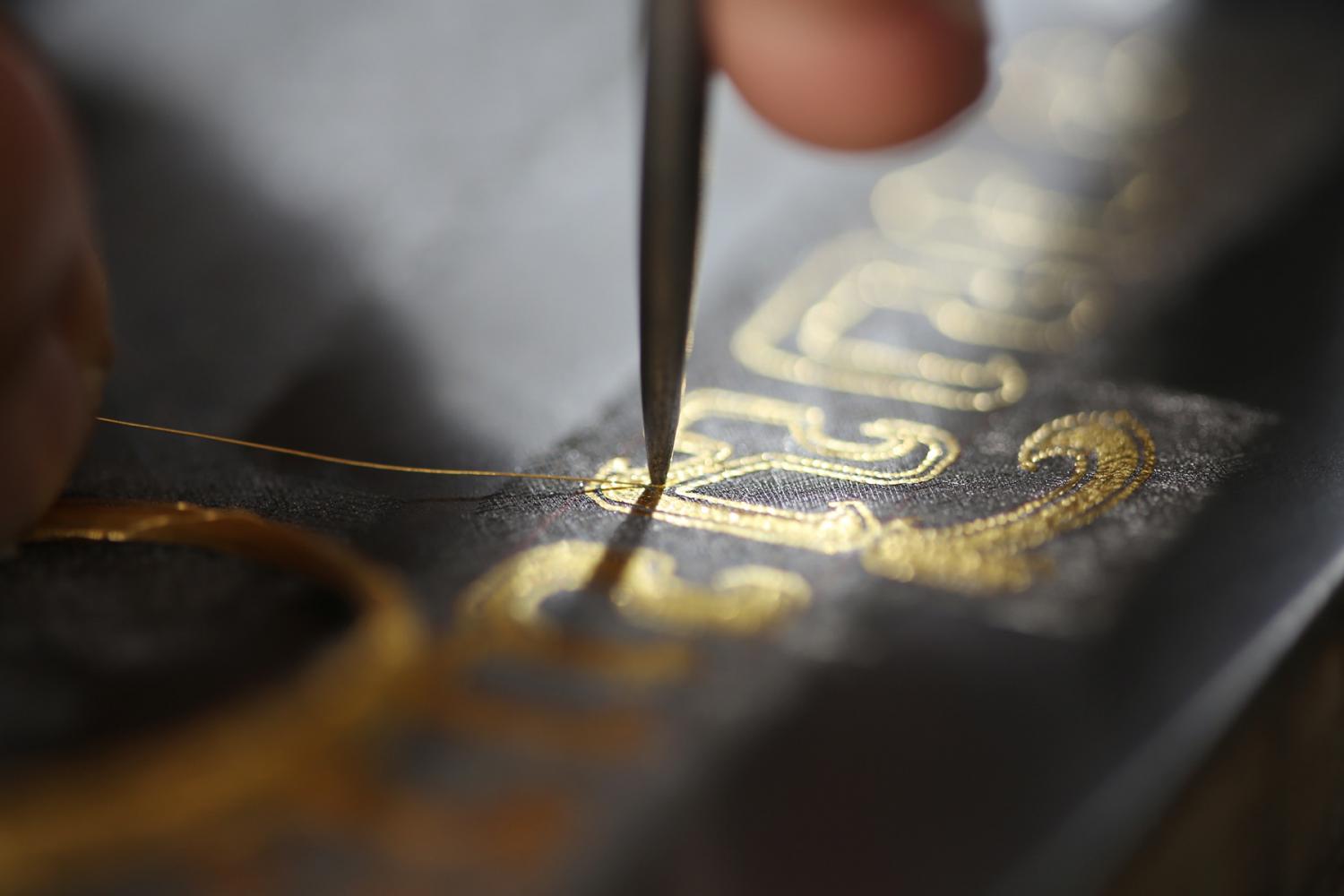 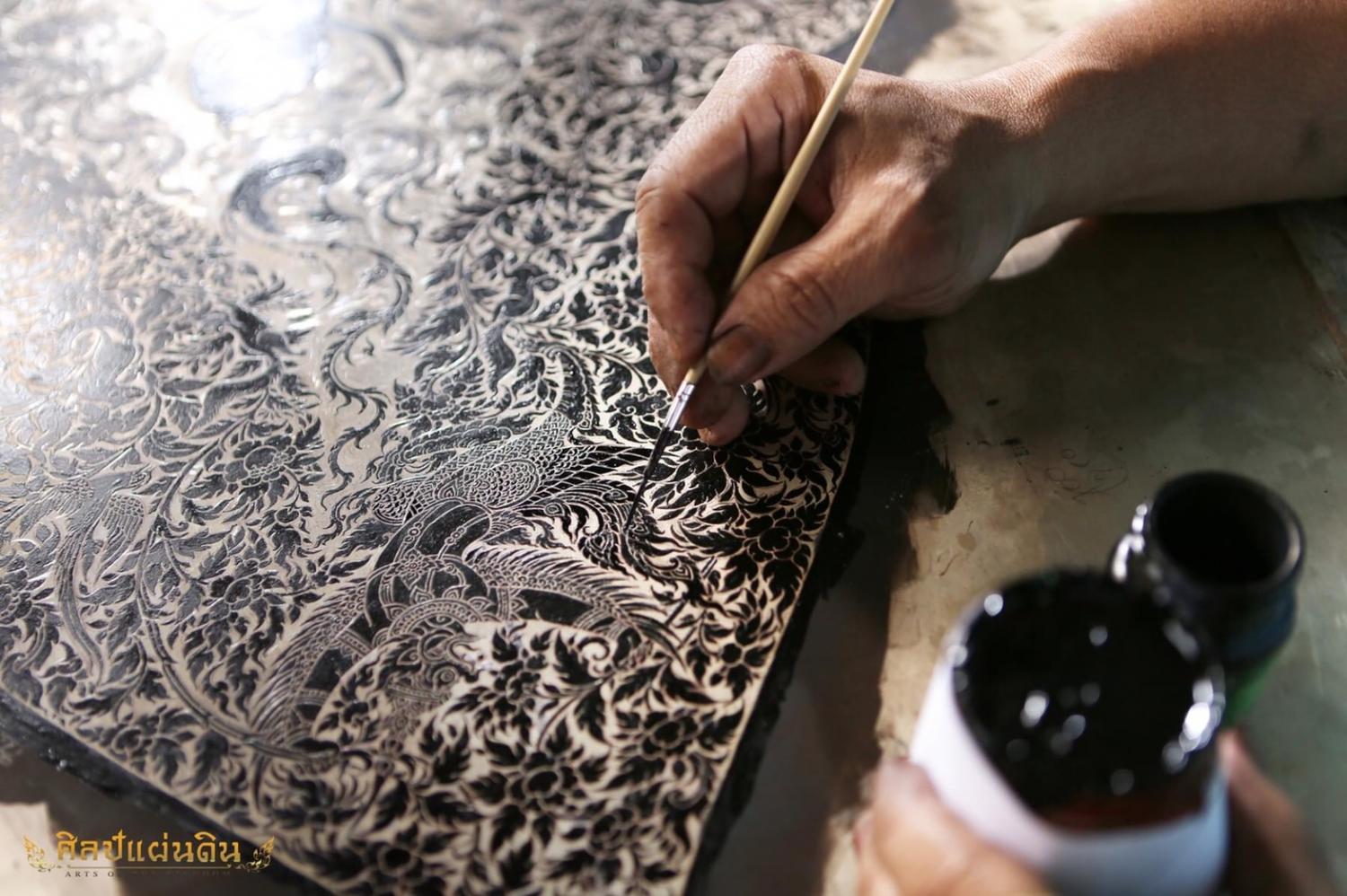 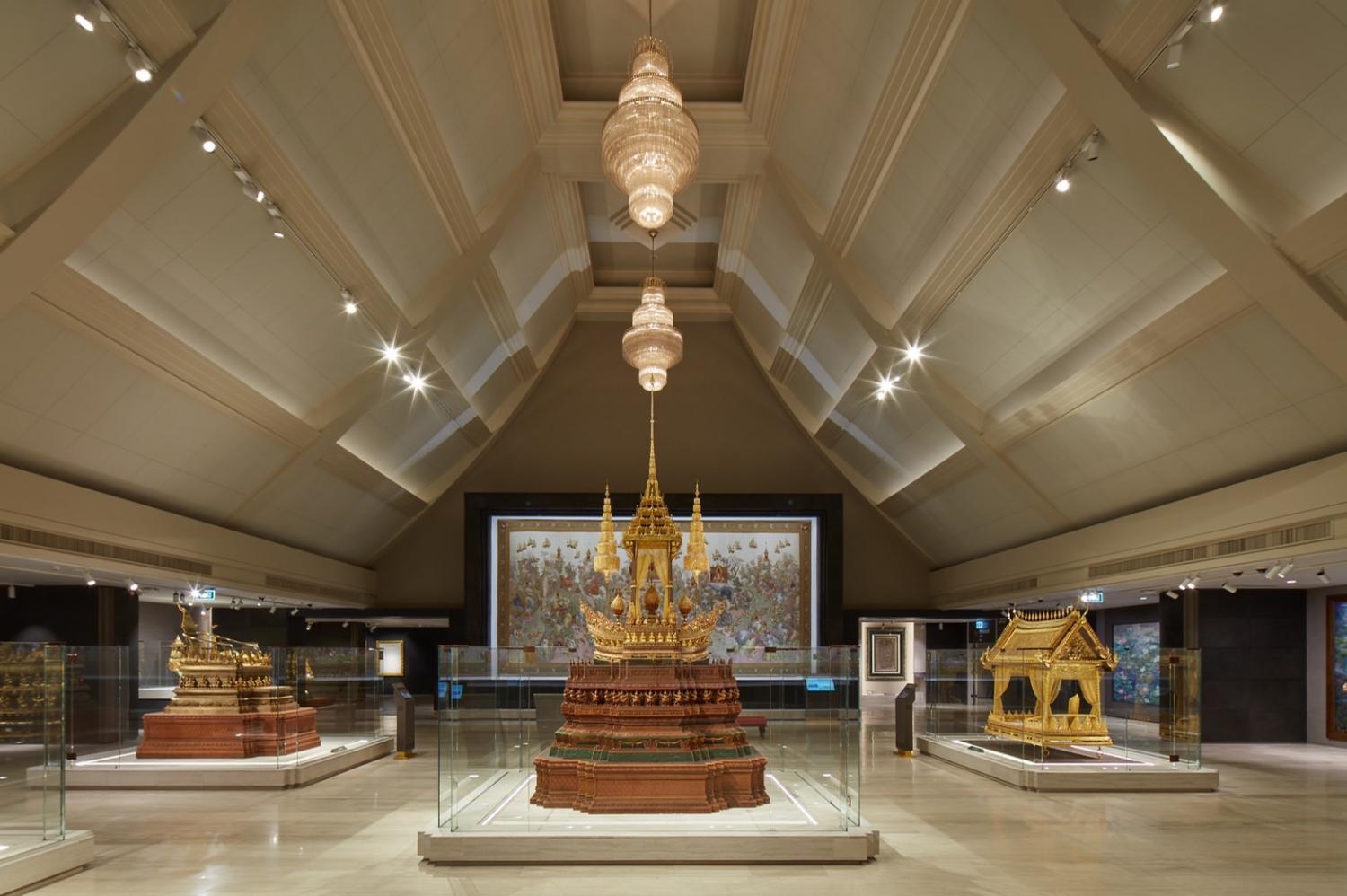 Asava focuses on pieces and daywear that are useful, comfortable and appropriate for everyday wear with simple but playful patterns. Hook's By Prapakas uses a variety of materials, intriguing embellishments and subtle details to create versatile modern unisex clothes for young people.

Issue designs long skirts and off-the-shoulder robes with its distinctive trademark orange-brown colour, known as Heaven on Earth, and a hand-embroidered Ganesha motif.

T And T have recreated some pieces from its spring/summer 2022 collection using Thai silk, cotton and natural fibres to give them a distinctive personality by adding eye-catching decorations. The Mini Capsule Collection by Theater was inspired by Queen Sirikit's royal attire between 1960 and 1969. It uses both Thai and foreign textiles in shades of purple, magenta and pink to mix and match with various Thai tribal designs, including Akha, Hmong, Mien and Karen.

Wishara Wish creates delicate, airy patterns to bring a calming, soothing touch to textiles from the SUPPORT Foundation. It also adds energy with vibrant hues and materials to promote balance in daily life. This combines conventional wisdom with contemporary styles and techniques.

Just a one-hour drive from Bangkok, families travelling to Ayutthaya's Arts of the Kingdom Museum this weekend will be greeted with the "Miracle Of The Arts Of The Kingdom", organised by the Tourism Authority of Thailand from Aug 12-14, Aug 20-21 and Aug 27-28.

A group of talented craftsmen will demonstrate how to craft golden nielloware and lipao wicker adorned with beetle wings, how to weave prae wa silk and how to make traditional Thai dishes and desserts.

Visitors can also join handcraft workshops from 1-4pm and watch khon mask dances and other Thai cultural performances from 5-7pm.