Judging by the cover

A History Of Thailand gets new artwork for 4th edition

We first published A History Of Thailand in 2005, 17 years ago. We have just prepared a fourth edition, adding a new chapter on the extraordinary events since 2005, and over 200 other changes based on new research, mostly by Thai historians. We needed a new cover to signal that this edition is really different.

The last cover featured a 19th-century temple mural. What about another, newer, spikier piece of art? We asked Chatvichai "Daeng" Promadhattavedi, director of the Bangkok Art and Culture Centre, for help. He sent us some suggestions. One stood out -- a painting of Democracy Monument floating in a luridly green sea. The monument is made of fish and other seafood. Somehow this chimed with what we had written about Thailand's embattled democracy over the past two decades.

The artist, Thienchai Nogngam, comes from Chon Buri. He has been exhibiting since 1976. Many of his subjects have a political slant. He says that the subjects for his work "come as a flash in my mind. I have to feel it and blurt it out as a picture".

The painting we liked is called Seafood. It was painted in 2013, shortly before the last coup.

Thienchai explained it like this: "People in Thailand have been demanding democracy for some time, but from 2009 the movement grew stronger, with the colour-coded political division. I am interested in politics, and I follow it through newspapers and TV. One day while I was working on a painting and watching the news of a demonstration, by chance a thought ran through my mind: democracy is like food -- good food which people like to eat. With that thought, a scene instantly popped into my head of the Democracy Monument floating in the sea.

"I sketched out the idea but somehow didn't like the four wings of the monument. At that time our prime minister happened to be a woman [Yingluck Shinawatra] whose nickname is Puu, meaning a crab. That made me think of using sea creatures -- prawn, shellfish, crab, fish -- for wings on the monument. 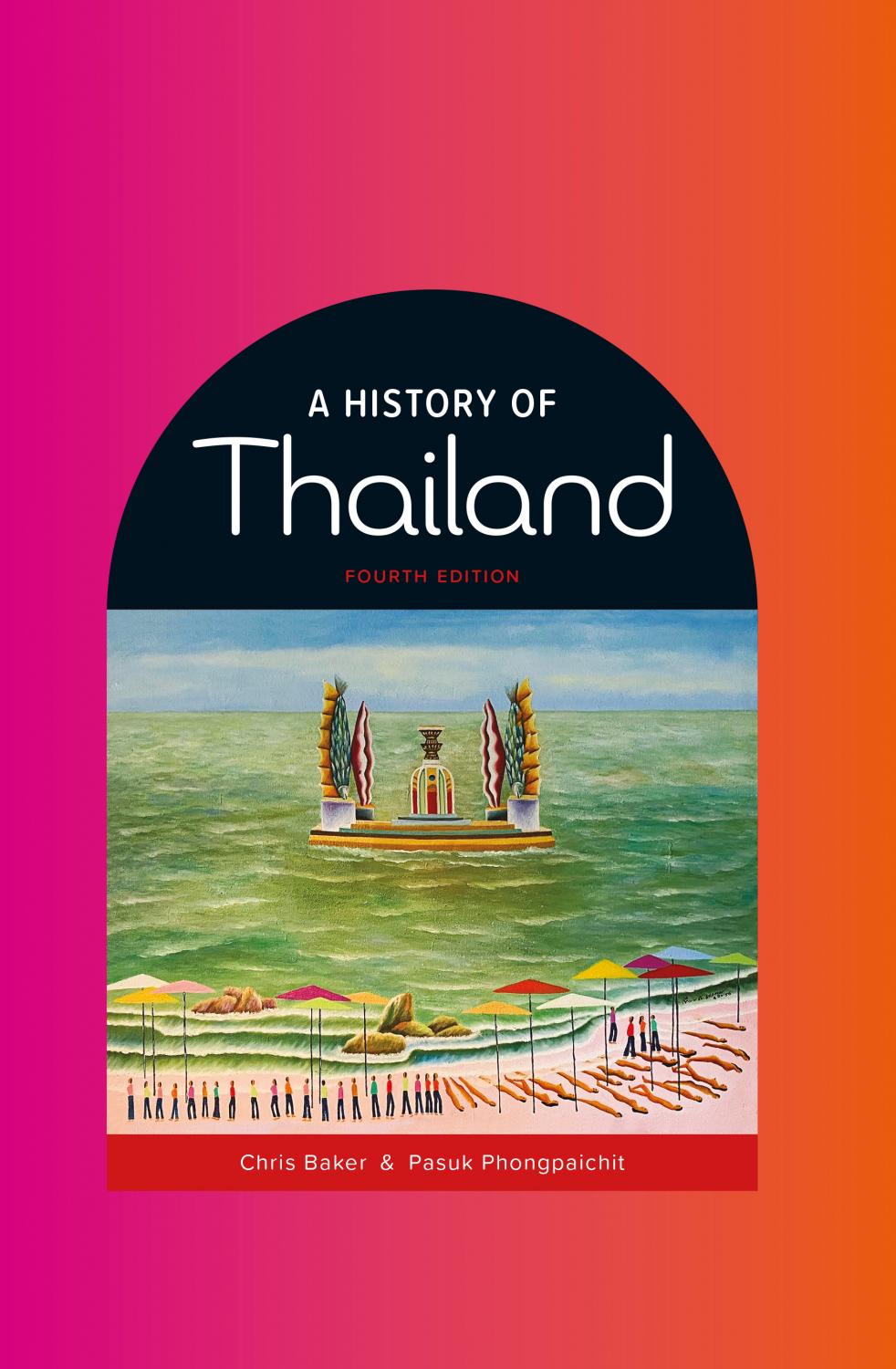 "Then I thought there had to be a beach, because it would be too plain without one, and that meant there had to be people walking on the beach, and some lying there sunbathing. And if the sunbathers were clothed it would not be so interesting -- more lively if they were unclothed. So the people walking on the beach are enjoying looking at both the Democracy Monument with its fishy wings and the naked bodies lying on the sand, but they are much more interested in the Monument, not distracted by the naked bodies at all. As for the sunbathers, they are not bothering anybody, not infringing on anybody's rights by showing off, just lying there, absorbing the vitamin D from the Sun, watching people in colourful dress, and seeing the Democracy Monument decked in seafood -- just lovely!

"In truth, it's a comparison between democracy and food, and specifically seafood because I live near the sea. And seafood is so good. Everyone likes eating deep-sea fish and deep-sea shellfish, in the same way they want to have a deep, full-blown version of democracy."

We loved it. Luckily the publisher loved it too. They got a design house to finish off the design. We expected a simple square framing of the painting. Their design made us gulp. They framed the painting with a dramatic arch in an outrageous blend of pink, orange and crimson.