Viewing the capital through creative lenses

You may already have heard of Bangkok being compared to Blade Runner made real, given our neon signs, skyscrapers, dingy alleys, huge billboards, elevated motorways and busy roads. Flaws and all, Bangkok has inspired many artists to reimagine it in their own way, shining a different light on our beloved capital city. Its unique aesthetic has captured the imagination of many artists and filmmakers, and Guru has compiled a few noteworthy reimaginations of Bangkok for your entertainment. 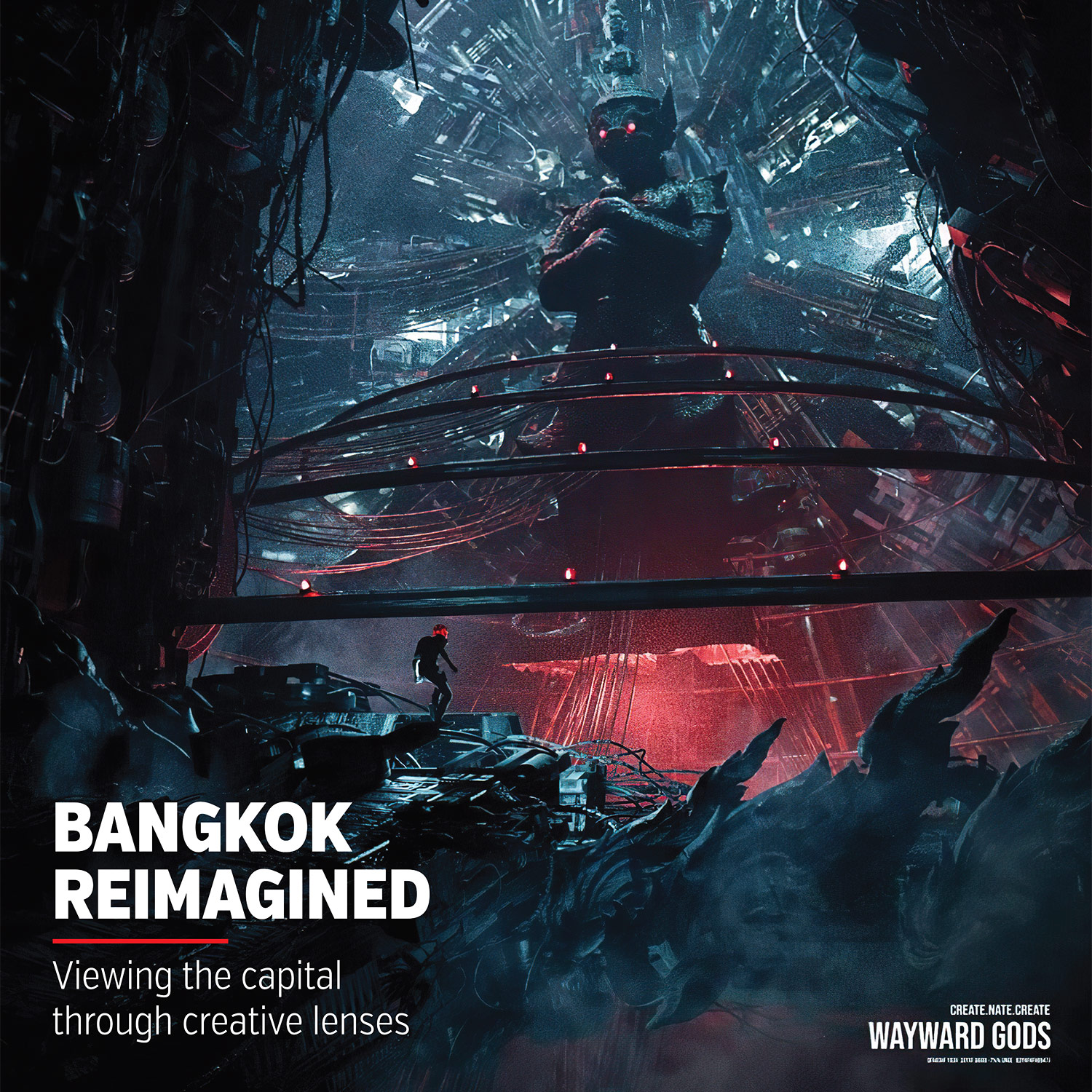 Described as a divine cyberpunk project based in Bangkok, Wayward Gods is the brainchild of Nate (eye in Thai) Pantumsinchai, the filmmaker of more than 20 years behind the "Create! Nate! Create!" YouTube channel and production company, Prime Studio. Despite being born in the US, Nate spent most of his time in Thailand and has lived here for more than 20 years. 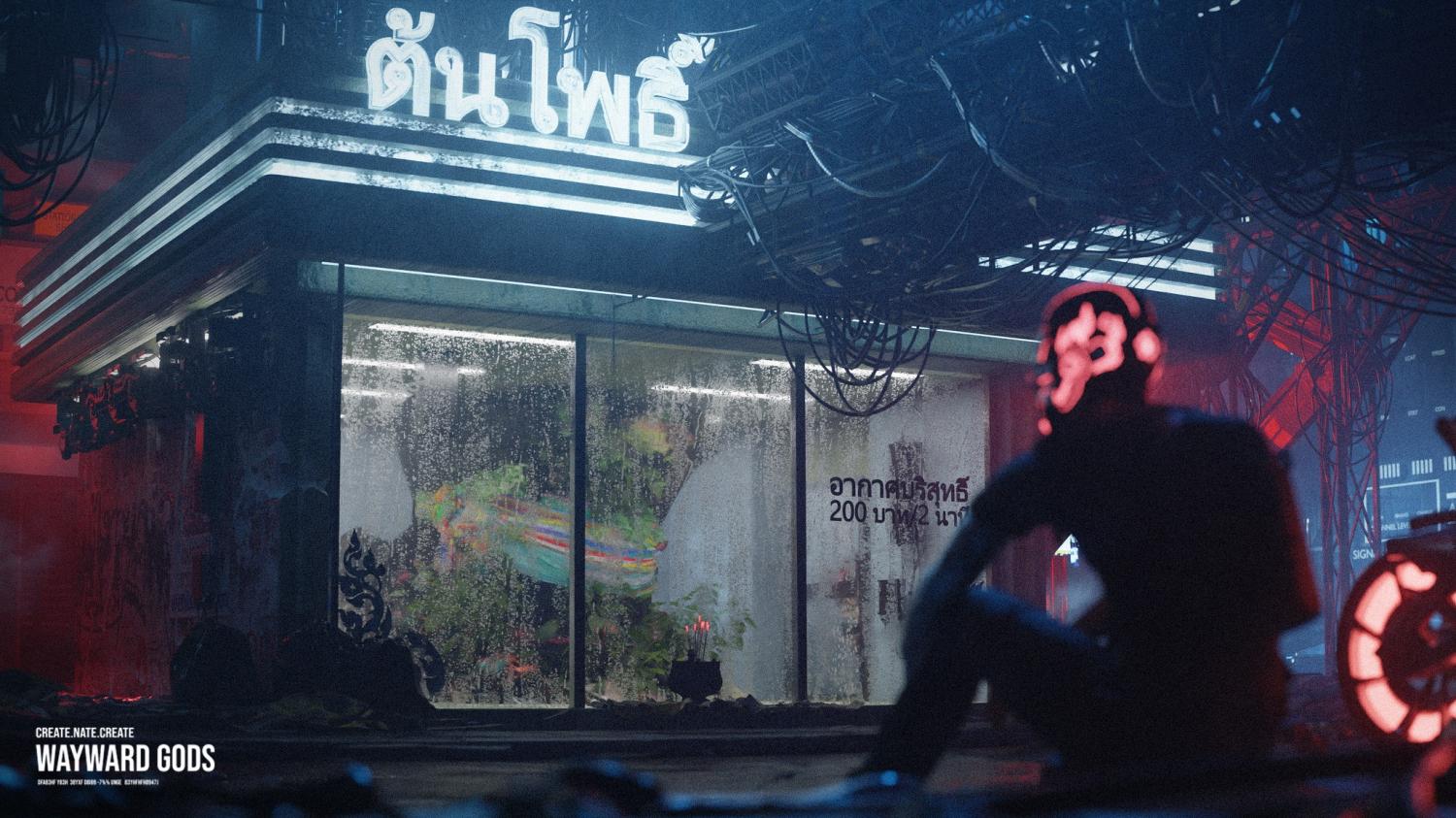 A self-taught filmmaker and VFX artist (who went to business school for marketing), Nate wanted to make a sci-fi film with Thai mythology, which he learned about from many temple visits while being raised Buddhist. As he grew older, he gains an appreciation for traditional Thai art and the craftsmanship that goes into it. However, it was only after he learned about creating visual effects on YouTube that he knew he had the right tool and skills to do his vision justice.

His current project "Wayward Gods" blends mythology, Thai culture, dark sci-fi plots and action with a dash of Ramakien. I won't spoil the whole lore (available on the project's website listed below) but if a guitar-wielding "Tetsugun" in Bangkok circa 26XX, Kaiju-size naga machine and deities trapped inside pagodas don't pique your curiosity, then I don't know what else will. 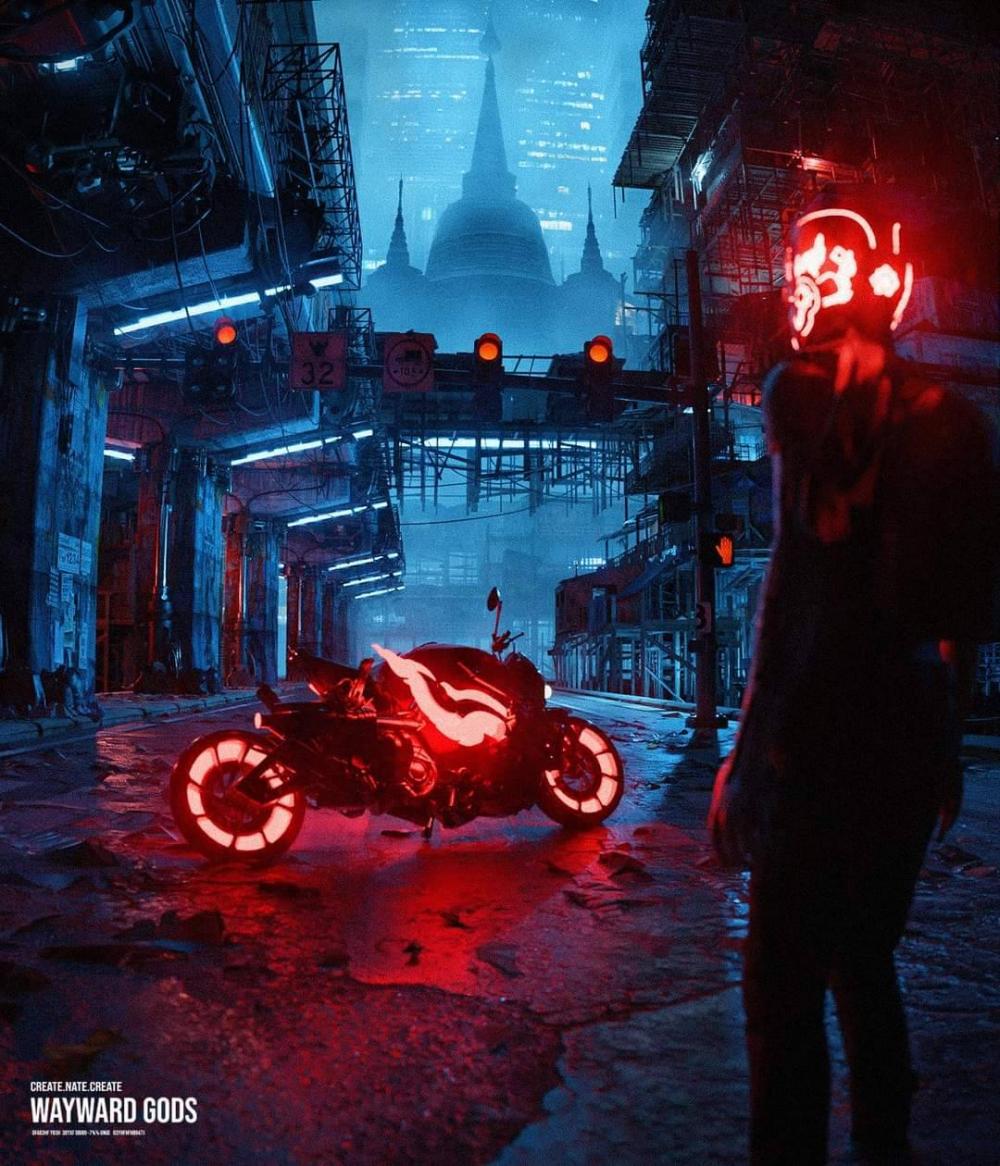 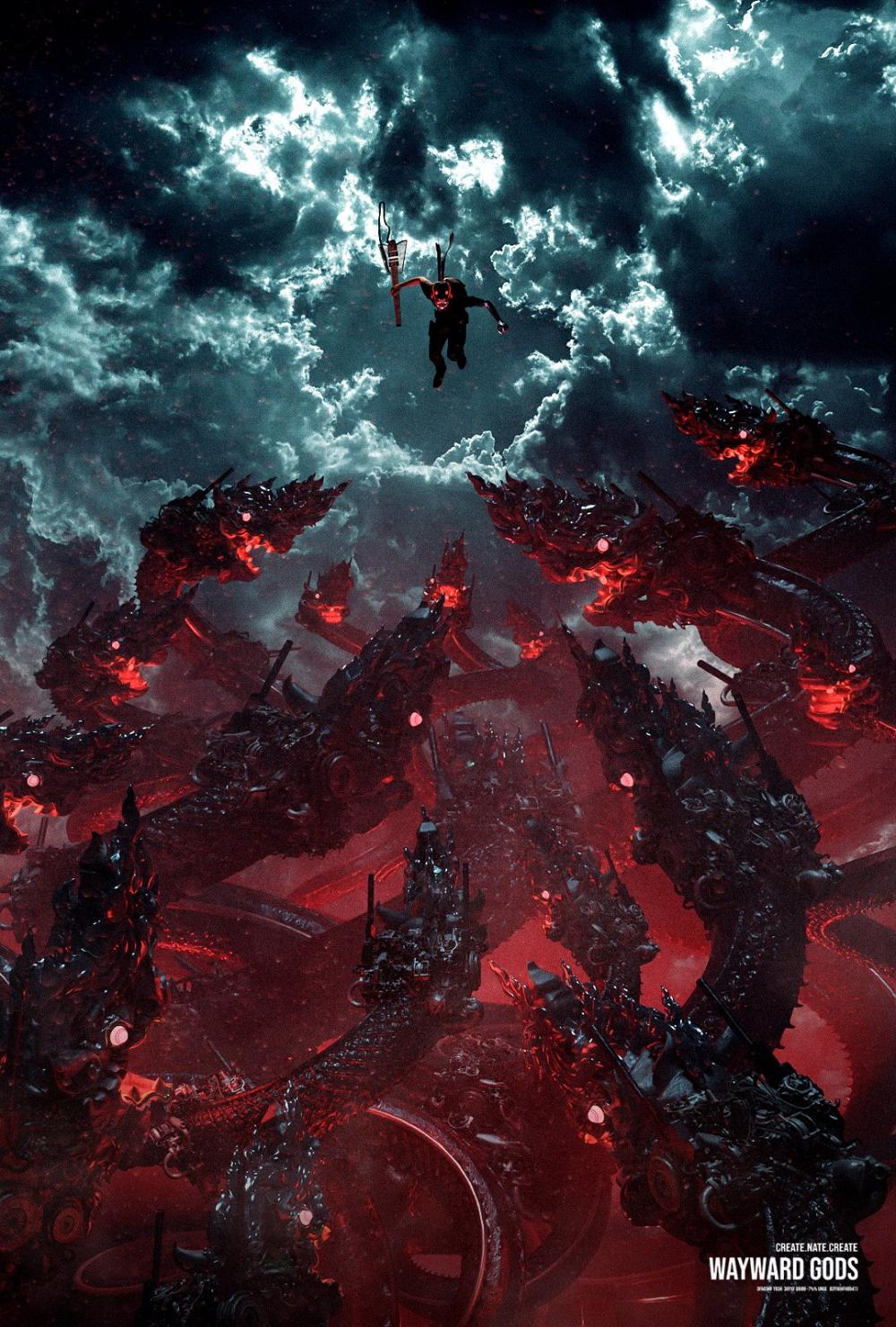 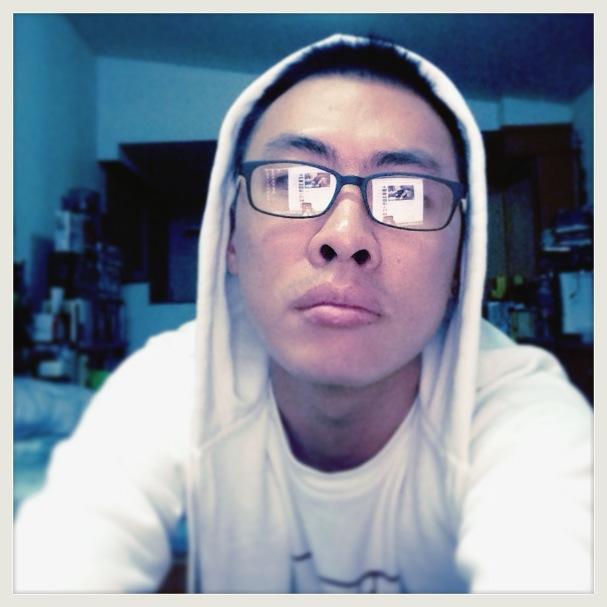 In the promo video and pictures, you'll be treated to a futuristic/apocalyptic vision of Bangkok that looks haunting and memerising. Tetsugun roams neon-lit dark city on his trusty motorcycle in his quest to regain his true powers and defeat the evil Naga Corporation, which plans to dominate all realms. "Wayward Gods" has garnered some interest from local movie studios already and it was part of the "Raeng Budan Thai" group exhibition at Silpakorn University in August.

Nate dreams big with this project as he plans to turn the project's aesthetic tangible into clothing items, crash helmets and even desserts! He's working on these prototypes with various collaborators. Of course, he is looking to turn this project into a proper film. Netflix, check his project out at waywardgods.net or fb.com/waywardgods.

Despite having only one solo show under his belt, painter Kamolchat "Jarmo" Pangtho has an unmistakable signature of blending dark sci-fi futurism with Thai myths and all things mysterious. 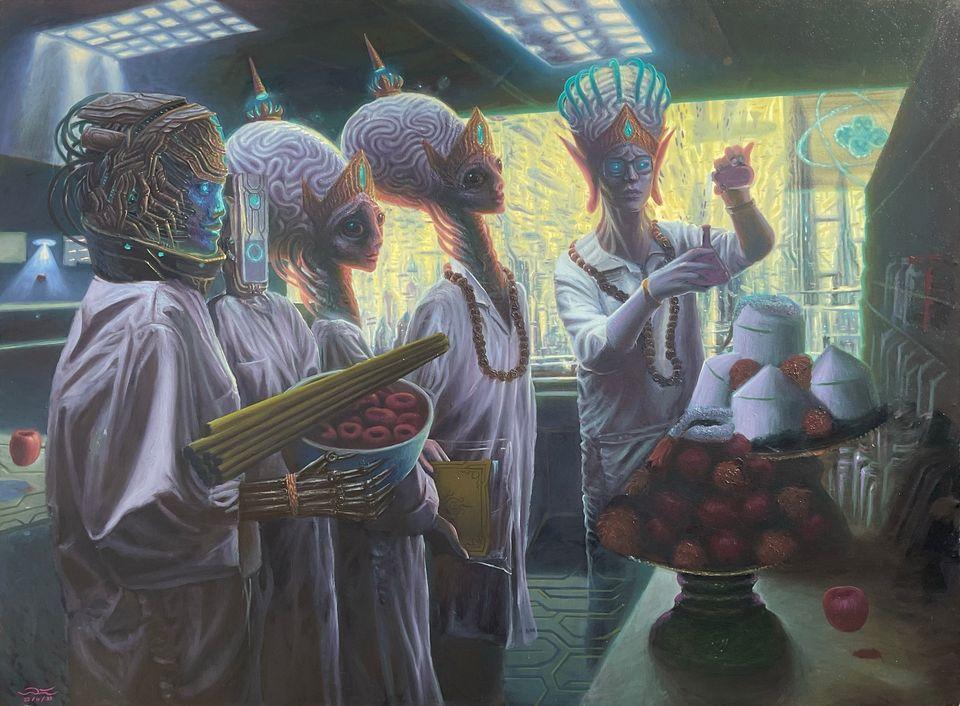 Growing up a fan of robots, sci-fi movies, Super Sentai, ghosts and funny Thai commercials, Jarmo discovered his passion for art when he drew a cartoon for a group assignment when he was in Matayom 5 before he decided to enrol at the Faculty of Painting, Sculpture and Graphic Arts, Silpakorn University. Even before his graduation, sci-fi and humour already popped up in his paintings. Think of a group of astronauts trying to tie a Ridley Scott xenomorph with sheer satin sheets like how Thais like to wrap a tree with the said sheet and pray for lottery numbers.

He had two group exhibitions at Kalwit Studio -- "Extremely Nonsense" in 2016 and "Errorism" in 2017, alongside other stars from Silpakorn. In 2019, he joined another group exhibition titled "Phénomène" at Joyman Gallery where he presented haunting portraits of extraterrestrials wearing chada headdresses and Thai costumes. He playfully compared the belief in Thai angels and ghosts with the belief in aliens and they seem neither provable nor disprovable. 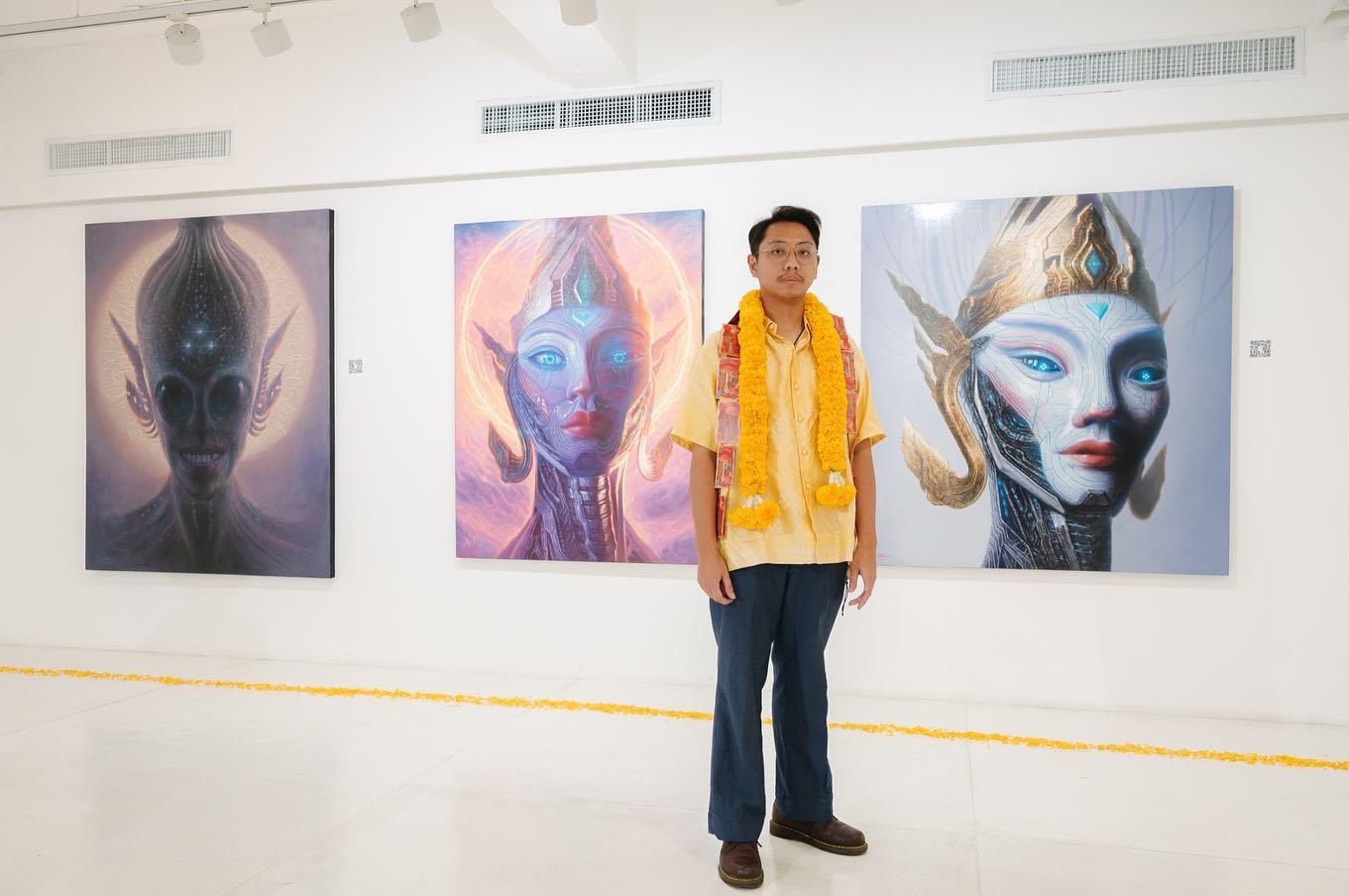 Then he came up with his own imaginary world where science and the supernatural coexist for his first solo show "Thyberpunk" at One Wall Art Foundation, which ended in February. While he is often described as a surrealist artist by the media, he feels his paintings lean towards the sci-fi side as he tries to present his way-out imagination in a realistic way.

Stephan Zlotescu has featured a futuristic/dystopian vision of Bangkok in several of his projects. He first came onto our radar with the short film True Skin, which depicts a dark future where enhancing your body with mechanical parts is the new norm and those who remain natural are lesser beings. It was shot in Bangkok and Pattaya. 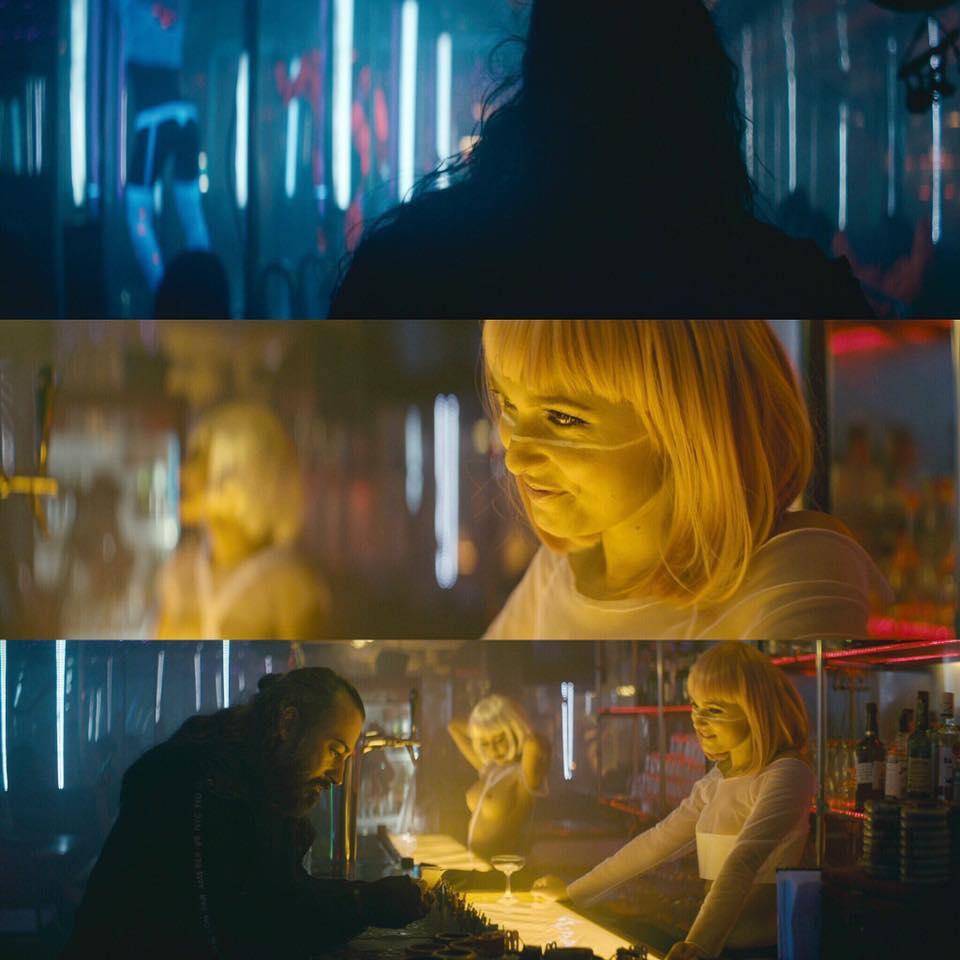 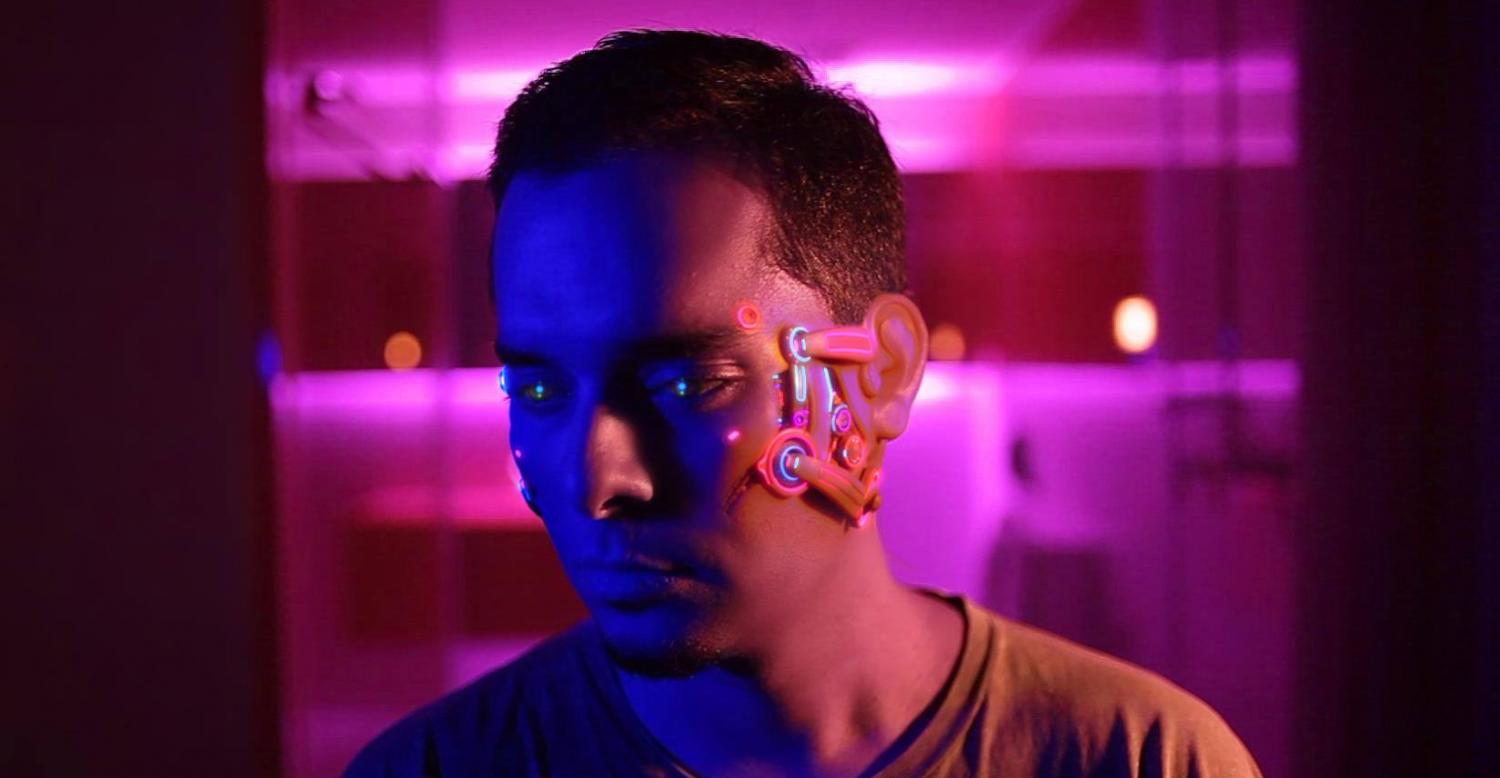 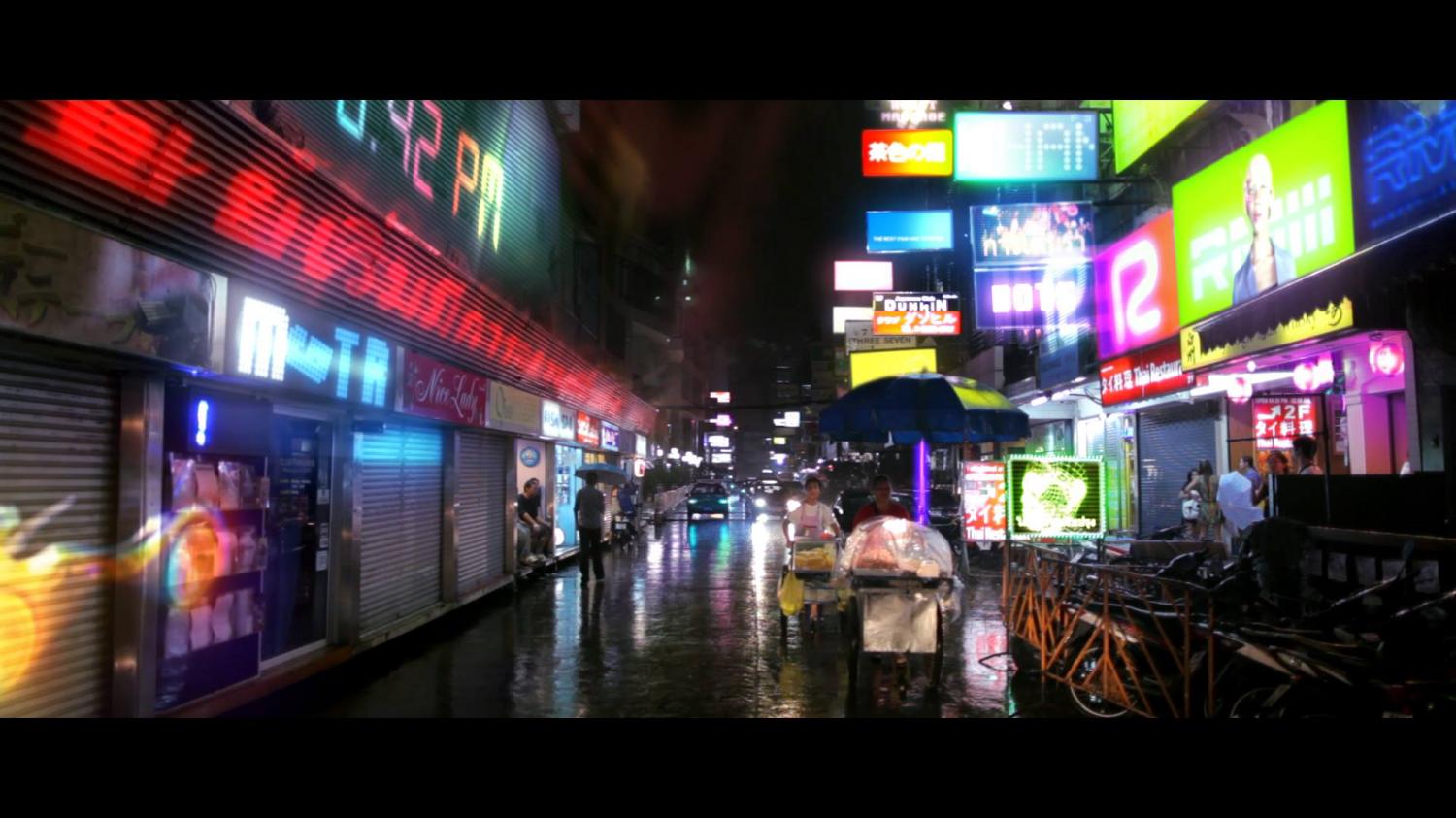 In 2018, he released Future Sex, a sci-fi edgy five-part series that explores techno-sexual interactions in the future and illuminates us on what is to become of sex via app Blackpills. All shot in Bangkok by a local cast and crew at filmcubebkk.com.

Most recently, he co-directed AI Love You with David Asavanond, which was released on Netflix in February. This drama sci-fi film is about an AI falling in love with a woman named Lana (Pimchanok Luevisadpaibul) and taking over the body of a man named Bobby (Mario Maurer) in order to pursue her. Despite not-so-welcoming responses from local critics, you should still check it out for smart robots/buildings and a candy-colour future.

What if it snows in Bangkok? Given that the heat dominates our weather calendar all year round, it's easy to daydream a scenario where Bangkok is covered in snow for a change. 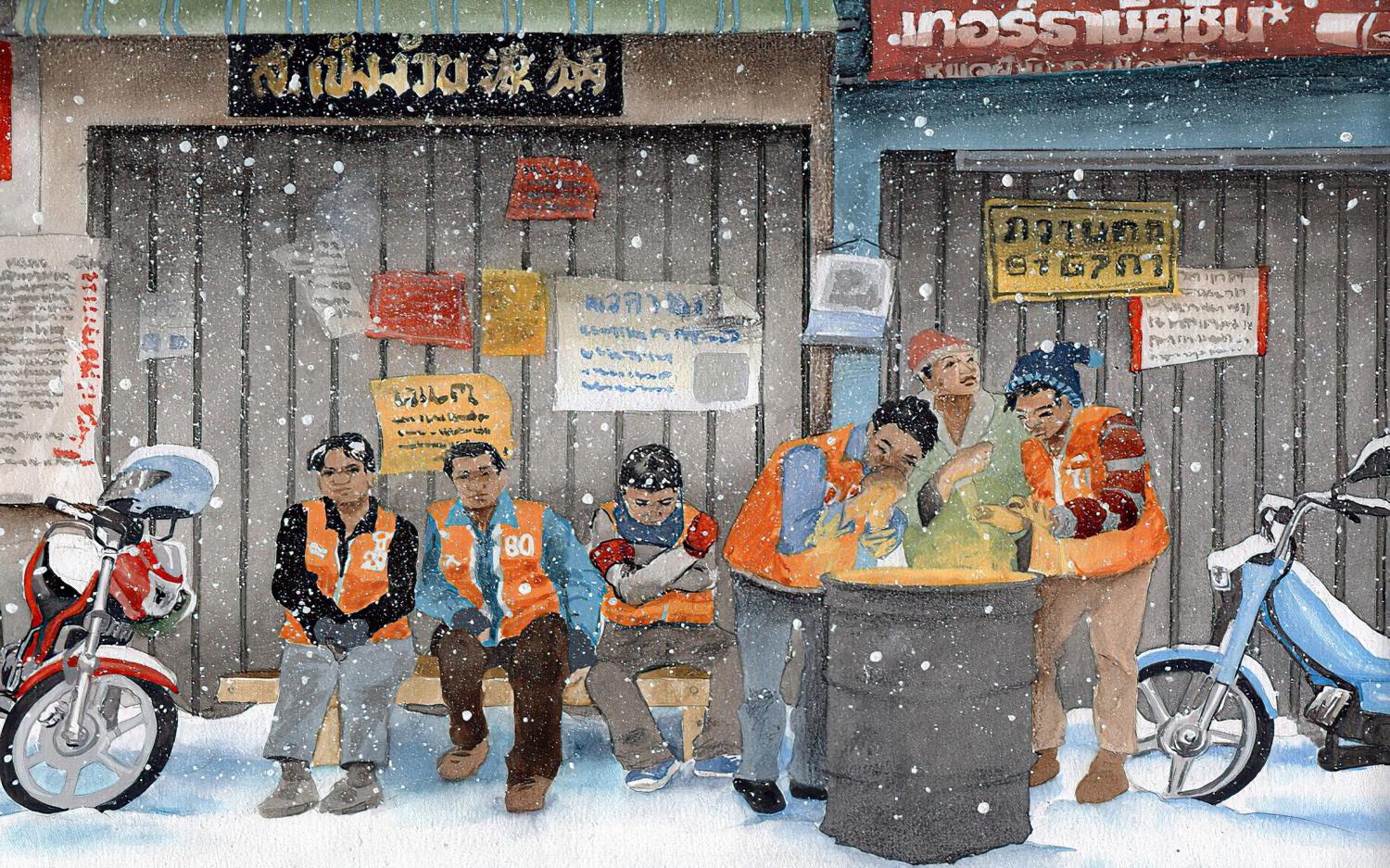 Enter Bangkok Snow Removal, a company with a curious name set up by Canadian expat Tim Cornwall. According to his interview with a day, a retouched picture of The British Club Bangkok covered in snow made by a graphic designer more than 12 years ago impressed him so much since the technology wasn't as advanced as today. He later met an artist who sold B10 postcards next to an escalator at BTS Mo Chit and asked them to draw BTS stations in Bangkok in two versions; one with snow and the other without. These pictures got turned into postcards, calendars, T-shirts and bags.

However, the snowy Bangkok series that Bangkok Snow Removal is known for was created in collaboration with a Parisian illustrator named Caroline Seiller, who lived in Thailand for five years and met Cornwall. Their collaboration resulted in a whimsical and amusing depiction of Bangkok in real winter where people had to adjust to the snow. Think Bangkokians in full winter gear huddling around a coffee cart to drink hot coffee, kids making snow angels in front of the 7-Elevens, motorcycle taxi drivers burning something in an oil barrel to keep warm and stray dogs wearing sweaters. While the illustrations may not actually cool your body down, they should help you keep jai yen. Check out magnets, coasters and prints featuring chilly Bangkok on their website at bangkoksnowremoval.com.

Join the Midjourney Thailand Facebook group and you'll find a galore of imaginary Thailand created by AI from 72,000 strong members, ranging from a futuristic take on traditional costumes to the arrival of aliens from when Thailand was called Siam. 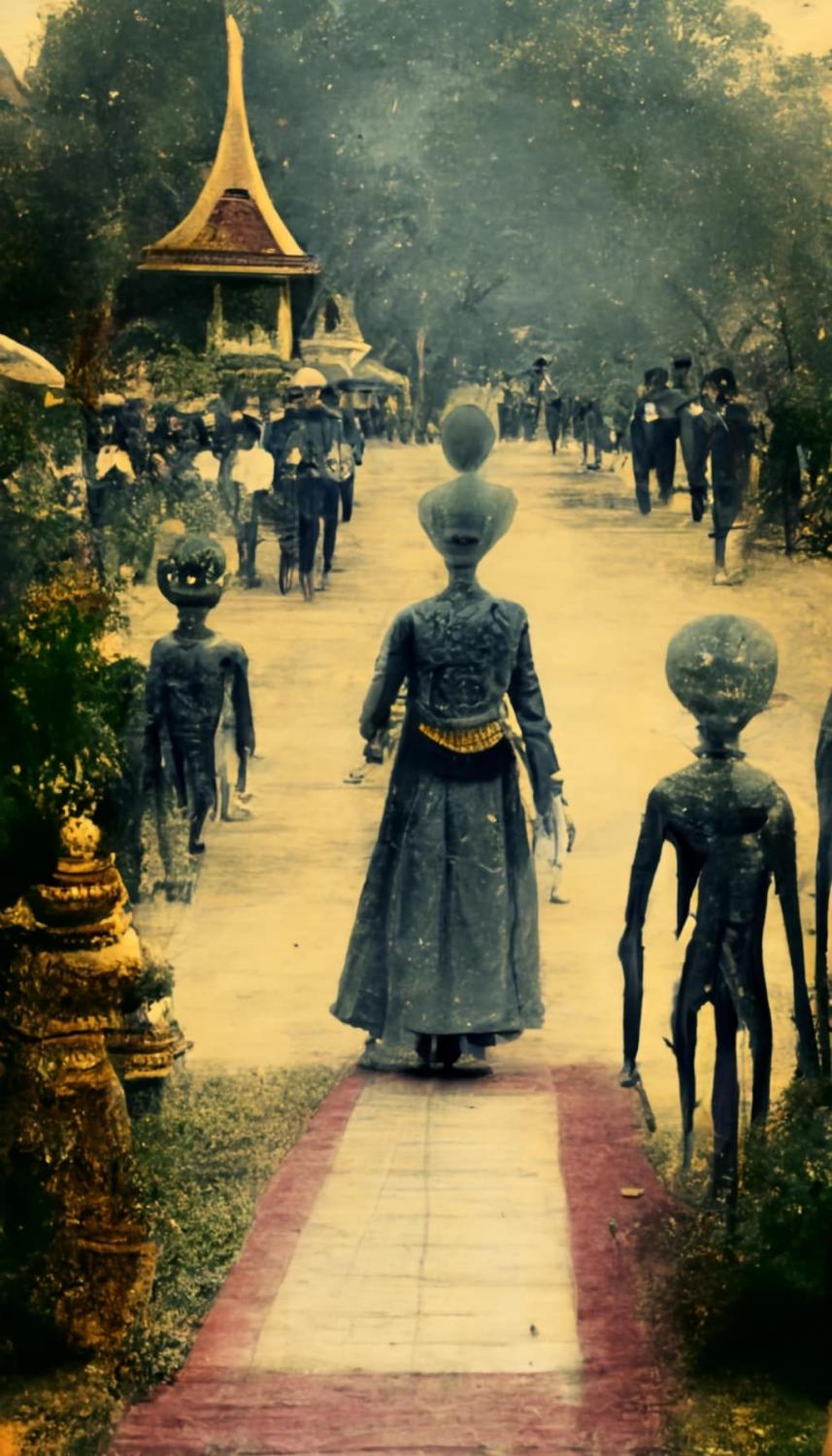