To raise awareness and encourage manufacturers to reduce salt and sodium in food products, the Thai Health Promotion Foundation (Thai Health) organised a forum titled "Reducing Salt/Sodium Consumption In Thailand" at the Thai Health office. At the forum, Dr Chantana Ungchusak, chairman of the board of healthy food planning, said that excessive salt intake can cause high blood pressure, heart conditions, reduce kidney functions and clog blood vessels, which can lead to death.

"In 2020, Thais consumed an average of 3,636mg of salt per day, which exceeds the World Health Organization's maximum recommended limit of 2,000mg per day. If Thais can change their consumption behaviour by reducing sodium intake to 700 or 800mg per day, it will reduce the risk of heart disease and clogged blood vessels by 20% and deaths by 5-7%," said Dr Chantana.

"Establishing a public policy for reducing salt and sodium intake is effective and worthy of investment. Studies in many countries have reported that salt and sodium reduction can save healthcare costs. For example, a lower salt intake of 3g per day in the US has saved its national healthcare cost by at least 36 billion baht per year," said Dr Chantana. 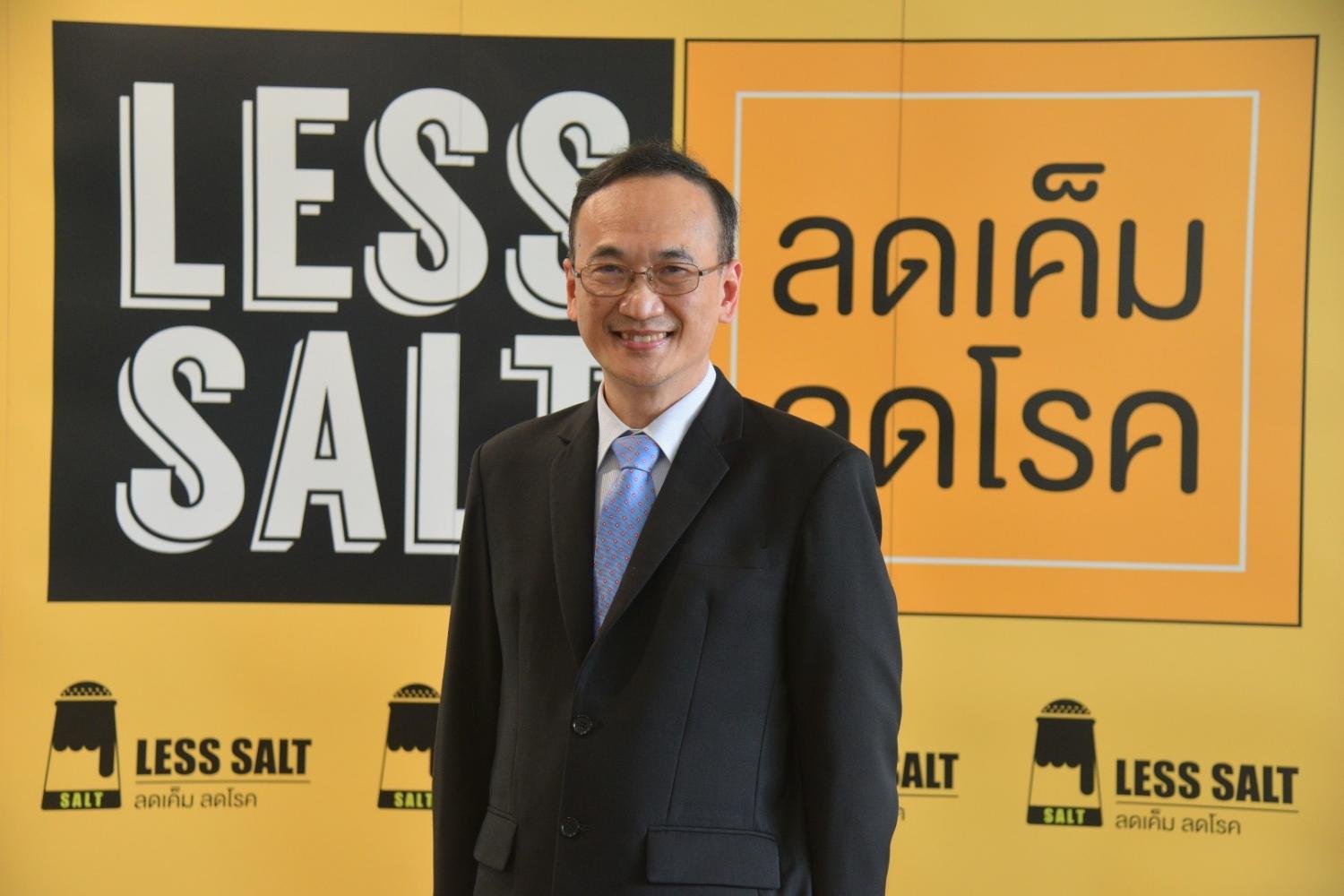 Dr Olivia Nieveras, a medical officer specialising in noncommunicable diseases at WHO Thailand, said the agency has set the global benchmark for sodium levels to not exceed 2,300mg per day and aims to reduce global sodium consumption by 30% in 2025.

Assoc Prof Dr Surasak Kantachuvesiri, president of the Network for Reduced Sodium Consumption, said the network is a collaboration between the private sector and state agencies to reduce sodium intake. The Network for Reduced Sodium Consumption annually presents its research findings and campaign results. This year, the network surveyed the amount of sodium in food products after several years of raising awareness about reducing sodium intake. In collaboration with The Nephrology Society of Thailand, the survey collected data and information on four types of food -- frozen food, convenience food, snacks and condiments.

"The survey found that frozen food [53 products] contained 890mg of sodium per package, which is above WHO's recommended amount of 600mg for one meal. Convenience food [300 products] such as instant noodles, instant congee and instant soup contain an average of 1,240mg per package, which is double WHO's benchmark. Snacks [400 products] including potato chips, rice crisps, peanuts, seaweed and fish snacks contain 320mg of sodium per package. For snacks, the WHO has set the sodium average at 200mg. Condiments [100 products] such as fish sauce, soy sauce, seasoning powder and bouillon cubes contain 758mg per package," said Dr Surasak. 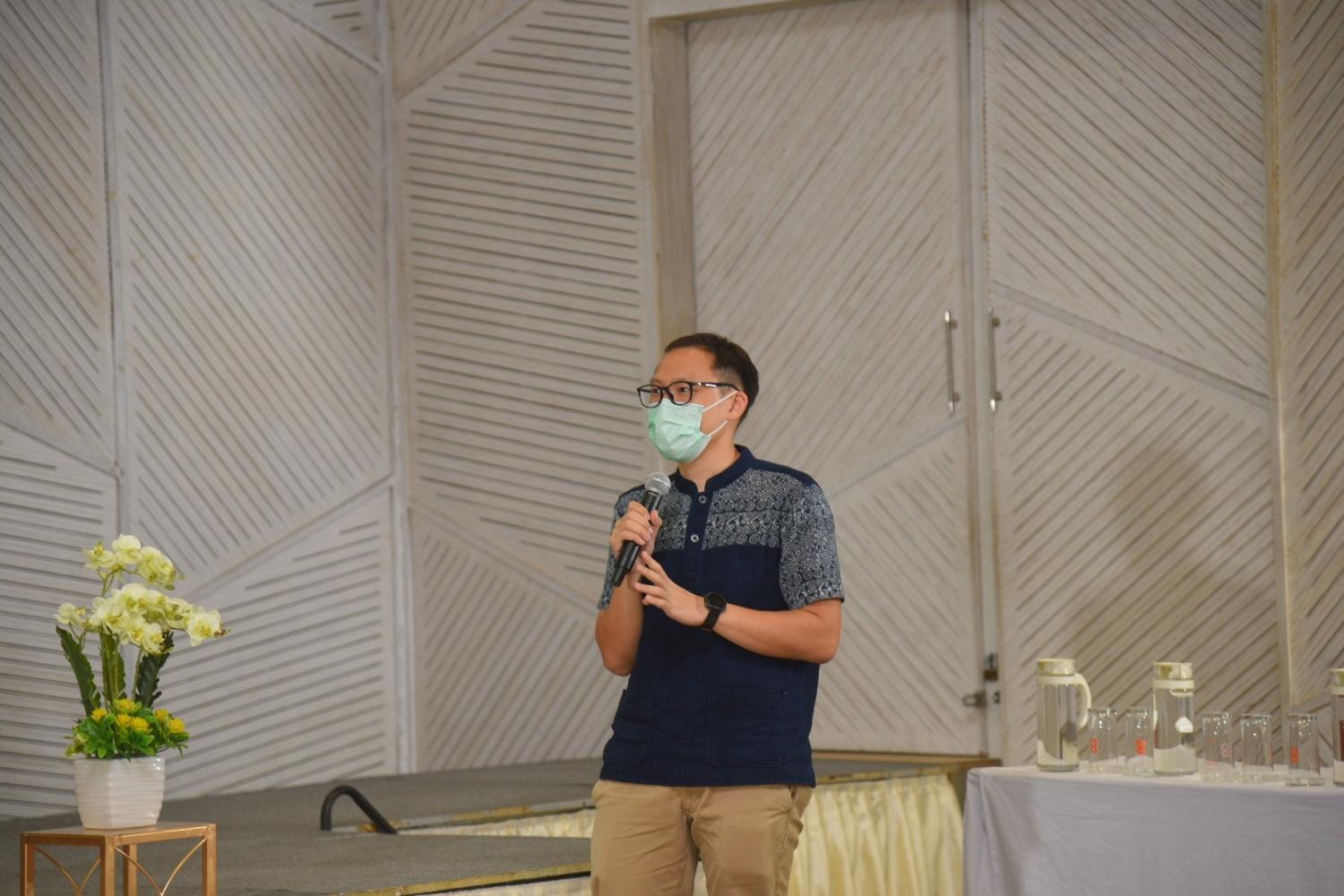 At the forum, two nutritionists also presented their research about sodium. Dr Chanathip Chailek, a medical doctor and graduate student at the Faculty of Public Health, Mahidol University, conducted research about the amount of sodium in convenience food in Thailand between 2018 and 2021. Meanwhile, Wassana Narasri, a nutritionist at the Institute of Food Research and Product Development (IFRPD), Kasetsart University, studied the amount of sodium and sodium chloride in condiment products. 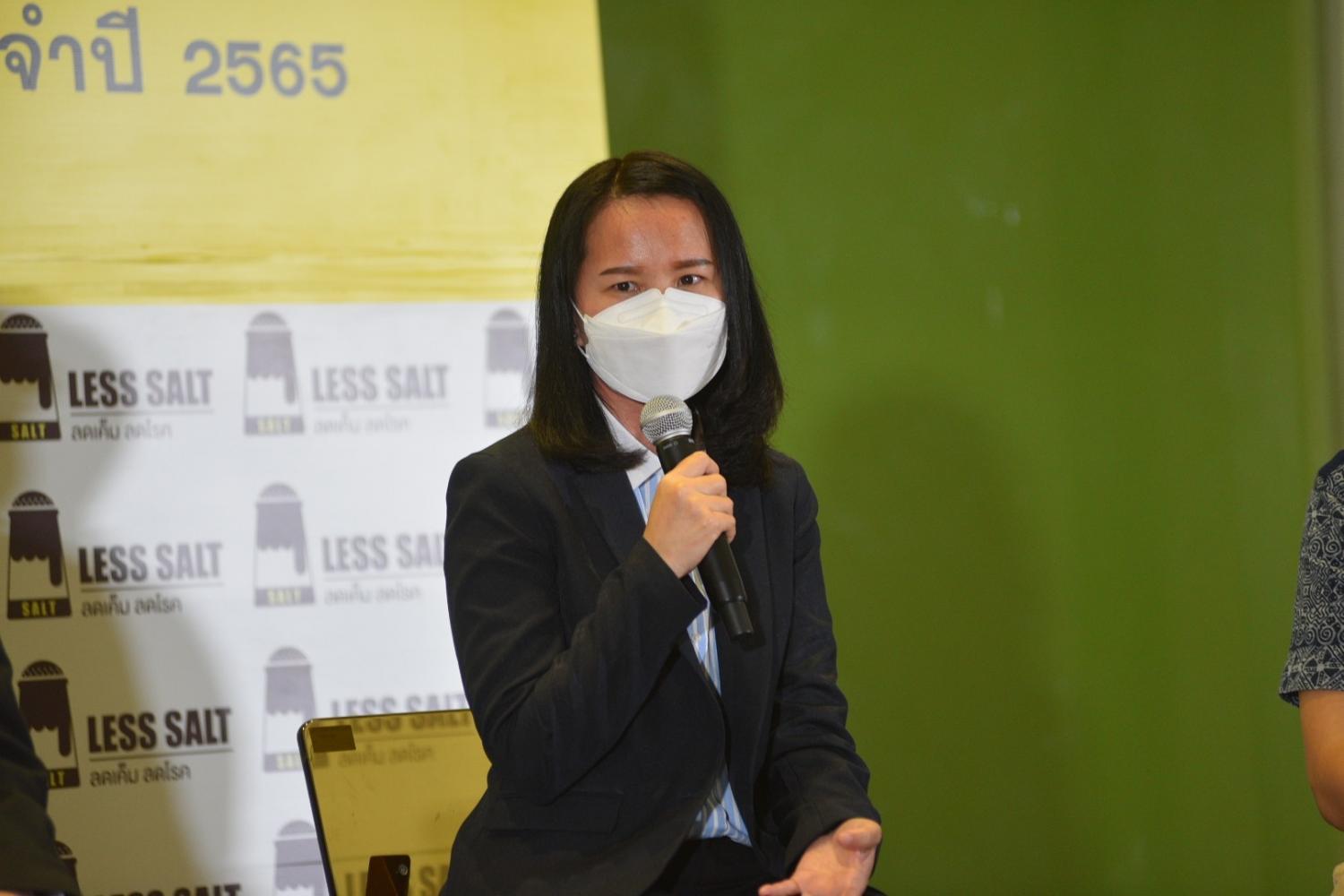 Wassana Narasri, nutritionist of the Institute of Food Research and Product Development.

Dr Chanathip surveyed 57 products and discovered that 19 (33.3%) contained lower amounts of sodium than before while 11 (19.3%) had increased the level of sodium. Instant congee and instant rice porridge in 2021 contained less sodium than in 2018, while instant noodles maintained a similar amount of sodium. In total, more instant congee and instant rice porridge products (from 6.5% in 2018 to 45.8% in 2021) received the healthier choice logo. Products from South Korea and Japan had more sodium than Chinese and Thai products.

The nutritionist Wassana said she conducted research about condiments because they are an important part of meals whether we eat homemade food or eat at restaurants. Wassana collected 252 samples and found that 82% of items did not have nutrition fact labels. The condiments in her research were divided into bouillon cubes, seasoning powder, MSG, soup powder and snack seasoning.

"I collected samples from supermarkets and convenience stores, so these products are easy to find. From the study, two brands from a total of 20 bouillon cubes had reduced 88% of their sodium levels and became popular products which sold out quickly. Sodium in bouillon cubes is not salt, but MSG and other substances to add flavour, they do not have a salty flavour," said Wassana.

From the condiment research, Dr Surasak commented that the Food and Drug Administration should require condiment manufacturers to provide nutritional facts on their products. 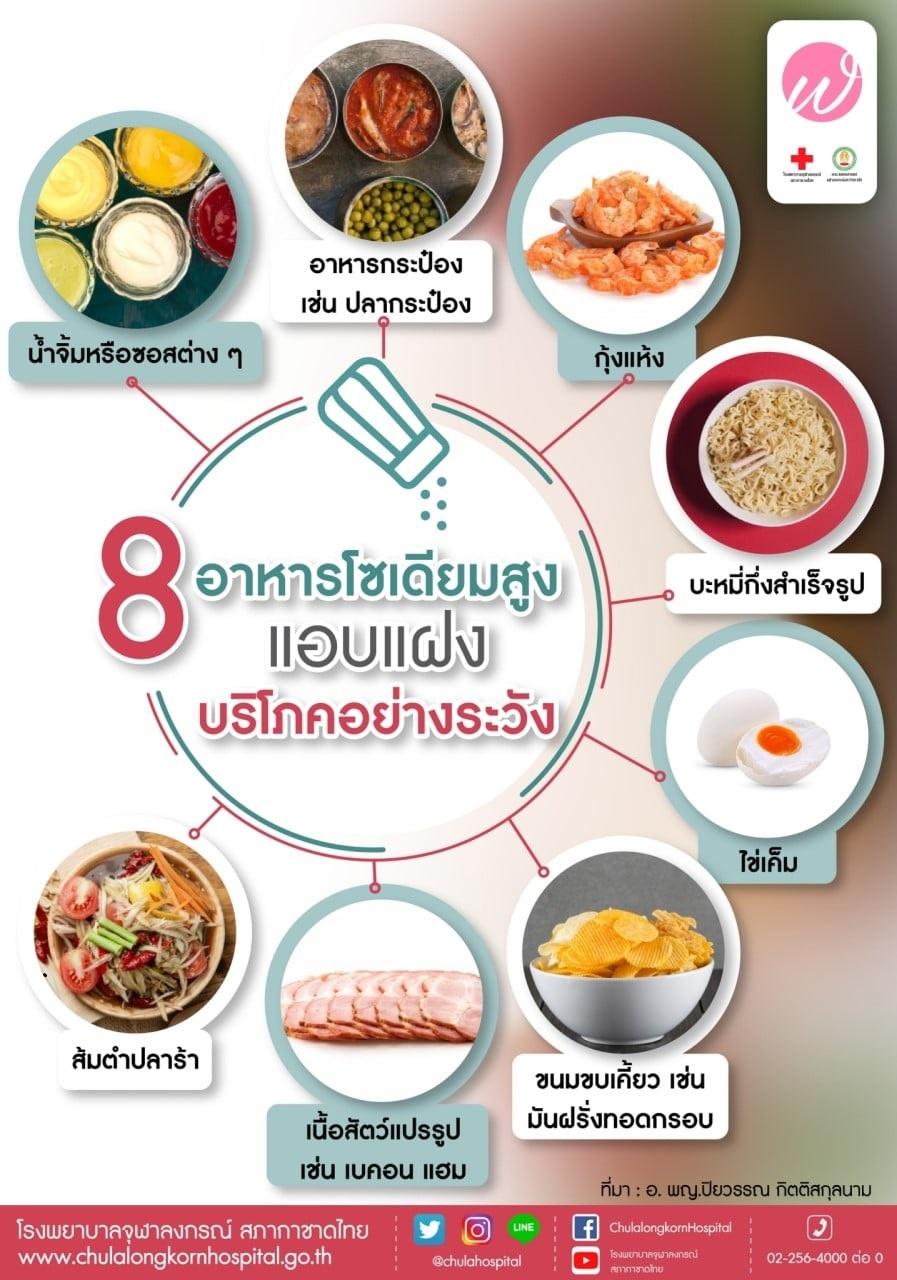 "Last year, the Network organised a training workshop with celebrity chef Yingsak Jonglertjesdawong up North. Representatives from 60 restaurants participated in the training. Yingsak taught them how to adjust their recipes to contain lower amounts of sodium. After that, each restaurant developed its own recipes and sent them to Yingsak and the Network's nutritionists to be reviewed. If sodium in recipes was reduced and customers approved of the flavours, the restaurants would receive the 'low sodium' logo. The Network will organise this kind of training in other regions next year," said Dr Surasak.

One policy that will make sodium reduction effective is an excise tax on salty and processed foods. Dr Surasak said Health and the Excise Department has already drafted a salty tax regulation.

"The draft regulation had been put on hold due to Covid-19 since manufacturers had difficulty selling their products. Manufacturers which make products with higher levels of sodium than the standard level will have to pay taxes while manufacturers with the accepted standard may receive tax exemption. The purpose of the tax is to encourage manufacturers to reduce sodium in their products. This law will be enforced three years after the tax regulation is launched. It takes time to adjust product flavours and consumer acceptance. If consumers cannot accept low sodium products, the regulation will not work," said Dr Surasak. 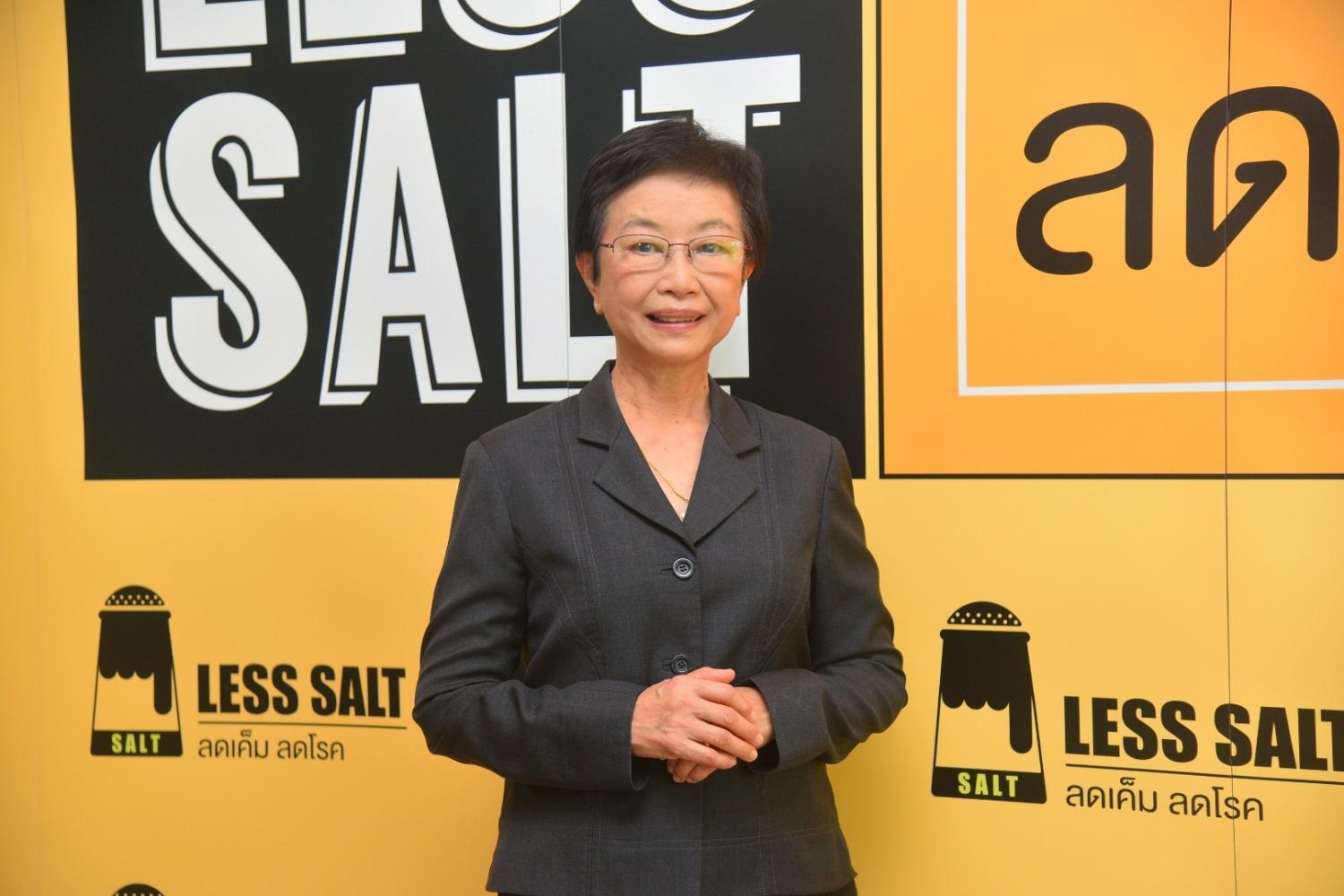 Dr Chantana Ungchusak, chairman of the board of healthy food planning at the Thai Health Promotion Foundation. 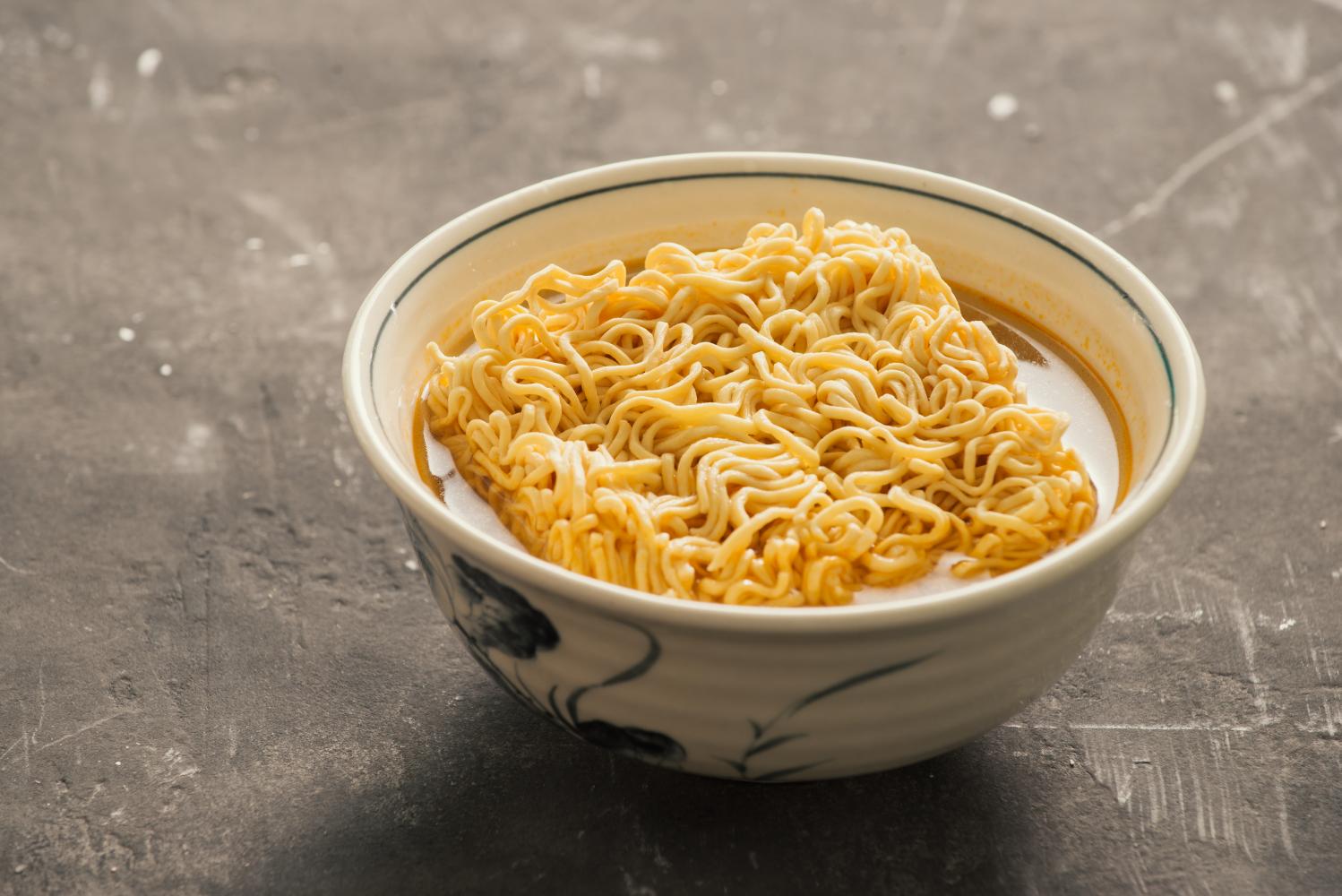 Convenience food such as instant noodles contain an average of 1,240mg per package or double the World Health Organization's benchmark. (Photo © 123rf.com)