"It was an early stage of the brand but I was really impressed how Parmigiani Fleurier became so prestigious in a short amount of time," recalled Terreni, who took the helm last year when the company celebrated its 25th anniversary.

Michel Parmigiani founded his eponymous atelier in 1996. Three years later he introduced the Toric QP Retrograde, whose bezel features alternating gadroons and knurling that would become one of the brand's aesthetic signatures.

The 72-year-old founder is a living legend in watch restoration, and restoring antique timepieces made him acquire expertise of watchmaking crafts.

"When Michel Parmigiani created the brand, it wasn't about doing business," said Terreni. "He wanted to pay tribute to watchmaking tradition, and it's really a cultural exercise to perpetuate mechanical art." 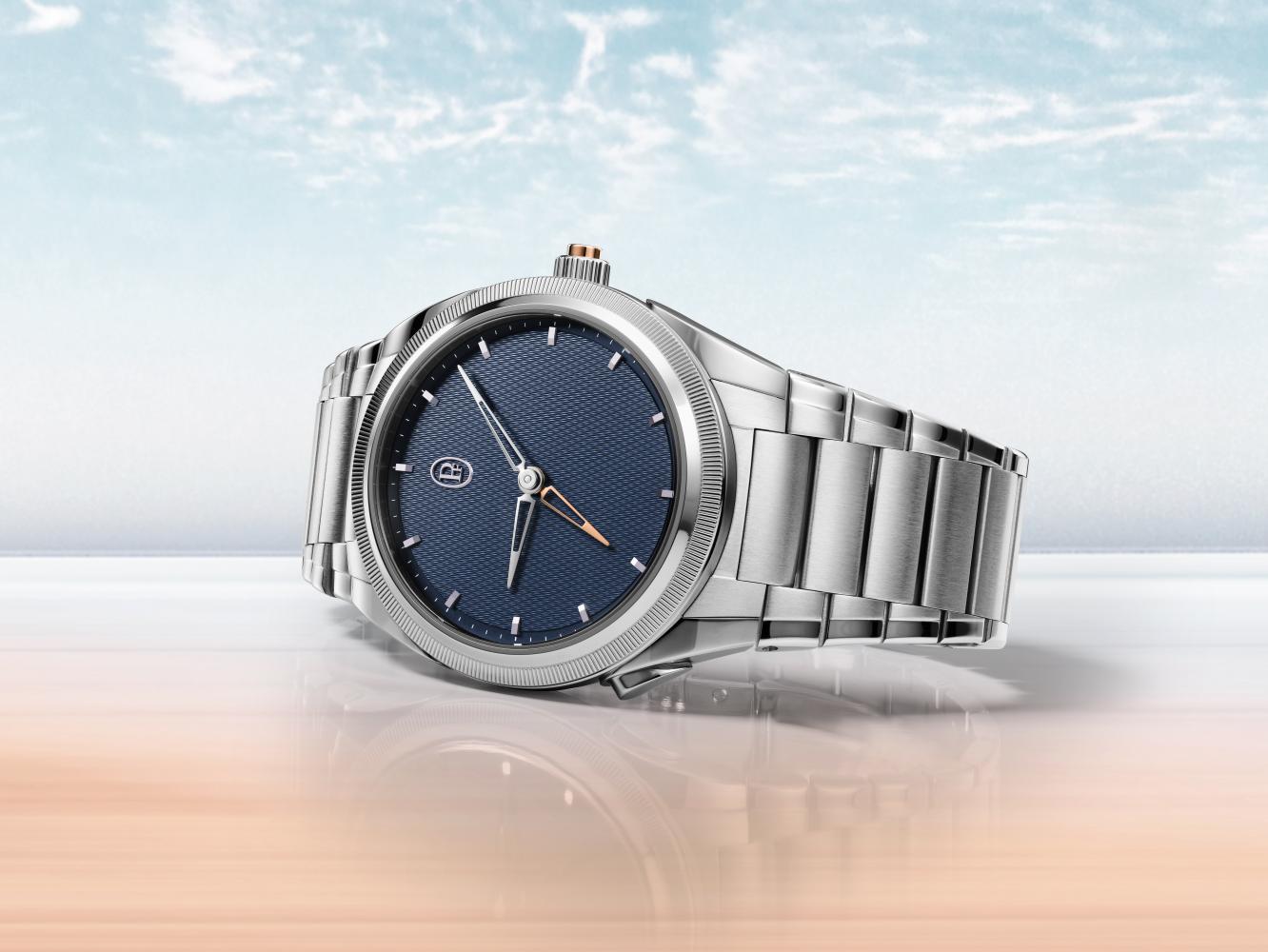 Tonda PF GMT Rattrapante, the world's first dual-time watch that operates with the user-friendliness of a chronograph.

The Milanese of dual Swiss-Italian nationality noted how the "craftsmanship of mechanical watchmaking and art mechanics" has been inscribed on the Representative List of the Intangible Cultural Heritage of Humanity.

This resonates with the brand's perpetuation of mechanical art, and Terreni believes in Parmigiani Fleurier's capability to express the Swiss horological heritage at the highest level.

Moreover the vertically integrated industrial structure enables the brand to master the full range of watchmaking expertise. Designwise, its wristwatches carry a timeless and understated style.

"We have to preserve this strong identity but keep in mind that what attracted our clients 26 years ago may not be relevant now," said the CEO.

"It's like how people are not into clothing styles worn by their grandfather and father, and they wear something less formal with an easygoingness. So we're evolving our watches to speak to today's watch connoisseurs." 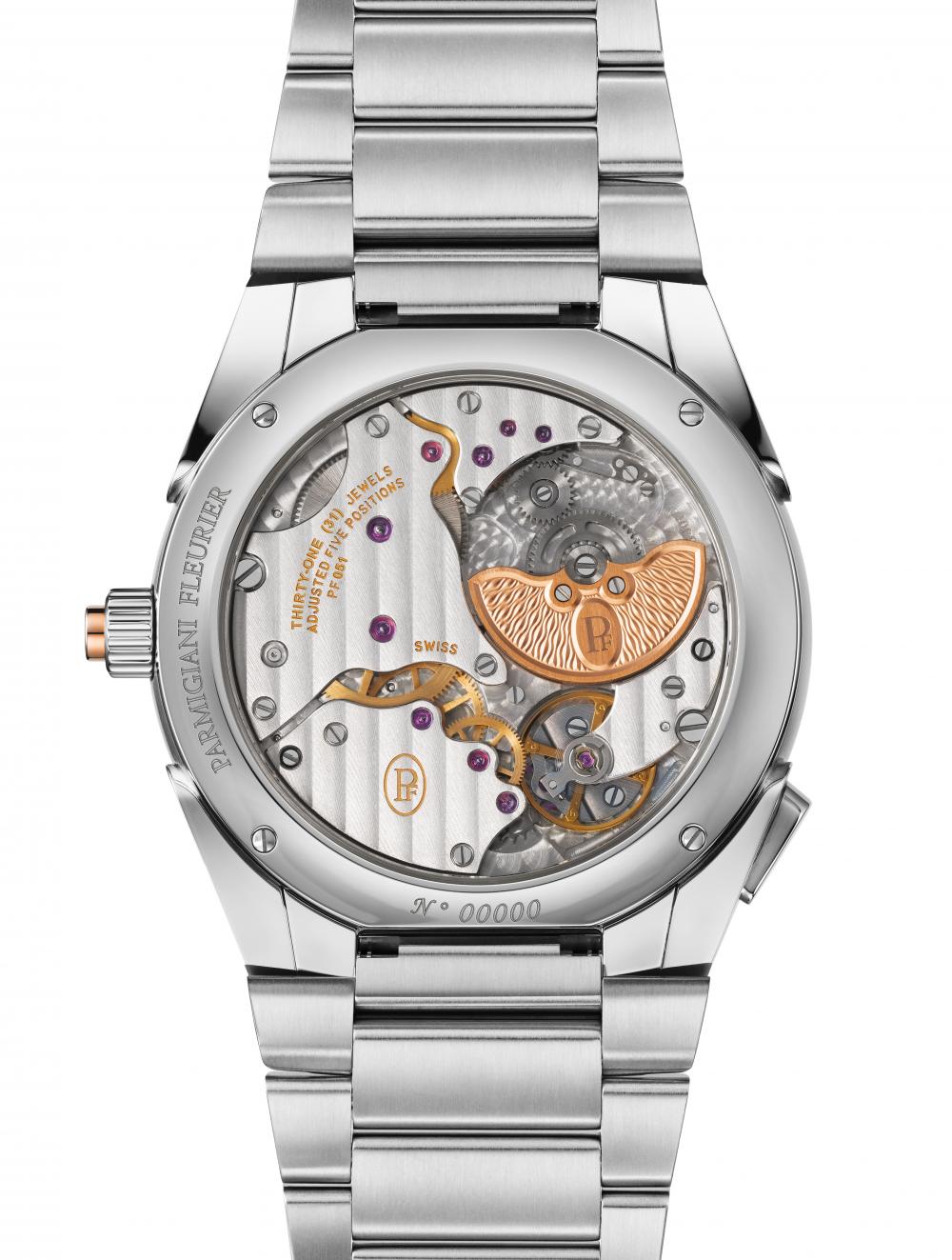 As a young and independent brand, there is more freedom to elevate haute horlogerie, Terreni said. Parmigiani Fleurier is rewriting tradition on its quest for purism combined with innovation, as reflected in the Tonda PF GMT Rattrapante -- the world's first dual-time watch that operates with the user-friendliness of a chronograph.

In maintaining the minimalism, the 40mm stainless steel model features an innovative yet simple-to-use mechanism that preserves its understated nature. 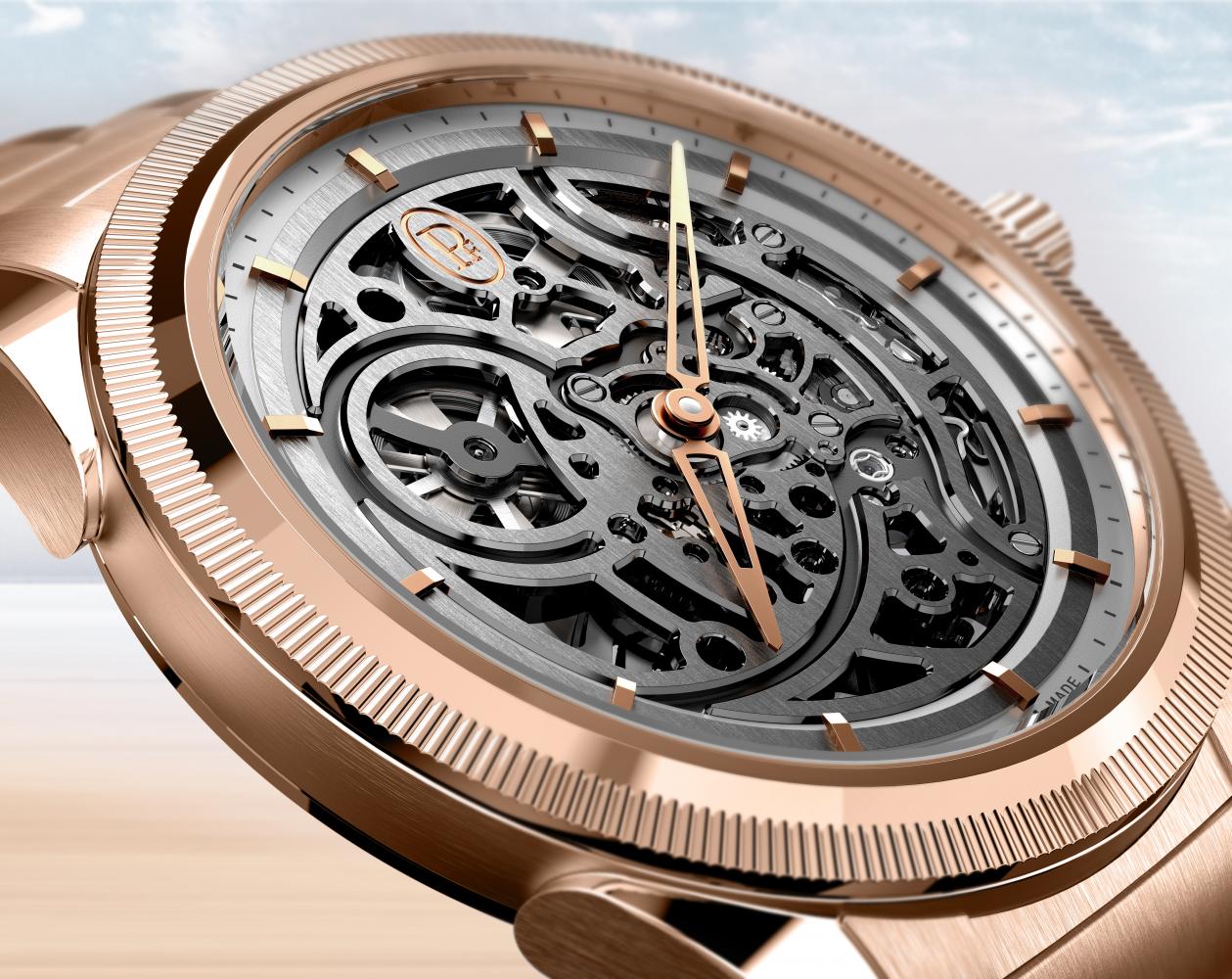 "In watchmaking there is a permanent tension between aesthetic and technique, as if there are two separate worlds that must coexist," said Terreni.

"To me, the way you develop a complication has incredible implications on the mood of the watch and hence on its design. The Tonda PF GMT Rattrapante pushes the boundaries of watchmaking, reinventing one of the most coveted and useful functions and embodying Parmigiani Fleurier's discreet, unostentatious spirit through uncompromising technical choices."

Pressing the crown-integrated rose gold pushbutton repositions the rhodium-plated hand on top of the rose gold hand in the same manner as a split-seconds chronograph hand. 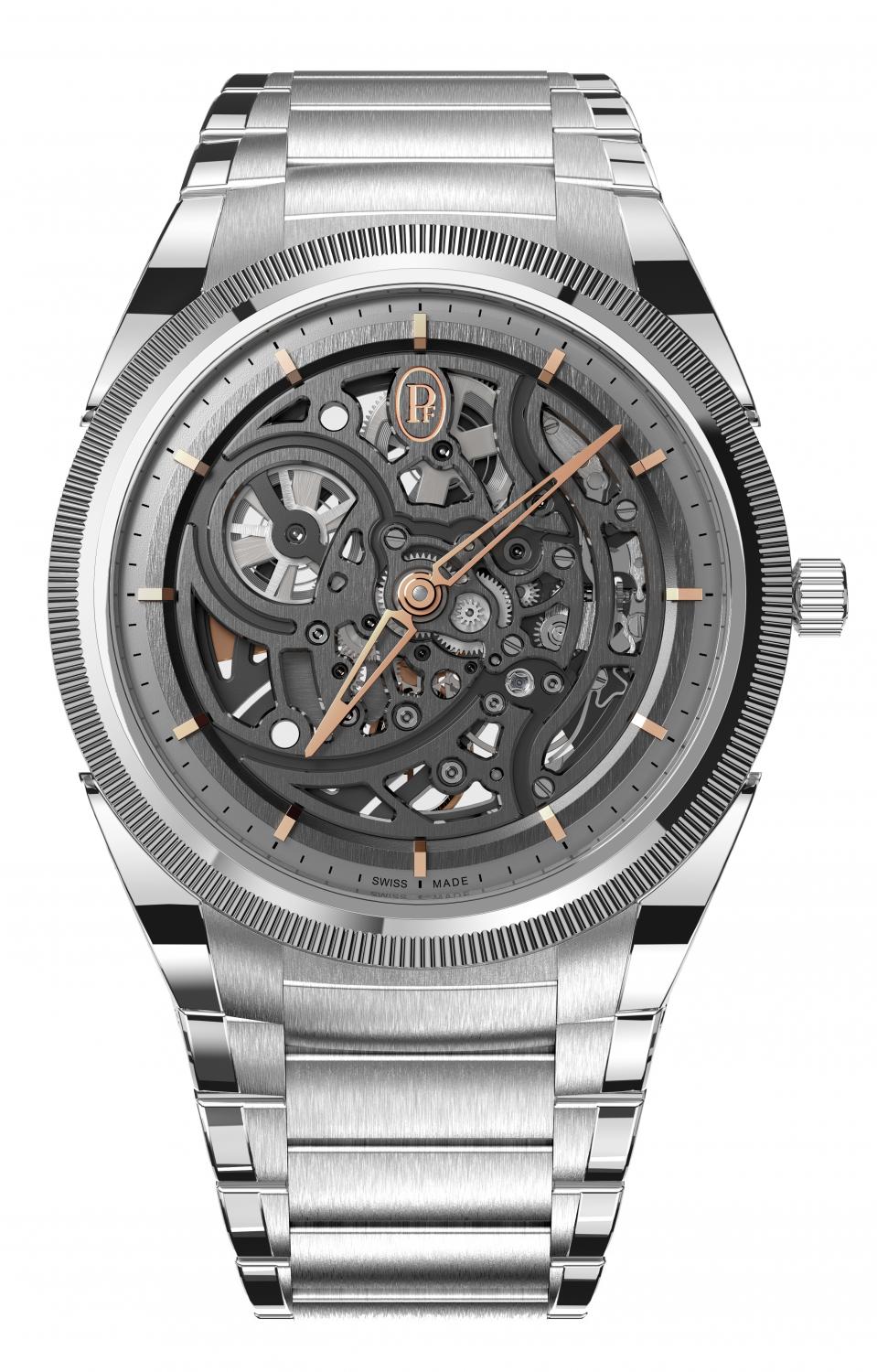 Stainless steel version of the Tonda PF Skeleton with the knurled bezel in platinum 950.

"We took out everything not needed even the GMT when you don't need it, and when you need it, it appears," he said. "The Tonda PF GMT Rattrapante looks like a very plain watch, and you will further discover the subtle details when wearing it."

Elaborate details are also revealed in the pared-down 40mm Tonda PF Skeleton in rose gold or steel/platinum, whose graphite-coloured openworked dial has a chapter ring and suspended hour markers.

Skeletonisation generally opens up the movement as much as possible. Parmigiani Fleurier takes a different approach by executing the artistic openwork to reveal the organic life of the movement and its architecture while preserving its balance and volume.

Artisans used voids to allow light to pour into the very heart of the movement, and the meticulously hand-chamfered latticework draws the eye to its mysterious kinematics. The wearer's movements further help wind the openworked barrel, which displays the steady contracting and relaxing of the mainspring driving its balance.

"In just a few months since its launch last year, the Tonda PF exceeded our expectations, and is affirming itself as a statement of unostentatious haute horlogerie, while the Tonda PF Skeleton is an expression of mechanical purity," he said. 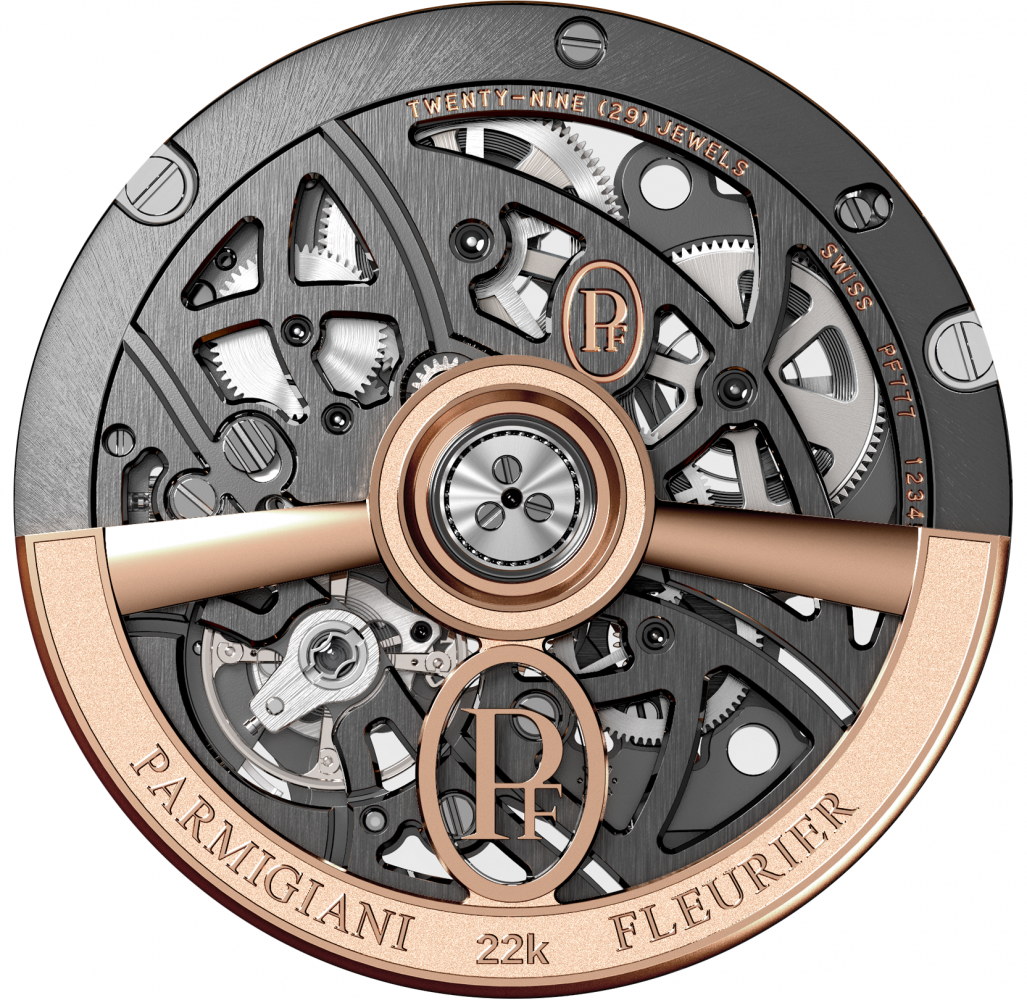