A Sa Kaeo mother is appealing for justice after an old man in their village stabbed her son, mistaking him for his elder brother with whom he had argued earlier.

Montree "Ton" Changwad, 26, from Khao Chakan district, died after Lin Pawong stabbed him fatally outside his mother's home on Sept 21.

The victim's elder brother, Polwat "Pol" Changwad, 31, said he argued with Mr Lin earlier that evening as he was hunting for frogs close to Mr Lin's place, about 150m from his own.

Mr Lin turned up at his family home shortly after, evidently bent on reprisal, but mistook his younger brother for himself, and stabbed him.

"When he saw me out hunting for frogs the old man cursed me and told me to go elsewhere. I responded saying I was on public property and can hunt for frogs where I like," Mr Pol told reporters.

The response angered Mr Lin. "He turned up at my mother's place shortly after when he ran into my younger brother Ton, who had just turned up on his motorcycle. In the darkness he mistook Ton for me and stabbed him."

News reports said Ton, who had not spoken to Mr Lin before, did not have a chance to defend himself. Nor did he know about his elder brother's argument with Mr Lin.

The two brothers look alike and can be hard to tell apart in the dark. "He took karma on my behalf, an innocent victim," Mr Pol said, referring to Ton.

After the argument, Mr Pol returned to the house briefly to attend to his fishing gear, before leaving home again. "I had gone just 100m when I heard my brother call out for help.

"I ran to help, and saw the old guy lunging at him with the knife. Ton was holding on to his stomach, as his insides were coming out.

"I punched the old man, who had parked his vehicle across the driveway to stop others from leaving. He was determined to inflict harm," he said.

In time-honoured fashion, Mr Lin fled the scene after his crime, though he later handed himself in to police, admitting he had stabbed Ton but insisting he acted in self-defence. He handed over the pocket knife he used. Police took a record of what happened and released him without charge.

Ton's mother, Duay Purachathammo, 50, took her injured son to the district hospital. He was transferred to Somdet Phra Yuparat Sa Kaeo owing to his serious condition, but died about 4am.

Ms Duay visited Khao Chakan police the next day to alert them, and they called in Mr Lin to face charges.

Ms Duay said police should never have let him go in the first place, as he could have come back to attack Mr Pol after realising he stabbed the wrong man. She complained to a justice ministry clinic at the Sa Kaeo district office, and to the police themselves.

Ton's mother said she was also unhappy with Mr Lin's family, who had offered compensation for her son's death of just 100 baht, plus 10 pomelo fruit. "Is this really how much my son's life was worth?" she asked. She was forced to borrow 60,000 baht to pay for his funeral costs.

Deputy head of investigations at Khao Chakan police, Pol Lt Col Udom Intharaprasert, said Mr Lin was charged with killing with intent, and officers were preparing to send the file to court. "The family can rest easy," he said.

An Udon Thani woman lost patience with her philandering husband after not seeing him for more than 12 months and finding out he had shacked up at his second wife's place. 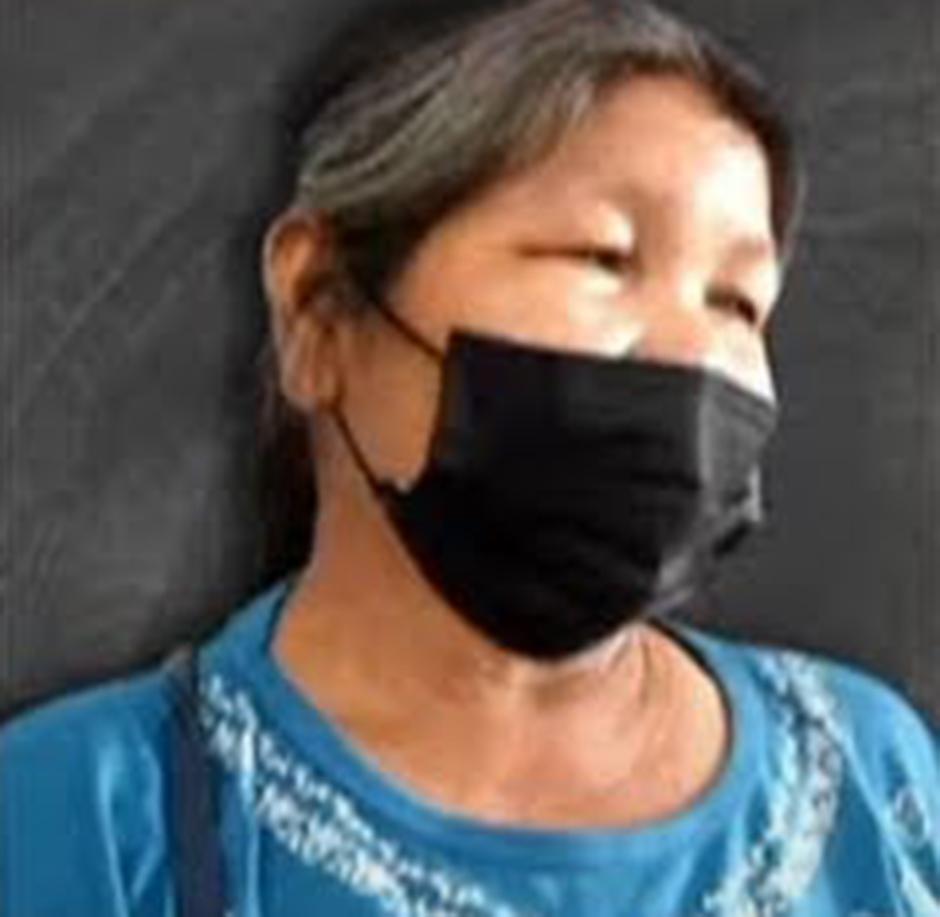 Penchan "Tui" Chaisit, 61, says she stabbed her husband's informal wife Wilai "Nang" Timinkul, 53, in self-defence after the victim hit her with a piece of wood. Wilai was to die later from her injuries. The stabbing took place outside Wilai's home in Non Sa-At district on Sept 23.

Ms Penchan said she had been married to Thongbai Chaisit, 63, a labourer, for 40 years and the couple have three children. However, nine years ago he started seeing Wilai, who lived in the same village.

"At first he would come home, but then stopped. I found out later he had a minor wife and was living with her openly. If he did come home he would get drunk and abuse me, though he never hit me. I finally learned to let it all go," she told reporters.

Ms Penchan moved alone to a simple farm hut where she tends animals and supports herself. Despite her husband's transgressions, she did not divorce him, though if she ran into his second wife the pair would often argue, family members say.

A year ago, Mr Thongbai took up work in central Udon Thani. He was joined by other men in the village, but when the work ended last week and they returned home, Mr Thongbai was not among them.

"When I called, he claimed his vehicle was broken and could not get home. However, when I went over to the minor wife's place, I saw his pickup there," Ms Penchan said.

"I called him, but he refused to come out. His second wife started abusing me, and turned up at the front of the house when she started beating me with a piece of wood. I reached for a fruit knife in my bag and stabbed her once in the chest," she said.

The victim was making a meal for Mr Thongbai, her younger brother Athit Sonnarong, 50, and Wilai's two children when Ms Penchan arrived about 7pm.

Mr Athit said when the argument broke out he paid no attention, as the two wives often bickered. After being stabbed his elder sister called for help, and he and Mr Thongbai took her to the district hospital.

"I knew they had problems but didn't expect it would go this far. I had told my sister to do things correctly, but she didn't listen.

"I said Penchan and her husband were still married and they should quit properly first before she carries on," he told reporters. Wilai and her own husband had parted many years ago.

When Wilai fell to the ground, Ms Penchan took off on her motorcycle. She dumped the knife in front of a coin-operated petrol refill booth before heading home, about 2km away. 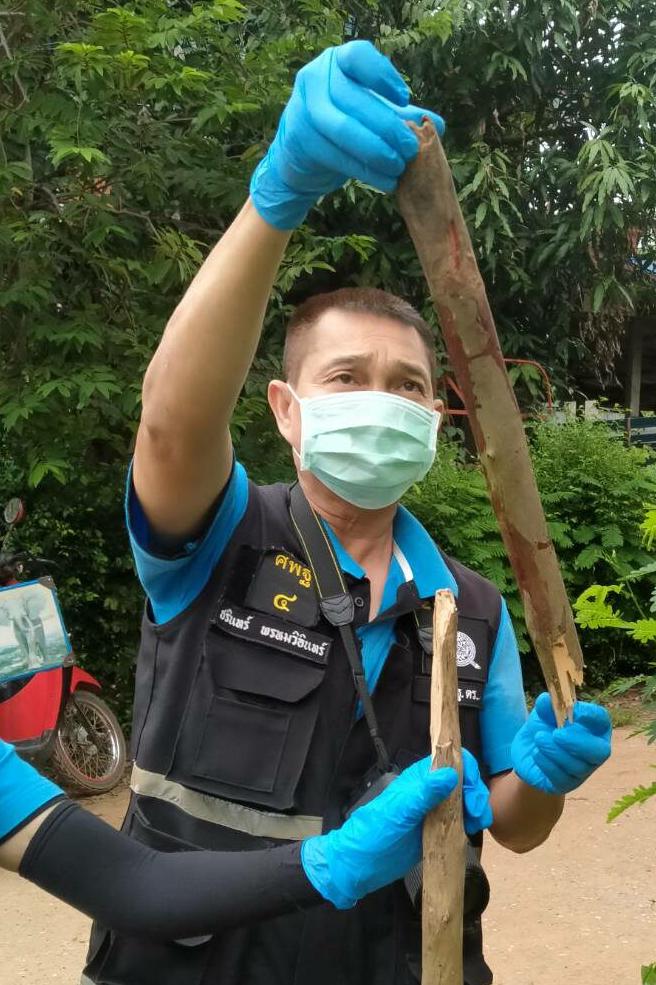 The victim hit Ms Penchan with this stick.

About 10pm, Ms Penchan visited district police to complain Wilai had attacked her, and went to hospital for a checkup. She was not aware that the injuries she inflicted on Wilai were potentially fatal.

Wilai was later transferred to Udon Thani hospital, but died at 11pm. After hearing the victim had died, police called Ms Penchan, asking her to surrender. She was charged with murder with intent.

A Trat woman who shot her husband after she discovered he was seeing someone else initially claimed he was ambushed on a rubber plantation. 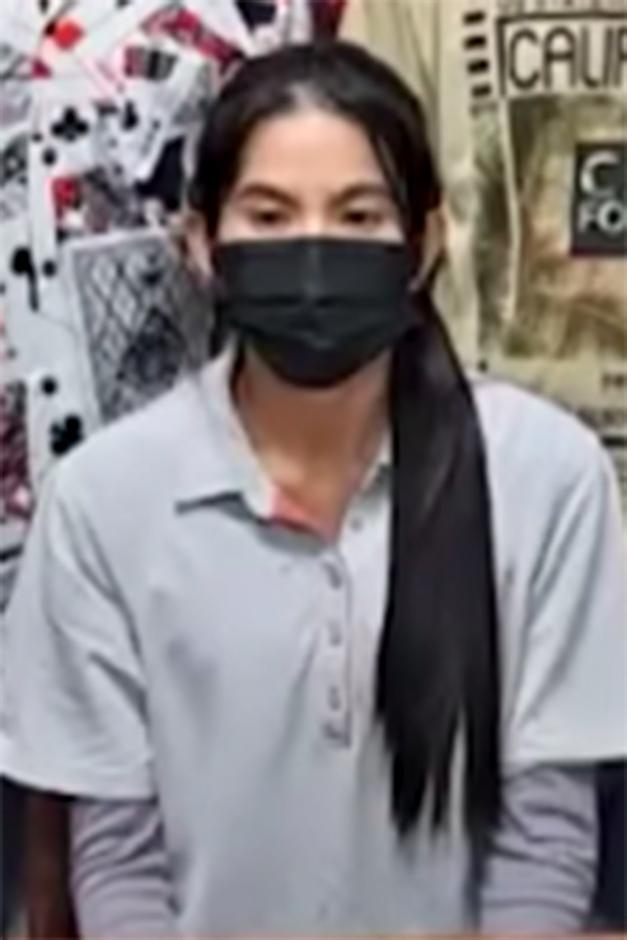 She initially told Muang police that he had been ambushed and shot at a rubber plantation about 1km from their home in Tha Kum sub-district. He had turned up injured at their place in his saleng seeking help, she claimed.

Police liaised with local officers who inspected the plantation. However, they found no signs of a struggle and no signs of blood in the saleng.

In any event, they doubted Mr Supawit would have the strength to get home unaided, and suspected he might have been shot there instead.

At his house, police met the injured man's father, Chid Kraiwan, 70. While it is unclear what he told them, police stepped up their questioning of Ms Siriwan, who confessed she had shot her husband in the chest with an unlicensed, Thai-modified .38 calibre handgun.

She discovered he had been seeing someone else and the two argued fiercely. He started to hit her and she shot him to defend herself, she said.

Family members said they had no idea where she obtained the gun. Police charged her with attempted murder. Her husband is in Trat hospital recovering.