The Japanese concept of omakase has in recent years taken Bangkok's food scene by storm. 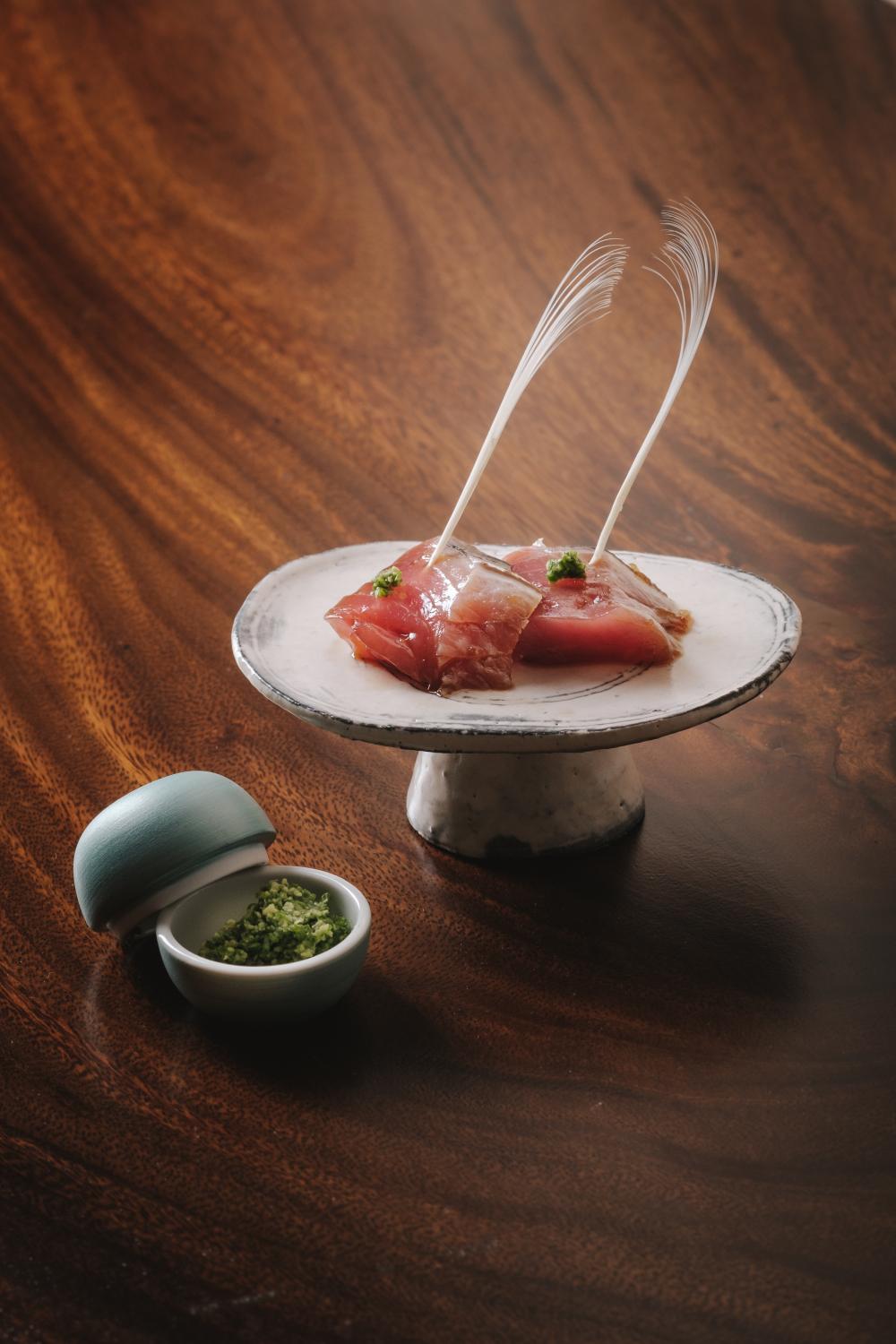 Evolving entirely around imported ingredients, the boom of upscale sushi omakase restaurants in the city may be seen as an indication of wealth.

Omakase diners know the menu always comes as a surprise, but they are willing to spend anything from middle four digits to five digits per person.

And despite the high price tag, these premium sushi houses never lack customers on waiting lists.

At Sushi Saryu, pronounced "sah-rew", which humbly opened in July in an exquisite office building on Sathon, guests are recommended to reserve their seats at least a month in advance.

The restaurant is set in an intimate, almost hidden, all-white chamber and only seats six diners at a time.

Single-handly driving the kitchen is chef Seiji Sudo, a Kyushu native who worked at a number of renowned sushi restaurants in Tokyo, Singapore and Thailand.

Chef Seiji is no stranger to sushi connoisseurs in Bangkok. In fact, while working at Tama Sushi, his last post in Sukhumvit, he congregated a group of culinary followers, many of them A-listers. 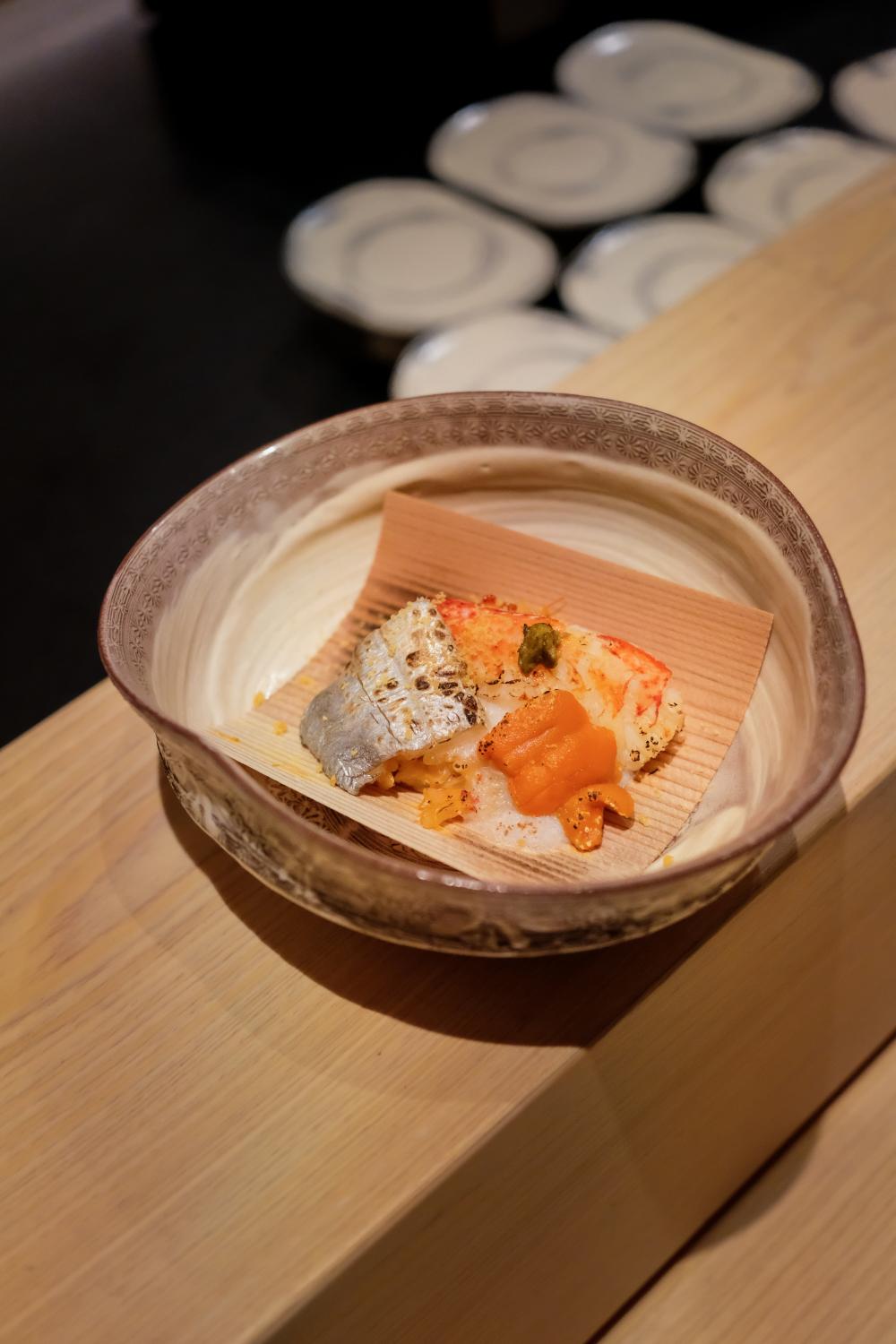 A meal at Sushi Saryu, which I visited a couple of weeks ago, costs 8,000 baht per head.

It encompasses 15 savoury items -- some ample dishes, some in chock-full bite sizes -- plus a dessert.

The seafood here comes from Toyosu market, a new wholesale fish market in Tokyo and the largest and most modern of its kind in the world.

But on top of the excellent ingredients is chef Seiji's attentiveness to detail, whether it be the food preparation, presentation and temperature, the dining ware or the background music.

The evening began with a complimentary cup of sake. Sushi Saryu boasts an exclusive selection of champion-grade sakes with prices ranging from 4,000-47,000 baht per bottle. 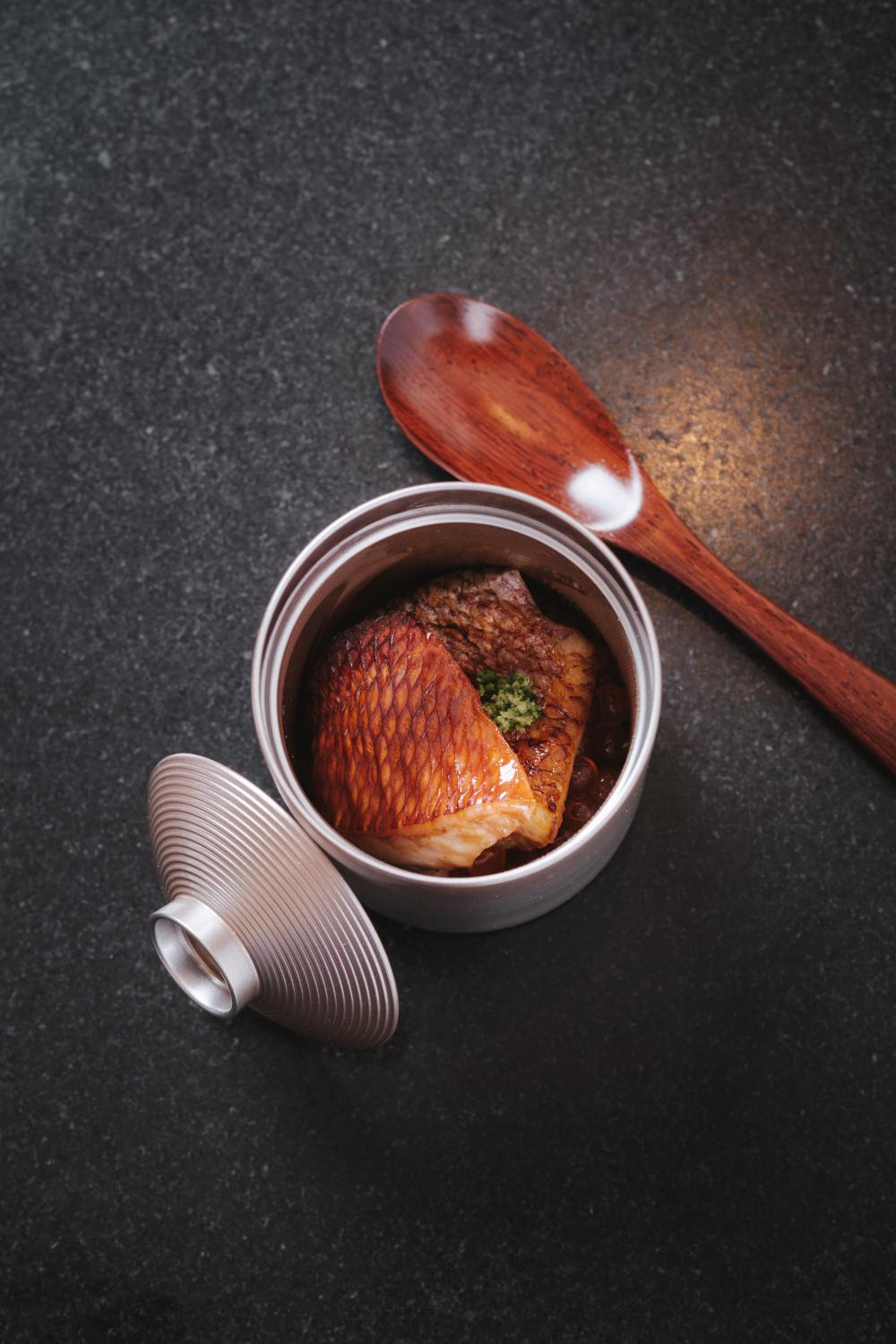 The warm rice with charcoal-grilled blackthroat seaperch and sujiko roe.

Chutoro aburi, a sumptuously large and fatty slab of tuna flash-seared on one side, came blanketing a small helping of sushi rice on a nori seaweed sheet to represent the first course.

It's a simple marriage of flavourful and delicate fish and perfectly-seasoned sushi rice that results in true tastebud ecstasy.

That night was my first time enjoying sea urchin roe as a soup, and it proved a delightful treat. Three bright scoops of super sweet and buttery Murasaki uni came in a warm consomme seasoned with just salt and fresh wasabi.

For those lusting after Japanese snow crab, the following dish will transmit you straight to culinary cloud nine.

It's a medley of creamy crab tomalley, nutty crumbly crab roe and cooked snow crab meat pulled from grilled crab legs and drenched with a sauce made from its stock.

The three following dishes, which were delicious and memorable, were mackerel pike sushi; a plump and sweet botan shrimp with green roe accompanied by bafun uni and salmon roe; and sushi topped with extraordinarily springy akagai clam.

At the halfway point of the dinner was a winter delicacy, the firm and springy meat of fresh kawahagi, an indigenous cold-water fish of the western Pacific, served on sushi rice with a small salty sweet wedge of its liver.

As if he knew we could never have enough fish liver, chef Seiji spoiled us again in the next course with ankimo. A hefty, terrine-like chunk of monkfish liver, cooked in a sweet and slightly spicy sauce, offered some of the most buttery and silky mouthfeel, hence the nickname "foie-gras of the sea".

The chef's rendering of yakisushi was a mixture of rice, hairy crab meat and uni baked on a Japanese pine bark to absorb a pine aroma before being topped with creamy cod milt, aged mullet roe and flamed-grilled filet of beltfish.

Sushi Saryu is one of the very few places in Bangkok to offer sake-steamed Chiba black abalone with a mallard green creamy dressing made from the abalone liver.

Although almost all of the dishes on the menu are offered according to seasonal availability, I'm sure you will always find or be able to request chef Seiji's signature katsuo.

It features bright-red sashimi fillets of skipjack tuna that have been meticulously cured in housemade soy sauce. This full-flavoured delicacy proves to live up to the acclaim.

If you are a woman, by the time the 13th course is served you'd be more than full. I wish I could take home the warm rice dish topped with charcoal-grilled fillets of blackthroat seaperch and super sweet and soft sujiko (bright red salmon roe).

A sushi soup featuring piping hot broth, in which bathed kinmedai and puffed rice, and a nodoguro sushi spoke for the last two dishes before dessert.

Of course, the coconut pudding with candied chestnut and green tea sauce wrapped up our night brilliantly.

Special dietary requirements such as food allergy can always be discussed upon booking your seat. The service staff speaks Thai, English and Japanese. 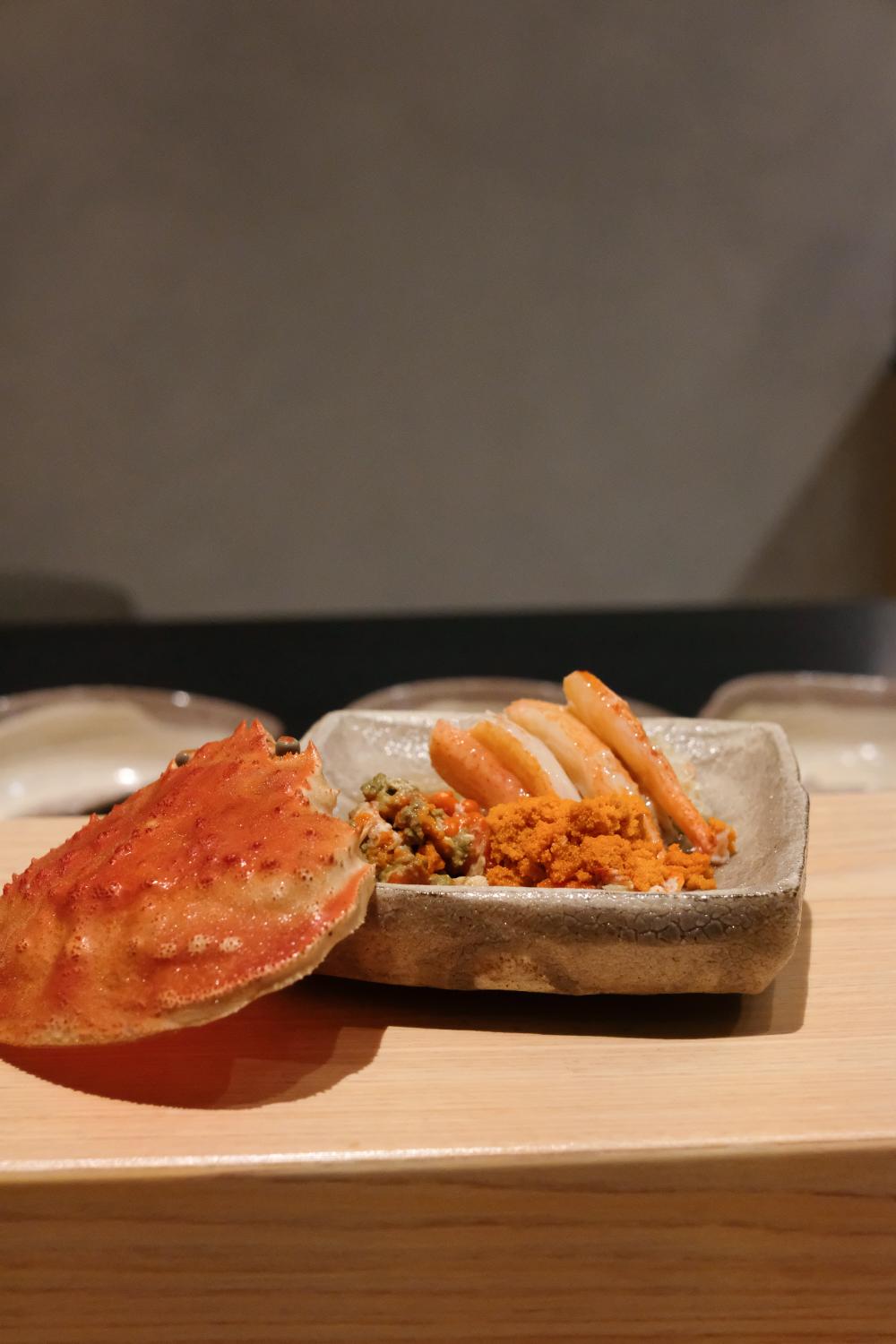 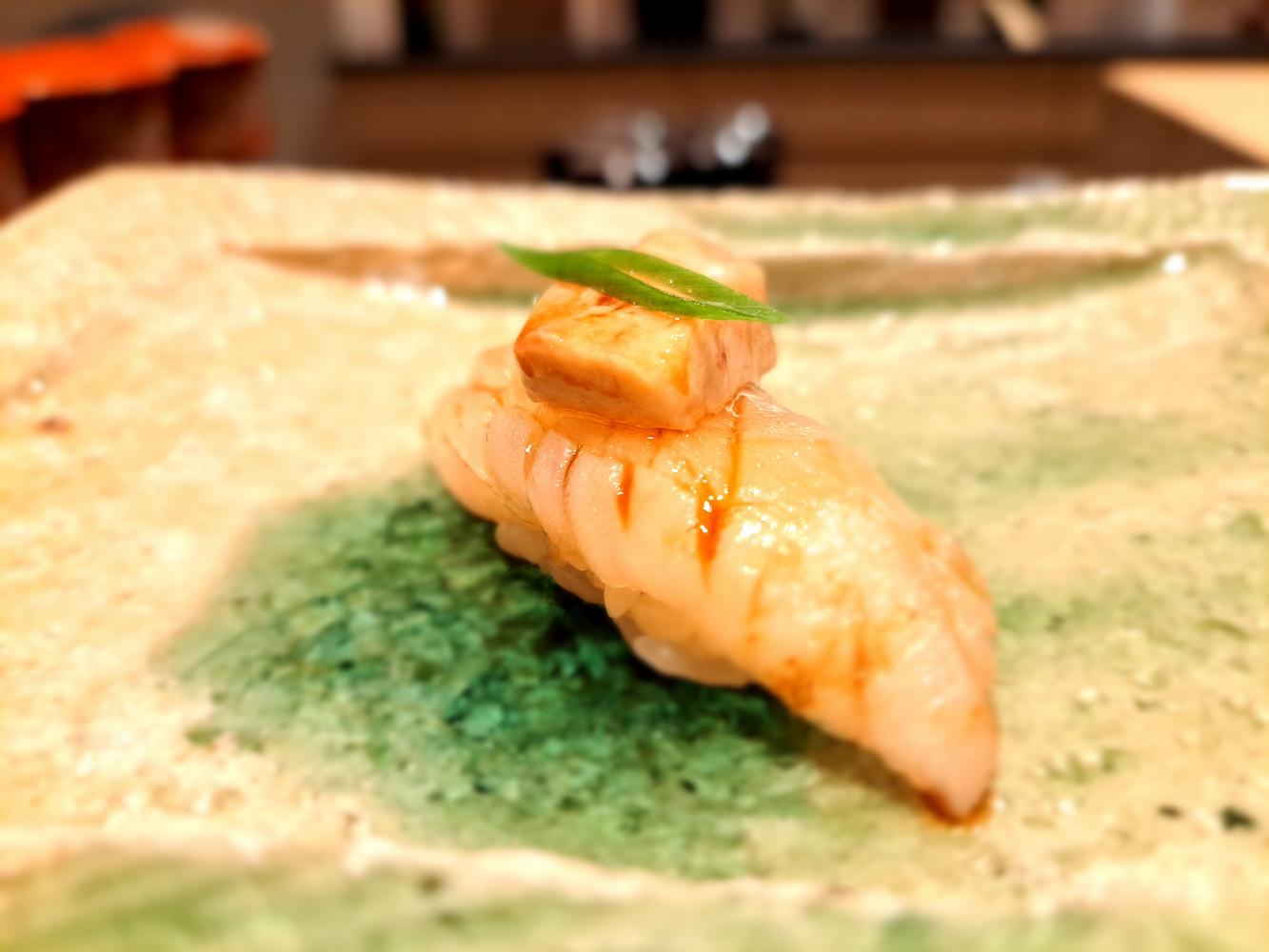 The thread-sail filefish sushi topped with a wedge of its liver.