Thara Thong, the Thai restaurant of the Royal Orchid Sheraton Hotel & Towers, is back in full swing offering a royal Thai dining experience.

Dining at the riverside restaurant is much like in a gorgeous wood Thai pavilion, with an interior design filled with teakwood and ornate decoration that emphasises the ‘Thai’ effect. Thara Thong has pulled off sunken seating, generally found in Japanese restaurants, by befitting it with the iconic Thai triangle cushions and cushioned seats. Even though the restaurant is on the 1st floor of the hotel, it overlooks the river of kings aka the Chao Phraya and you can catch the cool breeze and river vibes with the patio seating. 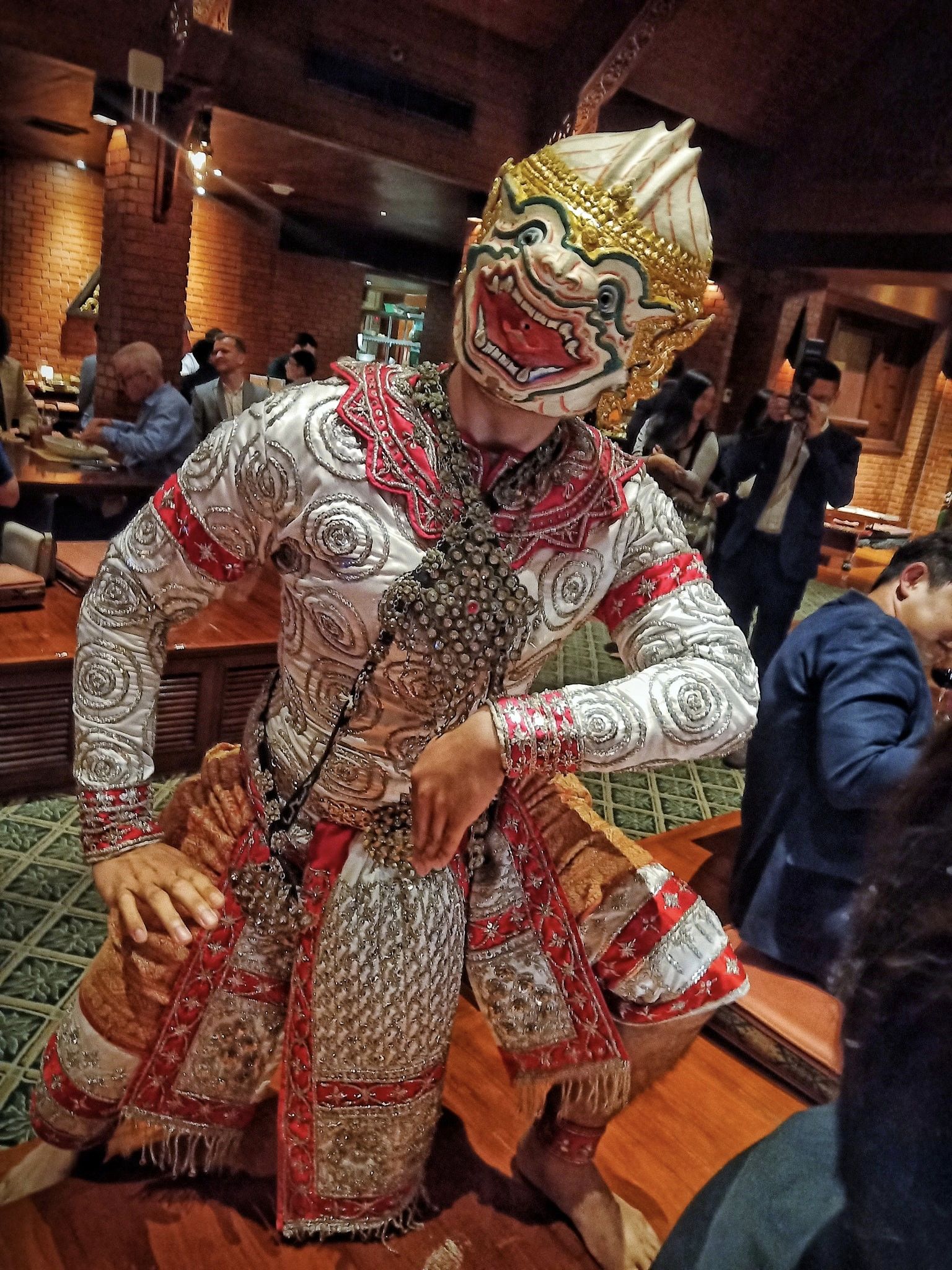 Dinners can enjoy a series of traditional Thai dance performances that take inspiration from each region of Thailand, starting at 7pm. Plus, live Thai instrumental music will be playing all night to boost the ambience. Here, regional dishes are made using traditional recipes that have been adjusted to today’s tastes. Along with traditional favourites, executive chef Tomas Keskitalo has added five twisted Thai dishes to the menu, reflecting his fresh take on modern Thai cuisine. 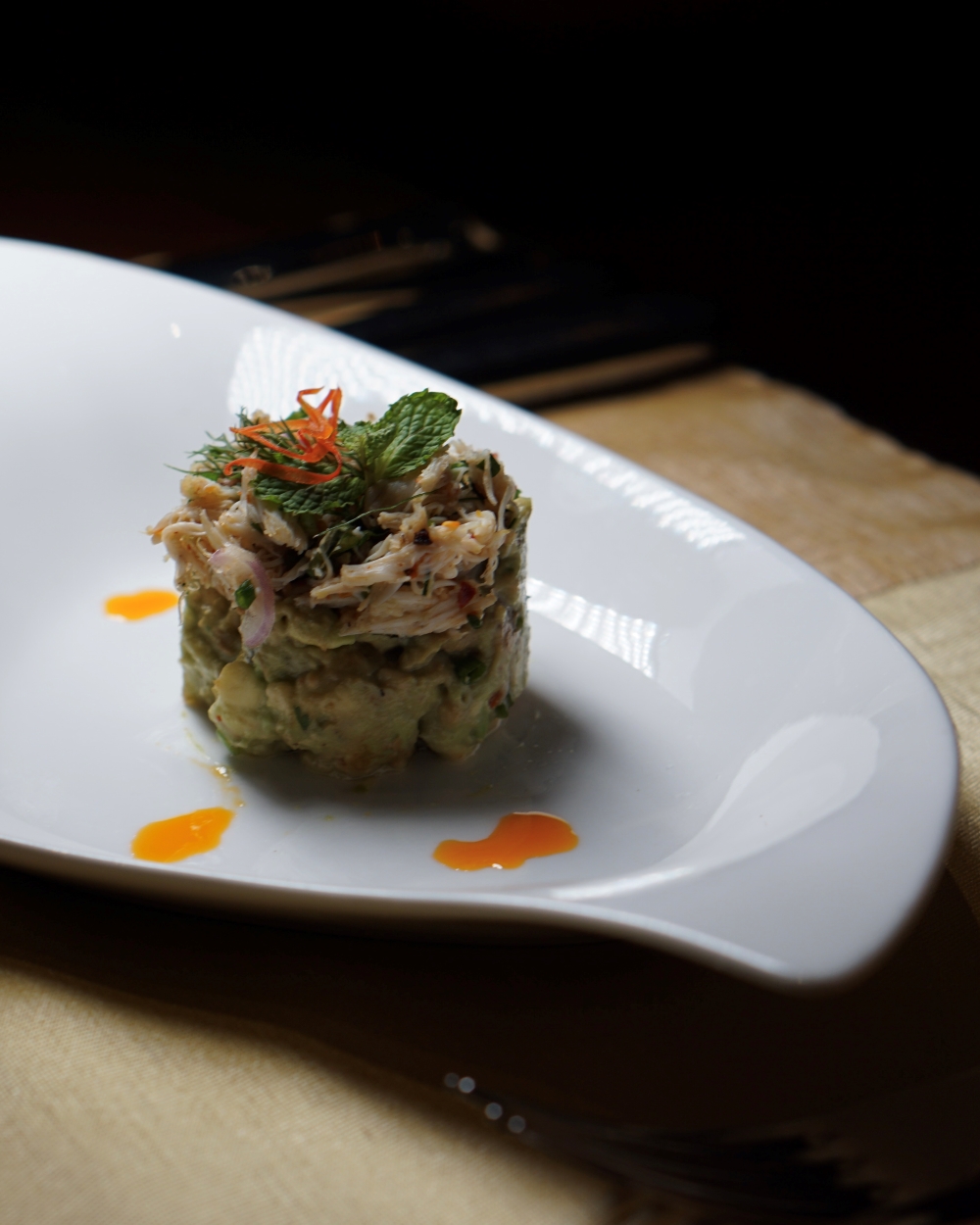 ‘Larb nua poo’ avocado depicts a trace of Mexican influence as it is served with guacamole. ‘Larb’ is traditionally made with minced pork or chicken, but at Thara Tong, the spicy salad is served with crab meat. The seafood ‘larb’ is on point in seasoning for a herby taste and aroma with a mild spiciness. 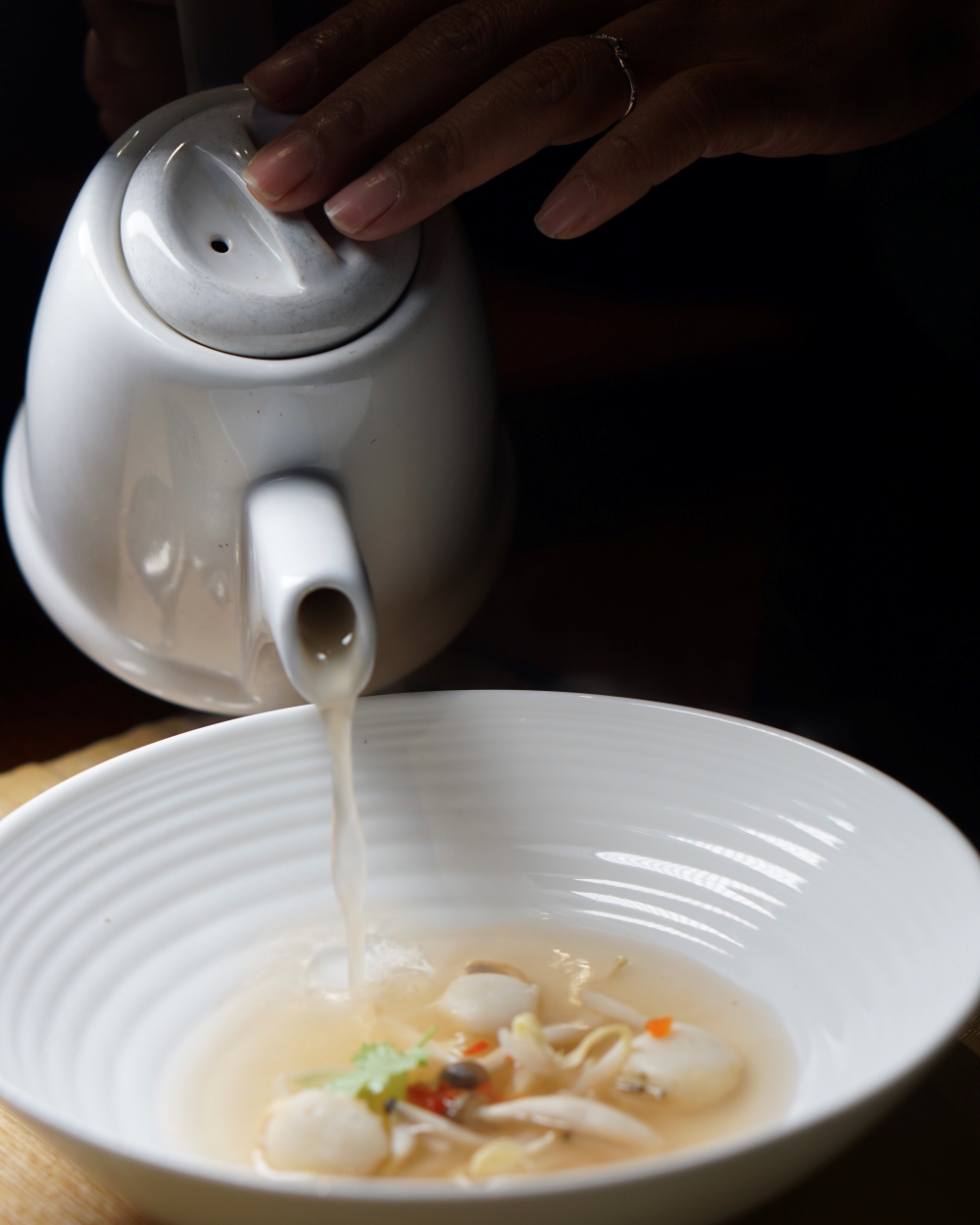 The fragrance of ‘Tom yam’ tickled my nose when the waiter poured the broth from a teapot into a bowl of ‘Tom yam hoi’ shell. You will surprisingly find that here the taste of ‘tom yam’ comes from shimeji mushrooms, which have been pickled with ‘tom yam’ paste. A couple of scallops swim in the aromatic clear broth alongside pickled mushrooms and bean sprouts. Ever eaten ‘tom yum’ with bean sprouts? Neither have we, and the dish gives serious noodle soup vibes. 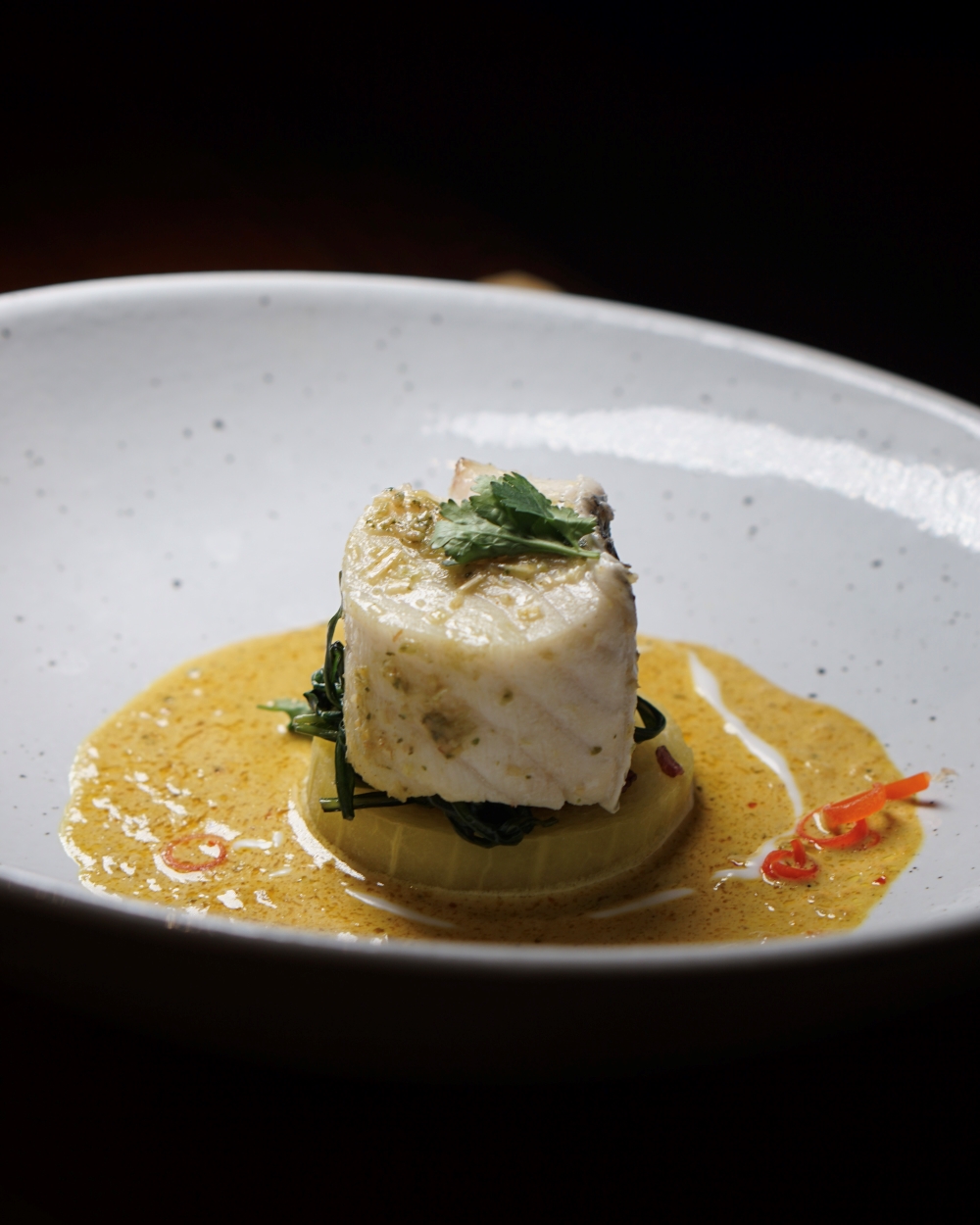 ‘Pla nueng samunprai’ is nothing but aromatic. A chunky fillet of snow fish is steamed with a melange of local herbs until soft. It is placed on top of winter melon, sautéed morning glory and organic riceberry, which are all neatly layered in a stack. Surrounding the savoury island is the southern yellow curry that gives you another herby, aromatic punch. 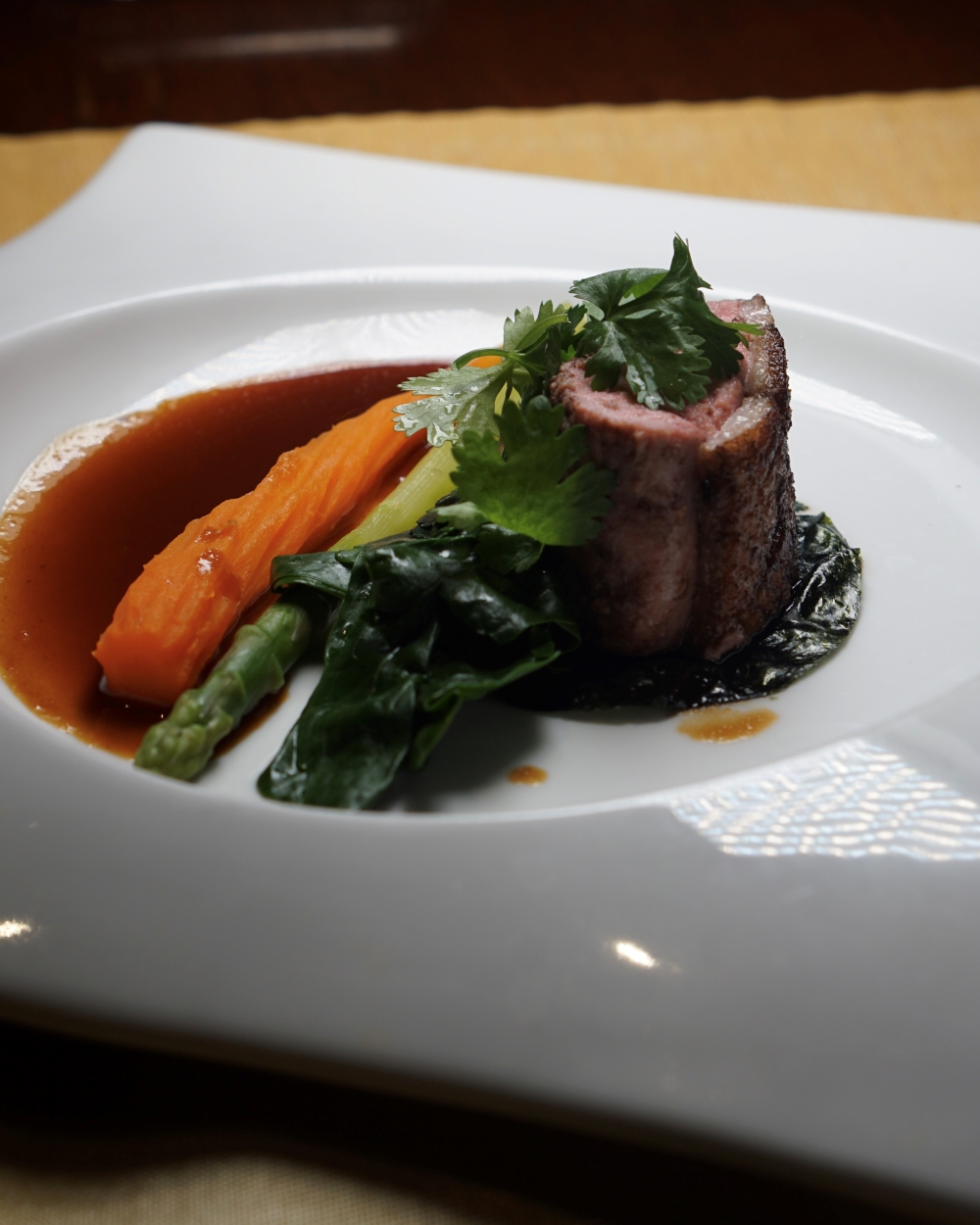 Hot-cooked rice is a perfect partner for the ‘Ped yang sauce makham’. Organic duck breast is sous vided before being char-grilled with five spices and hoisin sauce to keep the meat juicy and tender. It is served with steamed veggies and a sweet and sour tamarind sauce that also gives off a whiff of lemongrass. The secret tang of this dish is a slice of roasted seaweed that adds a unique saltiness. 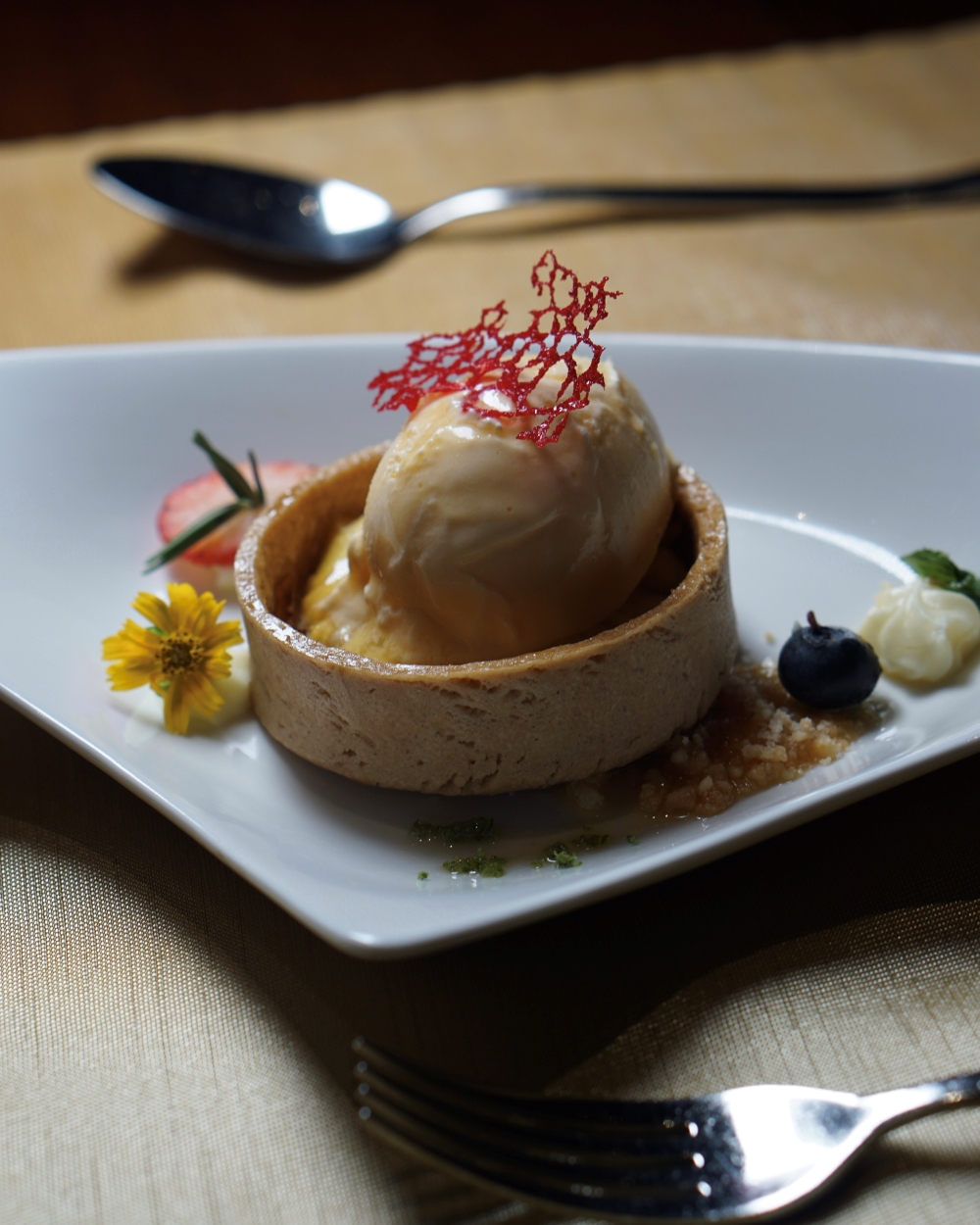 Cleanse your palate with 'Tart mamuang’, where slices of ripe mango are tucked inside a crunchy tart shell. The pastry having been coated in honey, it is served with a scoop of vanilla ice cream. Fresh blueberries and strawberries are on the plate for garnishing, along with lime zest and crumble.