A Chumphon man shot his ex-wife's new love in the groin, forcing the removal of his genitals, but claims it was an accident.

Police nabbed Boonterm Ounkaew, 37, in Muang district following the Nov 10 shooting at a neighbour's place occupied by his ex-wife and her new partner, a Lao man called Somchai.

Mr Boonterm said he had been drinking with his partner at their rowhouse when he took out the gun which he kept on a clothes shelf.

He decided to store the unlicensed short-barreled shotgun, which he had bought from a friend the year before, in his vehicle outside. However, he stopped at Somchai's place first to show him the gun when his finger "accidentally" squeezed the trigger. A single shot entered Somchai's groin.

He cried out in pain, and Mr Boonterm, who says he was startled by the blast, fled back to his place. He replaced the weapon under the shelf. Soon after, police knocked on his door. They retrieved the weapon, which had another round in the chamber.

Somchai was taken to hospital, where doctors performed surgery. They say injuries were such that they had to remove his genitals. 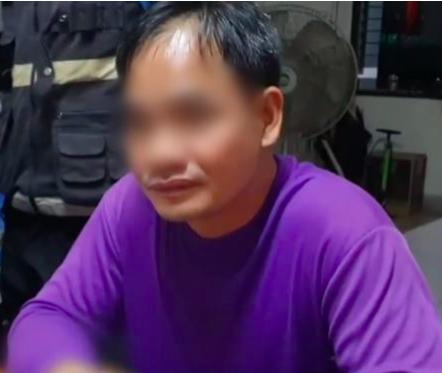 The loss to his manlihood left Somchai in a state of dismay, says his partner, Ubolrat Wangkhiri, 32, Mr Boonterm's ex-wife.

She and Mr Boonterm have two children together and are still on good terms, according to neighbours, though police do not believe his claims that it was an accident. They charged Mr Boonterm with attempted murder and firearms offences.

Both families, with the exception of Mr Somchai, are from the northeastern province of Loei. They moved to Chumphon along with about 30 relatives some years ago to sell government lottery tickets.

They live in the same block of 35 rowhouses. Mr Somchai also sells the lottery, but has been with them for "just two or three draws", Mr Boonterm said.

Ms Ubonrat said she and Somchai have a daughter, aged six months, though relatives look after her in Loei. She said her ex-husband Mr Boonterm initially caused no problems, despite living nearby, but after he started seeing a new partner of his own started growing jealous, especially when she was with Somchai.

On the day of the shooting she was outside their place when Mr Boonterm turned up with the gun and asked gruffly, "Where is he?" He marched into her place and shot Somchai. After he left, Ubonrat quickly closed the door, as she feared she would next.

Somchai was too crestfallen to talk to anyone about what happened, she said. "I am deeply shocked, but for now just ask that he pulls through. Nothing else is as important as family," she said. 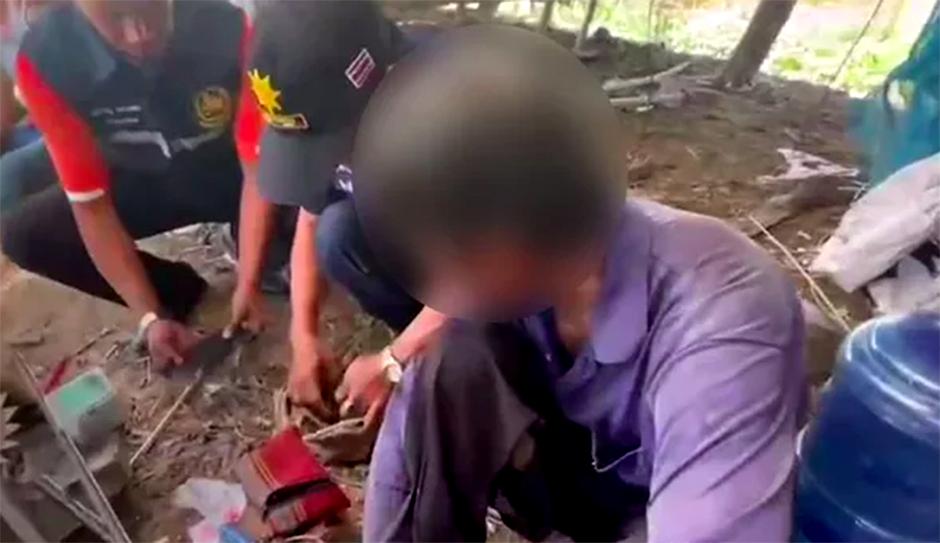 Buasawan with his drugs stash.

A middle-aged man in Maha Sarakham grumbled that his drug supplier had sold him counterfeit pills, as they failed to have any effect.

A SWAT team from the Department Of Provincial Administration caught the man, Buasawan, 55, as part of a drug sweep in the province.

They found him in a hut in Borabue district where he admitted he had been taking speed pills for days and had gone into debt with an underground lender to pay for his habit.

Buasawan said he had no income of his own so was forced to turn to the lender for help. He asked to borrow 4,000 baht but the lender gave him just 1,000 baht, which after expenses were deducted came to just 700 baht. Buasawan said he spent 500 baht on 10 speed pills, but found they had no effect.

"I even took nine pills in one go and still felt nothing, though I slept well that night," he told the SWAT team.

A urine test found he was positive for drugs. Police told him the pills were not counterfeit after all, but possibly mixed with something else.

Buasawan identified his supplier as Kamsai, 60, who sells drugs from a hut at the edge of a farm field to the west of the village. Police walked in about 80m to find the hut, and spied at its owner through binoculars. They saw Kamsai in the hut, sitting over a small stove taking drugs.

Police caught him. A search of the hut yielded two Thai-modified guns, along with 30 pills.

Kamsai, who gave police the name of his own supplier, said he bought the drugs for 50 baht a piece and sold them for 60 baht-100 baht. Police charged the pair with drugs and firearms offences and are now hunting for Kamsai's supplier. 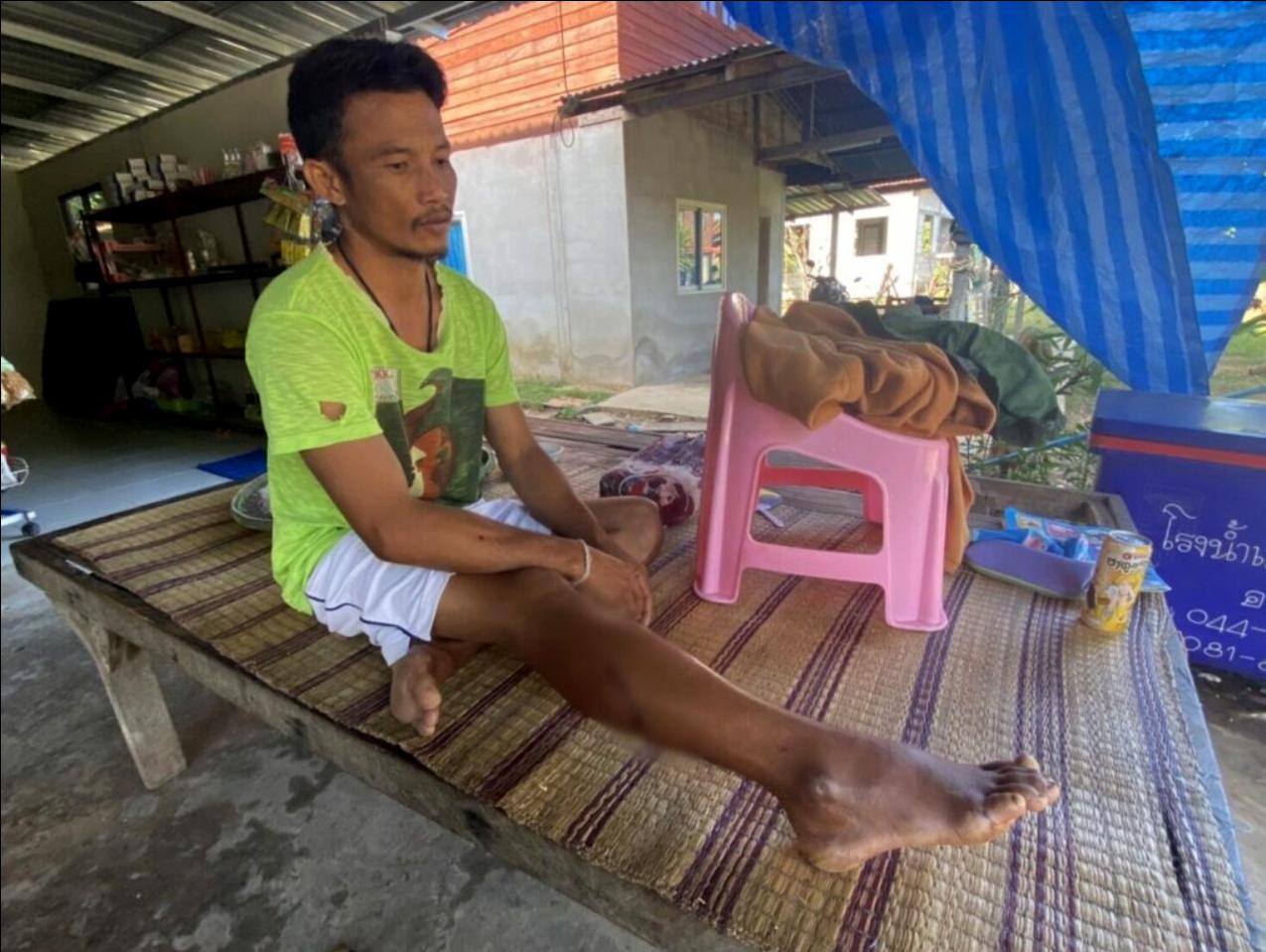 It started with the torch

A Buri Ram man says a druggie attacked him with an axe as they were out fishing.

Boonrod Phetkla, 40, was hit in the nape of his neck and his leg late last month on a farm field in Khaen Dong district. His assailant, Somrot Chantaummao, 48, was also out fishing that night and wearing a torch strapped to his head to aid visibility.

Mr Boonrod said when they encountered each other, Mr Somrot shone the light in his eyes, annoying him. "I asked why are you shining the light in my eyes?" he told police.

Mr Somrot, he said, walked away without saying anything, but then attacked him when his back was turned. Mr Boonrod said he turned away and shortly after felt a blow to the back of his neck.

As he fell to the ground, he watched as Mr Somrot struck him in the leg several times with the axe, which left deep wounds.

Surprisingly, Mr Somrot offered his victim some basic first aid. He wrapped the victim's shirt around his leg and told him to go home.

Mr Boonrod went to the local hospital where he needed 16 stitches for the leg wound. He has complained to police about Mr Somrot, who admitted hitting him, but insisted he did it in self-defence.

He claims Mr Boonrod trespassed on his farm, so he shone the light in his eyes. They started to argue and came to blows, he claimed, while admitting he had taken a speed pill earlier that day.

Mr Boonrod, who is unhappy about progress in the case, says police have yet to call him in to talk to Mr Somrot, and his assailant has yet to offer an apology. Police insist they charged the suspect with assault and drugs offences. 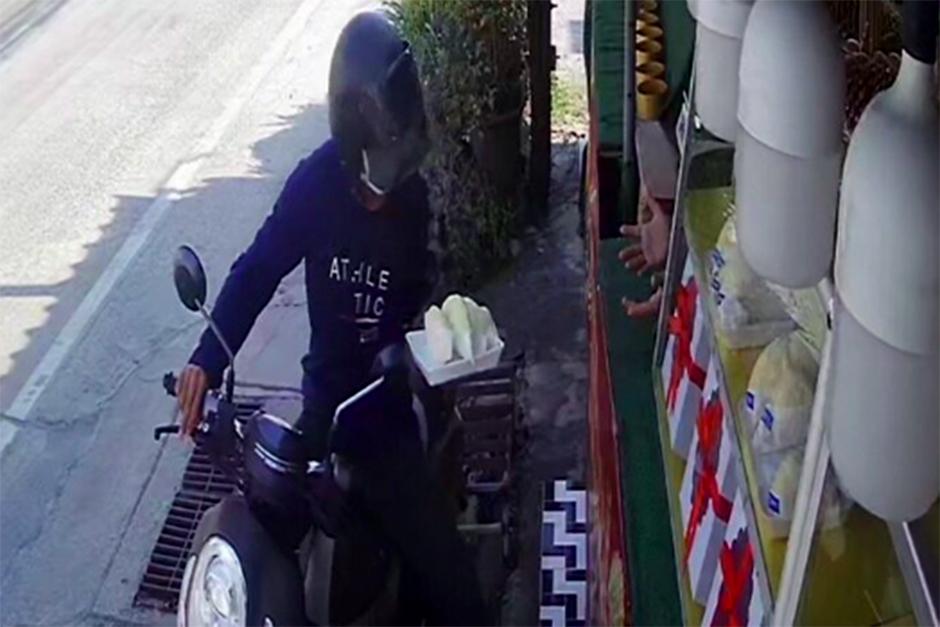 A Chon Buri man who fled a dentist's clinic before paying the bill earlier stole a high-priced durian from a local trader.

Don Hua Lor police in Muang district say a CCTV camera caught the man stealing an out-of-season monthong durian from a roadside trader after making out he was an interested customer. When the trader's back was turned, he swiped it from her stall and sped off on his motorbike.

Later, the trader said she saw a news item in which she recognised the man who stole her durian. Some hours after stealing from her, he went to a local dentist to get a tooth filled, and fled before paying the bill.

"He claimed he had forgotten his wallet under the seat of his motorcycle, and asked to go and get it. However, he sped away," Pakploen Peelatri, 34, an assistant to the dentist, told reporters. The young man gave the name of Det-Udom Chomchuen, 26.

The dentist's clinic was nearby a local gold shop, where a CCTV camera took his image.

Station head Pol Col Kritchawin Veerajit said police located the rental place where the suspect had been staying, but when they got there found just a pile of durian seeds. The thief had cleared out.

"A neighbour said the lad comes from Buri Ram and lost his job," he said. "The owner of the durian shop did not lay a formal complaint, so we can't get him on that, but we can get him on the dental clinic theft," he added. He attributed the thievery to the state of the economy, and the man's own hunger.

Referring to the durian theft, he said: "If he is hungry he can always try asking nicely, or ask the police instead," he said. Police are looking for him.