Igniv Bangkok is one of a few restaurants you’d go for the delicious sharing menu, but more to covet the tableware it is served on. Adding to the deliciousness is the visit of founding chef Andreas Caminada. For the first time since the restaurant opened, chef Caminada will be serving a surprise dish for lunch and dinner on Nov 26 and 27.

During chef Caminada’s visit to the first Igniv outside of Switzerland, diners will get to meet the chef in person, as well as head chef David Hartwig and pastry chef Arne Riehn. The four-course lunch and dinner, with the surprise dish from chef Caminada costs B6,900++ per person. 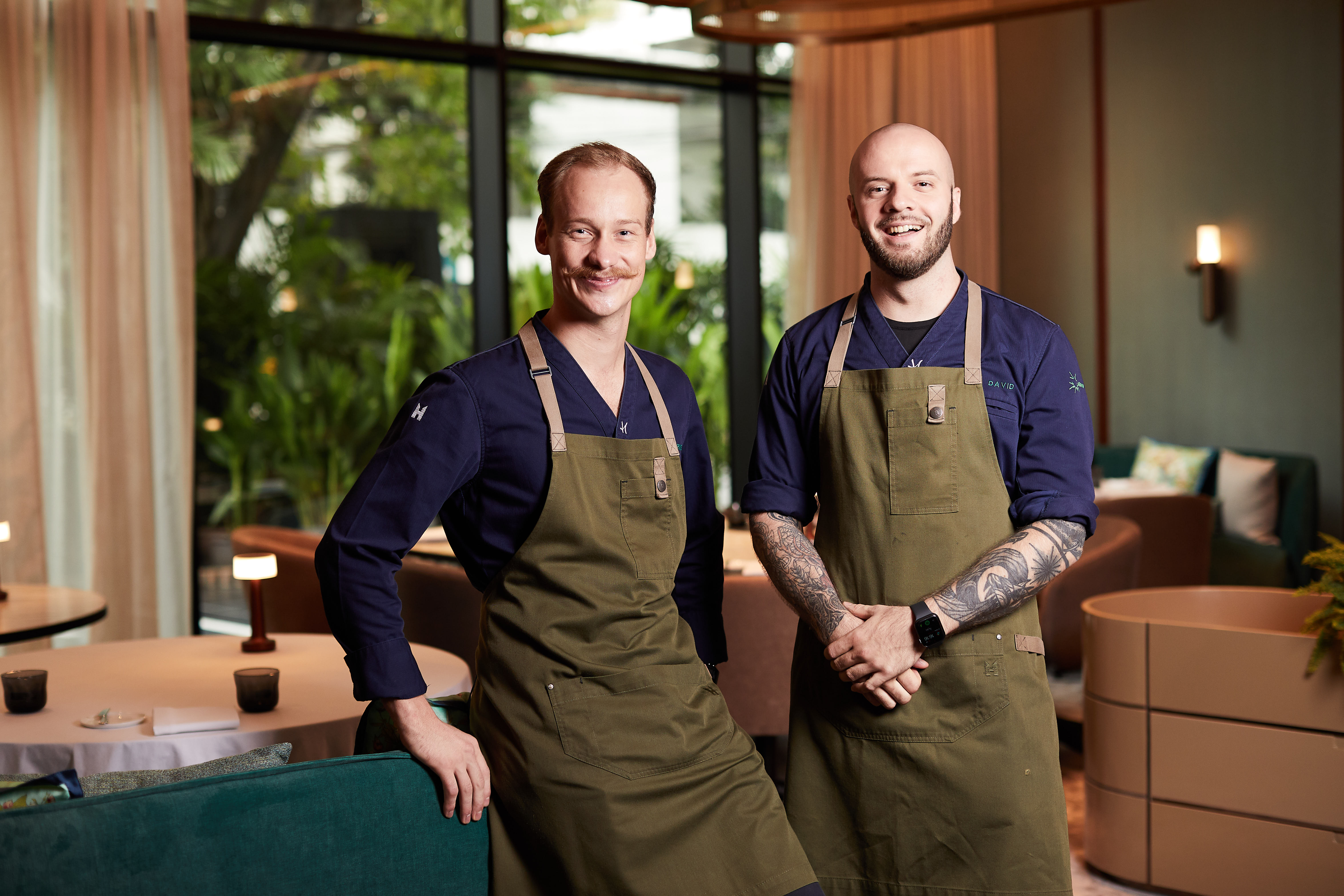 In the autumn menu at Igniv Bangkok, the Michelin-starred restaurant at The St. Regis Bangkok, which runs until mid-December, chef Hartwig revisits seasonal ingredients from his childhood. Though if you’re a regular expect a complete new menu.  “I find it boring to just change a few dishes. I prefer to change the complete menu to give our regulars a taste of the seasons. We may use the sauces again or a few proteins but we don’t keep particular dishes. This menu is game season, kind of an autumn and wintery menu,” says chef Hartwig. Begin at the kitchen counter with snacks of Sunchoke macaron with red onion pickle, Sautéed Brussel sprouts, Veal tartare in between a charcoal cookie (one of my favourites!) and Mushroom ice cream in a porcini cornetto with pickled mushrooms. 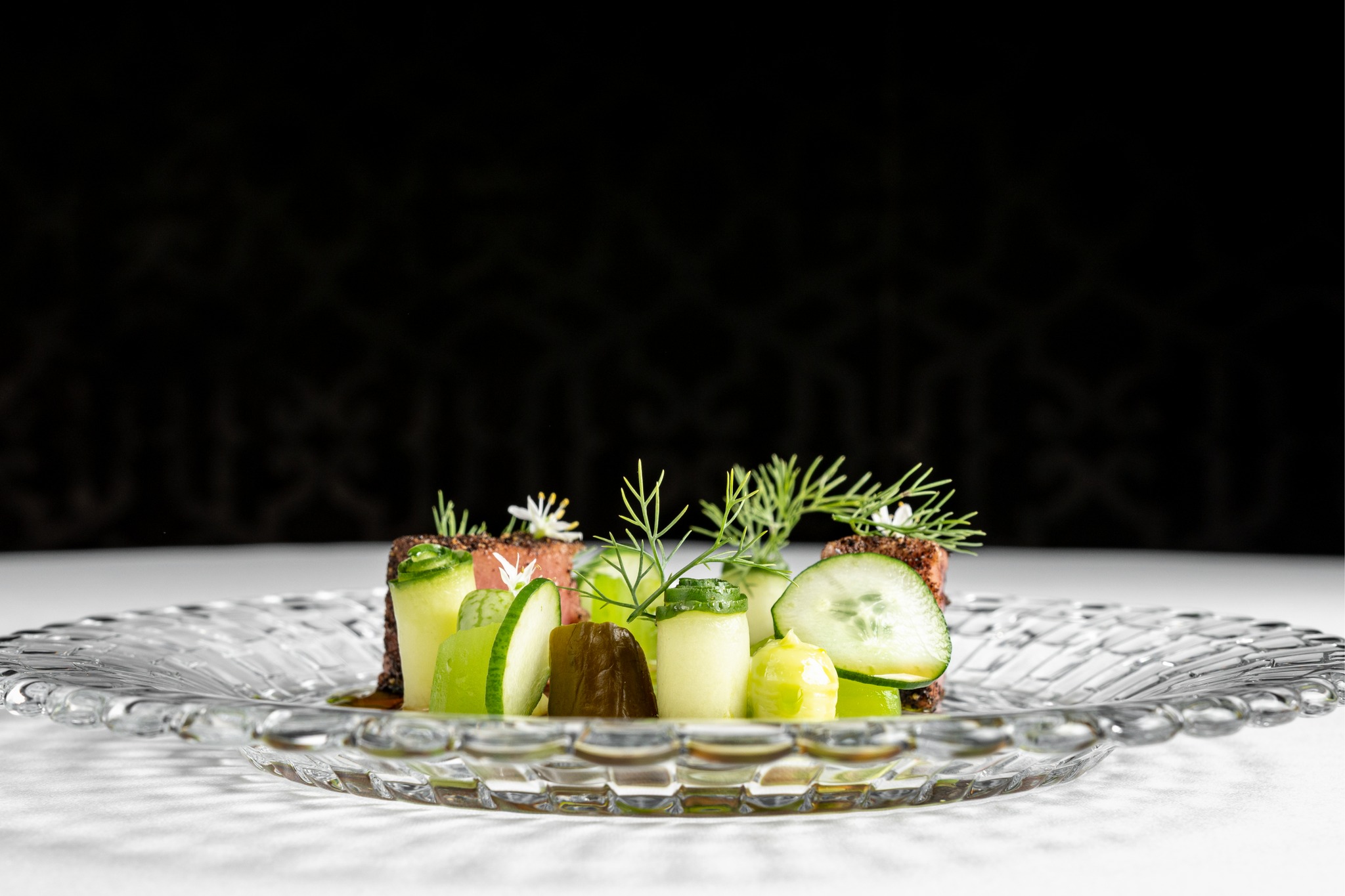 Once you’re lead to your table, you begin with the starters, which showcase the elements of sea and roots vegetables in their glorious prime this time of year. Enjoy three kinds of seafood on one plate in the form of Cured mackerel, tuna noodles and seared langoustine with a tomatillo and cucumber sauce. Red beet carpaccio is served with a carrot salad of pickled and roasted carrots and a generous dollop of creme fraiche. I love horseradish so enjoyed the Horseradish mousse with Arctic char tartare topped with watermelon radish. Another yum, yum and then some dish was the Crab salad with semi-dried watermelon. 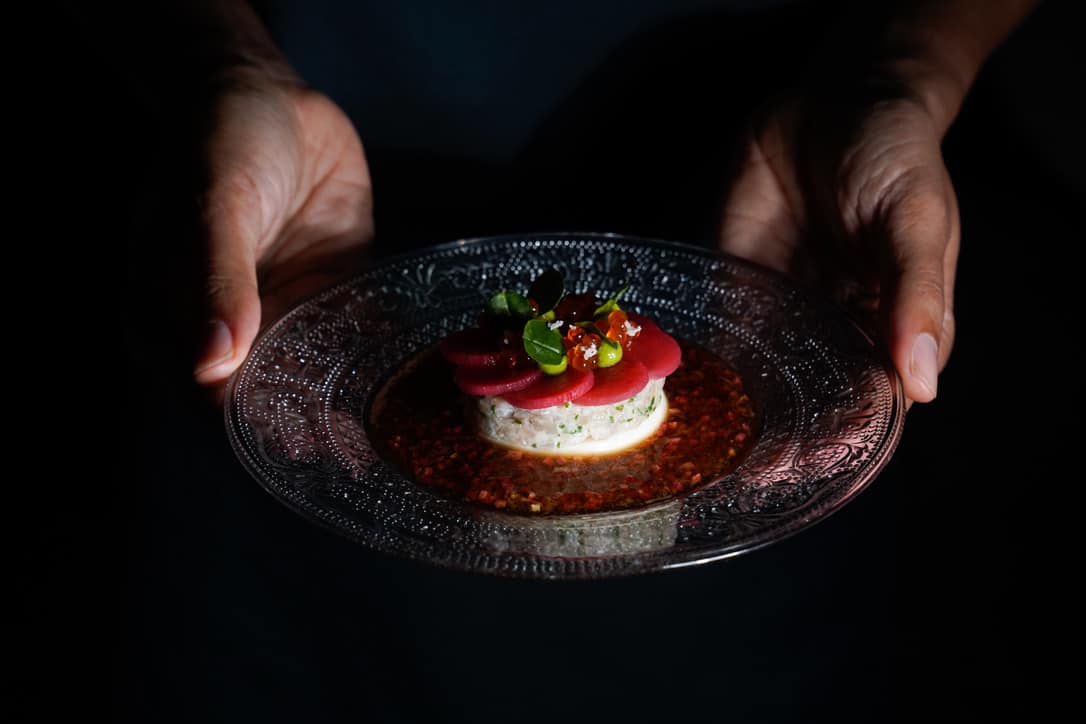 At this point, my eyes are being treated to the beautiful visuals of the tableware and my palate is being indulged with one good dish after another, and it’s making for a very exciting evening. Though I have only just begun!

Starters are divided into two parts and the second is served frozen, hot and cold. An Onion and apple sorbet is served with a lingonberry and mustard foam and forms the frozen element of the course. The hot is a Red polenta, which comes from Switerzland, served with a foie gras mousse and green apple and raisin gel. The cold is a Foie gras terrine is served with grape and a brioche to spread it on.

I’ve said this before and I’ll say it again: when I see sweet bread on the menu, it will be on my table and in my stomach is no time. The Igniv signature is no exception. Though not on the tasting menu, it is part of the a la carte and a must-order. (Read: Make the tummy space for it!) The sweet bread is poached for two hours and pan-fried and served with a turmeric puree and black garlic hollandaise and black garlic jus.

Since we are also in game season, the mains begin with Quail from Udon Ratchathani stuffed with spinach and foie gras and served with a spinach puree and black truffle. The spinach puree being seasoned with, to my surprise, a very Indian spice blend called “panch phoran”. Panch phoran literally translates to the five spices and at Igniv it comes from spice company, famous in Germany and Switzerland, that chef Caminada buys his spice from. “The panch phoran is a base that Andreas always uses for duck and lamb and has been for many years. At the castle [chef Caminada’s three Michelin-starred signature restaurant Schloss Schauenstein in Switzerland, which is in a castle], the spice is used a lot,” adds chef Hartwig.

Venison or deer is served with butternut squash and caramelised apple with radicchio. A dish that appealed to my palate was the Baked aubergine or eggplant with fresh crushed black pepper, served in a paprika mojo. Though the Red and white cabbage tower was delicious, as well. “We juice kimchi and turn it into a sauce by mixing it with carrot jus, just to take away from the aggressive kimchi flavour,” explains chef Hartwig.

One of the best soufflés in town, if not the best, is chef Riehn’s Coconut soufflé. It hands down has the best wobble I’ve seen in a soufflé in Bangkok and is served with a melon salad of pomelo,  pickled grapes, Mexican marigold and finger lime. It is complemented with coffee blossom, rum and raisin. Though there is also the ice cream mochi with toasted rice and passion fruit that arrives at the table with much fanfare. 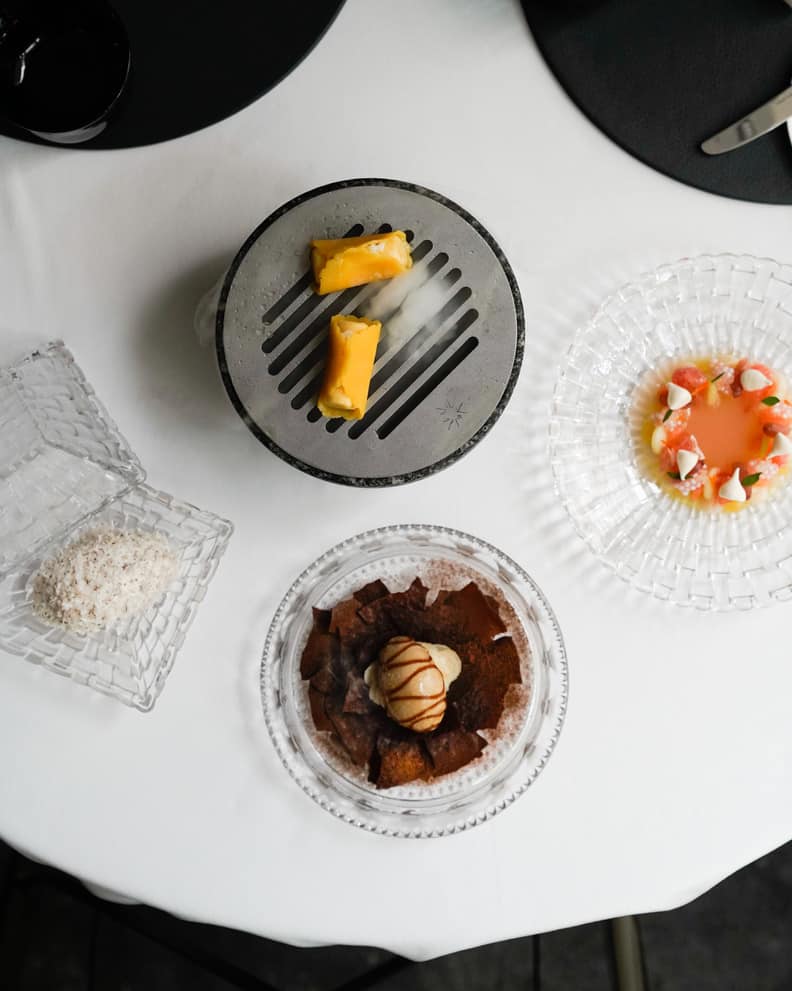 Most of the time we hear the saying, save room for dessert, but at Igniv the saying goes: “Save room for the candy store”. The candy store is little bits and pieces of candy that are on display and you’re allowed to choose what you’d like to take home…. because these are part of my “must eat in bed at midnight” treats.

“Our menus are a mix of European, local and worldwide seasons. We follow our home seasons and also the seasons here, which make certain ingredients different and sometimes available all year around. In the winter menu, we will have tomato, which will never happen in Europe but here its in season so that allows us much more variety,” explains chef Hartwig.

The menu at Igniv Bangkok is available for lunch and dinner, Thursdays to Mondays at B4,500++ per person. Call 02-207-7777, email igniv.bangkok@stregishotels.com or visit ignivbangkok.com.