An eccentric Nakhon Si Thammarat burglar who drops in from the ceiling rather than breaking in the conventional way gave himself up after his mother intervened following his latest exploits.

Panya "John" Promkerd, 28, handed himself in to Thung Yai police on Nov 22 accompanied by his Mum, who had seen publicity of a theft in the district and assumed the culprit was her son. 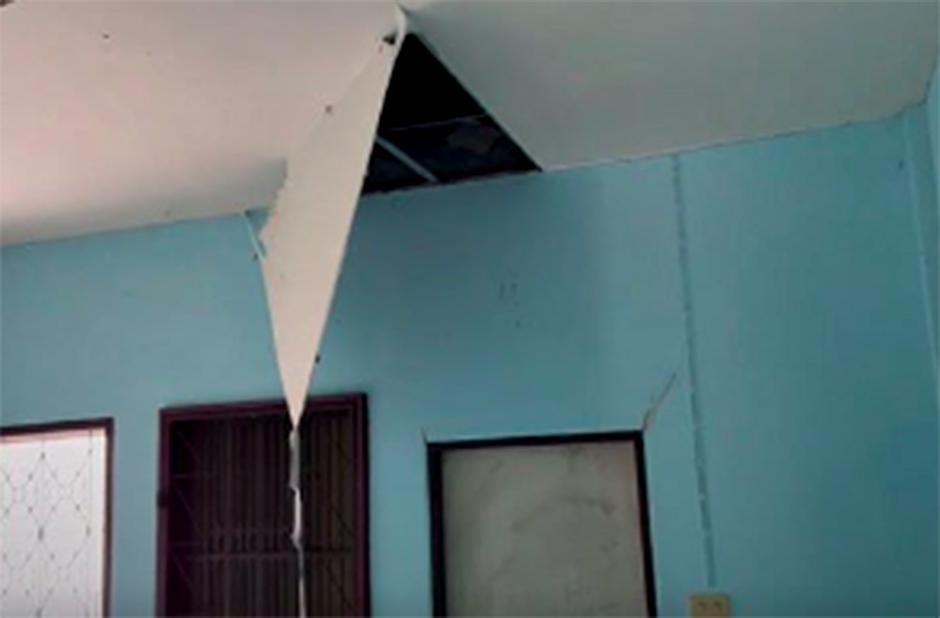 The hole which suspect Panya left in the roof.

About 2am the day before, a ninja-like thief dropped in from the roof of a teacher's rental home in the district and robbed 500 baht from her.

Sasitorn Dechkrua, 29, who teaches at a primary school in Khao Phanom, Krabi, said she was asleep when she heard a strange noise from the bathroom.

"I got up to look and a heavily built intruder suddenly turned up by my side," she said.

She had gone to bed without locking the door of her place in the single-storey row house, though the burglar didn't come in through the door, but the ceiling.

John entered through the roof of an empty rental unit at one end of the single-storey complex, and crawled along on beams until he found Ms Sasitorn's place at the other end. He booted a hole in the ceiling and dropped down into her bathroom. It is unclear why he chose her place, but claims he meant her no harm.

Ms Sasitorn said the burglar put his hand over her mouth and told her not to make any noise. She put up a fight, hoping to get the attention of her neighbours, but without success.

As she regained composure, Ms Sasitorn, perhaps figuring out the thief was not very bright, said she had no cash but offered to transfer him the money via an app on her phone.

"If you do that, the police will find me, as they will trace the account number," he said, up with her tricks.

John, a trusting soul, gave her his girlfriend's account number, and she transferred the money.

He also asked her for sex, but she turned him down. "I said whatever I have, he can take, but just leave me alone," she said.

John had second thoughts and decided to abandon the sex quest. He also told her not to go anywhere, as he intended to return the money as soon as he was over his financial difficulties.

Before leaving the same way he came in -- through the ceiling -- the genial thief offered Ms Sasitorn some caring advice: "Every time you go to bed, don't forget to lock the door, because you are here alone, so it is dangerous."

John's exit was anything but tidy, however, as he cut himself on exposed aluminium in the roof as he lifted himself back in the hole, leaving blood spattered on her bathroom floor.

Ms Sasitorn, who called police, was wearing her nightwear and still in a state of shock when they arrived. While the thief was wearing a mask, and did not turn on the lights while he was there, she thought she recognised his gait and the sound of his voice as those of a neighbour.

When he handed himself in, John was bandaged on his left elbow, one of the injuries he suffered as he made his escape.

He had not yet had a chance to spend the money, he said, as it was still in his girlfriend's account. He entered via the room at the other end of the rowhouse as the ceiling was broken and no one was living there, he told police.

After leaving Ms Sasitorn, he visited a local health centre to get his injuries treated. Shortly after his mother called asking him to turn himself in. John was released from jail recently on drug charges.

Ms Sasitorn said she had rented the place for the past six months, as it was quiet and cheap. However, after the robbery ordeal she intends to move into rental flats at her school, where at least she will feel safer. Police charged John with robbery.

A Bangkok man found the skeleton of a man thought to be that of his missing younger brother when he opened a long-neglected house in Bangkok.

Ekkamol, 36, had lived in the Klong Tan house alone before telling his family four to five years ago that he was heading overseas. After that, he disappeared, with his family assuming he had indeed gone elsewhere, but fallen out of contact. No one had opened the house since. 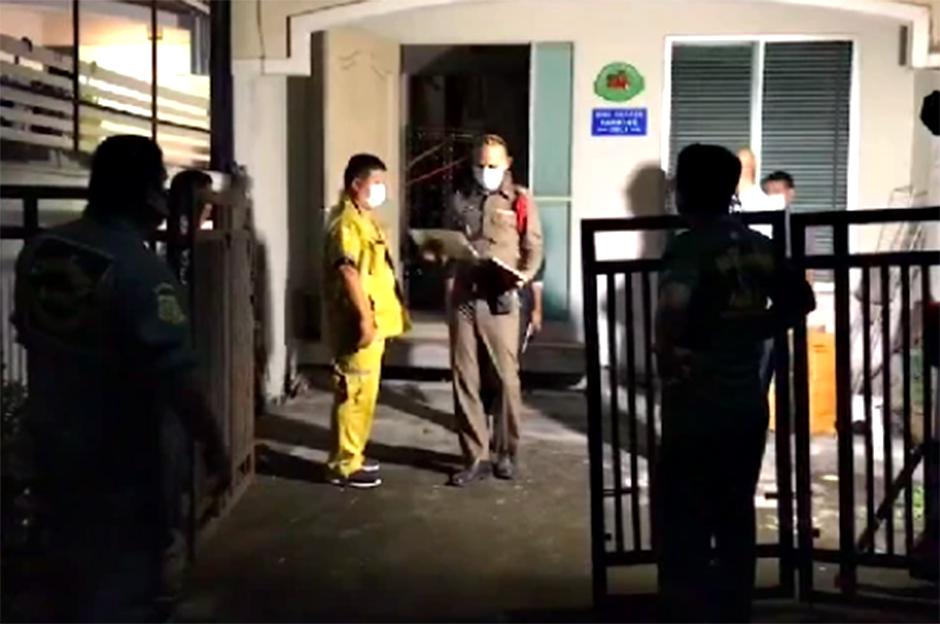 Police at the Klong Tan house where the skeleton was found.

His elder brother, unnamed in news reports, accompanied by a workman entered the three-storey townhouse in Baan Klang Muang Village, Soi Srinakarin 24, last week, intending to do it up. They were shocked to discover the skeleton of a man with an electrical cord around his neck, slumped on the second-floor landing.

Ekkamol, 36, who was out of work at the time he disappeared, had a depressive illness. His elder brother, who owns the place and lives elsewhere, had let him stay there.

After not hearing from him, his family in 2018 filed a missing person report with police, but no one suspected that he may have been in the house all along, they said.

The skeleton was wearing a polo shirt and a pair of black shorts. The man had evidently hanged himself from the third storey of the house, as an electrical cord was found around the bannister.

Upstairs in the bedroom, police found what was probably a suicide note, but the writing has faded so much over time it is no longer legible.

Neighbours said they didn't notice any bad smells from the place as the body decayed, and the house showed no sign of forced entry. Nor did anything appear to be missing.

Klong Tan police sent the skeleton for autopsy to ascertain the cause of death and do a DNA test to confirm its identity, but the family has no suspicions about his death, they said.

A young Sakon Nakhon man killed a friend from his village in a row over a snooker game, though he claims it was accidental. 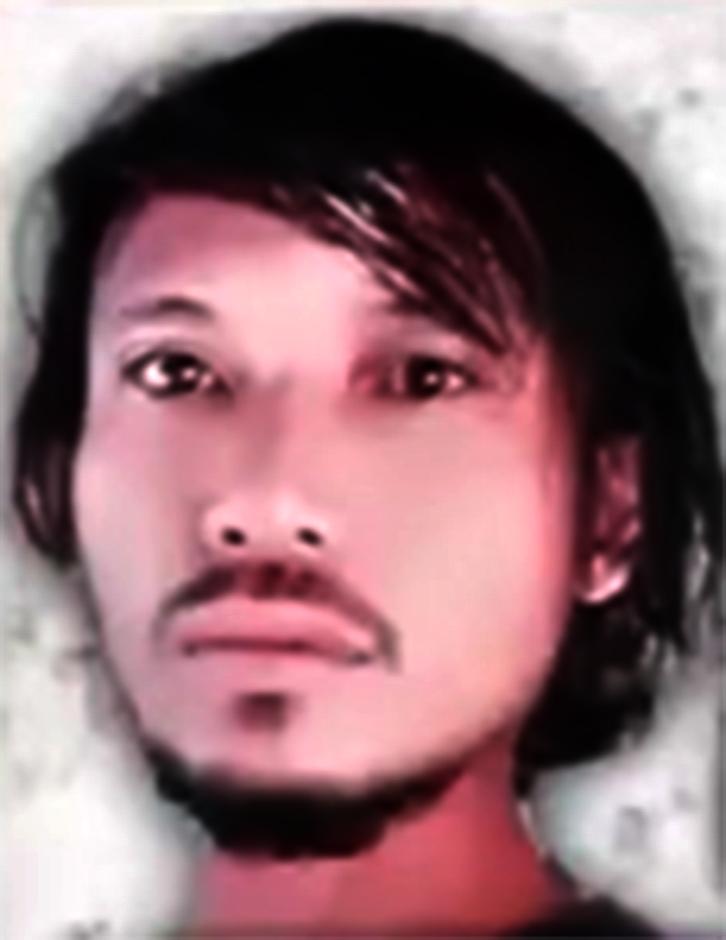 Thawatchai or Wayu Keankam, 23, shot Pornchai Khunkanha, 43, after the victim lost a 100 baht snooker bet and refused to pay up.

The two, who lived in the same village and knew each other, wagered 100 baht on two games at a snooker hall in Sawang Daen Din district.

When the younger man, who won both games, called up his winnings, Pornchai started cursing him and refused to pay.

Mr Thawatchai pulled out a .45 Colt to threaten him into paying up. However, he said the gun accidentally discharged, with the bullet hitting the snooker table and ricocheting into Pornchai's chest. He was taken to hospital but he died there from his injuries.

Mr Thawatchai fled to a resort in Ban Muang district, where armed police nabbed him. Unpersuaded by claims it was an accident, they charged him with murder with intent, and firearms charges.

As he was performing a crime reconstruction, Mr Thawatchai met the victim's older sister, Wanida Saluz. He got down on his knees and offered a wai of apology, which she tearfully accepted.

Pornchai made a living collecting old wood for sale, she said, but lived alone and had no family. She herself has no work, and she asked Mr Thawatchai to help with funeral costs, as the family is hard up.