Forbidden fruit, out for a spin, hairy pawnshop escapade

No longer in fine voice

A Bangkok man shot a Laos admirer at a karaoke shop after his wife accused him of seeing the woman behind her back, before taking his own life.

Police were called to the shop in Tha Kham, Bang Khun Thian where Wutthichai Pramkrathok, 32, turned the gun on himself after earlier shooting and wounding Aoijai Phachomphu, 22, whom he had been seeing on the sly for some months, and her aunt, Sulee Pimsee, 31. Both worked at the shop.

They were sitting inside having a meal when Wutthichai walked in, picked a fight, and shot the pair before turning the 11mm calibre weapon on himself.

Earlier, Wuttichai's wife, Panida Pramkrathok, 27, had accused him of resuming his affair with Ms Aoijai after a period of about six weeks in which his conduct appeared to improve. 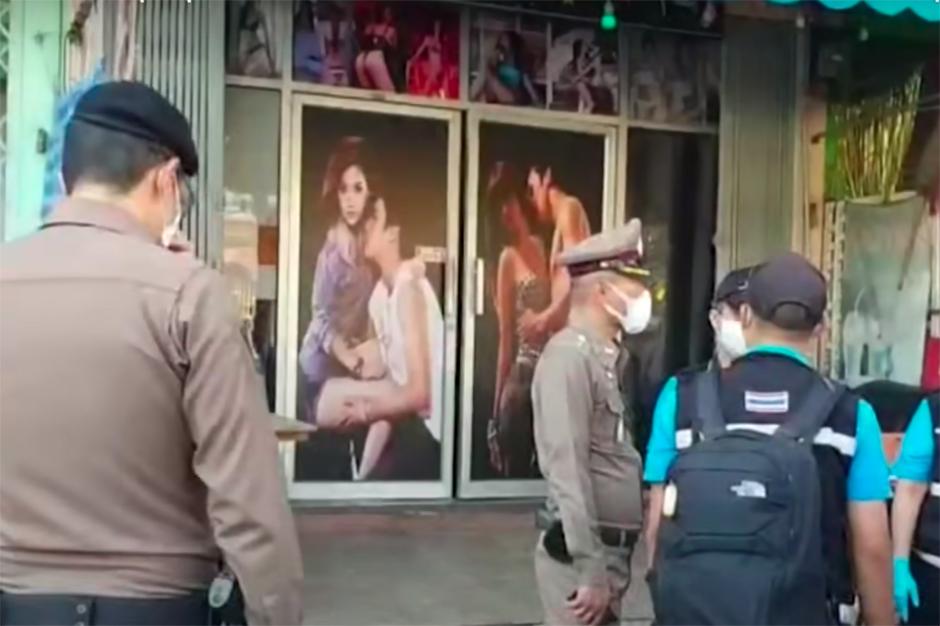 The karaoke shop where Wutthichai shot himself after shooting and wounding Aoijai and her aunt.

In fact, Ms Aoijai had merely gone back to her home country for a break. When she returned, Wutthichai's behaviour started to deteriorate again and Ms Panida challenged him to come clean. He insisted he had stopped seeing her.

"My husband said if you don't believe me I will take you there myself and clear things with her," she told police after the shooting.

Wutthichai took Ms Panida along with him to the shop, but asked her to wait outside with their two-year-old child while he went in and spoke to Ms Aoijai. However, he was in there just a few minutes before she heard gunfire, and staff ran out in fear of their lives.

"I knew he had a gun, but didn't know he had taken it with him that day, or I would have called the woman to warn her," Ms Panida said.

Wutthichai worked for a fertiliser company in the Mahachai area and was also a rescue worker in Thon Buri. They had been together six years and had a child together.

After growing wary of changes in her husband's behaviour, Ms Panida discovered he was seeing Ms Aoijai after looking at texts on his phone. She contacted Ms Aoijai through a friend and told her to keep her hands off her husband.

"I told her to stop meddling as our family could break up, but it looked like she wanted to keep trying. My husband, though, promised he would steer clear."

Over the four months or so they were seeing each other, things appear to have changed. Staff said Wutthichai had started turning up outside the shop every day after Ms Aoijai's return from Laos, keeping an eye on things. It is not known if they actually met.

Meanwhile, Ms Aoijai complained to her friends that she wanted to quit but Wutthichai would not let her go. She fled back to Laos for six weeks and had been back at the shop just five days when she was shot.

Ms Aoijai, who was shot in the right side of the chest and right arm, told a friend she had stopped seeing Wutthichai, but Ms Panida did not believe it.

She had earlier left the shop where the shooting occurred to work elsewhere, which is where she met Wutthichai.

When she returned from Laos, she went back to the karaoke shop which hired her previously, and was shot there when Wutthichai paid his visit. Ms Aoijai's aunt, Ms Sulee, was shot twice in the left calf. Both victims were admitted to hospital.

What's yours is mine

A cheeky Udon Thani druggie who stole a local's car came face-to-face with the owner after a five-day jaunt which came to an abrupt end when he ran out of petrol. 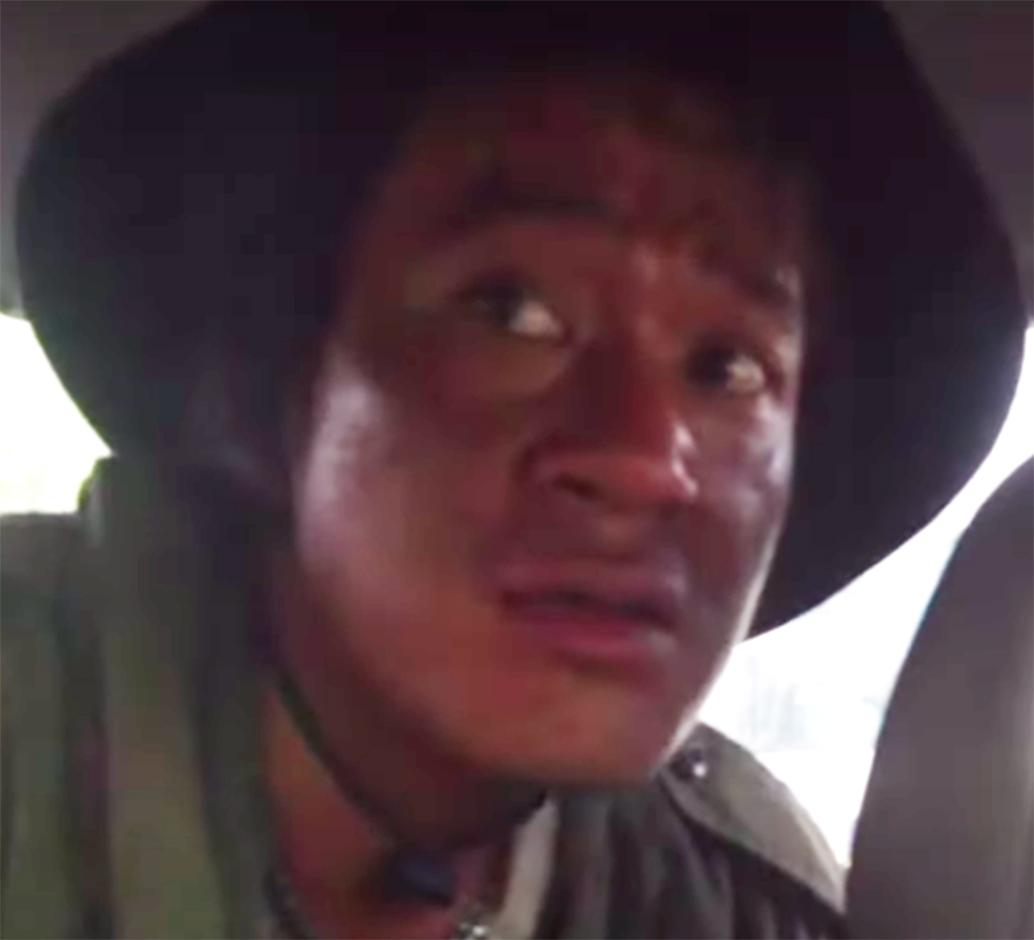 Owner Arthit Naboon, 39, slapped the thief, Lui, 35, who was wearing a jaunty hat, several times over the head in scenes caught on video. Locals had to step in to restrain Mr Arthit, who said Lui had stolen the Mitsubishi Triton from outside his house, betraying his trust.

Undeterred, Lui kept insisting he had merely taken it for a drive, not stolen it. Earlier, when locals confronted him at Wat Surapol Sopanusorn in Nong Han district, where Lui had gone to beg for food as he figured out what to do about the stranded vehicle, he insisted he was the rightful owner.

Mr Arthit said he was outside his house in Nong Han on Friday last week when Lui, whom he knew by sight, walked over and asked for a light. Mr Arthit said he went inside to find a lighter when he heard the vehicle engine start and Lui drive away.

He reported the theft to Ban Dung police, but it was solid networking by locals which helped track him down.

Village head, Direk Laowanich, said locals alerted him to a mystery car parked by the roadside with a burst tyre. He had seen a post at a local FB page about a stolen vehicle fitting that description, so contacted police.

Locals later told him Lui had been seen begging for food at the temple, so he took a group of village leaders there and they nabbed him. 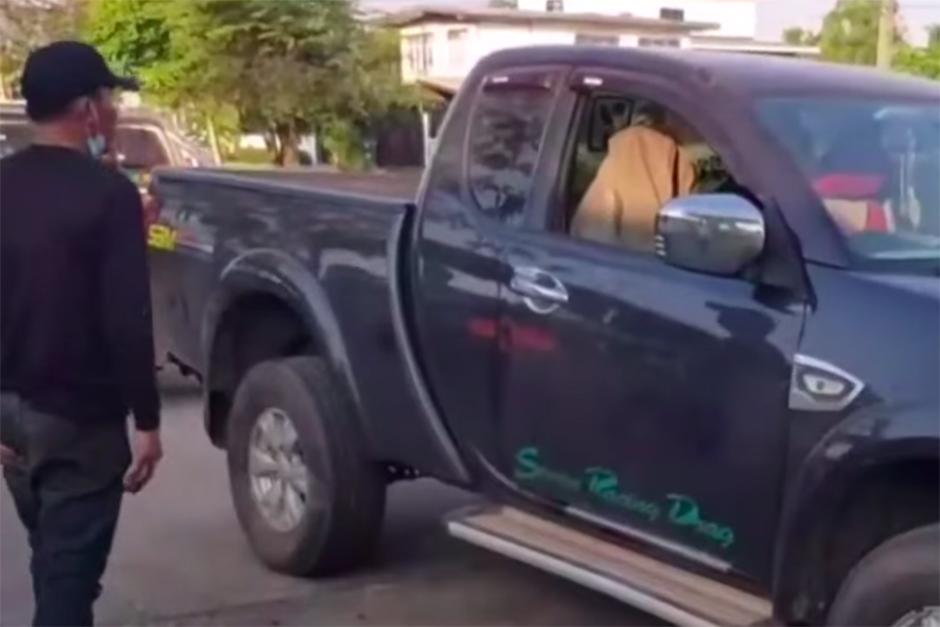 The car which Lui took was found five days later.

Moments later, Mr Arthit, who had evidently been out looking for his stolen vehicle, turned up. He spotted Lui, charged over and demanded to know why he took the car. As he slapped Lui over the head, the thief put up no fight.

Talking to locals about his five-day escapade, Lui said he had asked a friend for 20 baht the night before so he could recharge the tank. At some point in his five-day journey the tyre also burst, which he had to replace. He had taken friends for a drive, he said.

Weerapol Raksamerwong, head of the FB site "Ban Dung update", said Lui was known for an earlier caper in which he let himself into a resident's home, turned on the air con and took a nap, even though it was not his place. A drug user, he had spurned efforts to send him to rehab, and was also known for petty theft.

Lui, he said, was also found with the keys to an Isuzu, also presumably stolen, though no one knows where he left it. Police charged him with theft of the Triton.

A hairdresser who fell into debt opening his business tried to rob a pawnshop to get out of trouble but failed spectacularly, forcing him to flee on foot. 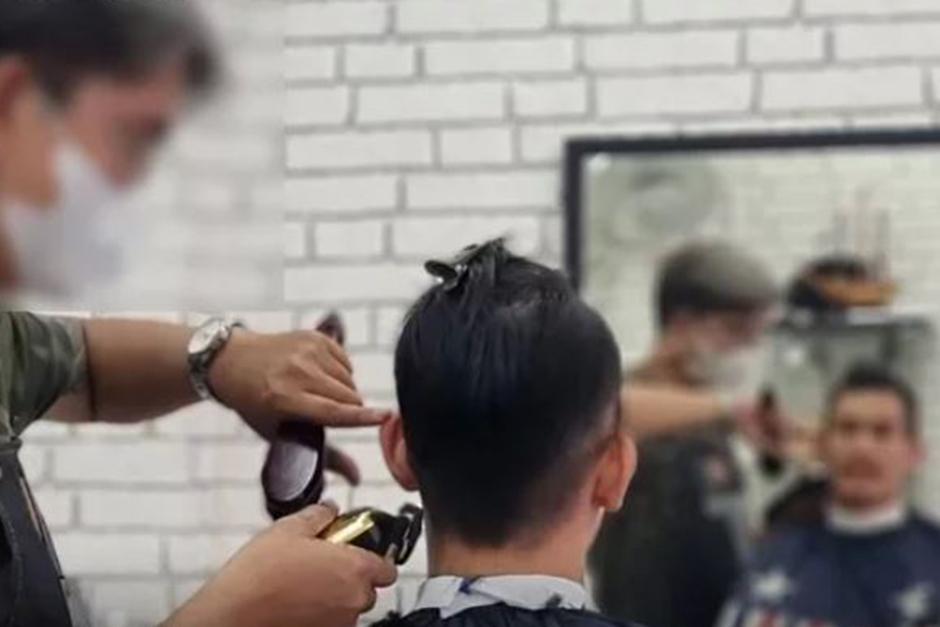 Phuttarak, cutting the policeman's hair at his shophouse.

Police images showed the officer getting his hair shorn before he identified himself and made the arrest. They seized a plastic revolver which Mr Tong used to commit his crime along with his motorbike getaway-vehicle.

Mr Tong admitted trying to hold up the Easy Money pawnshop at the mouth of soi 50 in Phra Ram 2 Road on Jan 14.

CCTV vision showed the hairdresser approach a security guard, Samart, aged 35, outside as if to ask for directions. He whipped out the plastic gun, turned Samart around and had him escort him inside.

However, staff saw what was going on, and quickly pressed a button locking the door from inside and sounding a police alarm. They fled deeper inside the shop.

Mr Tong, realising he would get nothing from them, forced the guard to take him outside again, abandoned his robbery attempt, and fled on foot. He was caught at his shophouse hours later.

The hairdresser said he borrowed 50,000 baht from underground lenders to open the shop, but could not afford the 3,000-baht daily repayments. He decided to rob the pawnshop to repay his debts, but failed.

Earlier, Mr Tong bought the toy gun, put a change of clothes in his backpack, and left his motorbike outside Wat Tha Kham. From there, he took a taxi to the scene of the robbery.

After fleeing the shop he changed under an apartment building into his spare outfit and took another taxi back to his motorbike. He drove back to the shophouse and went back to work.

Samart, the security guard, said he was standing at his desk outside the pawnshop, which is next to a gold shop, when Mr Tong approached.

He looked as if he was deciding which shop to enter. But while the gold shop wasn't fully open for business as the door was still half closed, the pawnshop was open.

"The thief made as if he wanted to ask a question but pulled out his golden revolver from his waist and held it to my back. He said if I did anything tricky, I would die," Samart said.

Moments later, it was all over, and the thief, having failed to bring his own vehicle, was forced to flee empty-handed on foot.

Police set up a roadblock but were unable to catch him until his arrest later, when they charged him with attempted theft.