Civic groups want one system for everybody 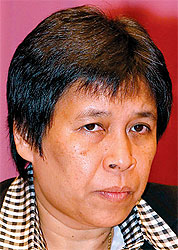 The minister says he plans to relaunch the scheme in the next three to six months, to replace the universal healthcare (gold card) scheme.

The 30-baht universal healthcare scheme was introduced by the first Thaksin Shinawatra administration but was later abolished by the Surayud Chulanont government following the September 2006 coup.

The group said a single scheme would be better, in line with the 2002 National Health Security Act.

More than 90,000 people pushed for the act, which aims to eradicate discrimination and unfairness in the healthcare system.

The government should work towards a single standard for health, the group said. At present the country has three healthcare schemes _ one scheme for civil servants, the social security fund to cover workers, and the universal healthcare (gold card) scheme.

Saree Aongsomwang, Foundation for Consumers (Thailand) secretary-general, said the return of the 30-baht scheme was a digression from the main issue of developing and streamlining public health services.

Chalome Ketjinda, from the Consumer Association of Songkhla and coordinator of the southern network for national health security, said the government should work towards a single standard in public health services.

The NHSO oversees the gold card system. A recent investigation by the Office of the Auditor-General into the NHSO finances turned up apparent irregularities.

The selection process for board members of the NHSO's National Health Security Fund also came under scrutiny.

Sureerat Trimalka, coordinator of the Friends of the Public Health Security, said civil society representatives would meet the fund's new board today.