Dishes the march of time passed by
Life
Social & Lifestyle

Dishes the march of time passed by

Many traditional Thai recipes have evolved to suit today's faster pace of living, but thankfully there are still some classics that remain exactly as our ancestors enjoyed them

There are different schools of thought on how we should treat our culinary tradition. Some believe that it should be carefully preserved and shielded from change, while others maintain that our cuisine should evolve in step with the times. In line with this second viewpoint, it is true that many of the dishes that are familiar now have changed greatly over time. 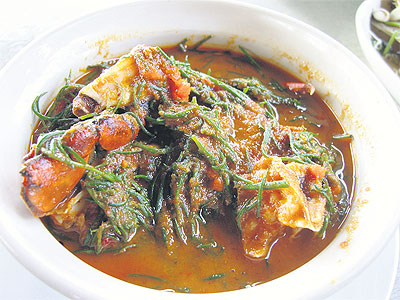 SEA AND SAVOUR: ‘Kaeng khua pu’ (a crab curry) with the leaves of the chakhram plant is another dish made in households near the sea.

One good example is the group of well known pad prio wan (sweet and sour) dishes. These days they are made with baby corn, tomatoes and bell peppers and flavoured with a red-coloured chilli sauce that combines sourness and chilli heat with sugar and nam pla.

In the past, the preparation was very different. Regardless of whether they were made with pork, chicken or shrimp, they would have to contain cucumbers, onions, tomatoes, the big, mildly hot chillies called prik yuak in Thai, and pineapple, and be flavoured with clear vinegar, sugar and nam pla. Cooks who wanted to give these dishes a little colour would use sour tamarind instead of vinegar. Some also added a little starch. This is the original version of the sweet and sour recipe.

Another dish that has been transformed is gai pad met mamuang (chicken stir-fried with cashews). Now it is usually made by frying chicken with chilli paste and cashews and then adding spring onion. 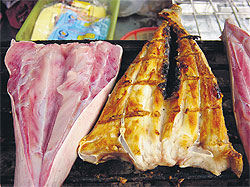 The original version was very different. Pieces of chicken meat would be marinated, then stir fried with soya sauce and a little flour. When it was done, it would be set aside and some onions would be fried with cashews, oyster oil, soya sauce, chilli sauce, dried chillies and cane sugar. Then the previously cooked chicken would be added to the pan followed by spring onion and sliced hot chillies of the type called prik chee fa in Thai.

With both of these examples, it would be difficult to say that they should have been kept in their original forms because there are clear reasons why the older versions were altered. Nowadays, requirements for fresh and dried ingredients are not what they once were and food often has to be prepared quickly, especially if it is being made for sale. When it has to be cooked in quantity, preparation should take as little time as possible, and the finished dish should be visually appealing. When large quantities of food can be made quickly, profits are high. This is the age of buying food for takeaway.

In the past, food was most often cooked by someone who was going to eat it. The ingredients were usually at hand, and they varied from season to season. The amount of food prepared was generally just enough for a meal, with no leftovers. But if an extra large amount of food was required, there had to be a way to save what was left to eat the next day.

The demands of modern living make it necessary for people to eat outside the home. They have become used to fast food and take whatever looks good. As a result, people these days are familiar only with the narrow range of dishes that are staples at food shops, and they are happy to stick with those. If they are confronted with an old-time dish that has disappeared from menus and that they don't recognise, they are often unwilling to give it a try.

Given those trends, maybe it is a good thing that there are some Thai dishes that have not been touched by change. Most of them are recipes made with ingredients that are available from nearby natural sources. These dishes are usually eaten by families, and may be made often so that younger family members grow familiar with them and won't let them disappear. 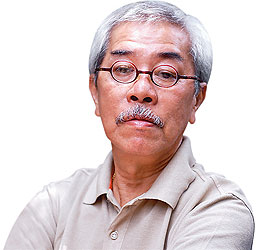 For example, families living in houses next to canals or rivers might set nets in the water in front of their homes to catch fish. If the catch includes both large and small fish, the big ones can be steamed and the smaller ones used to make a dish called kaeng sap nok by mincing the entire fish very fine and forming the meat into small balls or patties that are then cooked into one of the spicy, coconut cream-based curries called kaeng pet.

Likewise in the past if a family caught a sandfish, or pla sai, the meat could be chopped fine and used to make the spicy, deep-fried fish patties called thawt man pla, while the fins could be breaded with flour and deep-fried to make choeng pla krai thawt. These fried fins contained hard bones but had a rich flavour and were especially tasty as the flour used to bread them was mixed with coconut cream and salt. The dipping sauce they were served with was the same as that eaten with thawt man patties.

These days pla sai have become very scarce, and wherever you find thawt man it is made with another fish called pla krai. The fish balls used to make the spicy curry called kaeng khio wan are made from pla krai too, as is the spicy stir-fry called pad cha. No one makes choeng pla krai thawt for sale any more.

Whenever a household catches local fish such as pla daeng, pla ma, pla khao or pla thaypho, they might use their catch to make a soup-like dish called kaeng som poh (also called kaeng naw mai tom pla ra _ bamboo shoots cooked with fermented fish). Bamboo shoots are gathered from near the house and cut into thin slices that are then scalded in hot water. After that they are cooked with pla ra (fermented fish), palm sugar and nam pla so that the sweet taste is prominent. When the bamboo is fully cooked the fish are put in, and that's all there is to it.

Another similar local dish is kaeng pet kan bawn. The plant called bawn in Thai is an aroid that grows in moist places. It has a very irritating sap that causes itching, so not many people cook with it, but the sap only has this effect when it's fresh. This can be prevented by letting plants dry overnight. Then the stems can be used to make a delicious curry because they are spongy and tender and soak up plenty of the spicy sauce.

One other dish that has become a rarity is kaeng khua choeng pla kraban yang. The pla kraban (skate or ray) has tasty cartilage, but to prepare it the fin on the back must be removed and grilled until it is dry. Then it can be made into a kind of semi-dry curry called kaeng khua, which contains no vegetables. It is very good, but chances of finding it are slim outside of some seaside households.

These are a few of the old recipes that most people have never tasted, but that survive in certain homes where they are being passed down to younger generations. And it is a lucky thing that they are not being made for sale and served in restaurants because if they were easily available and became popular, changes and simplifications would inevitably be inflicted on them, and the day might come when no one remembered what the original versions tasted like.