Rattanapan Pansri only wished to hear some good news from the second doctor about her husband who was earlier diagnosed as suffering the final stage of colon cancer. Unfortunately, the second opinion turned things from bad to worse.

"The first doctor said my husband would die within four months. And at that time our three kids were still very young. I didn't know what to do," recalled Rattanapan. "We sought a second opinion and the situation got even worse. The second doctor told us that our primary doctor lied and that the truth was my husband would not live longer than two months."

Rattanapan's husband, Kampon, decided to undergo an operation to remove parts of his damaged colon while the rest of the colon, unfortunately, still did not function well. While Kampon saw no improvement in his condition after the operation and got weaker every day, Rattanapan was forced to think about preparing for a funeral.

But while conventional medicine was not able to save her husband's life, Rattanapan finally found hope in a herbal remedy _ pak-king grass.

"I realised many years ago I used to feed pak-king grass to my father who was then suffering skin cancer and, surprisingly, his condition improved. So I thought why not try this with my husband. I started preparing pak-king grass juice for him twice a day. My husband was taking it regularly for 12 years. Now it has been almost 22 years since his cancer diagnosis and now the doctor finds no trace of malignancy in his body," said Rattanapan, a retired nurse.

Chananya Songprapa shared similar positive experiences with pak-king grass after the weed, which was thought to originate from Yunnan, China, successfully kept her psoriasis _ a chronic inflammatory skin disease _ at bay.

"The disease started with itching especially in the areas underneath the clothes. And the more I scratched, the more pus-filled and yellowish bumps developed," recounted Chananya, a finance and budget officer. Symptoms of psoriasis involve the abnormal and rapid proliferation of skin cells which bring about thickened and red skin. The disorder is caused by an abnormal immune system.

Chananya visited a doctor and was prescribed three doses of medication both for oral and external use. Despite no improvement, she was advised by her doctor to stop taking the medicine after finishing all the doses to prevent chemical accumulation in her body. She decided to try pak-king grass as recommended by one of her friends. She bought ready-to-drink pak-king grass juice from a supermarket and drank one bottle every other day. Only one month later, the pus-filled bumps dried out, the affected areas got much smaller and there was almost no more itching. 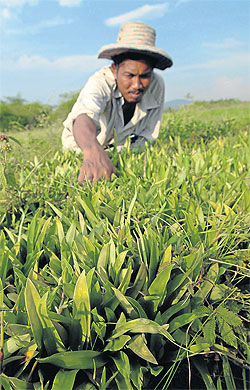 Murdannia bracteata or pak-king grass is sometimes referred to as Ya Tevada , or cure-all grass.

"I have been dependent on pak-king grass juice regularly for 10 years so far. I used to stop [drinking] it for a few months and then I started to itch again. Now the skin disease is cured. My doctor was astonished," said Chananya.

Pak-king grass or Murdannia bracteata has become more popular as an alternative cure among patients who fall victim to several diseases especially cancer. According to Supaporn Pitiporn, chief pharmacist of the Chao Phraya Abhaibhubejhr Hospital, even though cutting-edge medical technology to conquer cancer is now widely available, surprisingly the number of patients suffering cancer has been constantly on the rise.

"Currently the number of cancer patients in Thailand increases by 23% each year which accounts for approximately 240,000 newly diagnosed cases annually. And about 60,000 Thais die of cancer each year," said Supaporn.

To back up the effectiveness of pak-king grass as a cancer remedy, Assoc Prof Wisuda Suwittayawat, head of the Medicinal Plant Information Centre, Mahidol University's Faculty of Pharmacy, cited laboratory trials on mice and explained that pak-king grass contains anti-inflammatory and anti-mutation properties.

Wisuda also added that pak-king grass is proven to be effective in preventing mutation of cells. The grass also alleviates side effects caused by conventional cancer treatments such as chemotherapy and radiation therapy including nausea, drastic weight loss and burning.

"Pak-king grass also boosts the production of DT-diaphorase _ an enzyme whose function is to get rid of toxic substances that can be the cause of cancer. It also stimulates the body's immune system and the production of enzymes which act as antioxidant agents," noted the pharmacist, adding that there has not yet been any clinical trial on humans regarding the effectiveness of the herbal healer.

"So if you want to take pak-king grass regularly to keep your cancer or other diseases at bay, I would suggest you take it in the form of juice as the calcium crystals found in pak-king grass leaves would be broken down during the juice-making process," advised Wisuda.

Those who are not diagnosed as suffering cancer, however, have no need to take pak-king grass as a preventive shield against malignancy.

"There is no way we could eat all types of herbs to prevent all diseases. If you do so, it means you put too much unnecessary workload on your liver and kidneys," noted Wisuda. "Therefore, just like any other types of herbs, I would suggest that they are consumed properly and appropriately. Otherwise, your liver and kidneys will have to work very hard to get rid of what exceeds the body's requirement."

"So the best defence against diseases is to consume adequate nutritional intakes each day, avoid grilled food which contains a high amount of hydrocarbon believed to potentially cause cancer, have enough rest and exercise regularly. When it comes to health, bear in mind that too much of something is not good."

HOW TO PREPARE THE HERBAL REMEDY 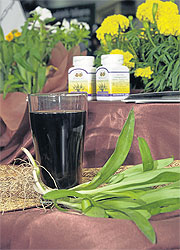 This is the most popular pak-king grass preparation method. Rinse pak-king grass with water. Dip the entire grass (including leaves, trunks and roots) in saline or vinegar solution (two teaspoons of salt or vinegar per one litre of water) for 20 minutes. Pound three grass leaves using a clay or wooden mortar until it becomes a paste. Add two tablespoons of boiled water. Then strain it through white thin cotton cloth. The correct dose for adults is two tablespoons of grass juice twice a day: 30 minutes before breakfast and at bedtime, while children are advised to reduce the dose to  to 1 tablespoon.

Ideally, this recipe should be prepared by using fresh pak-king grass. And the drink should not be kept overnight.

Steam about 10 pak-king grass leaves until they become very soft and tender. This should take approximately eight hours. The liquid from the steaming process can be sipped all day, but it should not be kept overnight.

Put 6-7 pak-king grass leaves as well as half a glass of water in a juicer. Add apples or other seasonal fruits and juice them together. Drink three glasses of this pak-king juice per day.

PRECAUTIONS Possible side effects of pak-king grass concentrate, after being consumed for seven to 10 days, include sleeping difficulties and bad mood. Some people will experience dark-colour urine or faeces. These conditions are signs that the grass is taking effect and will later disappear. After taking pak-king grass concentrate for more than 20 days, if the disease does not improve, patients should stop the remedy. This reaction suggests the body does not respond to the herb.

Pak-king grass is categorised as a cold herb. Those with low body temperature are therefore advised to add a few slices of ginger or Chinese wolfberries during the grass preparation process.