Women's volleyball coach Kiattipong Radchatagriengkai is committed to his role

National women's volleyball head coach Kiattipong Radchatagriengkai takes his responsibilities far beyond the call of duty _ to him the team is family. 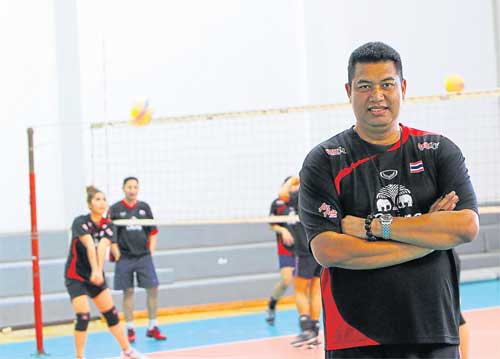 His long-term vision for the progressive development of volleyball in Thailand and attention to detail in managing people have contributed to making the present team the most successful in decades: they are ranked fourth on the World Grand Prix Circuit and 12th on the official volleyball world ranking.

Apart from teaching them the tricks of the trade, Kiattipong, who is popularly known as Coach Aod, has also played an intense role in the lives of his players since he took them under his wing as a bunch of hyperactive pre-teens more than 15 years ago. Being a disciplinarian might not always make him popular with the players, but when it comes to their emotional needs, they know they can count on him to lend an ear.

On the work front Kiattipong hasn't disappointed. Under his watchful eye the young Thai talents have grown from strength to strength, both as professionals and individuals. Today the team's achievements on the world stage have been studded with victories over volleyball powerhouses China, Cuba and Japan, among others.

The team's biggest disappointment this year was not making it to the Olympic Games in London.

Their hopes were dashed after controversy broke at the World Olympics Women's Volleyball Qualification Tournament in Tokyo, when the Japan-Serbia tie was investigated for match-fixing. Thailand, said Kiattipong, finished the round-robin duel on a high note by beating Cuba 3-2.

However, Japan's shock defeat to Serbia automatically pushed the Kingdom out of contention for the Olympics.

"The girls were utterly devastated with the result because we were so close to making it," said the veteran coach. "For everyone's sake, I had to put on a brave front. I also encouraged each player to think positively because we had matches to compete. Being emotionally fragile would also make things worse.

"I told them our souls had reached the Olympics, and that mattered most. I have to admit this was probably one of the most challenging times for me as a coach. Telling them to rise above the occasion is easier said than done."

As national ace spiker turned coach, he knows only too well the need to plan ahead to enjoy success in the future. Much of the credit goes to the ongoing development plan "The 2001 National Team Project" which focuses largely on goal-orientated plans for success with teams from all age groups.

Kiattipong has long seen the need to build coaching talent, both in rural and urban areas.

Equipped with an international volleyball coaching licence, he has taken it on himself to drive miles to impart sporting knowledge to physical education teachers in remote areas across the country. This network of coaches has helped him recruit fresh talent.

Kiattipong believes that the women's national volleyball team has reached the pinnacle of success this year.

He also says with conviction he has trained his assistant coaches so well that he is no longer indispensable, allowing him to accept short-term coaching stints in countries that don't pose a direct threat to the Thai national team.

Being candid about his profession, the trainer admits that if he wasn't passionate enough to focus on leading the team to reach world recognition, he probably would have resigned years ago to make a name for himself in the private sector. Many of his friends today hold top posts in the corporate world and are raising families. His salary as full-time coach is paid by the state enterprise Aeronautical Radio of Thailand Ltd. (AeroThai).

At 183cm tall, his larger-than-life presence commands a mix of respect and awe from the women. He might work the team to a pulp during training, but afterwards they chill out and play around like friends and family members.

"Working with 18 women with varying personalities and mood swings is challenging," said Kiattipong, breaking into a huge grin.

"The girls go through various stages of physical and emotional change as they grow older.

"It is my responsibility to keep abreast of how to support them best during difficult moments. Having studied sports psychology, I find activities outside their training to keep them in good spirits." When Kiattipong says he works the team hard, he means it. His charges follow a regimental training schedule six days a week, with physically demanding work-outs that span at least six hours. Training activities are geared towards working as a unit, he said. To be able to wear the national colours, he has taught them to prove their mettle. "If you're not up to the task, don't bother to waste your time," he tells them.

While the players have self-discipline, they can be young and restless, making it important for him to guide them. His concern for their future made him spearhead efforts to open opportunities for them to play for volleyball clubs outside of Thailand in their off season.

Some of the athletes who have been with the national squad for a decade have saved 10 million baht. He said many had used part of their income to support their siblings through school, build houses for their parents and also began small businesses for relatives. He teaches them to spend their money wisely.

As Kiattipong is single, he spends most of his free time organising group activities for the team. They recently visited schools in Yala province, where they went for training in 2001. The group included both former and current national players.

"Everyone learned a lot from encountering the warm hospitality of the people of Yala," he said.

"The locals seemed overjoyed to be visited by the national women's team.

"While we should have been the ones to be offering encouragement to them, they in turn were the ones that made us feel so special for coming to visit them.

"The players were treated like celebrities, and made their day when they broke into small groups and taught the children volleyball techniques. We decided to visit them as often as possible... it was good feeling to be able to lift the spirits of people who have experienced such hardships."