Feast-on-the-fungi: Now is the time for rare termite mushrooms

The end of the rainy season is the only time this rare delicacy can be found in forested areas around mountains, and then only if you're lucky enough to beat out the hordes willing to pay top dollar for them

Most people like mushrooms because they think they're healthy and suitable for a wide variety of tasty dishes. These days the markets are full of mushrooms of all kinds, most of them always available and inexpensive. 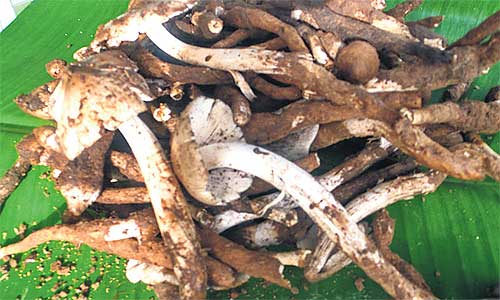 FUNGAL FUN: Above and Below termite mushrooms before and after washing 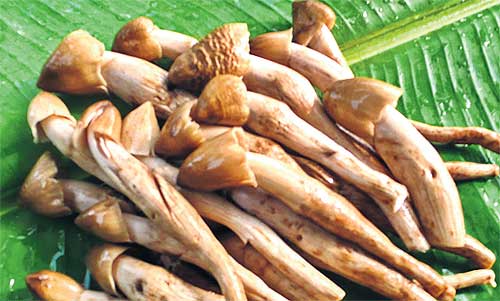 But there is one type of mushroom that Thais have been eating for a long time, and that many think is the most delicious of all, that isn't so easy to get hold of. Those who love it have to be patient, because it only appears once a year. It takes special knowledge to be able to gather them and those who do so usually aim to sell them because they fetch a high price. They are so rare that they are usually purchased as gifts for other people. In other words, the people who pick these mushrooms don't eat them and those who eat them don't pick them.

The mushrooms are het khone, or termite mushrooms. The best ones grow in forested areas around mountains in Kanchanaburi, Phetchaburi and Ratchaburi provinces and appear in October. During this month, villagers in Kanchanaburi become mushroom hunters, knowing that they can make a lot of money.

Once they have gathered some mushrooms, they just have to put them into plastic bags and hang them up in sheds along the side of the road. Even though there will be many of these sheds, and each one will display plenty of these bags, within an hour every mushroom will be gone. 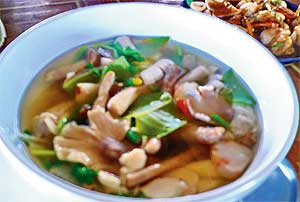 A MAGICAL MUSHROOM: ‘Tom yam’ made with termite mushrooms.

It is not common to see termite mushrooms being sold by the side of the road because they go quickly. Cars arriving from both directions park near the mushroom sellers' sheds, then their drivers climb out in a hurry and rush to the sheds to snatch bags of them, if they can. Those who are able to grab a bag hold it out to proclaims ownership and immediately ask the price, without even looking at the mushrooms to check size and quality.

Locals make use of special knowledge and techniques to collect these prized mushrooms. Since October comes towards the end of the rainy season it normally rains almost every day, but there can be intervals of two or three days when it doesn't rain at all, and the weather is hot and humid. This is called "mushroom heat", and it is usually followed by a night when it rains very hard.

When morning comes, villagers head out into the forest with torches, long, sharp-pointed knives and plastic bags. They look carefully at ground heavily littered with dead leaves and fallen branches, and underneath trees. Sometimes they will see the white caps of mushrooms pushing up from underneath, either in clusters or as individual plants.

In using the knife to dig them out they have to be careful in dislodging the mushrooms. It does not matter if soil adheres to them, but they should never be bruised. The hunting will continue until later in the morning when the harvesters figure there are no mushrooms left to find.

One thing that makes these mushrooms unique is that, as their name suggests, they are cultivated by termites by means of a complex natural process that takes place underground. Inside the nest there are three kinds of termites, each with its own duties. Some are involved in reproduction, some are workers and some are soldiers.

The breeding termites come first. When termites form a new nest the female will begin laying eggs and do nothing else. These hatch to produce worker termites, whose duty it is to provide food for the mushrooms, build walls to protect the nest, and dig ventilation holes and tunnels that allow the termite community to go out and find material for making food, which might include pieces of wood and dead leaves. Soldier termites, bigger and stronger than the others, guard the nest against enemies, which are mostly ants.

When the wood and other vegetable material that will be used to produce food is brought into the nest, the termites consume and digest it. Protozoa in their digestive tracks convert it to a type of cellulose that in turn becomes glucose, which is deposited into big piles. Certain spores then germinate to produce mushrooms, which are the true food of the nest's inhabitants and their queen.

When the nest becomes large enough, the termites leave to build a new one. This takes place during the rainy season, and it is then that the termites grow wings so that they can fly away to scout for a new location and to mate so that the new community can form.

When large numbers of termites leave the old nest the untended mushrooms inside sprout, and during the October days when the rain temporarily stops and the weather becomes hot and humid they grow especially fast. Then, when the rain returns and there is a heavy, all-night downpour, the mushrooms growing in the tunnels dug by the worker ants push through the softened structure of the nest and burst forth to become sweet, crunchy het khone.

When the mushrooms finally reach the kitchen, washing them can be tricky because of the soil that sticks to them. They have to be washed very thoroughly but gently, so that the stems don't break. Since some of the dirt can work its way into the skin under the cap, a soft toothbrush has to be used to get it out, again very carefully. Once they are completely clean, the are ready to be prepared for the table.

The important thing in cooking the mushrooms is to let their delicate flavour and texture come through fully. They shouldn't be used to make complicated recipes. Best of all is a simple tom yam without any kind of meat. Stir-frying them with shrimp or with a lot of seasonings is not a good idea because their flavour will be overwhelmed. If you get hold of a lot of termite mushrooms, boil them with some nam pla and then put the mushrooms together with the liquid into the freezer. They can be thawed and used to make tom yam for a future meal.

So if you happen to be enjoying a morning drive this month along a back road near the mountains in Kanchanaburi or Phetchaburi or Ratchaburi and happen to spot a rickety lean-to festooned with plastic bags full of termite mushrooms for sale, pull over and make a dash to buy some as quickly as you can.

Your reward will be a delicious and healthy meal featuring an ingredient that can only be found fresh once a year, and even then only if you are lucky.