Schools and parents are working themselves into a lather over students' hairstyles, but the barbers are the ones who could be facing a close shave

Everything about a barbershop is nostalgic: the buzzing-bee sound of a clipper, the fragrant scent of talcum, the cut-throat razor and rotating chair. For most Thai men, they evoke memories of their formative years, a place where as students they were given a proper (military-style, in certain cases) short haircut as required by their schools. 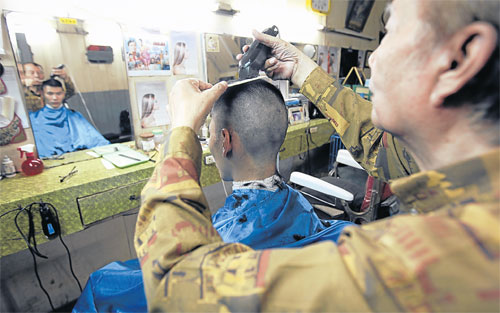 ‘‘I think students will continue to come here, even if they don’t need to have a very close-cropped style any more,’’ says Mohammad Sangsri, barber on Charoen Krung Road.

Failure to do so meant some form of punishment awaited them.

When the Ministry of Education announced last week that close-cropped hair is no longer compulsory _ ending more than 30 years of what many see as a violation of human rights and others see as a necessary means of control _ the student reaction was mixed. Barbers, on the other hand, started to wonder if they would continue to play the same role.

Mohammad Sangsri, from Mad Barber on Charoen Krung Road, is expecting the new rule to only slightly affect his career. He says barbershops are considered affordable and students will still need a haircut at least once a month, even though demand for ultra-short hairstyles will drop.

Mohammad, 78, has been a barber since he was 18. His non-air-conditioned premises is a sanctuary of old-school charm frequented by students from many nearby institutions.

"My concern is the cleanliness," he says. "Young boys don't pay much attention to themselves, and having a short haircut makes it easier for them to take care of their hair. I think students will continue to come here, even if they don't need to have a very close-cropped style any more."

Sumit Kaewkoi from Chic Studio on Lat Phrao, a modern salon, believes that shops like his may benefit from the repeal of the old rule. Right now, Sumit serves mainly office workers, but he hopes more students will consider using his services now that they have more freedom to wear their hair longer.

The issue of students' hairstyles has been in the news since late last year. There was criticism that the code, which has been regulated for decades, is a form of institutionalised dictatorship, and children should be able to choose their own hairstyle.

Nutchapon Boonkumned, 13, voices a common sentiment: "I disagree with this rule and don't understand why it must be only short hair for high school students. I think my hair is too short and I really don't like it."

For state-run schools, boys are required to wear crew cuts no longer than 5cm and female students can have hair no longer than their earlobes (see box). This controversial regulation was implemented in 1972.

Last Friday, the day before National's Children Day, Education Minister Phongthep Thepkanchana ordered that all schools should allow male students to have long hair that looks neat and clean-cut. Female students can also choose to have short or long hair.

The minister revealed that many schools were still complying with the 1972 regulations, which stipulated very short hair. But in fact the regulations were modified in 1975 to allow male students to have slightly longer hair. Therefore, schools should follow the latest version that gives students the option of longer, but still neat, hair.

The next barrier to cross, then, is the student uniform: Thailand remains one of the few countries in the world with compulsory school uniforms and _ until last week _ a rigid hair code. If some people believe that a haircut has nothing to do with the student's academic performance, then the same logic can be applied to the uniform. Others, however, believe short hair has long been a part of Thai identity, and so has the uniform, and therefore shouldn't be done away with.

"I am content with the old and new rules," says 16-year-old Wachirawit Songput. "However, I believe that the rule about hair and uniforms should remain as it's always been. It makes the students look clean and neat and creates unity within schools. Not everything needs to be changed." 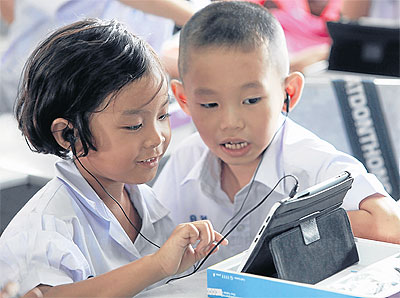 Two young pupils at Don Thong School in Chachoengsao. The krian and ting hairstyles pictured here are no longer mandatory.

The end of krian and ting

Apart from influencing the stress levels in children on inspection day, the student hairdo has also influenced the Thai lexicon. Two of the most popularly used slang words in the past few years were inspired by the features of the (now no longer) mandatory hairstyle: krian and ting.

Krian is a descriptive term for a very short crew cut on male students, while ting is short for ting hoo, meaning earlobe, referring to the regulation that female students could wear their hair to that length and not a millimetre longer.

In the vernacular, krian has been used to refer to childish, foolish, provocative or pain-in-the-neck behaviour _ and certainly it was derived from the belief that young people have a tendency to ask for trouble. For example: "Don't be so krian, those tough guys will beat you up." A recent Thai film is titled Song Krian Pai Rian Phut _ literally, "send a krian boy to study Buddhism" _ is about a teenager's soul-searching trip to India.

The female equivalent, ting, has increasingly acquired a slightly contemptuous air. It's often used to refer to young schoolgirl groupies of South Korean boy bands who show up en masse to scream at them whenever they come to Thailand.

For instance: "Let's not go to the mall today, a Korean band is performing there, the place will be crawling with ting." In general, it can be used to describe someone who behaves frivolously.

But now that krian and ting haircuts are no longer mandatory, will the words maintain their linguistic edge? Will their social relevance become a thing of the past now that kids can wear Bon Jovi hair to school?

The history of krian and ting didn't start in school, however.

According to an article by historian and scholar Nithi Eawsriwong, the very short haircut of students today dates back to World War II. During the war, there was a serious outbreak of lice among Thais, and the short haircut was used as a way to stop the epidemic.

While schoolchildren are now free from the long-standing regulation, high school boys who join the territorial defence training will have to keep their hair closely cropped as required by the military.

Usually each school has its own punishments when students fail to keep their hair up to standard. Some only give students a warning, while in others teachers snip part of their hair as a punishment, so that they will need to have a haircut later. The hair police, like the slang words, may now face extinction.

Throughout the years of regulation, teenage boys and girls have been acting their age: trying to break the rules. In the case of female students, many stylise their haircut in such a way that they can wear it freely after school, but keep it tidy enough to pass the checking. For boys it was rather harder to make a difference. Back in 1994, the Hollywood action-thriller Speed starred Keanu Reeves sporting a razor-sharp short haircut, a style which immediately became fashionable among teenage boys during the late 90s. For a period, boys didn't seem to see the krian hairstyle as embarrassing or uncool.

During the past several years, the trend for male students has been to have the sides of the head cropped short but leaving the top in a funnel shape, like a short version of a Mohawk.

Teenagers skirting a rule like that perfectly exemplifies the meaning of the now-endangered word krian.