In search of the perfect papaya
Life
Social & Lifestyle

In search of the perfect papaya

Bad farming practices have all but eradicated once-favoured varieties, but some farmers understand their importance and value, and go to special lengths to ensure their survival

For most Thais, mention of the word "papaya" usually summons up thoughts of som tam, but the significance of this common fruit isn't limited to its role as the chief ingredients in that sour and spicy salad. It has many other uses, some with deep roots in traditional Thai culture.

The papaya came to Thailand during the Middle Ayutthaya Period, about 300 years ago. During the centuries since it has been used in many aspects of Thai life. The branches, leaves and roots were once used medicinally. Swelling, for example, was treated by pounding the leaves with liquor and then spreading the mixture over the swollen area. The white sap was applied to bites or stings from poisonous insects, and the long leaf stems were used as breathing tubes for use when it was necessary to go under water for some reason, to catch fish, for example, or to hide during wartime combat (the shape of the end of the stalk fit the mouth perfectly).

One object that shows a way in which the papaya tree was used in the past is a very thin writing tablet, one foot across and two feet long, that was coated with resin from a native milkweed and coloured a shiny black, with an elaborately ornamented frame. It was used by King Rama IV to write down calculations connected with the astrological calendar. The tablet was made from papaya wood, and its lightness and handy size made it convenient to hold. Its dimensions show that papaya trees of a remarkably large size once grew in Thailand.

Papaya fruits can be eaten when either unripe or mature. In the central region of Thailand, especially, the pulp of the unripe fruit is used to make dishes such as kaeng som (a soup-like curry) or kaeng khua pla haeng (a thicker curry made with dried fish). In the South, it goes into the fiery soup called kaeng lueang malako dip that is widely popular. 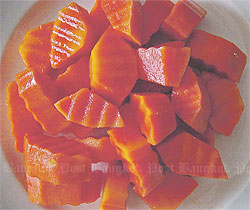 THE REAL DEAL: An original ‘Khaek Dam’ papaya should have a bright red-orange skin.

When the fruit begins to ripen and its pulp starts to change from green to yellow, cooks in the central region use it to make an old-fashioned version of som tam native to the region. They add tiny dried shrimp and coarse-pounded peanuts, and the finished dish is quite sweet. It is eaten as a snack together with khao man _ rice that has been cooked with coconut cream and a little salt _ and some tender leaves of the type called bai thong lang in Thai.

In the past, Thais liked to eat the fully ripe fruit after the evening meal because of the belief that it had healthy laxative properties. The trees were planted next to the house, and were easy to grow. When a ripe papaya had been eaten, the seeds were thrown in the area where the trees were grown. They would sprout when they were watered or were shaded by other fruit trees like bananas or limes. Central region households always had them in the garden. In those days there were no specific names for different strains of papaya, or they were referred to as regional varieties.

Today, a papaya dish that has attained explosive popularity is Isan-style som tam. It has become so ubiquitous that it ranks as a Thai national dish, and has forced old-fashioned central Thai-style som tam to retreat and hide in a dark corner of the kitchen.

More recently, different varieties of papaya have being arranged into categories, with agricultural specialists at government offices and universities giving them names such as khaek dam, coco and nam phueng. The type used to make som tam is the Khaek Dam, because it can be grown anywhere. (In Isan it is known as khaek dam khrang). But this variety is vulnerable to a virus that can destroy it. When the virus attacks an orchard or a province where papayas are grown, every tree will die.

In response, government scientists explored and recruited foreign technology to create a genetically modified version of the khaek dam papaya, and now most of the fruits available in markets are genetically modified. Unfortunately, although they are cheap, their bland, unappealing taste keeps them out of the running as a fruit to be eaten ripe.

Some years back the Holland papaya, up from Malaysia, came to the rescue. It is meant to be eaten ripe, and when Thais first tasted it, the delicious flavour so impressed them that it caught on quickly despite its comparatively high price. The Holland papaya became popular with farmers, too, because it produced a lot of fruit, was virus-resistant and fetched a good price.

Soon it was being grown nationwide, and this abundance led to trends that shortened its life as a viable product. Farmers did not protect the strain properly and exercised no quality control. They grew it together with other varieties, so that they intermixed. When they sent the fruit to market they often ripened them artificially with gas, so that the skin looked attractive but the pulp was mushy and bland. These developments brought the rising career of the Holland papaya in Thailand to an end. Today the markets offer genetically modified khaek dam that people do not like to eat ripe, and the Holland papaya, whose future is dark.

Fortunately there is a papaya farmer, Prung Pomkoed, who grows khaek dam fruit especially to be eaten ripe. His farm is on Salaya Road on the way to Nakhon Chaisi and Nakhon Pathom.

Mr Prung grows and carefully preserves the original, unmodified khaek dam strain, and the fruit he grows is sweet and fragrant. He has his own method of protecting them against viruses. If a viral infection appears, he destroys every tree in the entire plot, treats the soil, and grows a complete new crop. It takes the new trees eight months before they start bearing fruit, but even though he loses income, Mr Prung feels it is worth it for the high quality of the fruit. As a result, his papayas have been famous for more than 10 years.

He makes the rounds daily, checking each tree. If he notices anything unusual he chops the tree down and immediately burns it before the disease can spread. The importance of activities like this is one of the reasons why farmers have to do things for themselves and not entrust them to assistants who might not be so careful. He also uses seeds from his own farm, saving the ones from the trees that produce the most perfect fruit.

A new crop of papayas has just been harvested on Mr Prung's farm. He has not offered any of his fruit for sale outside of the farm since the flooding last year. Middlemen go to the farm to buy them and then take them to sell. Since his papayas are known for their quality and there are not many of them, they go for very high prices when sold in supermarkets. Mr Prung himself does not care about the prices they bring outside. When someone comes to his orchard to buy them, he sells the fruit for the same price he charges the middlemen.

I am recommending the papayas from Mr Prung's trees to spread the word that real, original khaek dam fruit still exist, and should still be with us for some time into the future. I also want to point out that farmers such as Mr Prung, who are idealistic, self-reliant and able to devise methods of their own for dealing with viruses and other obstacles can still be found.