It's about blooming time!: Philippine orchid finally gets its due
Life
Social & Lifestyle

It's about blooming time!: Philippine orchid finally gets its due

The sampaguita (Jasminum sambak), is a flower close to the hearts of most Filipinos and now shares the designation of national flower of the Philippines with an orchid, the waling-waling (Euanthe sanderiana, also known as Vanda sanderiana). The bill was approved by the Philippine Senate last month in a move that was long overdue. Considered the "queen" of Philippine flowers, this indigenous orchid species used to be found in abundance in the dipterocarp forests of Davao, Cotabato and Zamboanga in Mindanao, southern Philippines, but is now on the brink of extinction in its natural habitat due to over-exploitation and destruction of forests. 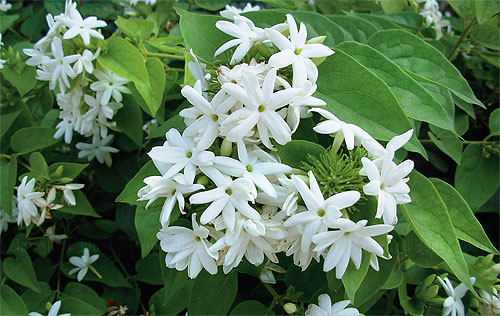 as fragrant as its cousins, the star jasmine is a prolific bloomer.

The waling-waling was first discovered in the early 1880s, but it was the sampaguita, which originated from India, that was originally named the national flower in 1934, when the Philippines was under American rule. This is understandable, as not everyone could grow the waling-waling, but the naturalised sampaguita could be found throughout the Philippines.

Known among Thais as mali, the sampaguita or jasmine is one of the first flowers I had known as a child. My Auntie Saling was a keen gardener and it was among the flowering plants she grew in our family compound. I grew up picking sampaguita, butterfly lily, gardenia and ixora from the shrubs my aunt grew, and these flowers are among my favourites to this day as they bring back memories of my early childhood. 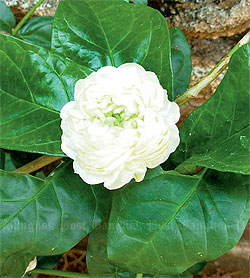 Arabian jasmine is the symbol of Mother’s Day in Thailand.

My aunt also grew a few wild orchids, which she attached to tree trunks. They were all of the same species, and she called them waling-waling, but I later learned they belong to a different genus. Indigenous to Northern Luzon, I am more familiar with this type of orchid, and I have a special place in my heart for it. Known as sanggumay (Dendrobium anosmum), it is very fragrant and flowers profusely nearly every year.

Originally growing wild from Persia, now known as Iran, to Kashmir in India, the common variety of jasmine with single petals was brought to the Philippines, Thailand and the rest of tropical Asia from northern India through southwestern China. While my aunt grew this common variety, my cousin Sofia, who was as keen a gardener as our aunt, grew the one with the common name Arabian jasmine, which has double petals. Both are equally fragrant, but the single variety bears more flowers nearly all year round.

In Thailand the Arabian jasmine, known as mali sorn, is the symbol of Mother's Day, as the white and fragrant flower represents the pure love that only a mother can give. The single variety is used to lend an aroma to the summer favourite, khao chae, or to the coconut milk and sugar palm concoction used to lace some Thai desserts, like lod chong. Dried flowers mixed with tea gives the drink a jasmine flavour.

When I was a child my Aunt Sally took a needle and thread and showed me how to string the flowers into a garland. Jasmine is made into garlands for use as floral offerings to religious images in the Christian-dominant Philippines, or to welcome dignitaries. In Thailand, politicians are given garlands made of marigold; in the Philippines popular politicians wear jasmine garlands. Jasmine sells well during graduation time in April, as it is a custom for relatives and friends to congratulate a graduate by putting a jasmine garland around the student's neck. 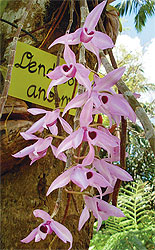 the sanggumay is sometimes mistaken for the waling-waling. They belong to different genera.

In Thailand, another popular species is Jasminum multiflorum, or star jasmine, or mali puang in Thai. As fragrant as its cousins, it is a prolific bloomer. Both Jasminum sambac and Jasminum multiflorum are vines about two metres tall and can be made to climb small trellises or planted along fences, but they can be controlled and pruned as shrubs. Plant them near the house, where the lush green leaves provide a welcome respite for the eyes and the white flowers lend a gentle fragrance to the air when they open in the early morning. A friend has the former in her yard and her husband has made it a habit to pick a handful of the flowers every morning and lay it on her breakfast table, a ritual that undoubtedly has helped make their relationship remain strong through the years.

Both species of jasmine are happiest when grown in the ground rather than in a pot, in soil enriched with compost and decomposed animal manure, and where they get plenty of sun. Keep the soil moist but not soggy. If the only option is growing them in a pot on the rooftop, make sure to grow several plants together to provide humidity, and water the plants every day. Water preferably in the early morning before it's too hot, as watering in the evening sometimes makes plants susceptible to fungal disease. And make sure your jasmine does not outgrow its pot.

All plants benefit from a fertiliser high in nitrogen in the early stages of growth and development, or you may use a complete fertiliser. However, if your plants are robust with plenty of dark green leaves but no flowers, switch to a fertiliser rich in phosphorus, like NPK 12-24-12, or its equivalent (any fertiliser with the middle number higher than the other two).

a species introduced from India, the sampaguita, a species of jasmine, has been the Philippine national flower since 1934.