Not for sale
Life
Social & Lifestyle

Living in the neighbourhood of Mae Lao in Chiang Rai province where a number of girls and boys have been trafficked from, Nat* has no idea she herself is also at a very high risk of becoming part of the human market. 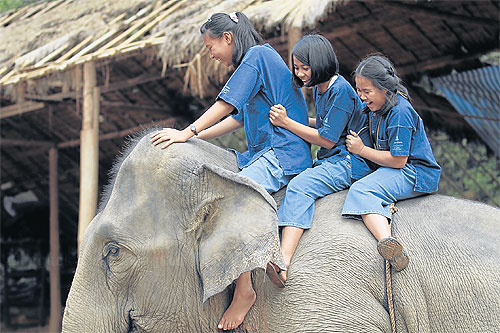 Mahout training is part of Elephants For Kids, a charity project by The Sold Project in collaboration with the Golden Triangle Elephant Foundation to empower and education children at risk of becoming victims of human trafficking.

"I would probably go to work elsewhere just like many of my peers if there was a job opportunity which promises good pay," said Nat, a 14-year-old student who was born and raised in the area.

Nat is now being convinced to move for a job by Fon*, her older friend who left the village many years ago after she was sold to a businessman in Chiang Rai, presumably to work in the sex trade.

Fon recently returned to Mae Lao and has established herself as a mamasan (manager of sex workers).

Fon has attempted to persuade a lot of girls in the community to work in other places. Many, unfortunately, accepted the offer and left their hometown. Only some returned with a wish to resume their education.

While Nat would perhaps yield to Fon's job proposal if it meant good gains, Dao* _ another girl in the area _ insisted she would never leave her hometown if someone offers her an obscure job opportunity.

"If someone approached me and asked whether I would be interested in going to work in other places, I would assume he or she is a human trafficker because there are a lot of them here," explained Dao, a 15-year-old who lost her parents several years ago.

Fortunately, Nat and Dao have not fallen victim to human trafficking, thanks to the close-knit community and people around them who have provided them with advice and guidelines regarding how to live through their teen years and to say no to offers. The two girls are among 150 students in Mae Lao district who have received academic scholarships from The Sold Project, a charity programme initiated in 2007 with the aim of preventing child prostitution and lowering the chances of girls and boys becoming victims of human trafficking.

"Academic scholarships are just a passport to get us in touch with kids in the area who are at risk of being traded," said Tawee Donchai, one of the project's founders. "After we give them school funds, we get to know them, and at the same time we get to know their problems.

"Some children lost their parents when they were young and were left with other family members. Many live in impoverished families with very low income and thus education is not the family's priority.

"Scholarships are to keep them in school so they receive standard education, and at the same time it keeps us connected with them so that we know what kind of risks these kids are running into."

The Sold Project was started by a group of people _ American and Thai _ who were interested in producing a documentary about human trafficking. During the production, the team decided to provide a scholarship to one kid who had a high chance of being trafficked.

Besides academic scholarships, Tawee added, The Sold Project also set up educational and recreational activities as well as provided counselling for children based on local tradition and culture.

Recently, the project has been working in collaboration with the Golden Triangle Elephant Foundation in engaging kids in a mahout training programme as a way to not just empower, but also to educate them about nature conservation.

"We call it Elephants For Kids," said John Roberts, director of elephants and conservation activities, Anantara Golden Triangle. "In this area, there are quite a lot of problems with girls and boys being sold down to Bangkok. Then they were rescued from Bangkok and came here and the idea was initially to give them a bit of a day out to play with elephants and enjoy themselves."

From an idea to give kids a pleasant day after their horrible experiences of exploitation, the project has been developed into an educational one, thanks to Elephant International, which has done some research and come up with a curriculum. The project involves mahout training in which children learn how to use verbal commands with elephants, how to feed and bathe them, the role of mahouts and the connections between them and the elephants, as well as lessons on the importance of preserving forests.

According to Tawee, bringing children close to the world's largest land mammals is more than just giving them a fun-filled day out.

''It empowers them,'' Tawee said. ''It gives them strength and confidence. At first, the kids were so scared of elephants. They did not even dare touch them.

''But now they have got to know each other better. In a way, such experiences with elephants alleviate their stress, which is perhaps caused by society, family and so forth. After the kids return from the elephant camp, they talk about elephants and about many things they enjoy. They become more extroverted.'' Dao admitted she found elephants very frightening at first. But now she feels they are one of the most beautiful animals she has ever encountered.

''I bathe them and speak to them. And they understand our language,'' Dao said. ''Being with elephants gives me more courage and confidence. I think I feel stronger.''

Elephants For Kids, added Roberts, has also changed children's perspectives towards many aspects in life.

''Kids come and see our research assistance, our female staff _ some are PhD candidates and masters candidates. These are very bright ladies. This gives the girls a chance to see there are other job options. With education and with perseverance, you can go a long way.''

Roberts strongly believes that the project, in the long run, will also benefit the elephants themselves, as well as the Thai eco system.

''Elephants are the lungs of the planet and wild elephants are important. They play a very crucial role in making sure of the right mix of trees by the moving of seeds from one place to another so that young trees can grow.

''Other animals and organisms rely on the service that elephants provide to the ecosystem.

After several sessions of mahout training, as well as other empowering activities, Dao now sees the value in herself. With her brave smile, she promises she would never give the nod when someone asks her to leave her community and work elsewhere.

''When girls leave the area, we know they are involved in the sex trade,'' said Dao. ''And when they come back, they earn so much money that they can build a new house for their parents. It sounds good, but in reality, the truth behind that might not be as beautiful as it looks.

''Those who are in the sex market are at risk of diseases and infections and this is a threat to their life. So the most important thing is for ourselves _ girls and boys _ to respect ourselves and to be strong, confident and courageous enough to say no, regardless of how tempting the job offer may appear. And this way we can protect ourselves from being trafficked.'' 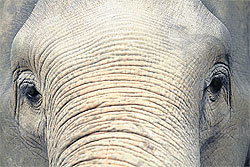