For beauty and variety, it's fern, baby fern

Some plants are grown because they have beautiful flowers, yet there are plants which are treasured even when they never bloom. Ferns belong to the latter category; plant fanciers love them because they are decorative, add freshness to their surroundings, and give a feeling of coolness even during the height of summer. Thailand has more than 700 species of fern, which come in many different forms, so you never run out of new ones to add to your collection. What's more, some ferns form mutations that can at times bear little or no resemblance to the mother plant, which adds to the excitement of growing them. 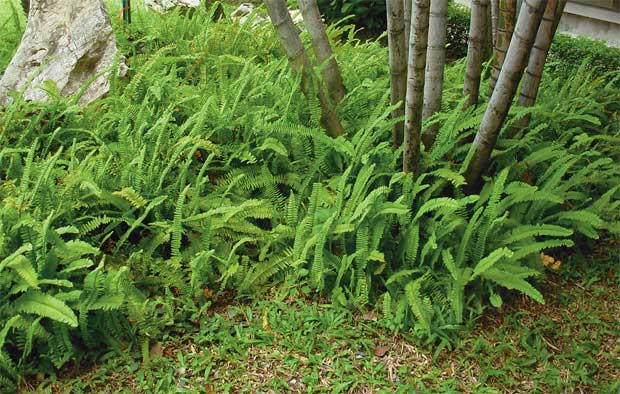 Bird's nest ferns are a familiar sight along Rama IV and Surawong roads, where they can be seen attached to tree trunks. They are among a group of ferns that can easily adapt to conditions in the city, but if they are attached to trees the ideal place for them is dappled shade, where the sun is filtered through the tree's canopy. Attaching them to the trunks of small trees along streets, where they are exposed to full sun, fumes from passing cars and heat emanating from the pavement, leaves these natives of tropical forests in a sorry state, especially in the summer. 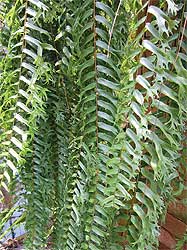 FISH TAIL FERN: This variation of ‘Nephrolepis biserrata’ has forked pinna, or leaflets, like a fish tail, hence its common name.

Other ferns that can be easily grown in gardens are those in the genus Nephrolepis, commonly known as Boston ferns, fishtail or lobster claw ferns, and sword ferns. In Thai they are generally known as fern bai makham because their pinnate leaves resemble those of the tamarind tree, which is called makham in Thai. They can be seen in the wild growing in a variety of habitats, from shade to full sun and as terrestrials and epiphytes. Carried by the wind, their spores germinate easily on oil palm trunks, which host a wide variety of Nephrolepis ferns.

In gardens, they can be used in a variety of ways. Nephrolepis cordifolia, or sword fern, is often used in landscaping as ground cover, planted under trees and around palms. In its natural habitat it can be found in shade as well as in full sun, and grows on soil, among rocks and as an epiphyte, thus it can be planted in the ground as well as in pots. Its cut leaves make an attractive accompaniment to flowers in vases or floral arrangements.

Nephrolepis biserrata and Nephrolepis falcata are valued for their strongly weeping, or long, fronds and for producing mutations that sometimes look very different from the mother plant. Both have variations with forked pinna, or leaflets, like a fish tail, which gave them the name fern kang pla (fish tail fern). This form of Nephrolepis biserrata is also known in Thai as fern garm poo (lobster claw fern). They look best when planted in hanging baskets, but they can be planted in pots and put on the ground. However, you have to put the pots on stands, such as another pot turned upside down, so that the flowing leaves are above the ground. 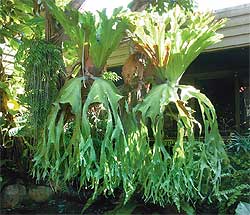 Nephrolepis ferns are the easiest to grow ferns. They prefer loose soils with good drainage, so for those planted in the ground, mix the soil with lots of compost. Those in pots and hanging baskets can be planted in chopped coconut husk. Unlike many ferns, Nephrolepis can last long in a pot-bound condition provided they are watered regularly and fertilised occasionally. For my ferns I apply about a spoonful of slow-release fertiliser every three months.

Ferns in general like bright light but not direct sun and Nephrolepis ferns are no exception. Although some species tolerate full sun, their leaves are not as green as those in the shade or where the sun is filtered by tree canopies. Ferns are seldom attacked by pests or diseases, and are propagated by spores or by division.

Another favourite among fern fanciers are those in the genus Platycerium, better known in Thai as kao kuang or chai pha sida. In their natural habitat, ferns of this group grow on cliff faces or large trees, and can be found in habitats ranging from humid rainforests to dry deciduous forests. Staghorn ferns are spectacular because of their size, and are distinguished by the shape of their fertile fronds, which look very much like a stag's antlers.

VERSATILE : Right, ‘Nephrolepis’ can be planted in pots, baskets or in the ground.

Staghorn ferns have two kinds of fronds, one growing upwards and the other limply pendulous.

They are best grown attached to a tree where there is high humidity and plenty of light, but not direct sunlight. To attach it to the tree, tie the plant in place with coconut husk on its base. They can also be grown in hanging baskets or attached to wood slabs and hung where there is filtered light. Water regularly as with the Nephrolepis ferns, and fertilise occasionally with liquid fertiliser.