On screen and off, He cuts both ways
Life
Social & Lifestyle

On screen and off, He cuts both ways

Theerachai Wimolchaireuk, better known as Toni Rakkaen, is a celebrity stylist to the stars and he takes his day job into his latest movie playing a starcrossed barber looking for 'Love in the Rain'

published : 5 May 2013 at 00:00
newspaper section: B Magazine
writer: Pattramon Sukprasert

You could say he was cut out for the role. Theerachai Wimolchaireuk, better known as Toni Rakkaen, is a hair stylist to the stars, so when Worrawech "Dan" Danuwong approached him about playing one in Love in the Rain, he had no qualms about bringing his scissors to the big screen. 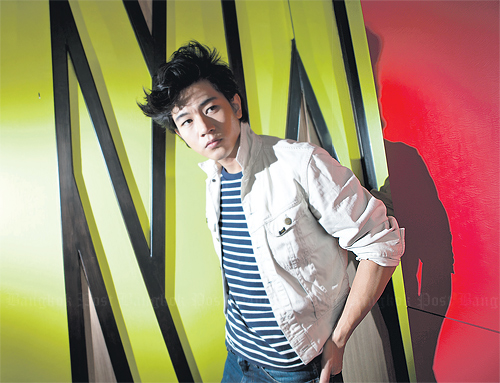 In the romantic comedy which opens on Thursday, Toni plays Daisy (the feminine sounding name is not reflected in the character), a hair stylist caught up in the kind of messy romantic scenario familiar to the genre. Daisy is in love with a woman who does not feel the same way, while another woman's love for Toni's character goes unrequited.

Most of the film takes place in the pouring rain, highlighting the director's view that downpours intensify emotions, both feelings of joy and sadness.

The trials of love and romance, he feels, are particularly poignant amid a downpour.

Despite the fickle nature of love, Toni's character Daisy manages to maintain an air of optimism, even as those around him get depressed.

"What Dan wanted to convey is that people sometimes feel incredibly lonely, but being sad is not the only option. You can work through grief and learn to smile."

Toni says the role of Daisy was "tailor-made" for him and he means that literally _ the writer/director based the character on Toni. The actor was taken aback at first by the character, who is outgoing and makes "goo goo eyes" at customers. Toni did not see himself in that light.

"I've always thought of myself as calm and quiet, but I guess when I'm with friends other sides of my personality might come out and Dan saw that," Toni says, laughing.

That Toni and Daisy share a profession made it easier for him to focus on the character's emotional side and interactions with other actors. "Hair-styling comes naturally to me so I could fully focus on other parts of the scenes," he says.

Toni came to fame through an unusual route. He was born into the arts _ his mother, Banyen Rakkaen, is a legend in the mor lam world and he says throughout his life he would enjoy expressing himself through drawing, music, acting and, yes, hairstyling.

When he was 12 years old, Toni moved to Australia with his two older sisters. "I had so much freedom then I could pretty much do anything I wanted but I could get out of hand pretty easily."

Toni says he skipped class frequently, but made an exception for classes that interested him, such as photography, graphic design or any other art class available to him.

"I started doing freehand drawing in the manga style of comics like Dragon Ball and Slam Dunk," he says. "I felt like I was getting pretty good at it, then I began doing more advanced drawings of things like cars and portraits."

His flair for drawing caught the attention of teachers at the school who assigned him to do some art projects for the school, such as wall displays and a yearbook cover. "It was lucky for me that the teachers recognised my ability in arts and supported me even though I misbehaved a lot," he says.

Toni then studied at the Royal Melbourne Institute of Technology, further honing his skills in graphic arts, but again found the temptation to play too difficult to resist.

''By that time my sisters had already graduated from university, so I had even more freedom. I enjoyed hitting the casino too much and spending my mum's money there.'' he says. ''It was then I realised I needed to get a job.''

After a brief stint as a waiter, Toni then took a job at a hair salon. He couldn't style hair yet because he lacked a certificate, but by assisting the other stylists at the salon he says he picked up lessons that remain with him to this day.

''Hair dressing to me was just another art form, so I was able to pick it up easily.''

Toni experimented styling his friends' hair and eventually moved to another salon where he was allowed to take on customers.

''At that time, I would have never thought about doing this as my actual job. I just thought it would be a fun part-time job, but doing work that is creative has always been my dream.''

He had just returned from Australia and was doing an internship at the Leo Burnett advertising agency. He was his office's representative in the 2008 Cleo 50 Most Eligible Bachelors contest and won the award for the ''most touchable hair''.

That led to several modelling gigs which he still does to this day and it was his appearance in one magazine that brought him to the attention of former Miss Thailand World Methinee Kingpayome and Somporn Tirin, founder of The Lounge Hair Salon.

''The article referred to my experience at a hair salon in Australia and also that I'm a son of Banyen Rakkaen,'' Toni says. ''They asked me if I'd be interested in working with them. Lookkade's [Metinee] beauty was irresistible so I automatically consented.''

In addition to his salon duties, Toni has maintained a busy schedule as a model, actor and singer. Remaining constantly creative regardless of the particular pursuit, he says, is what drives him.

For someone who has found himself in the spotlight in a wide variety of pursuits, Toni says he does not find it easy to open himself up to the public.

''I usually put up blocks before strangers and unfamiliar places. I feel awkward when facing new things,'' he said.

Back in Australia, Toni says, he and his family moved frequently and it was awkward for him to constantly be meeting new people while still self-conscious about his English fluency. He became worried that people were judging him.

''I prefer to be an observer, to see how the world is, and then I can adapt.''

Toni says in Australia his sisters were interested in their own pursuits, leaving him to spend a lot of time on his own. ''I became used to living on my own. My sisters were in their girly world, so I preferred spending time playing games, practising on my guitar and drawing.''

That tendency to put up barriers has been tested continuously since Toni took the job at The Salon and began to rub shoulders with showbiz types, most of whom are anything but introverted.

''I'm so happy to be surrounded by them. I've learned how to be comfortable around them,'' he says. ''It's a piece of cake _ I just need to be more open and enjoy whatever I'm doing right in the moment.''

Toni's first film role came in 2010's Big Boy. The part was an ardurous one for the rookie actor; not only did he need to learn the basics of film acting, but he also had to learn B-Boy dancing despite having no background in creative movement.

After that initial success, he followed up with three romantic comedies _ Sud Ket Saled Ped, Sor Kor Sor Sweety and Valentine Sweety _ and a horror film, 3AM.

Despite seeming to fit naturally in romantic comedies, Toni says he doesn't want to be typecast and he approaches all of his films as if they are dramas.

While he's also appeared in TV dramas and stage plays, Toni says he is most at home with films.

''Movies come the most naturally,'' he says. The over-acting common in TV dramas makes him uncomfortable. ''I need to push myself very hard to get in touch with a character's emotions.''

Not surprisingly given his roots, Toni is also passionate about music. He has released two singles, both from the sound-track of Big Boy and says music has been a part of his life since his days playing guitar in Australia.

''I love playing guitar but I don't think I would enjoy being a professional singer because I found it tough to do those two singles,'' he says. ''But I do love music; songs play in my head all the time. Even if I don't have a stereo, just give me a guitar and I'll be able to run through my own playlist.''

As for what's next, Toni says he would like to go in the opposite direction from Love in the Rain and play a character completely unlike himself. And he's also looking to tell a story of his own.

''I've got a story in mind that I thought could be a movie, it's about a part of my life. I told Dan about it and he loved it and said, 'Start writing!' I did, but haven't gone back to it for a while as I don't really have the time.''

Amid all of his showbiz success, one wonders what it will take for Toni to put down the teasing comb once and for all. ''I love being a hairstylist. Acting, or even doing an interview, requires me to push myself really hard to get out there,'' he says. ''But when I'm cutting someone's hair, I reach a point where I'm totally relaxed and calm and that comforts me.''