After spying a version of 'Cassia fistula' national flower with snowy petals tinged with yellow, Normita Thongtham is finally satisfied that reports of the mutant strain of this beautiful and healthful plant are genuine

published : 5 May 2013 at 00:00
newspaper section: B Magazine
writer: Normita Thongtham

I don't remember now if I read or heard from someone many years ago that Cassia fistula, known in Thai as ratchapruek, has a mutant strain with white flowers. Cassia fistula is the Thai national tree and produces the national flower and is a familiar sight along Bangkok's streets and provincial roads, as well as in public parks and private gardens throughout the country. However despite how ubiquitous the tree, is until recently I had never seen one with white flowers. Once, passing through Lop Buri while travelling to Phetchabun, I saw a tree whose flowers were a few shades lighter than most, but they were still yellow, not white. 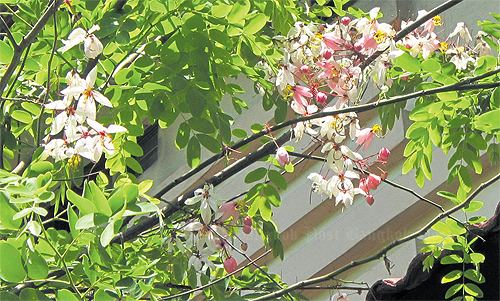 MIXED PARENTAGE: Crosses between ‘Cassia fistula’ and ‘Cassia bakeriana’ have flowers with features from both trees.

Cassia fistula as we know it has long strands of bright yellow flowers which become golden as they mature, giving it the common name "golden shower". The trees are most spectacular in the summer when their leafless branches are festooned by flowers, which begin to appear as the last of the leaves are shedding in March, and continue to bloom until new leaves develop in May. Juvenile trees do not shed their leaves, but their yellow flowers stand out and look even brighter with the shiny, light green leaves in the background.

Come to think of it, to my knowledge the claim that there is a white Cassia fistula had never been substantiated. All the books that I have show only yellow flowers. But then all the books that I have also show Delonix regia, or flame tree, with only scarlet flowers, when actually there are trees whose flowers come in other hues, such as yellow-orange and light orange. I have seen a number of these trees along the highway from Phetchabun town to Lomsak; unfortunately these were cut down when the road was widened about five years ago. These uncommon flame trees were said to have originated in Phu Kradung National Park in neighbouring Loei province. 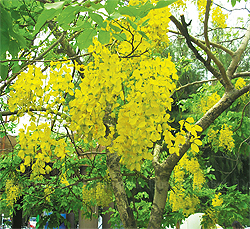 The name Tabebuia rosea, or chompoo panthip, indicates the colour of the tree's flower, which is purplish pink. As the flowers mature they take on a lighter hue, but there's a mutant tree in Suphan Buri whose flowers are altogether white. A mutant is an organism, in this case a plant, which is affected by a sudden random change in its genetic material that may cause it, and all cells derived from it, to differ in appearance or behaviour from the normal type. Mutation seldom occurs naturally, hence gardeners who find a mutant plant in their garden regard themselves very lucky indeed. As the ultimate source of genetic variation, mutation is essential for evolution, the process in which one species evolves into another.

The golden shower with white flowers remained elusive, and I had lost hope of ever seeing one. But a couple of weeks ago I was fetching my grandson from school when my attention was drawn by a tree which was literally covered by flowers in the school grounds. From afar I thought it was Cassia bakeriana, known in Thai as kanlapapruek, and I had arrived early so there was plenty of time to take a closer look at the tree. As I walked nearer I realised it was a different tree. Cassia bakeriana has pink flowers borne along the stems; this one was white tinged with yellow and came in strands that hang from the branches, like Cassia fistula.

Except for their colour, the flowers _ and the leaves _ were those of Cassia fistula. Could this be the mutant golden shower that I had been longing to see for a long time? The flowers were bigger than the ordinary golden shower, the buds were tinged with yellow, and only the fully open flowers were white. Imagine my excitement when a label on the tree confirmed that it was indeed Cassia fistula. The label also listed in Thai the tree's medicinal properties, which were no different from those of ordinary trees. 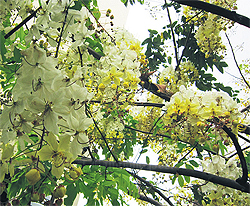 Traditional healers use the golden shower as a remedy for various ailments. Its fruit serves as a laxative, while its roots are used as an oedema, and for the treatment of gangrenous wounds, ringworm, joint pain and swelling, diarrhoea and haematosis, or formation of blood cells in certain parts of the body. The bark is used to enhance appetite, as well as for the treatment of the bacterial skin disease yaws, abdominal pain and contusion, and as a blood tonic and astringent. The sapwood is used for the treatment of periodontitis, or gum disease, while the leaves are a remedy for tendomyopathy, which is a painful condition of the tendons, as well as brain disease, ringworm and other skin diseases. The flowers are used for oedema and for the treatment of chronic wounds and gangrene, fever, diarrhoea and to expel parasitic worms.

So a white golden shower does exist, after all. What's next? A pink golden shower? Don't look now, but there is indeed such a flower _ I saw it on the grounds of the same school. This one is not a mutant, however, but a cross between Cassia fistula and Cassia bakeriana.

Apparently it is more common than the white variety, for it has been given the Thai name rattanapruek.