Land of the locust eaters

Despite recent media excitement about big city restaurants in the West that highlight bug cuisine, such as San Francisco's Don Bugito, New York's Brooklyn Kitchen and Nice's Michelin-starred Aphrodite, insect-eating is nothing new nor exotic in Thailand, where carts selling crispy fried grasshoppers can be spotted only a few metres from a KFC. 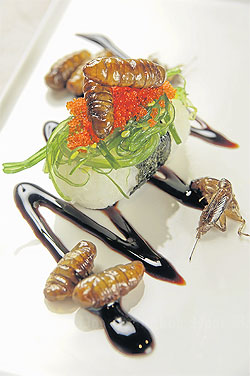 In fact, cooked bugs have been a gastronomic delight among Thai people, especially those in the North and Northeast, for more than a century. Incredibly, there are around 200 types of edible insects in the Kingdom. Interestingly, two dozen of them are habitually consumed by both country folk and urbanites alike.

Thailand, however, is not the only entomophagous (bug-eating) country. The Food and Agriculture Organisation (FAO) says people in 112 other nations in Asia, Africa, Europe and South America have long eaten insects.

But what makes our bug-eating culture remarkable is that Thais have consciously preserved, passed on and developed this culinary heritage to blend in with our modern gastronomy and urban lifestyle.

"People from Western countries assume that Thais simply eat insects right out of the ground. That's absolutely not what happens," said associate professor Yupa Hanboonsong, one of the co-authors of an FAO-endorsed book Six-legged Livestock: Edible Insect Farming, Collecting And Marketing In Thailand, which was launched a couple of weeks ago.

The entomology professor at Khon Kaen University's Agriculture Faculty said that, in Thailand, the process of harvesting, cleaning, cooking and serving insects is carried out with all due caution.

"First of all, we don't just go into a wide open space and grab whatever bugs are available. The older generations have taught us what to pick and what to avoid, for the sake of safety and also sustainability. There are types of bugs that we don't eat either because they are poisonous or they are in their reproductive stage," she explained.

"Secondly, Thais don't eat raw insects and we don't cook dead bugs. The insects must be fresh and alive before we prepare them. Even just cleaning them requires meticulous work. Some insects need to have certain parts removed before being cooked, including their guts and legs as well as their faeces. 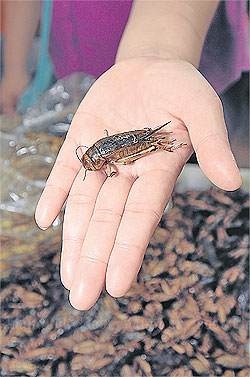 Deep-fried, soy sauce leavened cricket is one of Thailand’s most popular street delicacies.

"To clean faeces from a dung beetle's stomach, for example, we have to let the bugs swim in a bowl of water which will make them excrete all the faeces before we prepare them. It takes time and indigenous know-how to accomplish this."

Impressively, such time-honoured wisdom has been seamlessly combined with up-to-date manufacturing and marketing when it comes to modern gastronomy.

Foreseeing that over-harvesting of edible insects might endanger them, a group of entomologists at Khon Kaen University started an insect farming project 15 years ago to prolong the domestic consumption of these seasonal, short-lived species.

Thanks to their success, which has inspired and paved the way for farmers countrywide, the gourmet-bug industry in Thailand is expanding quickly, generating millions of baht per year.

Today, places where tastily crunchy bugs can be savoured are no longer limited to ungraceful streetside food carts owned by Isan folk. Imaginative varieties of worms, locusts and larvae in neat packaging are also available at sleek kiosks located in air-con shopping plazas and on supermarket shelves. And they aren't cheap.

There are also a number of dining establishments that feature insect-inspired cuisine. Check out Japan I Larb You, a Japanese restaurant at Mega Bangna, should you wish to try sushi topped with crispy crickets, palm weevil larvae and silkworms.

''I believe this evolution derives from the manufacturers' simple idea to make the insects more convenient to enjoy and easier to store. That has given them a more appealing image which has also helped attract first-timers,'' said Prof Yupa.

''Meanwhile, Thais never consider bug-eating as bizarre. We don't treat insects as rustic fare nor food for survival. We are showing the world that insects are just another gastronomic option that are as tasty and nutritious as mainstream meat.''

However, Prof Yupa argued that it was never her intention to set a new food trend nor convert everyone in the world to insect-eating. Although these tiny critters may be as rich in protein as beef or chicken, insects will never replace mainstream choices when it comes to universal diet.

''My mission is to preserve our farmland culture and domestic species. Unless we treat this subject sensibly, the bug-eating tradition will disappear from our society very soon either from the extinction of insects themselves or due to their declining popularity. And, sadly, our younger generation will only know hamburgers and fried chicken,'' she said. 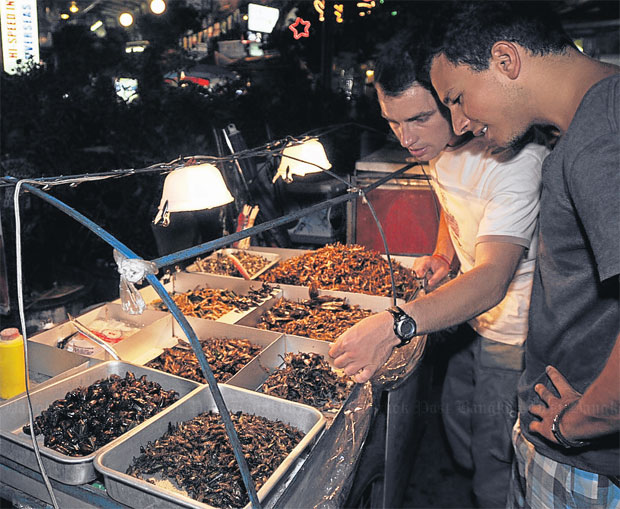 Taste bud pleasure is the main factor that’s drawn urban diners and international tourists to the comfort of bug-munching over the past years.

According to Prof Yupa, the industry's best-selling species is the cricket, with the bamboo caterpillar, which tastes quite similar to French fries but is twice the price, in second place.

The entomologist insists the factor that's drawn urbane diners and international tourists to the comfort of bug-munching over the past years is taste bud pleasure, not the fact that the insects are a good source of nutrients, nor whether the world will run out of food sources in the near future.

''I believe bug-eaters in the old days didn't even know insects were nutritious. They ate them solely because they're addictively tasty,'' said Prof Yupa. ''I cannot put into words how marvellous each type of bug tastes.

''You have to try them for yourself. But I've heard many people say they taste like shrimp, especially grasshoppers. The only thing that makes a grasshopper different from a shrimp is that they can fly.''

Prof Yupa said that while she doesn't have any official statistics indicating an increase in popularity of bugs among the younger generation, she does have anecdotal evidence.

''I can share this with you: when a picture of grasshoppers was shown in a college class 20 years ago, all the students identified them as the No.1 enemy of rice farmers,'' she said.

''Now, when I showed the picture of grasshoppers to my students, the only comment I heard was tasty!''

Forget the deep-fried, soy sauce leavened stereotype, insects can be relished in various other ways than as a crispy snack. They may be even served as the gourmet centrepiece of a meal.

One of the most popular northern specialities prepared with dung beetles is nam prik (chilli dip), in which the cooked bug is pounded and added to the spicy mixture.

And crickets are enjoyed in the Northeast as khua kling (stir-fried minced meat with herbs and spices) and yum (sour and spicy salad).

Other common ways to cook arthropods are grilling, boiling and mhok (stuffed with minced pork before steaming).

''It's a super tasty dish that's very easy to prepare. Just add the insect caviar to the mixture like how you make omelette with minced pork.''

Yet, to cater to the increasing demand from urban entomophagi, some hypermarkets such as Makro also carry a large selection of uncooked, frozen insects that have been certified by the Ministry of Agriculture.