Reika Arikawa is probably the most mysterious woman ever featured in Muse. We do not know her real name, her age, or even what she really looks like. Even the Japanese woman's friends and colleagues don't know she is world-renowned cosplayer. 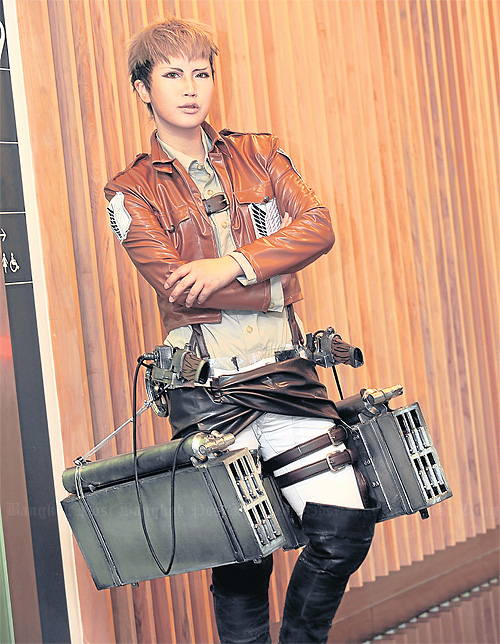 Recently here in Thailand to attend Oishi Cosplay Fantastic 7: World Cosplay Summit to find the best Thai to compete at the World Cosplay Summit 2013 in Japan, Arikawa is a sportswear designer on weekdays and dresses up as manga characters on weekends. It has been 18 years since she jumped into cosplay and she has been voted as No.1 in the world by Worldcosplay.net, a global society.

"I saw people dressing up as manga characters at various events, so I wanted to give it a try," said Arikawa, who studied tailoring in high school. She was also interested in the dramatic make-up seen in Takarazuka (all-female musical theatre), so she bought books to study different looks.

The two skills combined result in a realistic character that seems as though he has just walked straight out of a manga book (Arikawa only dresses as male characters).

"When I go to work, I am an ordinary woman, so on weekends I want to look completely different. If I dressed up as a female character, it wouldn't be that much different and no fun," said Arikawa, adding that about 70% of female cosplayers in Japan also prefer to dress up as male characters. She added that she is a girly person, despite her love for dressing up as manga men.

She has a soft spot for the cool, nonchalant type of character. Her pose and facial expressions during the photo shoot are incredibly convincing, and it seems as if the person being interviewed and the person being photographed are two different people. The Arikawa during an interview is warm, friendly and a little shy, with endearing girlish giggles accompanying most of her answers. In the photos, she is fearless, confident and magically masculine.

What makes her remarkable is not just her ability to make any character come to life, but also the fact that she makes everything herself. When she finds a character she likes, she designs the clothes, sources the materials, makes the outfit and the props, and does her own hair and make-up. 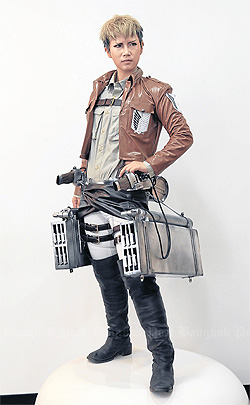 Cosplayers in Japan can be viewed with a hint of negativity, and that is partly why Arikawa keeps her passion a secret. She draws a very clear line between her work and her hobby, and the two sides never meet. When she is not in her costume, she wears a T-shirt and jeans and leads a pretty ordinary life. In her cosplay mode, she looks every bit a fantasy character come true. In her opinion, manga lovers have their own secret world that outsiders don't know about. However, Arikawa also thinks that cosplay society in Japan has become overly competitive, making it less fun for her. Despite her fame, she hardly ever attends events in Japan for that reason. Her global reputation came from social media - Arikawa often has her photographs taken professionally in her full cosplay look and posts them online.

"I usually upload new pictures on my social media page, and there are a lot of fans who like to see them. I have been invited to attend cosplay events in many countries, and it is nice to see that other places are embracing cosplay culture with more positivity. In Thailand, cosplayers look really happy and I can feel that they really enjoy the whole thing," she said.

So far, she has met a lot of fans in China, Singapore, Malaysia and Thailand at numerous events. She credits her fame partly to the photographer's skills and partly to the advantage of being able to make her own clothes. Tailoring in Japan is very expensive, and if one cannot make his or her own clothes, cosplaying can be an expensive hobby. Her wardrobe now consists of about 50 cosplay outfits and a big pile of props, and although she has created over 500 costumes so far, she can only keep what she absolutely loves due to limited space.

Each costume can take from two weeks to more than a month to make. Some are harder than others, but if Arikawa really wants to create something, she makes it happen.

"The only type of character I could never do is probably primary school children," said Arikawa with a laugh.

Her all-time favourite character is Ren Jinguji, the flirtatious male saxophonist in the anime visual novel series Uta No Prince-Sama (Prince Of Songs), which is about students in a performing arts school.

She relates her passion for cosplay to a little girl's excitement for wearing a princess dress and a tiara. Young girls dream of becoming the princesses they see in stories, and Arikawa feels the same excitement.

"There are so many costumes for little girls - Sailor Moon, princesses or other superheroines. I am kind of like that - I see some characters I like and I want to be them for a while. It's quite a pricey excitement, though, considering fabric in Japan doesn't come cheap," she said.

Although she has been doing this for 18 years, it never gets boring for her because there are always new characters that she wants to be.

"I always think I will give up cosplaying soon, but it never happens. I guess the only reason for me to quit is when there is no longer a character that I like," she said.