A porridge that's no joke

A hot bowl of congee, originally made to warm up cool mornings, has over the years transformed into a range of delicious offerings

When it comes to a good early breakfast on a chilly morning, nothing beats a bowl of hot jok, or rice porridge. Every Thai knows this dish well. It is made from fragments of rice grains that have been broken during milling, and which are boiled until they become soft to the point of mushiness. Seasoned minced pork and slices of pork liver and boiled tripe can be added, and many people also put in an egg. Spring onion, and some shredded ginger complete the dish. 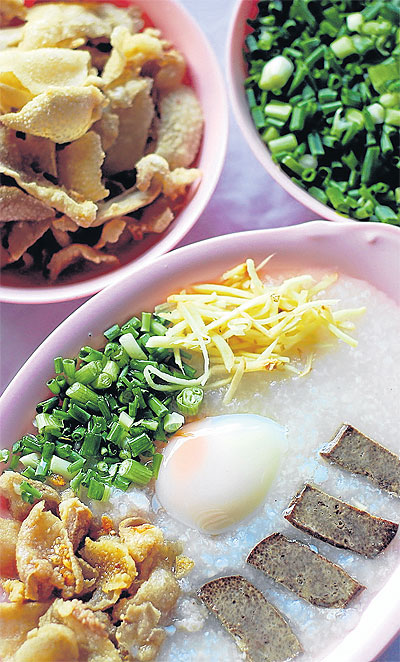 BEST WAY TO START THE DAY: ‘Jok’, an early-morning classic that is still going strong.

Jok is believed to be of Chinese origin, and has a history that reaches back for more than a thousand years. By now it has spread throughout Asia, and is popular everywhere as a food with many uses and benefits. The broken rice grains from which it is made are almost without commercial value, but they cook quickly and easily. The porridge cooked from them is easy to eat, too, and made tasty by adding the meat and seasonings of choice: a perfect warm breakfast. It is a light meal that can be eaten by people of any age, from small children to their elderly great-grandparents.

As jok has spread from country to country and culture to culture, it has undergone many adaptations to suit local tastes. The Vietnamese, for example, have their own traditional breakfast dish, called prakim pla by Vietnamese in Thailand, a kind of pasta with fish meat, fresh coriander, spring onion and crispy fried onion pieces. But they also have jok as an alternative choice. Called khao piak, it consists of the same cooked broken rice with fresh pork blood, fresh coriander, spring onion and crispy fried shallots in oil.

The jok eaten by Teochew Chinese in Thailand is made with pork. To prepare it, the broken rice is boiled in a big pot. When it is to be served in individual bowls, the boiled rice is ladled into a smaller pot and put on the heat, and the broth is added, together with seasoned minced pork, sliced pork liver and, sometimes, tripe that has been cooked until very soft and cut into pieces. Fresh spring onion and shredded ginger are put in for their flavour and aroma, and some cooks add fried garlic in oil. Customers might request an egg to be broken into the bowl first, so that the hot jok semi-cooks it. They can season it at the table with soya sauce and black pepper.

But these are not the only ingredients that can be added to improve the taste. Some people add the fried bread called pathongko. Pathongko come in different sizes _ big, cruller-like ones eaten with coffee and the small, crispy ones added with tao huay nam khing (soft tofu in hot ginger broth). Pathongko go so well with jok that there will often be stands selling them near a rice porridge shop that does good business.

Shiitake mushrooms that have been cooked until soft and cut into thin slices are also sometimes added to jok. Also popular are the tiny rice noodles called sen mee, fried until crisp and then scattered on top to make the dish even tastier.

The Teochew are the largest Chinese ethnic group in Thailand, and their pork version of jok is by far the most widely eaten here. But besides the pork rice porridge, a beef version also exists.

It is a speciality of the Hainan Chinese ethnic group. The Hainanese are very fond of beef, as can be seen from their khanom jeen Hailam, a noodle dish that was once made exclusively with this meat. These days there is a pork option for customers who avoid eating beef. Shops that sell khanom jeen Hailam usually like to offer beef jok for breakfast.

In the past the broken rice grains were not clean white in colour. Broken ends of different kinds of rice were mixed together, white rice together with unpolished grains that could vary in shade from yellow to brown to almost black. When this mixed broken rice was boiled, the colour could be unappetising and off-putting.

Hainanese cooks would add black soya sauce to make a dark-coloured porridge that concealed the unappealing colour of the rice. When it was served, clear broth was added to the bowl together with beef that had been cooked with starch until it was extremely tender, fresh coriander and fried garlic in oil, but no ginger. There were also ground pickled chillies for the customers to add to taste. The chillies were the same kind as are served with khanom jeen Hailam, different from those used by Teochew Chinese, who prefer the type called prik chi fa in Thai. When the beef jok ran out in the morning, the shop would switch to khanom jeen Hailam, which would be offered for lunch and throughout the afternoon.

These days, Hainanese beef jok has almost completely disappeared. A new variant that has been gaining popularity quickly is Hong Kong-style jok, a Cantonese dish. The broth is simmered in a special way with a variety of meats that include pork, shrimp and abalone, as well as 1,000-year-old egg.

When this version of jok first appeared in Thailand, pork jok shops started adding other meats as well, with some of them also including the 1,000-year-old egg. The ones that wanted to continue serving pork jok made traditionally found ways to innovate their offerings and make them distinctive.

The old practice of mixing together the broken ends of different kinds of rice, with their varying colours, is long gone. Today only jasmine rice is used, or broken grains of new rice from the beginning of the harvest season. Some jok restaurants, such as one in Chiang Mai that does a booming business, grinds the rice almost to a flour-like consistency. Many customers like it, just because it is different. Jok used to be exclusively a breakfast food, but nowadays there is no assigned time to enjoy it. It is sold all day, with many people eating it for supper or as a late-night meal before bed.

But if you happen on a warm bowl of jok early in the morning, before it gets light, you are finding it in its original habitat. The atmosphere will be quiet without the noise and bustle that comes later in the day. If the weather is cool, there is nothing better.