All fired up
Life
Social & Lifestyle

Her voice is loud and clear. It is full of passion and the continuing urgency of the campaign, and people listen to her every word. 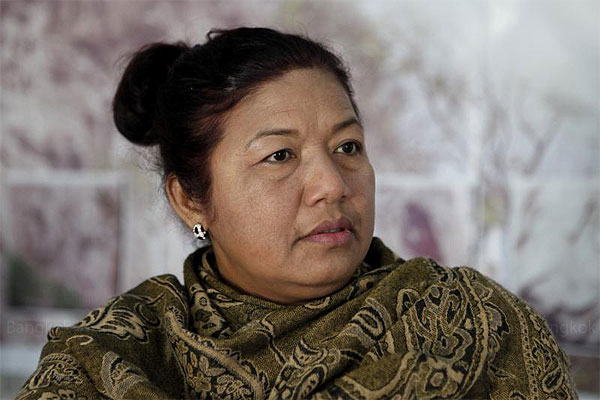 Maliwan Nakwirot was originally a housewife, but now she speaks for hundreds of victims who have been affected by the pollution from the coal-fired power station of the Electricity Generating Authority of Thailand (Egat) in Mae Moh district, Lampang. The mother-turned-activist is known as a Mae Moh victims’ network leader, and is respected as one of the leading female environmental campaigners in the country.

It started personally. Maliwan’s motivation to stand up began with the sickness of her son and problems with her breathing. During the past decade, Maliwan has led villagers in Mae Moh to lodge six petitions to courts against Egat.

Her movement won all cases for health compensation, halting of a mine expansion, crop damage compensation, water contamination, reforestation of old lignite mines, and the protection of a 13-million-year-old freshwater snail fossil.

Last year, the villagers also lodged a new petition that Egat must stop blasting a limestone mountain that houses prehistoric cave paintings. Along the way, Maliwan and her family have received death threats and other forms of intimidation, something that environmental activists seem to have to live with.

“I never thought that one day I would rise up,” said Maliwan. Her 10 years of experience on the frontline has shaped her to be strong and unafraid to speak the truth.

Born in Nakhon Ratchasima, Maliwan moved to Ban Huai King village in Mae Moh district in 1984 with her two-year-old son after her husband got a job in the coal power plant.

Mae Moh houses the 2,400MW coal-fired power station that has operated since 1974, one of the biggest in Southeast Asia. The power station comprises a 135km² open-cut lignite coal mine and the power plant burns more than 16 million tonnes a year.

Even before Maliwan’s family settled in Mae Moh, groups of villagers had protested against Egat’s power plant and its expansion. Little did Maliwan know that the scaling up would eventually affect her and other villagers’ health and lives.

The lignite mine, which used to be a kilometre away from Huai King village, kept expanding and later soon encroached to just across their street.

“The walls of my house and others cracked because of open pit blasting. Dust filled the air. I always smelled sulphur dioxide and there was also noise pollution. My youngest son who was born in the village in 1995 was weak and always got sick. He always told me, ‘Mum, I can’t breathe properly’,” she said. Other people in the village also faced breathing problems.

They turned to the village head for help, but were told to be patient.

“I started recording everything such as noises from the mine, dates when my son was sick, and times I smelled sulphur dioxide, and measured the cracks in my house.

“I kept writing notes because I was very angry that we suffered and no one wanted to help us,” she said.

Day by day, things got worse. The villagers decided to submit a letter to high-ranking authorities, including their municipality mayor and the district chief. But there was no response.

They struggled for help so they selected 10 representatives including Maliwan, who was the only woman in the group, to join a protest of the Northern Farmers’ Federation (NFF) at Chiang Mai City Hall in 2002. NFF is an advocacy group that has campaigned on seven issues relating to communities and farmers in the northern region. After three days camping outside the hall, the farmers’ group told them they could not join the protest.

“I was very upset and cried all the way from Chiang Mai to Mae Moh,” she said.

But she did not give up. She turned frustration into motivation and led 260 people to protest at Lampang City Hall the following day.

“It was my first protest,” Maliwan recalled. “We sat there under the strong sun from the morning until 2pm with hope that the governor would sympathise with our fate. Our action got attention from local and national media. The governor finally agreed to meet us. The conclusion was made to set up a committee chaired by the governor,” she said.

When the news broke out the next morning, Maliwan received a call from the NFF and was accepted to join their protest as she had showed her strength and taken a stand. A month later, she was part of the federation to present their problems to Gen Chavalit Yongchaiyudh,  deputy prime minister of Thaksin Shinawatra’s cabinet, and was assigned to be a chairman of a committee to solve problems in the North. She was new to the big meeting so she sat in the back row.

“Every leader reported their problems, but the problems of my village hadn’t yet been told. Before the meeting ended, I gathered my courage and gingerly raised my hand. I told Gen Chavalit that people in my village were suffering and were sick due to the impact of government’s project in Mae Moh,” she said.

The more she talked, the more resentful she felt.

“I talked and cried at the same time.” To her surprise, Gen Chavalit announced that he would visit Mae Moh a week after. The villagers were very glad, and relieved that finally someone cared. They thought they were close to the finish line.

“On Aug 21, 2002, while we were presenting to Gen Chavalit, there was a hot air balloon floating into the sky. Everyone was surprised,” she said. The green balloon was launched over Mae Moh power station by Greenpeace with the message “Save the Climate — Stop Global Warming” to protest against fossil fuels.

“We did not know Greenpeace and this was a wonderful coincidence. Our news was covered by national media. The event also helped lift our cause to the international level, she said.
Since that day, Maliwan was known as a community leader fighting for victims of the coal plant. This was the beginning of the path. I couldn’t walk back,” she said.

The wide coverage by the media about the impact of the coal power plants also made people in other parts of the country more aware. Many opposed attempts by the government and private companies that wanted to build coal plants in their communities. Maliwan has even campaigned against a coal power plant outside the Kingdom. In 2004, she went to Manila with Greenpeace to forge alliances with other community leaders from different parts of the Philippines. They warned other communities of their tragic experiences in hosting coal-fired power plants in their communities.

Mae Moh’s tragedies include the respiratory diseases and lung cancer of 131 people, 20 of which have died. Their farms did not yield big crops like before and their water was also contaminated with toxins due to sulphur dioxide emissions from the plant. Many of them had to buy mobile oxygen machines to help them breathe. In 2007, she went to Japan with Greenpeace to protest against the Asian Development Bank, which partially finances the power plant project.

It was also around the same year that her community was divided by politicians from Thaksin’s cabinet who claimed they would help the villagers get compensation if they joined the red-shirt rally in Bangkok.

“I was shocked and felt very depressed that no one sincerely helped us. We are the victims of the government’s project and were used by politicians. I felt like I was walking in the dark. Suddenly, everything fell apart. I thought about committing suicide,” she admitted. But the picture of her two sons popped into her head. If she did not keep fighting, then who would protect her children? The second thought pulled her out of the sadness.

“I knew from that moment that no one could ever never stop me,” she said.

So far, 14 villages out of 44 have been relocated — including Maliwan’s community. Her family was moved to Ban Huai Rak Mai, 12km away from the power plant in 2009 during Gen Surayuth’s tenure. The government also ordered Egat to set aside 300 million baht a year for a development fund and to build a hospital for the community.

“Although we have the hospital as we requested, we do not have medical specialists and enough tools,” she said. Maliwan, now 54, always coughs because she is suffering from respiratory ailments.

“We still keep on fighting for our rights. Although some of us have died, including my father, there are still many who are suffering and need help,” she said.

Throughout the years of her huge efforts, Maliwan has little by little created her own Mae Moh legend. “I hope that when people talked about Mae Moh, they will think of ‘Mae Maliwan’,” she added. 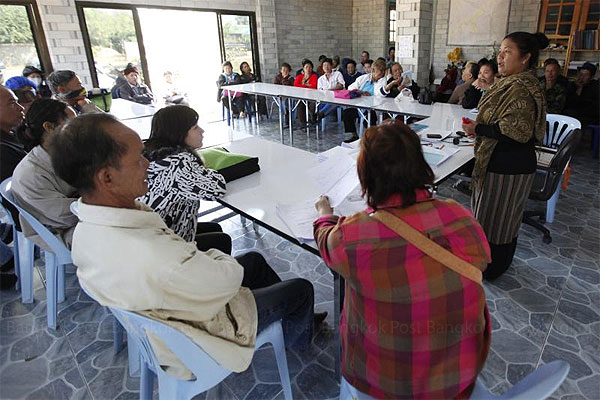