Thailand and the green revolution

Rice has long been at the centre of Thai culture. In the fertile flood plains and deltas as well as upland terraces of modern day Thailand, people have cultivated varieties of rice for nearly 10,000 years. For centuries, Thai households have been organised around rice production. Rice accompanied every meal and most ceremonies and celebrations. Farmers gave thanks to “Mae Phosop”, the Rice Mother. Greeting one another, neighbours called out khin khao rue yang, meaning literally “have you eaten rice yet?”. 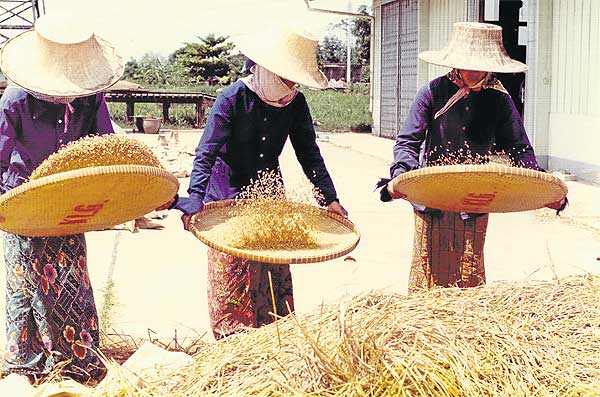 Women winnowing rice at Kasetsart University’s Suwan Farm in the 1970s. As part of its effort to promote a Green Revolution in Asia, the Rockefeller Foundation worked with the Thailand Department of Agriculture’s Rice Improvement Programme and Kasetsart University to develop hardier and more productive varieties of rice.

Rice has also been extremely important to Thailand’s export economy since the 19th century. After signing the Bowring Treaty with Great Britain in 1855, which some historians have characterised as colonisation through trade, Thailand’s exports to Western countries grew dramatically, supported by major public investments in roads and canals that enabled the conversion of large areas of land into rice production. This expansion of rice production enabled dramatic increases in exports, from 10,000 tons a year in the 1860s to half-a-million tons in the 1890s and over a million tons by the 1920s. Most of these exports were shipped to Singapore and Hong Kong en route to China and other Asian nations. After World War I, however, the Thai population began to grow much more quickly, increasing the demand for rice and other foodstuffs at home. When World War II disrupted rice production, the domestic food supply and export revenues dropped sharply. In the postwar years, the country faced
a significant challenge to increase rice production to keep pace with population growth, which peaked at over 3% per year, while meeting the need for export revenues to fuel economic prosperity.

Rockefeller Foundation officials and Thai leaders came together in the 1950s to increase the production of rice and other food crops. The effort was part of the Foundation’s global initiative that would become known as a Green Revolution to conquer hunger in the developing world. Combining scientific research with an increased emphasis on education and technology in the field, this new initiative produced remarkable results. Thus the Foundation contributed to the ongoing building of human and organisational capacities in Thailand and to the development of trained scientists, researchers, and technicians, who became fully enmeshed in the scientific networks that propelled the first Green Revolution in crop breeding and
a second Green Revolution in rice biotechnology. Thailand was well positioned to benefit from the Green Revolution’s attention to rice. Over the centuries, a culture based on long experience with rice growing had stockpiled a deep store of knowledge about the conditions and practices most conducive to its production. Rice farmers had learned to adapt to subtle as well as major changes in environmental conditions, tastes and markets. 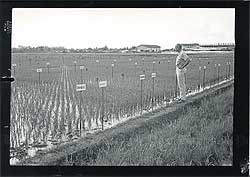 An agricultural specialist at the Rockefeller Foundation assessing rice fields used for testing fertiliser at the Suwan farm near Pak Chong in 1967.

At the end of the 19th century, the Thai government, building on the country’s rich agricultural heritage, began to assist farmers in honing their knowledge of and skills in rice growing. The government improved systems of irrigation and built roads to support agriculture. It also promoted agricultural education for all students, from primary schools to vocational institutions and specialised universities that enhanced farmers’ skills and know-ledge. In the parlance of the contemporary field of development studies, Thai officials engaged in
a many-decades-long campaign of capacity
building, thereby strengthening the country’s “human capital” employed in agriculture.

Interest in agricultural education in Thailand was nothing new, especially in a country where agriculture remained a key part of the economy. In 1898, King Chulalongkorn, as part of a reorganisation of government administration, created
a Ministry of Education, which included instruction about agriculture as part of its mandate. In the years following, the student population grew. In 1921, education became mandatory through the primary level. Primary schools included teaching about farming in the curriculum. Children learned to garden and thus mastered the basic principles of agriculture as well as a way of life. Teachers also studied agriculture, and from 1914 to 1923 a teacher training school provided a two-year certificate programme in agricultural subjects. By the end of the 1920s, because of the specialised education of teachers, Thai students in primary and secondary schools were provided technical-school levels of training in agriculture.

The year 1943 proved to be a turning point in advanced agricultural education in Thailand. Legislation was passed in the middle of World War II to establish Kasetsart University, which was to be devoted to university-level agricultural studies and research. At the same time, the Thai government funded the building of the Huntra Rice Experiment Station.

Over the next two decades, the station would become a leader in research on deep-water rice and play a key part, with the Rockefeller Foundation and other organisations, in revolutionising the cultivation of rice in Southeast Asia. 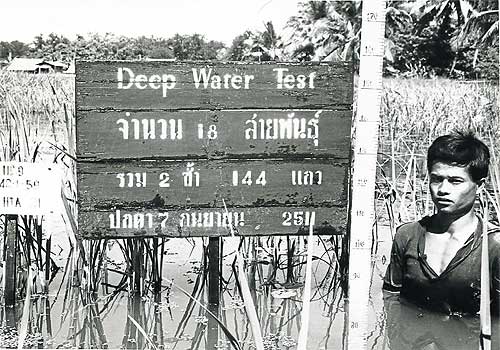 In Thailand and the Philippines, researchers focused on developing rice varieties that could withstand deep flooding.