The love of Siam ... and China
Life
Social & Lifestyle

The love of Siam ... and China

Witwisit Hiranyawongkul is a poster boy in the Middle Kingdom, but not quite so at home 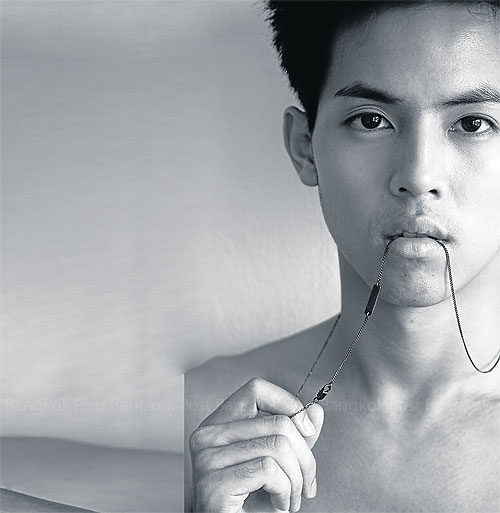 “You know, I get asked quite often how it feels to be more popular in China than in my own country. Frankly speaking, I think it’s great because it means I can do pretty much what I want here in Thailand. I don’t have to worry about anything,” he said. “I’m still very much based in Bangkok though. I go to China when works call. Next month will be quite hectic as I have to travel there every weekend.”

Despite his new album, on which he composed, wrote and sang, being recently released in both Thai and in Mandarin, for many the young man is still remembered for his breakthrough role as Mew, a wide-eyed boy from the 2007 film. Witwisit might think he’s not as well-known in Thailand as he was seven years ago, but he was abruptly stopped on a sunny day Life met up with him by two eager fans who probably still remembered him as Mew.

The character of Mew is indeed hard to forget — a teenage musician who goes through a sexual awakening and develops romantic feelings for his close male friend while negotiating a blossoming music career, friendships, parental neglect and urban loneliness. One of the reasons that The Love Of Siam became such an unlikely hit — in Thailand, as well as in China — should be attributed to Witwisit’s convincing take on the character as well as his sweet face and delicate skin.

“Chookiat [Sakweerakul], the director, was a senior from my school and when he asked me to act in that film I didn’t think much about it. I thought it would be something small. I thought it wouldn’t be well received since it touched on the subject of homosexuality. I actually believed that no one would take notice of me, and when I finished filming it I could go back to my student life and get ready for the university entrance examination. But I was wrong,” he said.

Now 25, Witwisit’s life has changed drastically and he has fully transformed from an accidental, slightly naive teen star into a fully grown, well rounded artiste in command of his life and career. Witwisit also performs in theatre productions, writes scripts, columns and has worked on various pieces of translation. He can sing very well, and he has been composing his own music even before he hit stardom. The fresh face remains intact, however, as well as his glowing skin and bright, pretty eyes under the well-serviced eyebrows.

There is also a sense of depth to Witwisit, from the way he discusses his fame, fandom and future, to the way he carries himself under the constant public and press scrutiny concerning his personal relationships and sexuality. The accumulation of his musical works since 2008 has recently been compiled into the full length album Quarter. Witwisit has also recorded the album in Mandarin Chinese.

“A lot of people think I just sing, but I’ve always written music since before I even entered the industry, but I never dreamed of becoming a singer or a musician. It doesn’t matter to me if there is only one person who listens to my songs and understands them.

“Music comes to me when I least expect it,” Witwisit added. “Sometimes melodies and words come when I shower or wait for friends. I don’t know how to really classify my music, but it’s always emotionally driven. I write from my feelings. It’s therapeutic.”

Born as the only son in a small family in Chiang Mai, Witwisit never thought to pursue a career in music or acting, but since stumbling into The Love Of Siam, he has never looked back. But it hasn’t always been easy. While shooting the movie, he had to travel back and forth between Bangkok and Chiang Mai while preparing for his university entrance examination. The sudden success was also to prove quite a shock for the high school student.

“It came very fast. You can say it happened overnight. I couldn’t really cope with it at first. I remember walking into my school’s canteen and everyone turning to look at me — I could see them whispering. I was quite paranoid with all the attention. It got to the point that when I went to meet up with friends somewhere in public, if I got there first, I would hide in the toilet to avoid being approached when I was alone. It took a while to adjust,” he said.

Witwisit also managed to secure himself a place at Thammasat University amidst all the mania that the movie generated. He naturally chose to study film, and graduated within four years.

“There are many facets in film production. I like scripting, but I can’t envision myself as a director as they are responsible for many lives. If I ever decide to direct, I will do a low budget film,” he said.

All the home-grown attention prepared him — to a certain extent — for what was to come in China, where he suddenly became a star in his own right. The film The Love
Of Siam could be credited as one of the earliest Thai pop culture products that sparked a wave in Chinese interest in Thai stars (Witwisit’s co-star in the movie, Mario Maurer, also enjoys a large following there). At first Witwisit ventured to China with his band, August, which was formed as part as of the plot and with the cast of The Love Of Siam.

On the strength of that success, he was contracted to write the soundtrack for the Chinese film Love On That Day and later released an album called Fortunately I Met You. Although not a Mandarin speaker, Witwisit writes lyrics in Thai which are then translated into Mandarin by a team at the record company.

Pictures of Witwisit being greeted by adoring fans as he arrives at Chinese airports, or throngs of screaming Chinese at his concerts, are now quite common in Thai celebrity magazines. And it was The Love Of Siam that started his cross-border stardom.

“Movies have a chance to reach a wide audience. I first went to China with the band August, and the reception was very good. Even after we were no longer August, I was invited back to meet the fans. It grew from there. At first, I managed myself and dealt with the fans in China directly. Some of the well-connected fans introduced me to the media, and I got to be on TV shows and such. That’s how I first established my career there — thanks to my fans,” he said, adding that now he has a proper agent.

From a Thai star he has become an unsuspecting Asian idol, and just like any other Asian idol, Witwisit has an army of fans in China who would take a bus ride for three days just to meet him on his frequent visits. Although Witwisit says he adores and appreciates his fans as they’ve been instrumental in getting him where he is today, he also guards his privacy as much as he can.

Asked what he has in store besides promoting his début album, and constantly working in China, Witwisit said he’s excited to participate in a play as well as other projects that pique his interest.

“I think I don’t push myself. I am not sure if that’s a good or a bad thing. But I always try my best, and see what I can do with each project,” he said.

“I’ve come a long way already. I want to see how far I can go, but if it doesn’t really go anywhere, I won’t have any regrets.”

Chinese tourists may flock to Thailand, but on the flipside, Thai stars have crossed the geographical and linguistic frontiers to make it big in China. Taste, technology, the large Chinese population reaching out for international pop-culture, and ethnic proximity between the two countries - all of this plays a part in the surging popularity of Thai stars in mainland China (as well as Taiwan).

Films like The Love of Siam, A Little Thing Called Love, and Yes or No, have carved out large fan bases among Chinese viewers who watched them on DVD or online. Likewise Thai soap series have gained much attention from mainland viewers who reportedly dig the candid, I-love-you-or-I-hate-you style of Thai dramas they saw. Both Thai film and television celebrities have been travelling for "meet-and-greet" with Chinese fans in the past decade.

As of Jan 1, 2014, this is the list of top five Thai stars who have the largest following on Weibo, the Chinese version of Twitter. (To give a perspective, Jackie Chan has 20 million followers and Korean singer Psy has 24.9 million).

2. Nichkhun Horavejakul (2.6 million). Nichkhun is a Thai native and member of the Korean boy band 2PM.

3. Witwisit Hiranyawongkul (1.6 million). Witwisit is a lead actor of The Love of Siam (see main story).

4. Mario Maurer (870,000-plus) Mario co-stars with Witwisit in The Love of Siam and is also the lead in A Little Thing Called Love.

5. Nawat "Pong" Kulratanarak (260,000-plus) Nawat became well-known in China for his roles in TV soap series Songkran Nangfah ("War of Angels"), Buangrak Kamathep ("Cupid's Snare") and many others.