The team that delivered the ever-popular Hyde & Seek gastro bar on Ruam Rudee in 2010 has dropped the long-awaited follow-up venue in Peek-a-Boo. And, as suggested by the name (which is known as ja-ay in Thai), they are in a particularly playful mood. The interior (courtesy of the fresh-faced 10 x 10 Design Studio) is in fact a forest of trees, three to be exact, with the bar positioned in the biggest trunk. There’s plenty of dark timber and greenery draped around the airy space that extends to two outdoor areas and room for 150 people. Groove as a food district is still finding its feet (and taste buds), and might need to rely more on nearby hotel patronage, but it has loads of potential with its breezy layout and solid spread of options, in what should be perfect for the indecisive who can just opt for Groove and decide the specific cuisine on arrival. 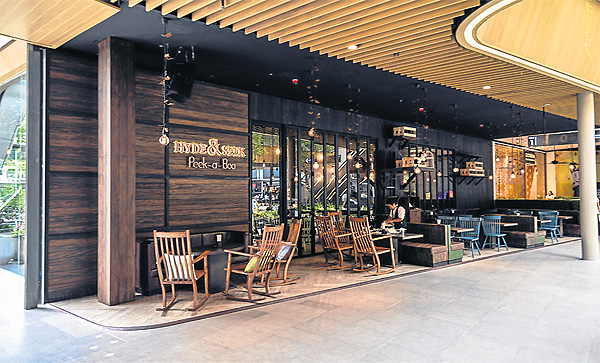 Under the watchful eye of chefs Ian Kittichai and Peter Pitakwong, the menu is a spread of familiar, comforting favourites with gourmet twists from the well-travelled culinary entourage. (You can tell the place is owned/run by chefs by the size of the kitchen). Fourteen of the dishes carry over from the original Phloenchit premises’ menu in this soft opening phase. From the newcomers, we started with Peek-a-Boo selection of mini scotch eggs (B295++), a micro twist on the British classic. The “One of each” option is a sampler of the three full-flavour styles that are hard to choose a favourite among. Duck sloppy joe (B275) is a bright beetroot-red bun with a satisfying filling of duck, Thai jalapeno pepper, corn, cabbage and US cheddar. (Extra points here for getting the word “sloppy” on the menu). Pork chop parmigiana (B375) is another informal departure but don’t let the sweet gravy drown the well-crumbed chop. Not to be overlooked is the extensive and detailed cocktail list by Exec Bartender Nath Arj-Han of Tippling Club, Singapore, fame. From his signature selections, Floral garland (B325) is a refreshing highball of jasmine-infused sake, apricot brandy and rose/coconut jelly that impresses with flair and flavour. Day dreams (B325) with Japanese melon and Bangkok’s only snowfall continues the fun. As does all-American outing Whiskey rebellion (B325) featuring smoked rosemary flare and infused maple as a sweetener. Peek-a-Boo old fashioned (B275) also continues the legacy of the original Phloenchit outlet with a smokey, cigar-tinged version of the classic. Beers start at B155.

The kitchen gets points for the all-day breakfast options (B250-B325), of which Eggs Benedict (B250) is a bargain. And menu items such as sandwiches and smoothies enable all-day dining, fitting with the location. While the food is worth the trip itself, with such prowess behind the bar you don’t need to eat out of politeness — drop by after work or before a movie for a signature cocktail. 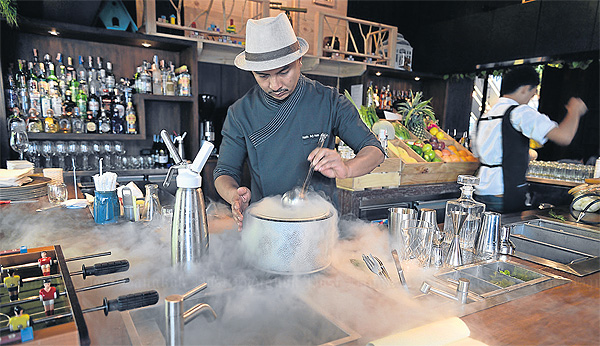 The forest theme works well in photos, particularly at night. You will impress friends with snaps of such greenery so close to Ratchaprasong.

They have pared down the pricing for this mall-esque outing, without compromising too much on quality — no mean feat. And as the first generation of Hyde & Seekers start to shine their F&B talents, Peek-a-Boo spearheads the heavy competition of the Groove precinct. G 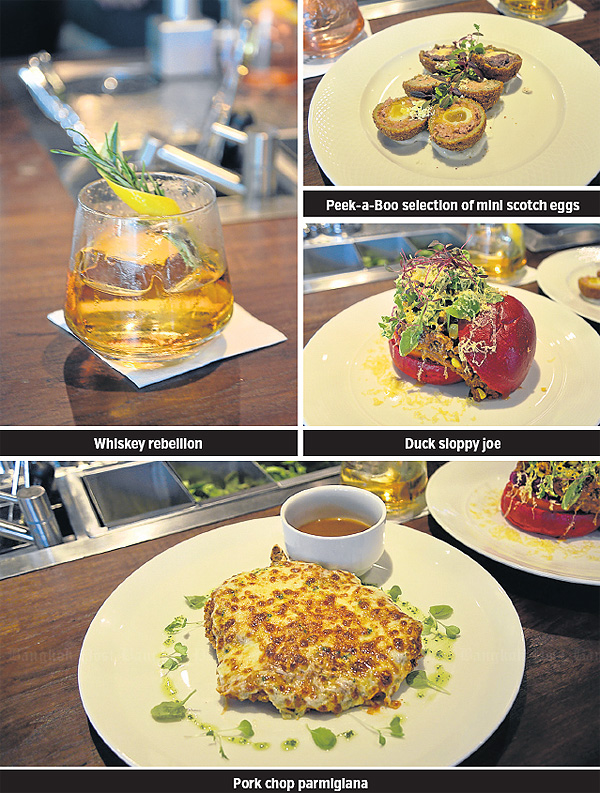