Wararuk Sunonethong looks like a woman without a trouble in the world. Sporting a constant wide smile, booming laugh and an incredibly sunny face, she is the true epitome of a happy person. She laughs without reservation, smiles without a reason and radiates positivity everywhere she goes.

The laughter yoga session at the Women Cancer 2014 event.

Wararuk now works as general manager for corporate communications at Central Group, but she is also a well-known yoga instructor with five books on the exercise to her name. What makes her stand out from thousands of yoga instructors in Thailand is that she is a certified laughter yoga leader.

"Laughter is the best medicine, and an incredible anti-stress cure. Just let it out from deep in your stomach — that's where your stress is accumulated," she said at her recent laughter yoga session, part of the recent Women Cancer 2014 event at National Cancer Institute, organised by Central Group.

The Chiang Rai native spent a decade of her life as a flight attendant, a career which she said was very hard on her body clock.

"At the time, I didn't really care about my health. I took my good health for granted. At one point, my well-being started to go downhill," said Wararuk, who decided to quit her job as a flight attendant when her series of illnesses began.

It started with milder problems — mumps, chickenpox, haemorrhoids and appendicitis — followed by a major shock that turned her life around; she was diagnosed with cancer.

"To be honest, I wasn't that surprised," she said. "In a way, I knew it was cancer because of what I'd done to myself all those years. At first, I was depressed about it, but soon, I picked myself up and told myself that it wasn't time to be sad — it was time to make things better." She is now thankful that it happened, as the illness led her towards a healthier lifestyle. She began practicing yoga seriously from 2004, and later became a yoga instructor. Wararuk noticed that her health gradually improved. She looked and felt better than she ever had, and her illnesses became milder.

As she became more fascinated with yoga, she learned that there's another type of the discipline that would be very useful for her — laughter yoga.

Without hesitation, she signed up for a class and trained to be a certified laughter yoga leader.

Since then, Wararuk, one of the few laughter yoga leaders in Thailand, started spreading the joys of laughter to overstressed people, from office workers to cancer patients. She has been invited to companies, hospitals and events to help people release their stress and find happiness.

Her sessions are fun and simple, although it takes a bit of warming up by participants, especially if they do not know each other well. Naturally, people do not feel confident about laughing out loud when surrounded by strangers, but after a few minutes of ice breakers, the sessions becomes a joy.

Laughter yoga, essentially, is all about releasing pent up stress in the stomach by laughing out loud continuously. Laughing, in this sense, does not mean the body's natural response to humour; practitioners do not need to find something funny. Rather, it is the projection of the sound of laughter.

Sessions usually last an hour, although 15 minutes of laughing is apparently enough to relieve tension. It's inspired by yoga breathing techniques, and rhythmic laughing can be quite meditative as well.

"Laughter really has medicinal properties, and it is good exercise, especially when coupled with yoga poses," said Wararuk. "For very ill patients, they cannot move much, so laughter yoga is a good option. The movements are fun and easy, and laughing along with others is a good stress buster."

She explained that many diseases are caused by stress, so any activity that eliminates this is good for health. Laughing helps the body and the mind relax, and it can be a good workout too. Notice how sometimes you laugh so hard that you feel your stomach getting a little firmer — that's one of the health benefits of deep-rooted belly laughs. Although her illnesses are not completely gone, Wararuk is feeling much better about herself and her life in general. She has also learned an important lesson — a doctor's diagnosis is not the final answer.

"I think the best doctor is not at any hospital, but within your heart. If you really want to turn your life around, you can make it happen. Your doctor can tell you what's wrong, but only you can make it right again," she said.

Her own experience is the perfect example of that. Many years ago, she had an endometrioma, known as a chocolate cyst, and many other complications in her reproductive system. Her doctor told her that her womb was in such a bad condition that she should consider having it removed. She was also told that due to her poor reproductive health, having a child was not a possibility.

Taking a positive attitude, she didn't let that stop her from hoping. She took good care of her health and believed firmly that one day, she could become a mother.

"Despite the doctor's recommendations, I decided against it. Miraculously, I got pregnant and gave birth," she said. 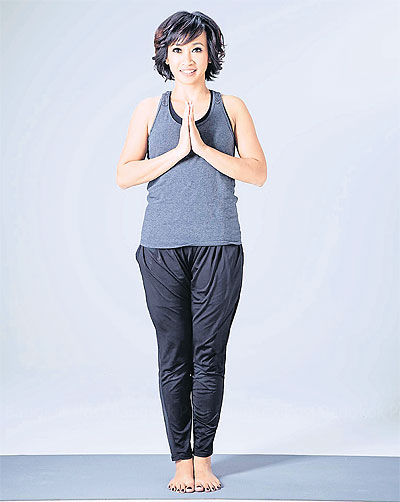