Two recent cases of wild elephants charging at tourists’ vehicles in Khao Yai National Park may have many people thinking twice about visiting the area. 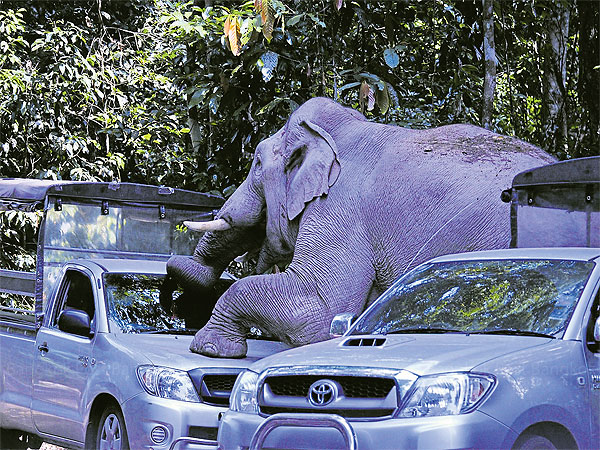 A wild elephant stomps on the bonnet of a car in Khao Yai National Park during the New Year holiday.

The two incidents — the first during the New Year holiday and the latest on Saturday — were widely reported, along with frightening photos of the beasts stomping on cars. Despite the “attacks” causing minor damage and no human injuries, the media has described the behaviour of those elephants as “roguish”. In one case, the elephant was described as member of “a local jumbo mafia”.

The incidents have spurred curiosity about the nature of these animals. But the question whether the fault lies equally with humans is also one worth exploring, as mass tourism continues to highlight an increasingly complex relationship between man and nature.

Patarapol Maneeorn, official veterinarian at the Department of National Parks, Wildlife & Plant Conservation, said wild elephants do not mean to cause harm to humans.

“People often forget that animals’ senses are different from ours. Elephants have very good ears and relatively poor eyesight. Also, we often forget that these elephants are wild animals, not tamed domestic animals kept in zoos or elephant camps. Another thing that tourists often forget is that national parks are wild animals’ homes, and tourists are just visitors,” said Patarapol, who oversees animals in national parks and wildlife sanctuaries across the country.

Wild elephants run into vehicles because they might not be able to see clearly and might want to examine them, he said. Noise from vehicle’s horns can also cause elephants to become nervous. It is also currently mating season, in which elephants might behave erratically.

Before the recent incidents, there have been many other similar cases in Khao Yai National Park, as well as other wildlife areas across the country. These cases are perceived as warning signs of unchecked tourism in wildlife areas. 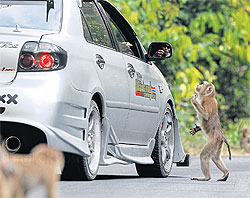 Wild monkeys have been increasingly seen begging for food in Khao Yai.

“People care about what they get from their trips to national parks. But I beg you to ask a new question: What can national parks and wild animals get from tourists?” said Patarapol.

Elephants lunging at vehicles is dangerous, but Patarapol said that there are worse and more alarming cases in which animals suffer from human activities. The pictures that do not make rounds, he said, are those depicting gruesome images of medical operations to remove plastic bags from the abdominal spaces of deer. There are pictures of monkeys scavenging from garbage bins, and one showing two porcupines — a mother and her baby — being crushed by a car. Some of the images might seem goofy or slapstick, but in reality show the damage rent by human activities: a deer with garbage bin on its antlers, a deer with cover of a garbage bin around its neck, a deer with its hoof stuck in a can of fermented vegetables.

“To remove a plastic bag from a deer’s antlers, national park staff need to shoot it with anaesthetic darts to put it to sleep first, since it’s not easy to approach animals,” said Patarapol, adding that each shot of anaesthetic cost taxpayers 5,000 baht, with the operation costing 15,000 baht.

Deer are another species that often get close to tourists and are subsequently affected by human misbehaviour.

“I dare to say that the majority of deer you see in Khao Yai National Park have plastic garbage bags in their bellies,” Patarapol said.

Deer also become addicted to human food given to them by tourists, and have begun to scavenge food from garbage bins.

“Animals do not understand what garbage is. For them, food packaging and food are same thing,” he said.

Veterinarian staff have operated on scores of deer in the past few years. It is not difficult to open a deer’s abdomen, squeeze plastic bags from its colon and stitch it back. But it is impossible to put wild animals in a cage after the operation because “they will get stressed and bang their head on the cage until it bleeds”.

Thus, wildlife veterinarians need to release treated animals back into the forest, which put those wild deer at risk of infection.

Monkeys are also major victims of tourism in national parks. Fed by tourists, a huge number of wild monkeys become addicted to tasty human food. Many stop eating natural foods and beg for food from humans.

“They become more aggressive and raid tourists’ tents, search bags or even jump at cars in order to get food,” Patarapol said, adding that many of the animals are hit by vehicles in the process. 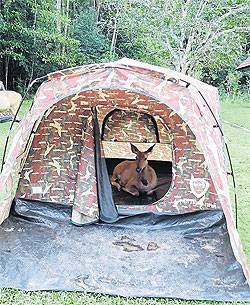 A deer rests inside a camper’s tent.

For conservationists, these are signs of behavioural change.

“We frequently see wild animals around tourists camps. Wild animals gradually stop finding their own food and simply wait for tourists to feed them. This is against nature and will lead to unwanted consequences.”

Khao Yai National Park staff have recently begun observing dingos around tourist areas. They usually hunt for deer, but more and more they come looking for foods from tourists. Dingos might not attack humans, but they are likely to be shot because of their perceived danger.

Other threats to wildlife in Khao Yai National Park include the introduction of alien species by humans, who bring in and release poached animals such as gibbons, monkeys, pythons or even crocodiles, most of which survive only a short period of time. Take, for example, the case of a giant white python being released in the forest, after which it was attacked by a troop of monkeys. The python could not find its own food and moved very slowly. Its white skin drew the attention of many animals, resulting in it surviving only a few days.

Misunderstanding and ignorance are obvious causes of the problem, as many tourists feed or free animals out of a sense of duty or perceived kindness.

“For many, feeding animals or helping them from cages is an act of merit making,” Patarapol said. “But they don’t know they are creating problems,” he said.

“The kindness of human hearts can sometimes lead to bad results.”

1) Stay at least 30m from an elephant. If an elephant moves in your direction, calmly and slowly reverse your vehicle. Wait until the animal walks away before slowly resuming movement.

2) Never use your vehicle’s horn. Elephants have highly sensitive ears, and loud noises can make them panic or become angry.

3) Never use your camera’s flash when taking photos, as the light can draw an elephant’s attention. Having poor eyesight, elephants often examine sources of light.

4) Always leave your vehicle’s engine running, but do not rev the accelerator. Many drivers turn off engines when they see approaching elephants. The movement is counterproductive, as elephants become accustomed to the low, humming noise of a vehicle’s engine. Without the noise, elephants might notice unusual quietness and walk closer to examine vehicles.

5) Never turn off your vehicle’s headlights. It is imperative that drivers be able to observe every movement of an elephant in order to maintain proper distance. However, never use your vehicle’s turn signal, as this can will arouse an elephant’s curiosity.

- Don’t feed animals. For conservationists and national park staff, tourists feeding animals is the root of all problems. Tourists often think that animals that approach humans are famished. In reality, wild animals in national parks have plenty to eat. But there are animals such as baby elephants and deer that prefer to stay beside roads because the temperature is warmer there. Many tourists unknowingly throw them food. Feeding wild animals makes them addicted to human food, which can be bad for their digestive systems. Veterinarians have to treat animals for digestive problems caused by eating coconut-based curry or spicy foods. Becoming addicted to human food causes wild animals to beg, waiting around the tourist areas, along streets or scavenge from garbage bins. Many animals are killed as they attempt to get food from tourists’ vehicles.

- Don’t throw garbage.  Garbage can ruin water, soil and nice views. Further, wild animals can perceive garbage, especially food packaging, as food. Many animals unknowingly eat plastic bags because they smell food on them. Large animals such as elephants can digest and defecate these items, but others, such as deer, cannot.

- Be quiet. It has been know that animals have a much more heightened sense than human. Elephants can detect voices over a kilometre away and their feet can detect voices from vibrations on the ground. Animals can also be provoked by noise. Do not use your vehicle’s horn. Do not play loud music. Never use fireworks in national parks.

- Drive very, very slowly. Animals often travel from one forest tract to another in order to find food and mate. There have been disputes and protests against road construction in Khao Yai and other national parks, as roads can create conflict between wild animals and humans. Apart from frightening animals, fast-moving vehicles can put their lives in jeopardy. 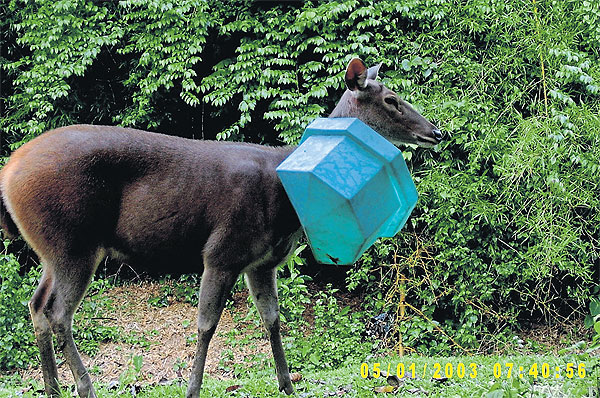 A deer with the cover of the garbage bin stuck around its neck. 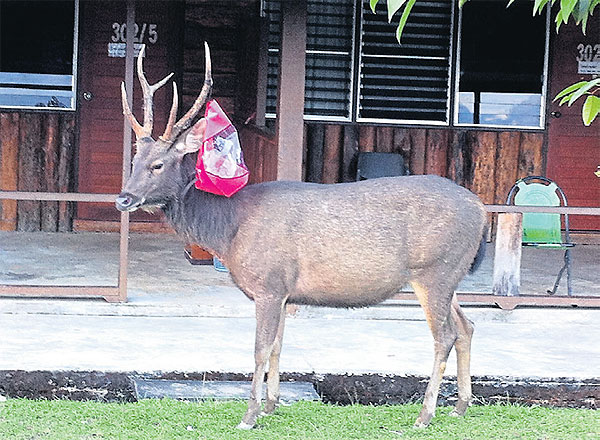 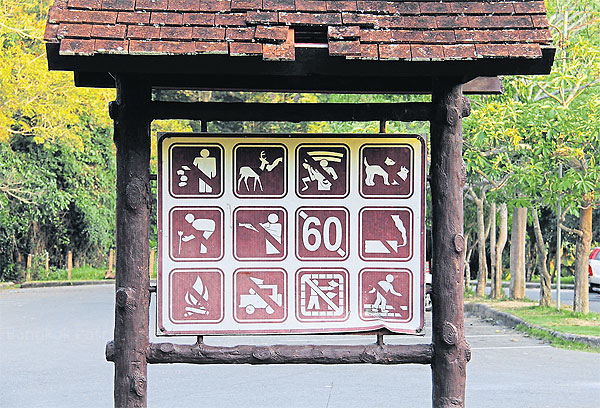