Bangkok commuters are from all walks of lives, but many of them share one problem — bad taxi service

Taxis have been in the headlines a lot lately, and most of the stories are not good news. From time to time, there are honest drivers who return valuable belongings and cash to forgetful passengers, but lately, a barrage of unpleasant taxi experiences has driven the image of this form of public transport to a new low. 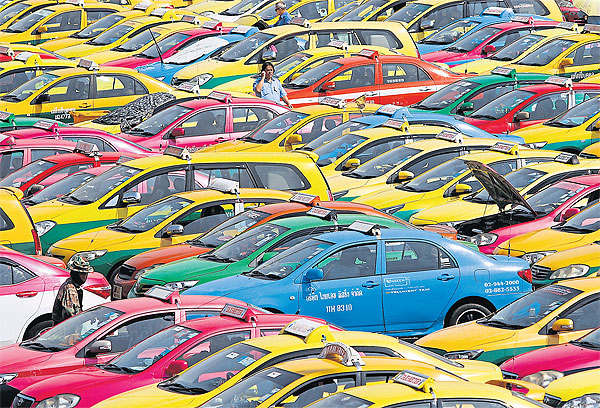 The chief complaint is that Bangkok taxis refuse passengers — the familiar reasons are shift change, low fuel, traffic jams or because the passengers are going too far, too near, or to unfamiliar neighbourhoods. Flagging a taxi only to be refused repeatedly by the driver has become a common experience. On Dec 27 last year, Thirapong Rawdprasert, director-general of the Department of Land Transport, reportedly hailed 23 taxis, out of which 21 refused to take him and another one demanded a fixed price.

Passenger grumbles have been loud, particularly at Suvarnabhumi airport. Last month, taxi drivers at the airport threatened to stop services unless they were allowed to double the big-cab surcharge and get suitcase handling fees. There was a high-profile case involving a Japanese man who posted his complaint online, prompting a group of drivers at the airport to put up a sign rejecting Japanese passengers. Last week, another taxi driver cheated a passenger with a modified metre — he said later that he didn't "intend" to do it. There are also cases of taxi drivers rejecting Thai passengers since they only want to pick up — and overcharge — foreign tourists.

Metered taxis were introduced in Bangkok in 1992 — before that, passengers and drivers had to agree on a fixed price before hopping in. Currently there are more than 100,000 taxis registered in Bangkok (about 80,000 are owned by taxi garages and co-operatives, and the rest by individuals). Under the current complaint system, affected passengers can make complaints on the 1584 hotline. The Department of Land Transport will summon accused drivers to pay 1,000 baht fines. Second-time wrongdoers have to pay 1,000 baht fines and face a seven-day suspension of their public vehicle driver's licences. If they do wrong again within a month, their public vehicle driver's licences will be revoked.

While public resentment grows, taxi drivers complain, too, about low fares that don't reflect the cost of living. Recently, a taxi driver wrote on www.Facebook.com/Voice of Taxis: "We do not refuse passengers, but the routes you want to take. Taxis should have the right to file complaints against passengers who take us to be stuck in traffic jams and leave us before reaching the destination. You want better service, but you force taxi drivers every way you can. You want everything, but do not want to pay more. Is it fair?"

He claimed taxi drivers have to pay car down payments, fuel bills, vehicle maintenance bills and car insurance fees, then give the rest to their families.

He added: "We taxis are in trouble too. If possible we'd like to ask for a totally new regulation because what we have now is a slave contract and not equality." 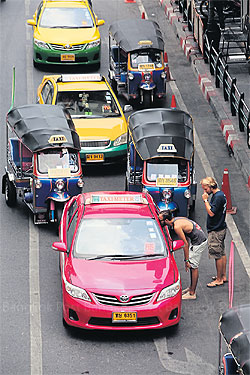 Tourists and taxis in front of MBK shopping complex.

Amid negative criticism against drivers, Chokchai Lertchalermmongkol, the owner of A5 Taxi Company which operates about 60 vehicles, admitted that around 3% of drivers in his company received warnings from authorities through the 1584 complaint hotline, mostly for refusing passengers, not switching on the meter and for being rude. The company usually alerts the accused cabbies to report to the Department of Land Transport to receive warnings and pay fines of 300-1,000 baht and will fire repeat offenders.

Knowing refusal is illegal, Chokchai, however, expressed sympathy for taxi drivers who sometimes have to reject passengers.

"Some cabbies live and drive only in the Thon Buri area and do not know the directions in downtown Bangkok and it is too far and time-consuming for them to return to pick up their regular customers. But, they refuse mostly because of traffic jams," Chokchai noted.

The extra fee is 2 baht per minute if taxis are stuck in traffic or are travelling at less than 7kph. Roughly, according to Ministry of Transport, the new fare represents an 8-11% increase.

Despite the recent taxi fare hike, Chokchai said that the new prices are still too low and the starting price should be 50-60 baht.

The company requires all taxi drivers to have public service vehicle driver's licences, name plates for placing on the dashboard, driving experience and a good knowledge of Bangkok streets. Their home addresses must be checked. Drivers and guarantors must also sign taxi rental contracts.

He noted that taxi operators have been trying to seek support from the state to improve the communication and metering systems for taxis. Taxis in Thailand still rely on the analogue system.

"All taxis should be equipped with closed-circuit cameras, GPS and navigation systems. And the metering system should be linked with GPS. This will help ensure safety and price accuracy," he said.

Chokchai regards Uber, a smartphone application-based car booking service, as a factor to stimulate taxi operators, drivers and the Land Transport Department to improve taxi services. Uber, however, has been deemed illegal, though it's still in operation.

Sumet Ongkittikul, director for Transport and Logistics Policy at the Thailand Development Research Institute, recently wrote in his article, "An Uber Problem for Taxi Patrons", that in Thailand, the regulatory framework tends to focus mainly on regulating fares while neglecting innovative services. As a result, there were 18,465 service-related customer complaints made via the department's hotline during an eight-month period from October 2013 to May 2014, equal to approximately 77 complaints a day.

An Uber driver who used to drive a regular taxi (he requested anonymity) said he thinks there are more good taxi drivers than bad ones. When he was a cabbie, he never refused passengers. However, he would not risk his own safety. Whenever he spotted suspicious passengers, he would turn off the "In Service" light.

"I think nowadays the taxi service has been in trouble because a number of taxi operators fail to screen drivers carefully," he noted.

Another taxi driver, who requested anonymity, said a number of cabbies refuse passengers because they do not care. Those who drive their own taxis (and don't rent from a garage) can earn more than 40,000 baht a month. Those who work hard and refrain from drinking and gambling can pay for a university education for their children. Even taxi drivers who rent taxis can make about 25,000 baht a month. There are many good taxi drivers and many of them have regular passengers.

A 40-year-old woman, Onn, who has been using taxis for 20 years, said: "I take taxis to the office every day. Generally 1pm is a difficult time to find taxis. Most taxis say that the traffic is bad or the shift changing time is 2pm.

"I used to hail two or three taxis and face refusals, but I was usually taken by the fourth one. I was angry. Sometimes, I was asked to pay fixed prices, but I did not go."

A 32-year-old man called Tod, who has been a regular taxi passenger since his junior high school years, recalled that when he was a student it was not difficult to find taxis and very few cabbies refused him, probably because competition was not as fierce.

"Nowadays, there are so many passengers that taxi drivers can still find other people who want to go. Some of them refused or were reluctant, especially in front of shopping malls and Siam Square. But, if we keep hailing, there will be finally a taxi driver who wants to go. For me, the maximum number of refusing taxis is five or six."

Tod believes that harsher punishment for bad taxi drivers might be one way to improve the situation, such as six-month to lifetime bans. A system which allows real-time monitoring of names, surnames and faces of taxi drivers like that of Uber might also be useful.

"Public transportation in Thailand is not good enough, so people still need taxis. I use all kinds of transportation ranging from boats to buses, taxis, motorcycle taxis, tuk tuks and trains because they can be combined as good links. We just need to know how to use them and there will be no problems," he added. 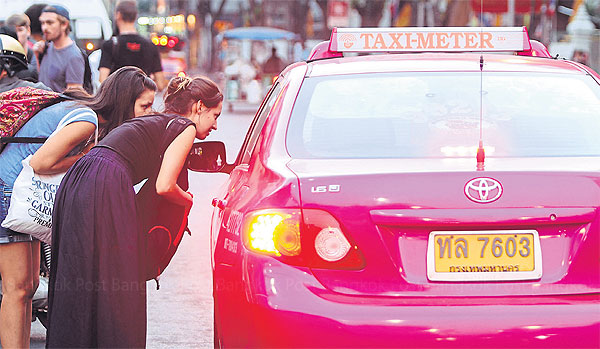 Backpackers try to get a taxi near Khao San Road.