While most of Thailand hastens to prepare for the launch of the Asean Economic Community later this year, Chulalongkorn Business School (CBS) is aiming to become a leader in the Asia Pacific region. 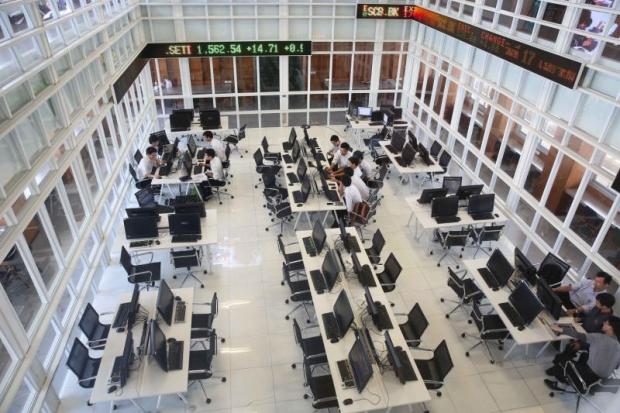 The Financial Lab is used to learn about financial management and the stock exchange.

"With the global shift towards Asia as the economic centre of gravity, we need to be ready and ensure our educational standards are on a par with other world-class international schools," said Assoc Prof Pasu Decharin, dean of CBS at Chulalongkorn University.

Assoc Prof Pasu boasts a bachelor's degree from Chulalongkorn University's Faculty of Commerce and Accountancy and an MBA from University of Colorado, USA. The only son of a former Chiang Mai governor and Chulalongkorn University lecturer, he has worked as a lecturer at the university since 1993. He later obtained a PhD from the School of Management, Asian Institute of Technology in Thailand, before returning to teach and join the CBS management team.

"Apart from teaching, the most important task of a new-generation dean is to bring innovation, and to upgrade institutional standards," said the dean, who has at the helm since 2011.

In what can only be seen as good news for Chulalongkorn University and Thailand's educational system as a whole, CBS has recently been accredited as a world-class business school by the Association to Advance Collegiate Schools of Business (AACSB) and the European Foundation for Management Development (EFMD).

The AACSB accreditation is the hallmark of excellence in business education, and has been earned by fewer than 5% of the world's business schools.

Founded in 1916, the US-based AACSB is the longest-serving global accrediting body for business schools, offering undergraduate, master's and doctorate degrees in business and accounting. Achieving accreditation is a process of rigorous internal review, engagement with an AACSB-assigned mentor, peer review and interviews with alumni.

Today, there are more than 727 business schools in 49 countries and territories that have earned the accreditation. Among them are Harvard University, Massachusetts Institute of Technology (MIT), London Business School, National University of Singapore, Hong Kong University of Science and Technology and the University of Sydney.

"We take pride in being the only business school in Thailand to earn AACSB accreditation for all of its undergraduate, master's and doctorate degrees. This means our graduates are second-to-none and can equally and successfully contribute to the country and the world arena," said the dean. "While Chulalongkorn University's business school has long been recognised as being among the most prestigious in Thailand, such recognition had always come through word-of-mouth. The accreditation has provided irrefutable proof."

In Thailand, two other business schools — Sasin Graduate Institute of Business Administration, Chulalongkorn University and Nida Business School — have also received AACSB accreditation. However, both are graduate schools and received the accreditation for postgraduate levels.

"We are very pleased that the BBA International is the only programme outside Europe to have earned the accreditation for a period of five years — the maximum possible," said the dean.

"These accreditations can be likened to ISO (International Organization for Standardisation) in the business field. They are rewards and also tools to bring about internal change," said the dean, who is also the first Thai to be selected as one of the AACSB board of directors.

"The most difficult task in moving the school ahead is making changes. In the faculty, the working team includes my lecturers and advisers. Some are of the view that Chulalongkorn has long enjoyed the status of being Thailand's most prestigious institute and therefore question why we need to tam kon farang [follow the foreigners]. In the same way, many companies question the need for ISO. The real question is: Do we want Chula to remain a local university?"

The dean added he is fortunate to enjoy the co-operation of the CSB's executive team, faculty members, staff and alumni in bringing about change. The accreditation means greater co-operation between universities, and more exchanges of visiting lecturers and students, thereby further enhancing educational quality in the future.

The dean does not see other business schools as competitors but rather as allies.

"We constantly exchange and learn from one another. It is hard to make comparisons as each has its own strong points and cultures. One of CBS's strong points is the Chula brand image but if we do not work on it, it may disappear," he said. "In building the CBS brand, my '3Is' strategy includes 'Internationalisation, Innovation and Impact'. My vision is for CBS to become one of the most recognised business schools in Asia Pacific, an institute whose graduates have an impact on society and become thought leaders in the region."

Among the many new projects initiated by CBS under his management are the Alumni Mentorship Programme, and the Social Innovation Centre, Thailand's most powerful brand awards, as well as the Petralai Management Theatre, where students learn about communication, empathy, administrative and leadership skills through acting and plays.

"We need to ensure students' research and work is applicable to business and constantly contributes to people in communities," he said.

"With today's business school trend moving towards Asia, the largest markets include China and India and the second most popular markets are in Singapore, Hong Kong, Korea and Japan. Thailand is among the third most popular markets and the accreditation can act as a magnet to attract more international students. I would like to urge other universities in the country to apply for accreditation which will benefit Thailand as a whole." 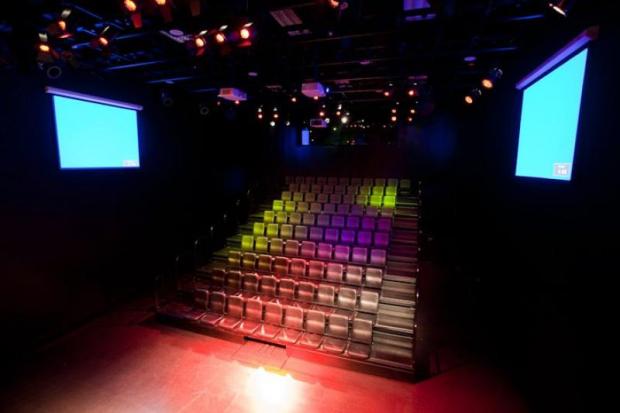 The Management Theatre, where students learn about communication. 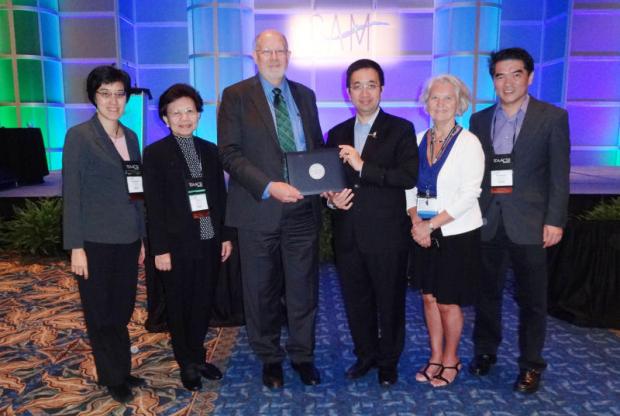 Assoc Prof Pasu Decharin, centre right, dean of Chulalongkorn Business School, receiving the certificate for the accreditation to the Association to Advance Collegiate Schools of Business (AACSB), hallmark of excellence in business education, from Thomas Robinson, centre left, CEO of AACSB International. The presentation was held during the AACSB's International Conference at Tampa Convention Center in Florida, USA.