Simply does it
Life
Social & Lifestyle

Unlikely rock stars, the low-key Muslim members of Labanoon want nothing more than steady work and a happy fan base after 17 years in the business

Metee Arun, Anan Saman and Nattanon Thongon are the very antithesis of all things rock'n'roll.

The only thing remotely "rock" about Labanoon, which means fresh milk in Arabic, is their no frills, three-piece music. You would be hard-pressed to link the trio, who first burst onto the alternative scene in 1998, with any tales of showbiz debauchery and scandals. No sex, drugs and selfies for this prim lot.

Known to be religious and media shy, Labanoon, whose members are Muslim, try their best to stay away from the limelight, and do not enjoy mingling nor attending unnecessary functions. They said that they are devoted to work, family and football.

"We get so awkward doing interviews or making appearances. We become quite shy, and don't know what to do with ourselves. As a matter of fact, we're feeling shy giving this interview now. Well, at least it's easier than being on TV!" said vocalist/guitarist Metee, who did most of the talking.

After 17 years, with a short break in the middle of their career, and seven albums, Labanoon advances with two new singles with new label Genie Records. October saw them release Suek Sa Naree (Women Studies), while Palung Ngan Jon (Poverty Power) has garnered a little over 12 million YouTube views after its release in March.

"I think one of the reasons that we're still blessed to be able to do what we do without having to change is because our fan base believes in us. They can relate to us on many levels. They find solace in our simplicity, honesty and sincerity. With Labanoon, I think you get exactly what you see. No complications. No flash. No fuzz. I think that a lot of people can identify with that," said bassist Anan.

This has always been the story of Labanoon — everything they do is low key, and it gets to the point that casual observers do not realise that Labanoon has been one of the hardest working bands in the business since their classic hit Yarm (Security Guard) hit the airwaves in 1998. There have been times where they played 29 shows a month, but those days are over since the band now chooses to limit their undertakings due to time and health reasons.

Many also think that most of their bookings must come from the South where they've forged strong cultural links and religious ties.

"Most people seem to think that way because they know that we're from the South. We play there a lot, but most of our shows are in the North and the Northeast. Surprisingly, our fans are also very diverse in age. We have young ones singing our songs these days. It's very nice," Metee said.

The story of Labanoon, as everything else with them, began simply enough. While in Grade 11, Metee, Anan and former drummer Somporn Yusoh entered Thailand's biggest student band contest, Hot Waves Music Awards, representing the Islamic College of Thailand. They made it to the final round where they caught the attention of the now defunct Music Bugs record company. Within a year, their debut Nom Sod (Fresh Milk) was released to critical and commercial acclaim with Yarm and Nuk Jai (Heavy Hearted) blowing up the charts.

"It was beyond our wildest dreams," said Anan. "We were just kids. After the contest, someone called us to perform in front of Siam Center. We were delirious. We never thought we would get that far! We got paid 3,000 baht, and we were just so, so happy. You can imagine how ecstatic we were when we first learned we would be able to release an album!"

Five albums later and Labanoon decided to take a break in 2006 after eight years. The hiatus was welcomed by all members. Drummer Somporn parted ways to join Kala.

"We began playing professionally since we were in Grade 11. Can you imagine that? We knew nothing else. We were still playing even after we graduated from university. Collectively, we agreed to try to do something else, to pursue careers that our university education granted us. Also the music industry at that time was a bit weird. We didn't know how to navigate," said Metee.

Anan tried a career in IT. Metee, unexpectedly, became a secretary in the Satun Provincial Administrative Organisation, as well as a university lecturer. His students lovingly called him "Labanoon".

"In a way, politics is very much like showbiz. Both deal with people, and how you deal with them, just different contexts. I think I learned a lot from it," said Metee.

After three years, however, Labanoon decided to regroup and ponder their return to music industry. Drummer Nattanon of Oblivious fame substituted Somporn, and Labanoon was back in business.

"We missed our lives on the road. We missed playing music. We missed touring and many other things. I also took stock of myself, and discovered that I wasn't made for a competitive, interest driven environment like that," said Metee. "Money made from music is innocent money."

After the reunification and extensive touring, Keep Rocking was released in 2012, and last year Labanoon joined GMM Grammy's Genie Records.

Gearing up to release their eighth LP, Labanoon has no qualms with the new one single at a time format. They think this age is more fitting for truly milking one single rather than bombarding the short attention span audience with one full album after another.

"Digital age? We're still in the tape cassette age!" said Metee, laughing. "We are always willing to move with technology, and it's necessary to adapt, but that doesn't mean we'd change our entire core being as a band. But I still find the idea of tape cassette exciting. Maybe our new album will come in that format too. It's not hard for us to make, but it's harder for you guys to find cassette players, isn't it?

"For our new album, we're concentrating on being 'fresh milk'. We're highlighting the fact that we're a simple three piece band who writes and sings about everyday happenings. We're simple, and that's all there is to us. We usually write from experience, as well as stuff we read from the news or what people around us are going through. I think there aren't that many things you can talk about lyrically. Lyrics always revolve around love, life, loss or encouragement, but it's how the artists put that on the plate," said Metee.

Labanoon is also getting with the social media trend. They are enjoying interacting with fans from all walks of lives, something that they didn't think they would take up. They now handle all social media platforms by themselves, and laugh off occasional trolls that come their way.

The band also credits their strong friendship and their affection for another, as well as their ability to say no to vices, as key to staying in showbiz.

"We are at this stage of our lives that music is not just a dream anymore. We're too old to be idle dreamers. We have a team to take care of. We have responsibilities," said Metee.

"It's just that we happen to be very much in love with our responsibilities." 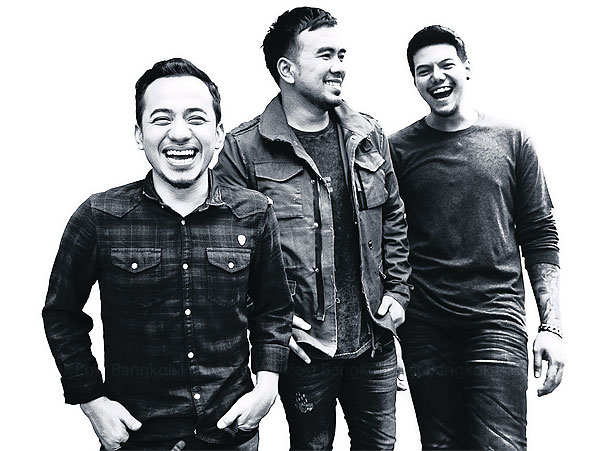