published : 8 Jun 2015 at 03:30
newspaper section: Life
writer: Anchalee Kongrut
The city's largest rooftop farm is open to the public every Wednesday and Saturday, with workshops every third Saturday of the month.

What do people do when visiting Siam Square? At Bangkok's nucleus of youth culture and weekend activity, some naturally think of shopping, while others consider the area a top choice for meeting friends or having a first date.

But as of last month people are able to go to Siam Square for something new: growing rice and vegetables on the rooftop of shopping complex Siam Square One.

The idea of growing rice in the middle of the capital sounds outlandish. But that's exactly the point, according to Kotchakorn Voraakhom, the landscape architect who designed the rooftop space known as Siam Green Sky. She reminded us that the area known now as Siam Square is no stranger to agricultural activity. It was a rice plantation when King Rama VI donated the land for the official opening of Chulalongkorn University nearly a century ago.

In the following decades, the city expanded, and the area underwent restless development with new buildings, hotels, cinemas and the Skytrain emerging. It eventually evolved into the capital's bustling, iconic area.

"It is amazing to see how Siam Square transformed itself from humble rice paddies to a thriving commercial space. Now, the rice paddy returns," said 33-year-old Kotchakorn, who also helped design the landscape of the Thai Pavilion — complete with real rice fields — currently displayed at the Milan Expo.

Rice cultivation has come back in the most unlikely fashion. The resurrected rice field of 2015 is located on the rooftop of the neighbourhood's newest building and is the size of a football field. Novice growers arrive here by Skytrain, or car, and need to get on escalators in order to start their green-fingered work.

Chulalongkorn University, owner and operator of the property, wishes to make this top-floor farming experiment a pilot for urban agriculture, with the aim of reducing flooding caused by heavy rainfall. The return of rice growing to Siam Square is Bangkok's answer to a global trend of introducing agriculture to urban landscapes. 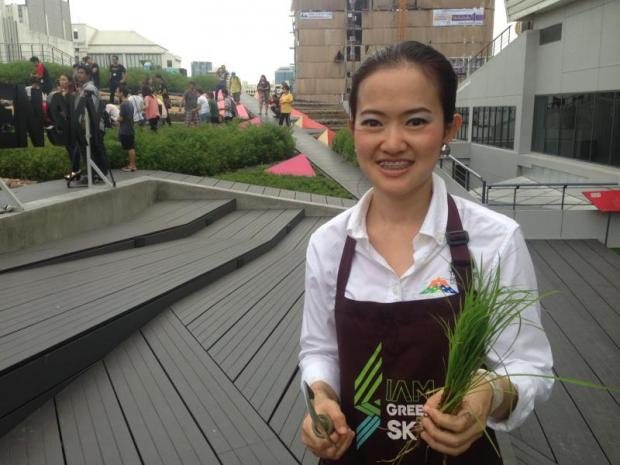 The urban green movement — which manifests itself in the form of farmers markets, community farming, home-grown vegetation plots and rooftop planting — is taking off in cities around the world. Chicago, credited as a pioneer, reportedly has 359 rooftops covered with vegetation, most of it edible, as part of the city's sustainable development policy. The French government in March introduced a new law requiring rooftops of new buildings in commercial zones across the country to be covered in plants or solar panels.

The green rooftop movement was first adopted by some buildings in Bangkok several years ago. Phranakorn Nonlen, a boutique hotel in the old town, turned its rooftop into a micro-farm that provides vegetables for the hotel's restaurants. The rooftop farming plot at Lak Si District Office became a showcase for the Bangkok Metropolitan Administration, which aims to use green rooftops to reduce urban heat and even slow down floods — soil can absorb rainfall and relieve the amount of water hitting the ground. Thammasat University is going to create a huge green rooftop at one of its new buildings on Rangsit Campus, while Chulalongkorn University plans to copy the model of Siam Green Sky at other buildings on the campus. Meanwhile, Thong Lor's Root Garden, which houses plots of vegetables right in the middle of Sukhumvit, has become popular. 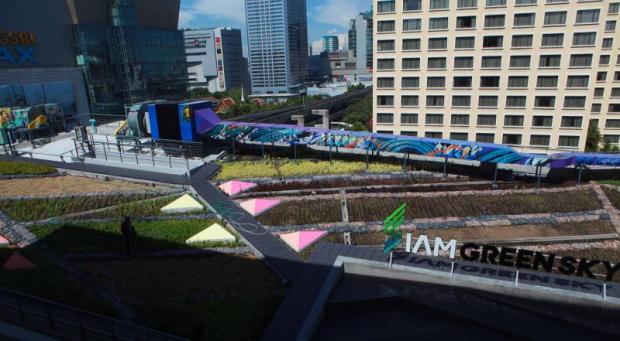 Siam Green Sky has been open to the public since May 23. It welcomed enthusiasts to get their hands dirty at the opening, but right now the plot isn't actually green because the plants are still growing — the idea is to experiment on the right mix of plant species to see what can cope with Bangkok temperatures. More importantly, rooftop farming is not just a display. Urban conservationists and agricultural experts will run free workshops on the third Saturday of every month, and the public is encouraged to sign up to learn about growing vegetables and actually plant seeds. As of now, Siam Green Sky is open to the public every Wednesday and Saturday, and it has immediately become a hit: tours are fully booked, as is the workshop. The project organiser is planning to open an organic market with the harvest.

"This is about more than growing rice in the city. It is also about learning where our food comes from and about sustainable food production and consumption," said Kotchakorn. 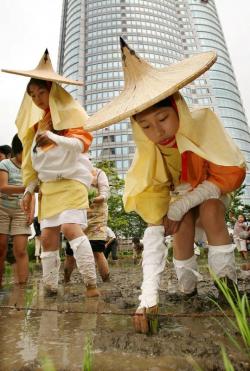 Tokyo residents plant rice on the rooftop of a seven-storey building in the Roppongi Hills urban development.

To make this a real green effort, she created a story for the space. Solar panels are installed to generate electricity for powering the lampposts at night. At the end of the field, a little cloister was created for recycling waste into organic fertiliser for farming workshops. To make the area appealing to the younger generation, artists were invited to transform the previously bland concrete structure with graffiti. A metal box container has been spray-painted with images of the jungle and wild animals that stare into the skyline (in the direction of Paragon Shopping Complex). The unpleasant long chromium tunnel that goes across the garden was painted to look like a green serpent. Alex Face, a well-known graffiti artist, put his signature character Mardi at the wall of the composting room.

Under the bed of the new plants lie the grains of history, social and political. Three years ago when workers demolished the fire-gutted remains of Siam movie theatre, torched by the riots in 2010, a team of architects asked them to collect up soil, bricks and debris from the remains of the old cinema. They were mixed with gravel and soil and used in the rooftop project.

"You may call it romanticising ecology," said Kotchakorn. "But this is not just farmland, but a piece of history from Siam Square."

Siam Green Sky opens for the public every Wednesday and Saturday, from 10am-6pm. Workshops and talks are available every third Saturday of the month. Go to www.facebook.com/siamgreensky for updates.  Contact Siamgreensky@gmail.com or call 099-001-8514. 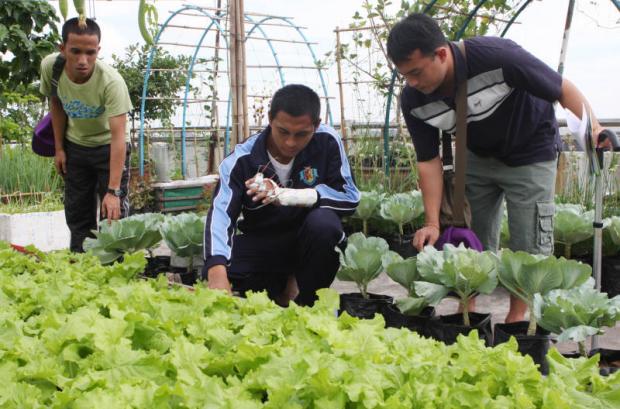 Soldiers injured in the Deep South insurgency are employed on the farm. 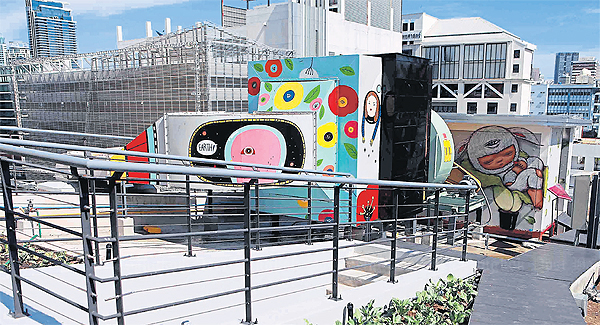 Artists have been invited to add colour and imagination. This is a space for making fertiliser.