All hail the king of fruits
Life
Social & Lifestyle

All hail the king of fruits

Nine things to know about durian this season

For many, it's a slice of heaven that titillates the palette and teases the senses. But for many others, it reeks of death, and those in possession should immediately be quarantined.

You either love or loath durian. Dubbed as the unrivalled "King of Fruits", our thorny friend/foe, depending on where you stand, is our pride and joy. With its unique fragrance, hard or soft custard texture, and distinctive kind of nectar-of-god sweetness hidden in an intimidating thorn-covered, spiky husk, durians are like a soft poison-coated caramelised cake — tempting and menacing at the same time.

Southeast Asia is the only region that can grow their majesties. Durian agriculture began to thrive in the Ayutthaya period and in 2011 the Office of Agricultural Economics revealed that Thailand exported 271,948 tonnes of fresh durian, valued at 4.6 billion baht, establishing Thailand as the world's leading producer and exporter of the exotic fruit.

Our thorny lover might be an acquired taste, but it is very much part of Thai life. Here are the nine things you should know about durian this season. 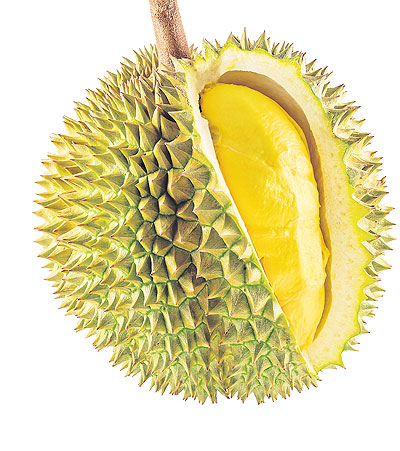 According to the Department of Agriculture, there were almost 300 distinct types of durian grown throughout Thailand. The most common species in Thailand is mon thong, chanee, kaan yao and kradoom. Tastes, colours and textures vary and there's no one definite favourite. For most people, however, mon thong is popular due to its weaker fragrance, beautiful light yellow and tight texture (the lighter fragrance is also a reason why many supermarkets choose to carry them). Meanwhile, the long-stemmed kaan yao is creamy, nutty and rich and also a favourite of many hard-core fans.

In recent years, however, we've seen a surge of exotic species whose names are unfamiliar. Out of the bunch, long lublae seems to have come out of nowhere to threaten the dominance of mon thong. Originating in Uttaradit province, long lublae has now secured its place on the province's official website as one of its prized possessions. Originally belonging to villagers Lom and Long Uppara who discovered that they had something different on their hands in 1977, long lublae was registered in 1978. They are of a darker shade of yellow, have a lighter fragrance and creamier taste.

But if you really want to become a durian connoisseur then you need to empty out your wallet for a taste of Nonthaburi durian. Whatever cultivar it is, if it's grown in the soil of Nonthaburi province, it comes with a higher price tag. Believed to have the best tasting durian in all of Thailand, Nonthaburi-grown durian became even more desired when the 2011 Great Flood wiped out 98% of the plantations. Chantaburi Agricultural Research Centre was kind enough to hand over Nonthaburi durian sample species that they had kept to salvage the breeds from becoming extinct. One Nonthaburi durian can fetch anything from 3,000 to 25,000 baht.

It's up and down. The average price for mon thong in a fresh market or durian truck roaming your soi is around 80 baht per kilo (around Minburi, Ramkhamhaeng, Saphanmai), but the price rises as we move downtown. Tops supermarket price is at 109 baht per kilo. A selection of durians at a shop called Nong Pop on Sukapiban 3 retails at 150 baht per kilo, as it claims to have selected the best out of the bunch.

The owner of Nong Pop durian stall said that the price changes all the time and some years it can go as low as 35 baht per kilo."We're selling it a bit more expensive than other vendors because we're very certain of our quality. Also, we usually crack the husk open for all customers on the spot," she said.

But that's nothing compared to the bustling Aor Tor Kor market where the mon thong is priced at 700 to 800 baht a kilo and the kaan yao at around 1,000-plus baht a kilo. They also claim to have the best available quality.

Forget fresh markets, supermarkets or random durian trucks. These days, there are many ways to purchase your beloved durian. There are online shops catering for special breeds (try doing a Facebook search for "durian" in Thai; some of these are even from durian orchards). Thai Postal Office is even on board in promoting long lublae as they're now providing a sale and delivery service until July 29. Call 1545 to place your order, it's as easy as ordering a pizza.

There are many viral postings doing the rounds debunking health hazard factors (high calories, high sugar, increase in body heat) that have been associated with durian consumption. The most audacious suggestion indicates that two compartments of durian for breakfast are sufficient for a meal, and will help diabetic patients. Bamrungraj Hospital's nutritionist Somsri Tachavarakul, however, begs to differ.

"It's true that durian has a low glycemic index which means that diabetic patients can eat it," she said. "But the problem is you need to take a low glycemic load into account meaning that quantity also matters. And if you don't eat anything else besides durian for breakfast, you only get sugar and carbohydrate and you'll be lacking other important nutrients such as protein and fibre. The myth going around now says that you need two compartments, but two compartments can mean a lot of durian depending on its size. My best advice is to consume it in moderation." 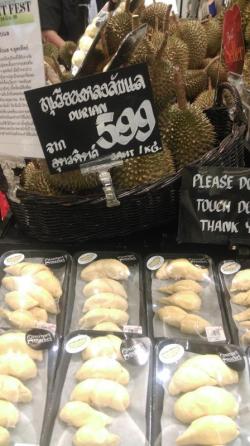 Durian at a Bangkok supermarket.

It's relatively unknown outside of music circles, but durian wood is an excellent material for making drum kits. Traditionally, drums are made of maple, birch and mahogany (so Western!). Home-grown drum company CMC has been experimenting with all kinds of locally-grown woods, and durian-tree drums are just one of its many innovations. Around five years ago, CMC's head honcho Krisakorn Chandontrikij started experimenting with durian wood due to its lightness and sonic possibility.

"The drum world has used the same materials, which has produced pretty much the same sound for 20 years," he said. "We've always tried different local woods to see which one works and durian wood works wonders. Santana's percussionist Karl Perazzo visited our shop and we happened to be working on durian drums when he walked in and he became curious. We sent him the prototype and his feedback was amazing, so we became confident to produce more."

Charndej Chanjumroen, a drummer with one of Thailand's prominent rock bands Lomosonic is also a proud owner of a durian kick drum.

"People are still intimidated by something they're not familiar with. My durian kick drum is light, but very sturdy. I also feel that it produces punchier sounds with larger, more attacking volume," he said. "Who would have thought durian could be musical as well?"

Durian has its fair share of pop cultural references throughout Southeast Asia. There's a Miss Durian beauty pageant here and Thai rock band Moderndog has a song called Durian on their debut album, with a message urging us to look past external appearances.

Durians are usually referred to as a proverbial weapon in Thai soap series. Thanks to its numerous spikes (they actually hurt, so be careful), soap characters often threaten to hit one another with durians — it has been like this for decades on Thai television. Also, when TV drama villains become extremely popular (in fact hated) through their roles, the recurring joke is the actors should stay away from markets to avoid being attacked by vendors who have durian shells lying about. It has never actually happened, at least not yet.

Don't be so nationalistic by imagining that durians are only a Thai thing. Indonesia, Malaysia and Brunei also enjoy widespread durian cultures of their own.

But durians in each country taste differently and it's still debatable who grows the best. We suspect that it's all subjective since it's pretty much to each his own when it comes to taste preference.

Durian is not just yellow. There's durian sukang (red durian) from Sabah and durian dalit (orange durian) of Borneo. They are just as their name suggest, red and orange. They're not easy to come by, so the best way to get your hands on them is probably travelling to Sabah and Borneo.

Indonesians believe that durian acts as an aphrodisiac. There's an Indonesian saying that goes something like "when a durian drops, a sarong goes up".

There are several ways to eat fresh durian. Just crack the husk and pop a piece in your salivating mouth. Some households in the South eat them with plain rice, which is certainly not for the light-hearted. Fresh durian also accompanies sweet sticky rice and is consumed as dessert.

Just like everything else, durian popularity goes through peaks and troughs. Due to its strong odour, odd exterior and difficulty in consumption, the fruit has never been considered sexy or cultured compared to, say, mangoes or lychees. It also represents an unhealthy lifestyle due to its extreme richness — a big no-no for the lives of the urban cool.

But of late, there has been a sort of durian revolt, much like how people are rising up against the hipster pretence. By championing something rather unbecoming, mundane, provincial and unattractive as durian, mainly through social media postings, the fruit has been appropriated by some as a statement that counters the cool, breezy, slow-life movement.

Why go strawberry or orange picking at scenic farms? That's way too wishy-washy when the real thing is braving 20 plantations in Chantaburi, Rayong and Trat; provinces that have joined Tourism Authority of Thailand's "Aroi Took Rai, Chim Pai Took Suan" campaign. But just be careful not to stand under durian trees — that can be fatal. 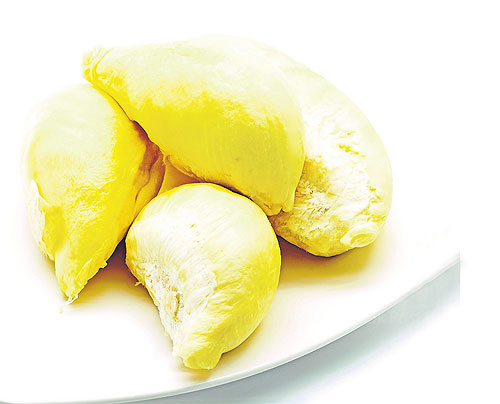 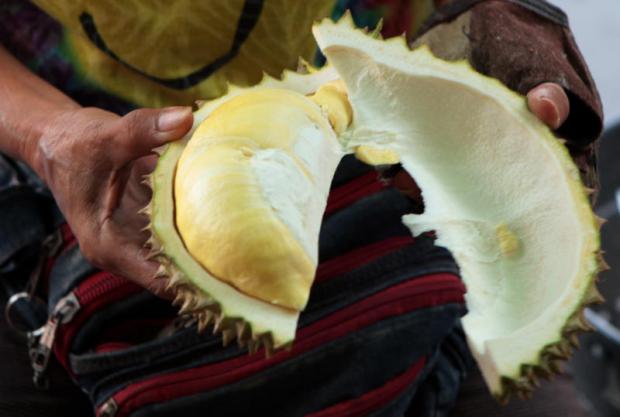