From exile to acceptance

New documentary tells the moving story of gay Burmese human rights activist Aung Myo Min, and the emotional return to his homeland after 24 years in Thailand

'Every journey starts with one step. So today is one step for a long journey," said Burmese activist Aung Myo Min in the documentary film This Kind Of Love. During the scene, he was standing inside a Bangkok BTS Skytrain. He was on his journey home to Myanmar after 24 years of exile.

"Why should I spend my life in exile? Because there's no other choice," said Myo Min in the film directed by American Jeanne Marie Hallacy. The 45-minute documentary follows Myo Min's life and his journey fighting for human rights.

"This Kind Of Love is a story about faith in standing up for what you believe is true," said Hallacy. "It's about selflessness in working for the greater good. It's a journey about heroes, not just about Myo Min, but of an entire generation in Myanmar and those before them."

The film was premiered last month during the Human Rights Human Dignity International Film Festival in Yangon. It will be showing in Bangkok next Wednesday at the Foreign Correspondents' Club of Thailand. The filmmaker has also partnered with Thailand's Prachatai news website to webcast the Thai version.

Myo Min was one of the student protesters during the 1988 uprising against the military regime in Myanmar. It was a year of bloodshed, and thousands of lives were lost. Myo's family were threatened for information on his whereabouts. His mother had to disown him publicly to ward off the imposing authorities.

Lives were harsh for all — for Myo, especially, since he is also gay. That made a lot of things even more difficult.

Fleeing to the jungle of the Thai-Myanmar border, Myo joined the resistance group All Myanmar Students' Democratic Front. His sexual orientation was kept hidden at first. When it was eventually revealed, his comrades were not accepting of him. In the end, he left the armed forces to pursue a more peaceful path of activism and advocating for human rights, as well as LGBT rights.

Myo lived in exile in Thailand for 24 years. His home country finally welcomed him back in 2012.

After being away from home for almost a quarter of a century, he was glad to see some improvements in the empowerment of the LGBT community. People's attitudes are starting to change for the better, and LGBT members are becoming more visible.

"But, on the other side, there's still a long way to go," he said of the LGBT situation in Myanmar. "Particularly the conservative groups who are using and misinterpreting religion, tradition and customs with regard to LGBTs.

"Many conservative people attack me for promoting LGBT rights under the banner of human rights. They don't understand that LGBT rights are human rights as well. They think LGBTs are asking for unnecessary rights. They don't appreciate the increase in the LGBT movement. My message is: don't underestimate the power of LGBT people. Like a rainbow flag, we can make everything beautiful with our different skills, capacities and our commitment."

After political reforms in 2011, many protesters in exile were invited back to aid the country's political transition. Reforms also saw the release of pro-democracy leader Aung San Suu Kyi from house arrest. Myanmar seemed ready for change. But Myo himself remains sceptical of the agenda.

"Whether this change is real or artificial, we could not see it on the ground. For example, the release of political prisoners is very good, but how about the new round of political prisoners recently arrested and placed in prison for exercising their fundamental human rights of peaceful assembly or peaceful demonstration?" he said.

Political struggle, a fight for human rights, democracy and justice, are the central points in this docufilm. Such themes have been recurring among director Hallacy's previous works: Burma Diary in 1998 and Into The Current: Burma's Political Prisoners in 2012.

Hallacy first met Myo over 20 years ago in the jungle along the Thai-Myanmar border. It was his passion and humour in times of hardship that impressed her. She deemed Myo "a rare voice" among democracy activists.

"I had huge admiration for him standing tall as a gay man in the face of what was surely a painful reckoning with his own colleagues in the democracy movement. But he had a vision that one day, people would understand that human rights are defined by the first word — human — regardless of race or sexuality or the various identities people use to define themselves," said Hallacy.

"All forms of love — altruistic love, love of family, love of community, love for truth and life based on respect and understanding — are the foundation for change in any society. This is what has sparked Myo Min's decades of tireless work for the voiceless and unseen in Myanmar and I believe his message has global resonance."

The filming of This Kind Of Love marked Hallacy's return to Myanmar after her last visit 15 years ago. To her, the atmosphere was different.

Burmese people are now more outspoken compared to when she visited in the 1990s — a time when it was more risky for people to share their experiences.

"There's still risks that human rights defenders like Myo Min face. In many ways, it is more sinister now than before the political transition began because there are more shades of grey in the political scenario. The trend of attacking and threatening people like Myo Min on social media and in other forums is just as dark as during the overt dictatorship," revealed Hallacy. This Kind Of Love mixes traditional dance and poetry into its style of documentary-making. Myo, a trained classical Burmese dancer, also performs the dance on screen.

"We were in a rundown warehouse studio without windows or fans in intense heat. Myo Min was layered in miles of silk and thick make-up and we were all sweating inside and out," recalled Hallacy. "Every time I see the dance in the film it moves me."

While the emotional dance remains a fond memory from filming, it was the scene of Myo's reunion with his mother at the airport in Myanmar that is most memorable for her.

"When Myo Min touched his homeland for the first time and saw his mum amid screaming students adorning him with flowers, he hugged her in a moment that was so filled with unspoken love, tears, and humanity," she said.

With Myo Min being exiled for 24 years from his family and friends, one may wonder if it was actually worth it for him. But the activist himself has never regretted the path he chose.

"I feel I have a responsibility to do this work and give back to people and also empower others to have chances, exposure and opportunities."

This Kind Of Love will premiere at 7pm next Wednesday at the FCCT, Maneeya Centre Building (take BTS Skytrain to Chidlom Station). Free entry for FCCT members. Tickets for non-members cost 350 baht. Hallacy will be presented, with Aung Myo Min joining in a Q&A session via Skype. Contact the FCCT at 02-652-0580. 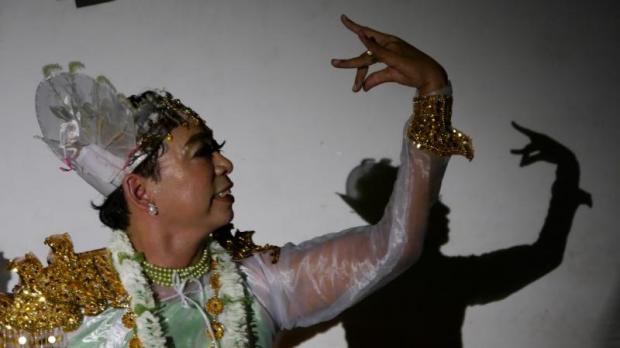 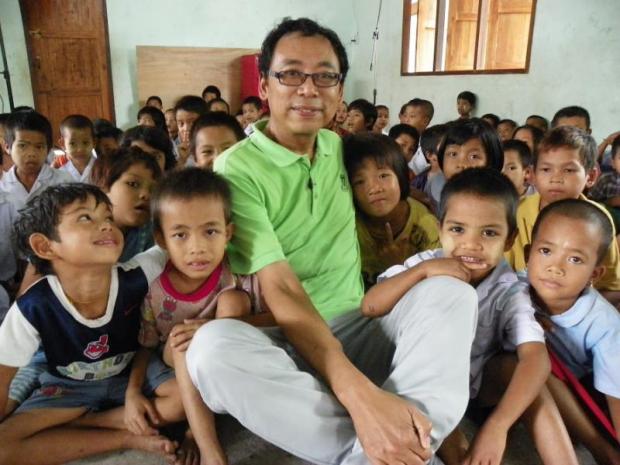 Aung Myo Min with a group of stateless children. 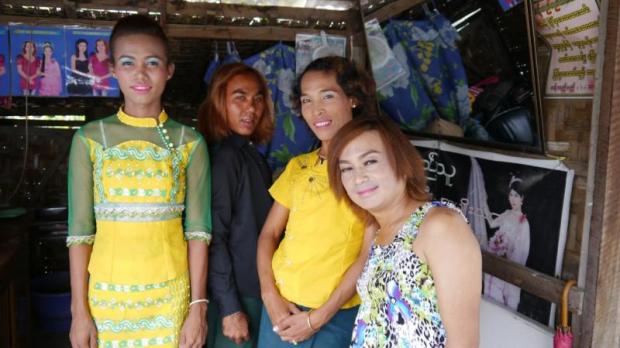 A group of Burmese transgenders who are featured in the documentary film.