Queen of the Dolomites hosts the biannual gathering of the Italian leading wine producers, with an extraordinary programme of masterclasses, seminars and unique high-altitude wine tastings

One of Italy's most prestigious wine events, VinoVip Cortina 2015 took place recently at Cortina D'Ampezzo, a famous tourist town situated amid the Dolomite Alps in the Veneto region of northern Italy. The town, nicknamed "Queen of the Dolomites" is one of Europe's most popular ski resorts with its magnificent Unesco World Natural Heritage landscape.

Organised by Alessandro Torcoli, publisher and editor-in-chief of the leading Italian wine magazine, Civilta del bere, in collaboration with the Italian Trade Agency and Vinitaly, this exclusive biannual wine summit, now in its 10th edition, ended with great success in showcasing 55 of Italy's top wines -- from Sicily to Trentino -- to the world. Nearly 5,000 bottles of wines were uncorked during the three-day gathering that attracted international experts, professionals, Masters of Wine, buyers, wine lovers and journalists from 10 countries -- leaving an immense satisfaction on their palate and wonderful memories of the breathtaking Dolomites.

"This year we celebrate the 10th edition of VinoVip Cortina with an exciting programme," said Torcoli. "These three intense days will allow us an opportunity to experience great wines offered by our 55 producers as well as those from prestigious international labels. We will taste 220 red, 98 white, 58 sparkling, eight rosés and 20 grappas, served by 71 sommeliers from Veneto, and at the same time, attending seminars with Masters of Wine, talking about providing education and training in wine in our country."

The 2015 events featured a picnic at one of Europe's highest vineyards, high-altitude wine tastings, masterclasses conducted by Masters of Wine, blind tasting competition, and meetings with Italian leading wine protagonists. A wide range of issues related to wines were also discussed, including sustainability, organic farming, renewable energy for wineries, current trends in the wine sector and the needs of the consumer.

The event kicked start with a picnic at the Cortina Vineyard, "Vigna 1350", an experiment project located 1,350 meters above sea level. This vineyard project is managed by oenologists Fabrizio Zardini, Francesco Anaclerio and Gianluca Bisol, who demonstrated that it is possible to grow grapes in the high mountains. 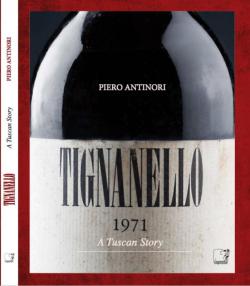 "Tignanello: A Tuscan history", a book by Piero Antinori.

Vigna 1350 is a challenging scientific project, according to Zardini. Vines grown at higher elevations have greater potential for excellence as the fruit tends to have deeper colour compounds and higher levels of tannins resulting in more concentrated flavours, which are vital to a wine's character.

This 2,400m² experimental plot contains 2,000 rooted cuttings of four grape varieties which are left to expose to intense sunshine and UV rays, winds and day/night temperature difference of mountain region. Since the project started in 2011, the vineyard had gone through many extreme weather conditions as if to prove its survival.

"The heavy snow last winter has left its mark but the reconstruction work was impressive and the vineyard is completely renovated and missing plants replaced with new cuttings," said Bisol, the project manager. "We are still learning to cope with the rigours of the high-altitude wine growing. But after what we have experienced, we are confident that Vigna 1350 will become an interesting testing centre for winemaking in high altitude and capable of creating delicious blend of wine from heroic viticulture."

Another interesting programme was the "Piero Antinori: 50 years without going out of time", a conver-tasting session with the highly-respected Piero Antinori whose extraordinary career has made him an undisputed leader in Italian oenology and widely recognised as the ambassador to the world for Italian wines. At present, Piero Antinori is also the honorary president of the Istituto del Vino Italiano di Qualità -- Grandi Marchi (Institute of Fine Italian Wines -- Premium Brands). The full-house session took place a the legendary Miramonti Majestic Hotel and was conducted by Torcoli.

The Antinori family has been making wines for over 600 years. Today the firm is operated by Marquis Piero Antinori with the support of his three daughters, Albiera, Allegra, and Alessia. Tradition, passion, and intuition have been the three driving principles which have led the firm to become a leader in Italian wine.

A trendsetting winemaker and a consummate businessman, Piero Antinori firmly believes that great wines of special character could be produced from a blend of international varieties such as cabernet sauvignon and cabernet franc, with native sangiovese. In 1971, he introduced Tignanello, the first red wine blended with non-traditional varieties in Tuscany. It caused a sensation by its use of cabernet sauvignon and cabernet franc in a sangiovese blend. The wine was a great success and also creating a new Super Tuscan category for the industry. 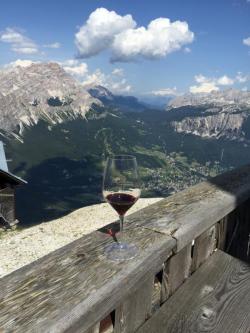 Rifugio Faloria at 2,123m with the breathtaking panoramic view of the magnificent massif.

Tignanello has ever since become a revolutionary wine both in Italy and abroad that even today, after more than four decades, is "the most influential wine in the history of Italy", according to Wine Spectator magazine. Early this year, Piero Antinori also launched his new book, "Tignanello: A Tuscan history" dedicated to Tignanello, the first and most famous Super Tuscan wine of Italy.

"We have demonstrated to the world that Italy can produce excellent wines that showed both class and breed while maintaining their original character," he said. "So, apart from following strict standards, we need to constantly improving our profession in various fields such as selection of proper clones, new growing techniques and fermentation methods, researching the effects of altitude on the vines, study of the wood, size and age of the barrels, and varying the length of bottle ageing.

"No less important has been advertising, because quality, once achieved, must also be transferred to the market. This has meant a great commitment in travelling to foreign markets and taking part in events, fairs and establishing contacts and good relationships not only with experts in the sector, importers and customers, but also with the international mass media," he said.

Guado al Tasso Vermentino Bolgheri DOC 2014: The wine is crafted from 100% vermentino from the Tenuta Guado al Tasso vineyards near Bolgheri on the Tuscan coast. A luminous straw yellow colour with greenish highlights, the wine shows aromas of minerals, citrus fruit, and flowers. It is a fresh wine, balanced, with a long finish and aftertaste. 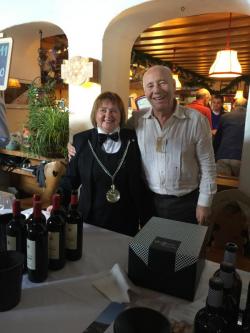 The wine tasting delle Aquile at Rifugio Faloria supervised by sommeliers from Veneto.

Cervaro della Sala, Cervaro della Sala, Umbria IGT 2013: A blend of 90% chardonnay and 10% grechetto, this wine demonstrates a Mediterranean character of vigour and crispness. The palate is mineral with buttery vanilla notes which blend elegantly with flavours of tropical and citrus fruit.

Villa Antinori, Chianti Classico Riserva DOCG 2012: A blend of 90% Sangiovese and 10% cabernet, this ruby red wine shows a nose of elegance and finesse marked by aromas of red fruit. The palate is soft and supple with solid tannins, while the finish and aftertaste are both long and focused.

Tenuta Tignanello, Tignanello Toscana IGT 2012: This intense ruby red with purple highlights wine is crafted from 80% Sangiovese, 5% cabernet franc and 15% cabernet sauvignon. It is potent and complex with spicy notes which mingle with aromas of red fruit and liquorice. The flavours are mouth-filling and elegant with much volume and a balance in the texture. The oak is perfectly fused in the spicy and fruity finish and aftertaste.

Two of VinoVip Cortina 2015's wine tastings impressed all participants. The first was the "VinoVip Vintage", a staggering tasting to celebrate its 10th edition at Tofane (Rifugi Col Drusciè and Ra Valles). It was a once-in-a-lifetime occasion to taste great wines from the 1997 and from other historical grape harvests at high altitude of 3,000m. Tofane is situated at an altitude of 3,244m and can be reached via a cable railway which makes the first stop at Rifugio Col Drusciè (1,778m) before continuing to Rifugio Ra Valles (2,475m). At the top, a deserved toast was made amid the breathtaking panoramic view of the magnificent massif.

The second tasting was the walk-around tasting at Rifugio Faloria at 2,123m, overlooking the beautiful Cortina's wide valley. Here, 55 producers offered three wines or spirits among the most representative of the summit, unknown vintages included -- a breathtaking tasting of 175 gems, professionally served by a team of sommeliers. On the terrace were cigar tastings curated by Spazio Fumoir, surrounded by the amazing Dolomites landscape.

Today, the US is the most successful market for Italian wines. Italy dominates the US wine market not only in quantity and in value, but also in the number, selection, variety and quality of the wine. According to the Italian Wine & Food Institute, Italian wine exports to the US will exceed $1.4 billion in 2015, and top $1.7 billion with the inclusion of Italian sparkling wines. Australia is the second exporter of wines to the US, followed by Chile, Argentina and France.

For the first half of this year, Thailand's import of Italian wines valued at $1.8 million, and $0.5 million for sparkling wine. 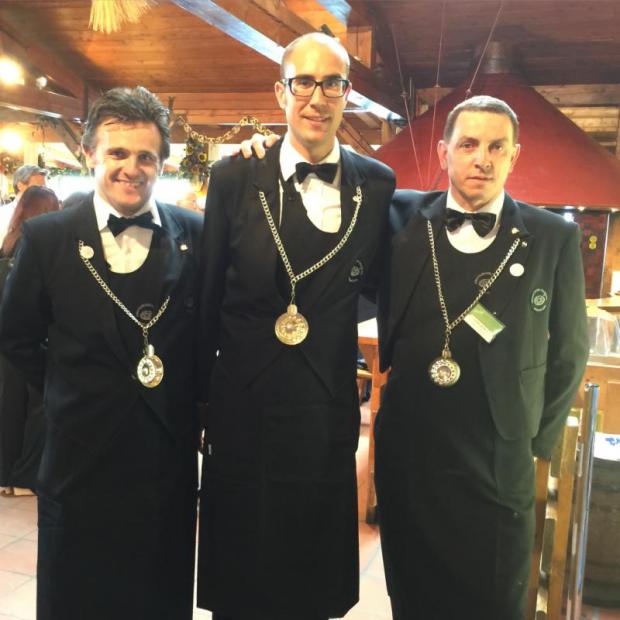 The sommelier team from Veneto. 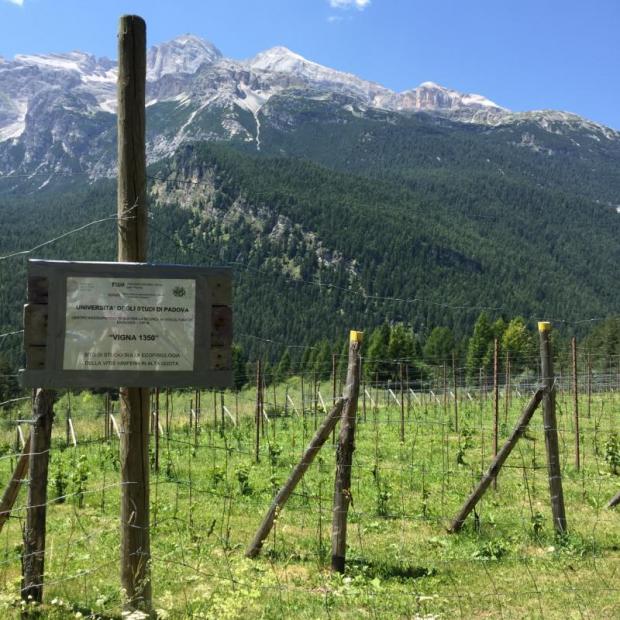 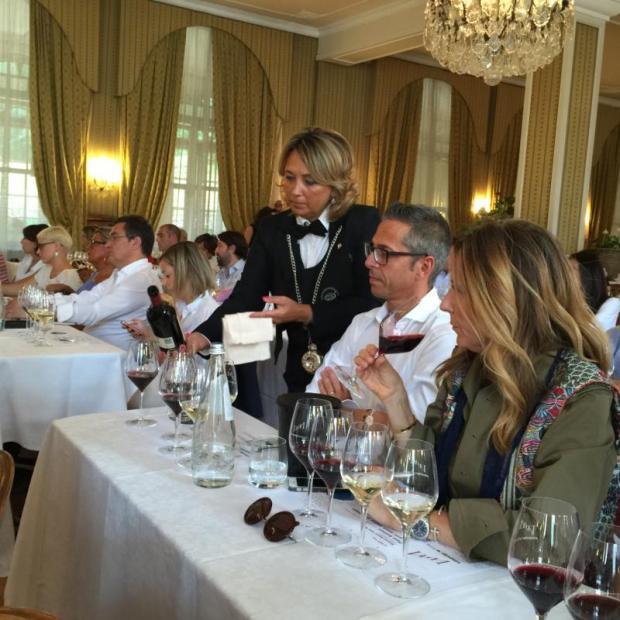 One of the professional wine tastings at VinoVip Cortina 2015 at the legendary Miramonti Majestic Hotel in Cortina D'Ampezzo. 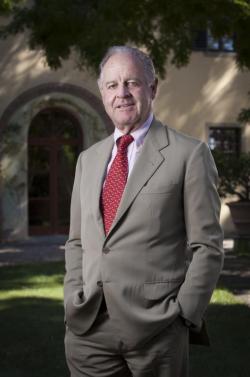 Marquis Piero Antinori, widely recognised as the ambassador to the world for Italian wines.