Selfies and studies come together as thousands of Chinese tourists drop in on Chiang Mai University.

‘Wait, wait, wait!” A woman in a purple Chiang Mai University polo shirt yelled at a group of motorcyclists, who roared into the campus at such speed one visitor’s scarf nearly flew off. The CMU officer waved her arms in an effort to make them stop, and for a moment it appeared she might grab the scarf and pull it and the woman wearing it from the back of the bike. 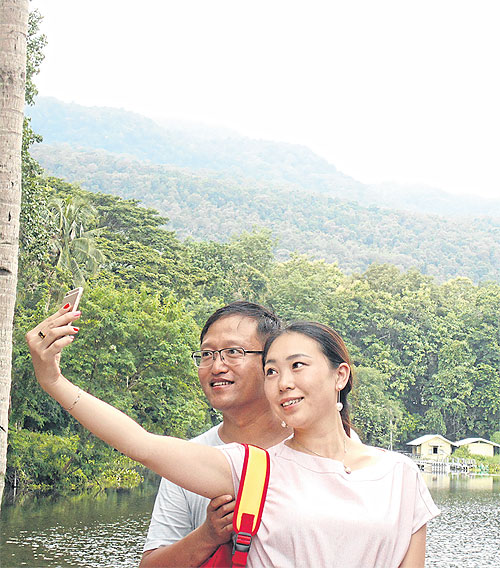 “Hello, hello, stop, stop!” The female officer shouted, almost screaming. Other campus staff members ran out to help stop the group of five or six motorbikes, and finally the riders slowed down and turned round. After gestures and cross-cultural explanations, the tourists left the bikes in the car park and crossed the street to buy tickets at the Visit CMU counter.

Visit CMU was set up by the university in July last year precisely to deal with this kind of guest. For the past couple of years, there has been a phenomenon of Chinese tourists storming the campus and disturbing what should be a peaceful and quiet learning environment. Its premises and buildings are built on slopes of greenery that are perfect for photo opportunities, with Doi Suthep providing the backdrop.

Following the launch of Visit CMU, 70,000 visitors were recorded from July to December 2014. For the first eight months of this year, that number spiked to almost 130,000.

But still, it’s only a university campus.

The Chinese comedy Lost in Thailand, released in 2012, was initially blamed for the influx of visitors because the film is set around Chiang Mai and CMU. But three years on, the popularity is less about the craze over the film than word of mouth and the social media buzz the first wave of tourists generated. The university, along with other attractions in the province, has become emblazoned in the Chinese tourist psyche as the visit of a lifetime.

Jia Shao Jun, 45, and wife Tian Qing, 28, from Shanghai, came to Thailand for the first time this month. They chose to visit CMU because it is recommended on one of China’s largest travelling websites, ctrip.com.

“Chiang Mai Da Xue [University] is recommended on the website. From seeing it today, we think it is beautiful.”

Mr Jia is one of the new wave of Chinese tourists, post-Lost in Thailand, who did not know how CMU’s popularity began but decided to come because of its exposure in Chinese media.

Perhaps he, along with the Chinese teens on motorbikes, can bring a breath of fresh air to Chiang Mai’s tourism and hospitality sector. However in recent years, the city has been a focal point for complaints from locals and national media. The litany of complaints against Chinese tourists is long: they are accused of defecating in the moat, lacking English and road safety skills, having bad manners, making loud noises, refusing to flush toilets, littering and spitting.

In short, Chinese tourists have a reputation for being rude. Their presence disturbs the harmony and grace of the 800-year-old city, say locals. They are not to be welcomed. But the businesses love their yuan.

Visit CMU tickets cost 60 baht per person for a 15-minute ride on a small green electric shuttle which can handle 15 people at a time. Visitors are not allowed to get off until the last stop, at the iconic campus reservoir Ang Kaew.

At Visit CMU’s counter at the front gate, tourists, Chinese or otherwise, sip coffee while waiting for the shuttle at a platform. CMU does not shy away from the fact that all they do is manhandle the visitors. Their reasons are justified. 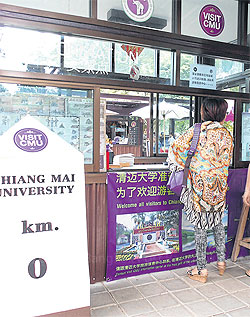 “About two years ago, the numbers of Chinese tourists who visited CMU was at the point where we couldn’t cope,” explained Pongruk Sribanditmongkol, CMU’s vice-president for planning and development.

“CMU executives received complaints from students that Chinese tourists riding motorbikes stopped in the middle of the road, without indicating, without slowing down and without pulling over. Many cars hit them because they didn’t know the tourists wanted to stop and take photographs there.

“They visited the canteen during lunch break. Students who had to go back to their afternoon classes complained that the seats were all occupied. Sometimes, snack sets given out during seminars were taken by Chinese tourists who wandered into the buildings.”

Mr Pongrak said CMU was never meant to be a tourist attraction, and still isn’t. However, shutting the gate to tourists altogether would not be diplomatic.

“The executives realised this could affect international relations so we had to turn the crisis into an opportunity. We have tried to reach a compromise. If we prevented tourists from entering altogether, Chiang Mai tourism would be affected. But they cannot just walk around either.”

A number of tour packages are offered. One is a one-day tour of Doi Suthep, Chiang Mai Zoo and CMU. All are major provincial venues and are situated on the same road.

GO BY THE RULES

Still, there are only six electric shuttles operating on campus. Mr Pongrak said CMU is waiting for the numbers to stabilise, though during Lunar New Year, the numbers of Chinese tourists reached 1,000 a day.

On the quiet mid-week day that Brunch visited CMU, the shuttles were running smoothly. The 15-minute tour covering a 4km ride can be extended a little if visitor numbers are not too high. However, in the afternoon, as buses delivered more tourists, more shuttles cut their journeys short, which meant less time for selfies at Ang Kaew.

Nobody seemed to mind. Many of the Chinese tourists Brunch encountered during the ride were young, friendly and spoke English. And if they didn’t, they kept smiling.

“We have tried to put up rules in the CMU premises and we have found that Chinese tourists comply,” Mr Pongrak said.

“We used to put up Chinese-language signs in the canteen asking them to return the dishes to the sink after they finish eating, and they comply.

“Here and at Visit CMU, no Chinese tourists have complained that we didn’t let them off the shuttle or anything. We try to use this opportunity to show them Thai culture, asking them to remove their shoes when entering the shrine, for example.”

The Visit CMU scheme essentially pays for itself. Mr Pongrak said the project needs about 400,000 baht per month to run a ticket counter, a coffee shop and a souvenir shop. There is also a playground for children and dedicated toilet facilities. All of these are located in a neatly maintained grass area to the right of the entrance gate, with a vast, shady space making for a great photo opportunity.

A purple model elephant and even the simple chairs in the coffee shop are also popular selfie spots. Everybody takes photos with everything before turning their heads down to their smartphones and posting them to the internet.

At Ang Kaew, a group of first-year students were sitting down to do their homework. They needed to concentrate but the arrival of the shuttles prevented them. They didn't seem to mind.

One student, 19-year-old Guifang Saefong, turned to a group of Chinese tourists and spoke quickly in Mandarin. The tourists were obviously impressed.

“My parents are Chinese, but I was born in Thailand, in Mae Hong Son,” said Ms Guifang, a humanities student. “There are huge numbers of them every day at this spot because it is the most beautiful view here.”

Her friend, fellow first-year Supakij Tanduang, 19, also speaks fluent Mandarin. He is from the southern province of Surat Thani but his family moved to Chiang Mai a couple of years ago. He first started learning Mandarin during the last three years of high school because of the surge of Chinese tourists in the province.

“Local residents complain about Chinese tourists but we have to understand they drive in the right lane there in China, unlike Thailand,” Mr Supakij said of the negative sentiment towards the visitors. “We have to bear in mind that tourists tend to rent bikes because the red public pickups sometimes charge them more than they are supposed to.

“Thailand is a really laid-back country to begin with, compared to, for example, Singapore. We never felt the need to lay down any rules because we have a smaller population compared to China.

“China has 1.3 billion people; if 100,000 of them come here it is still a relatively small number, even if Thai people think that’s overwhelming. Thailand and China are different places with different values.”

Recent electrical engineering graduate Vicky, 23, arrived from Guangdong with a group of friends to see an alternative university experience. “We just want to come and see the CMU student uniform because there’s no such thing in China,” Vicky said. “The nature here is also very beautiful.”

Operating 12 hours a day, seven days a week, the Visit CMU tours will hopefully satisfy tourists’ curiosity. “At first, we thought of stopping the shuttle service at 4pm, but Chinese tourists might want to come in after that, so we decided to open from 7am to 7pm each day for an average number of 200-300 tourists a day,” Mr Pongrak said.

In 2012, an astounding 2.78 million Chinese tourists visited Thailand, taking the top visitors ranking from Malaysia. The first time Chinese visitor numbers passed the million mark was in 2006, and in six years that number had nearly tripled. It is partly because of Thailand’s popularity, but also because China has become more open and affluent in recent decades. In 1988, only 33,344 Chinese visited Thailand.

According to CMU research, 90% of Chinese visitors are university graduates and most are from Beijing and Shanghai. Most represent a break from the traditional package tour operations. The CMU paper said earlier research showed only 19% of Chinese visitors travelled independently to Chiang Mai in 2005. In its 2013 survey, the university found 90% of Chinese tourists were coming to the city without a tour operator. Almost all — 98% — of respondents said they would return to Chiang Mai because it is an “affordable trip, nice weather, and a lot of fun”.

“We have created an interaction and chain reaction here,” Mr Pongrak said. “Students and volunteers can help out here. We have about 300-400 Chinese students each year who come to learn the Thai language.

“We can still handle these tourist numbers with the personnel and resources that we have. But if the numbers go up to 2,000 a day in the future, we will think again then.” 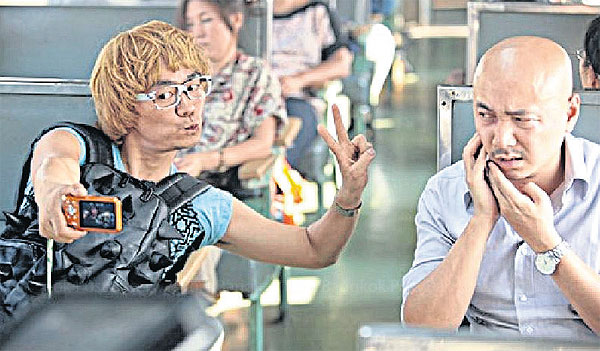 trend-setters: The film 'Lost in Thailand' is held responsible for the surge in tourism.

pretty as a picture: Ang Kaew reservoir is the only stop on the tour, and Chinese tourists make the most of their time there. 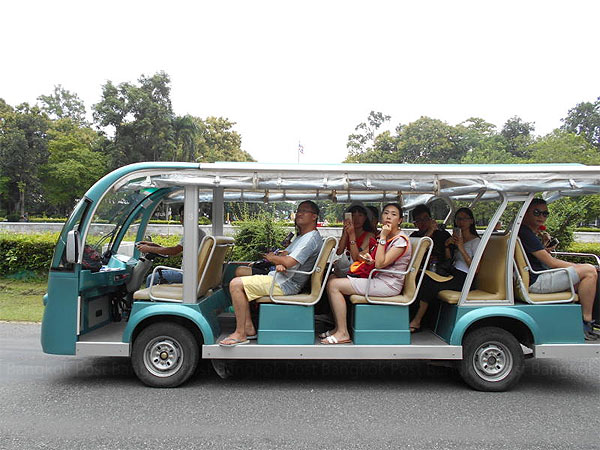 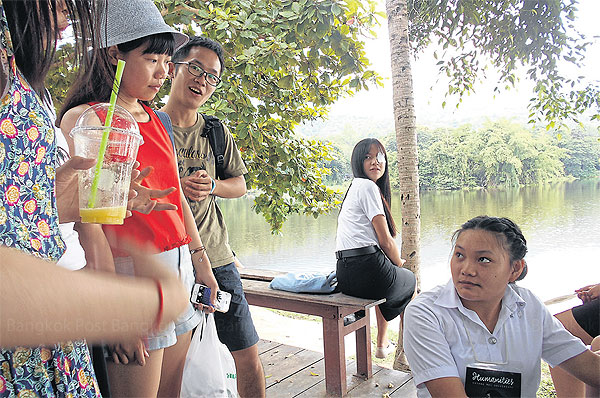 Cross culture: humanities student Guifang Saefong impresses the visitors with her Mandarin skills. Far right, some students pose with tourists. The uniform is an attraction for recent Chinese graduates, who say they have nothing similar at home. US artist examines the art behind architecture

NFTs in spotlight at RCB auction