Sweetened condensed milk is one of the staples of the Thai kitchen. We pour the gooey, creamy goodness on roti, bread, coffee, tea and more -- even topping it off with sugar sometimes. Its sweetness is liked by both children and adults. We can buy a can for about 20 baht in practically every shop that sells general goods. 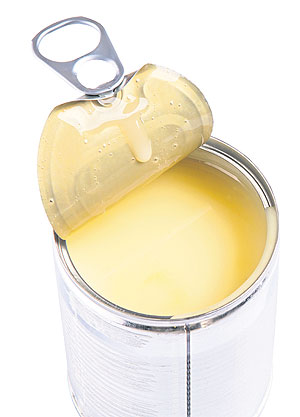 In the past, different countries producing lots of fresh milk would convert their products into either powdered or canned milk for ease of storage. The producers would evaporate the water out by half, with the milk ending up twice as thick. This is packed into cans. To consume, the evaporated milk is mixed with an equal amount of water to bring it back to its original condition.

Originally, sweetened condensed milk was made with 55% evaporated milk and 45% sugar.

As technology continued to develop, producers also started to become smarter (or sneakier) with their recipes. In sweetened condensed milk, milk fat is now being substituted with palm oil to reduce the cost of production. The removed fat is used to make cream and butter which can be sold at a higher price compared to milk.

The non-dairy creamer -- or artificial creamer -- led to a booming business. According to Assoc Prof Dr Visith Chavasit, director of The Institute of Nutrition at Mahidol University, the product is nothing but saturated fat mixed with flour (glucose syrup) and added milk protein. To sum it up, for both sweetened condensed milk and non-diary creamer, there's barely any milk in them any more.

Based on our observations, there are comparatively more creamers than milk products available on the market. They are sold in similar packaging and have a similar price. Without carefully reading the label, one can be mistaken for another easily.

"With the words 'non-dairy creamer' and 'milk product', manufacturers can avoid the law. They can pretty much put anything inside. On the contrary, if the product is advertised as solely 'milk', there's a set regulation as to how much milk needs to be in there," he said.

While the amount of sugar still keeps to its original 55/45 formula, it can be seen that the amount of milk has been reduced by a large margin. The change has been slow but progressive, and even now a lot of people still don't know what they're consuming every day.

"Technically, the manufacturers are not breaking any laws. They're just tweaking with the wording and going with the loopholes they can find. And the bad thing is people just don't understand the differences," said Visith. "People need to be aware that these products are not what they used to consume, even though they still retain the same taste and texture."

Still, Visith added that it also depends on why consumers are using these products. If they are aiming for a better taste in their drinks and desserts, then perhaps they're not expecting a lot of nutrients in the first place.

"But to think that some people may be mixing that 'milk' with water to feed their kids then, obviously, they're not getting as much benefit as they'd get from real milk," added the nutritionist.

It's quite problematic when consumers don't read labels. Worse, sometimes they read them yet don't understand. Modified wording by the manufacturers is only continuing to make consumers' lives more complicated.

"Our technology is getting better each day. Manufacturers will also find more ways to tweak recipes, as well as the words on packaging. Perhaps the authorities should find a way to make consumers understand better. I feel it's their job to make these labels clearer and more understandable according to people's knowledge base," added Visith.

The nutritionist suggests consumers look after themselves when they go shopping. The solution is simple, really. Just read the labels. These sweetened liquid goods -- regardless of what people still call them or know them as -- come with excessive sugar, saturated fat and cholesterol. They should be consumed in moderation.

"If you feel that you need to consume these products at least choose the brand that offers the higher percentage of milk," added Visith. "You could still get some calcium and protein from it, though a relatively small amount. Also, do check the amount of fat. Go for the one with less saturated fat."