Cycling in the name of love
Life
Social & Lifestyle

Cycling in the name of love

Briefly passing through Thailand, an 18-year-old Briton is travelling around the world for charity

Callum Fairhurst made two promises with his older brother Liam who, in 2005, was diagnosed with a rare cancer (synovial sarcoma) in his leg. Although initially defying the odds and the doctor's expectations, the cancer eventually spread to his brother's lungs and four years later he succumbed at 14 years old.

"I made Liam two promises. The first was to live a great life and the second was to help others," Fairhurst said.

Motivated by the promises he made, the 18-year-old Briton is cycling across the continents for charity. He set up Challenge 360, which is basically a cycling journey for a good cause while also seeing the world. The funds from Challenge 360 will be directed through the Liam Fairhurst Foundation, a registered charity founded by Fairhurst that helps disabled and ill children in the UK and the various countries he cycles through, including international charities like Free the Children and the late American actor Paul Newman's Serious Fun Network.

Fairhurst arrived in Thailand last month. For the first time on his adventure, hundreds of local cyclists rode alongside him and he was accompanied by police escorts from the southern province of Surat Thani up to Bangkok, where he was joined in the streets by people riding bikes, on roller blades and even electric unicycles. He spoke to multiple groups of students at Harrow International School as well as cyclist groups, raising awareness about helping underprivileged youth.

At the end of his long days cycling he usually rests in his room for the evening, but his time in Thailand has been unique.

"I've had groups of people knocking on my door at night, saying let's go on a tour, let's do this. So we've seen local tourist sites like desolate beaches and temples. I just wouldn't have been able to see Thailand without the support I have had." 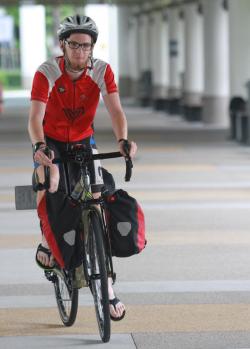 Fairhurst's late brother fundraised incessantly through the last years of his life, collecting more than £340,000 (18.7 million baht) by the end. Encouraged by his brother's efforts, every year Fairhurst seeks a new way to canvass on behalf of others, and this year his goal is around 29,000km.

He began his journey from Downing Street in London four months ago and has since made his way through Australia, New Zealand, Indonesia, Singapore and Malaysia. To raise awareness of issues facing youth, including cancer, he tells his and Liam's story to locals with the hopes of inspiring them to help others, however they can.

After two weeks in Thailand he had to move on, so he began his ride to Cambodia, where he will continue to face the elements as he then carries on through Vietnam, India and then Europe.

He's been through six countries so far, but prior to Challenge 360 he said he didn't actually have the "cycling bug". In fact, he didn't catch it until he was well into his ride when he began to think that perhaps cycling was the best way to see the world.

Of course there are more conventional ways to travel, he said, but he would not be able to meet as many people as he does when he is on a bike.

"It's when you're struggling up a hill, having a really long day and really exhausted that someone, even if they don't speak my language, has helped me. I've met their families and eaten the foods and experienced the real countries."

A few nasty sunburns, an injured toe and some minor repairs aside, Fairhurst and his bike remain in good condition, but the teen is quick to admit he was not as prepared for the adventure as he initially let on. 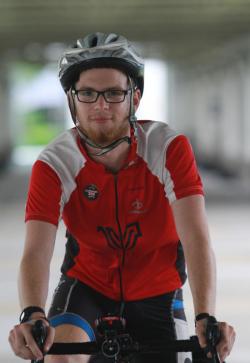 Grinning, the teenager described how he embarked on Challenge 360 with only an idea, a world map well-dotted with pins, and the promise to his parents that he'd be home for Christmas before embarking on the American leg of his journey.

Fairhurst said he plans to persevere against all challenges that are sure to arise until he reaches his final destination in New York.

"There's not been one point on this ride when I have said I want to give up right now, but there have been points when I've wondered why I am even doing this."

However, on those days, he remembers how his brother turned even the worst of negatives into positives, and thinks of those who have reached out to him after learning they were helped by his foundation. He said he also finds solace in supportive strangers on the road.

"I've seen some amazing sights -- camping out in Australia where migrating whales are in front of us and the sunset and kangaroos and wallabies and koalas or the brilliant temples in Asia or mountains or beaches. I've seen so many incredible places but it isn't about the places I've seen. It's the people I have met."

"Liam was unusual, but I'm certainly not unusual. A lot of people go out there and help and they don't get the recognition that I have."