Let's maximize TK Park while it's still around to light our fires and fill our buckets. The idea of it having to shut makes us want to start a war -- and it must be a coincidence that their current exhibition, "14-18", happens to be about one too. 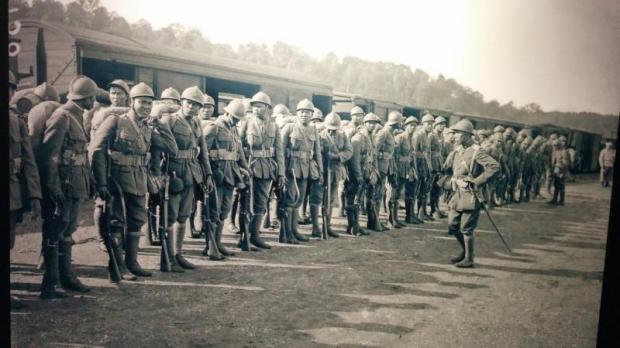 In a partnership with the French Embassy in Thailand and Institut Francais, one part of the exhibition centres around never-before-seen photographs of Thai soldiers who were sent to France during the Great War.

These black and white snaps, owned by France's Ministry of Defence, are a stunning look into the obscure role our countrymen played in one of the world's most significant historical moments a century ago. 1,284 men volunteered, mostly falling into the positions of pilots, medics and tank drivers. Around 20 lives were lost, but it is said to be an intelligent move made by King Vajiravudh that solidified the Thai-French alliance.

"There was both good and bad that came out of us taking part in World War I, but most of it was good," said Dr. Tatsanai Wongpisethkul, executive advisor of TK Park. "It was an important time in Thai history because we went through a lot of change, whether arts or culture, society or lifestyle. We were seen and became more involved in world politics after this involvement in the war and other countries started to become more interested in what our stance was regarding world issues." A short silent film with footage of the Thai soldiers and their journey to and while in France is also screened in a back room. The main display, however, is the "14-18" exhibition, which requires that you bring along your mobile phone. Download their free application, IF1418, and use it to scan the QR codes that are scattered all across the artworks on display. Arranged chronologically by year, from 1914 to 1918, each particular code brings fascinating quotes, photographs, videos and hard-to-find artwork relating to World War I to your little screen so you can read or look at pictures at your own pace.

If you'd like to dig deeper, two different talks will be held on the following Saturdays. Tomorrow, the topic will be cultural treasures from World War I, led by Mathias Gross, a French historian, and several professors from Chulalongkorn's Faculty of Arts. On Saturday the 21st, you'll be hearing about interesting facts about World War I, by World War I Fan Pan Tae champion Krisna Klaiboonmee and Pluetiphol Prachumphol, founder of Thai National Flag Museum. Both talks will be held at TK Park, from 2-3pm. On Sunday 15 and 22, TK Park teams up with the Film Archive to screen Rak Siam Tao Fah (Love Siam As Much As The Sky), a movie about Thailand's history during World War I. The film will be showing at 2pm on both days.

"14-18" is currently on display at TK Park, CentralWorld until Nov 22. Visit www.tkpark.or.th.